The strawberry plants are so happy now that the spittle bugs are gone. 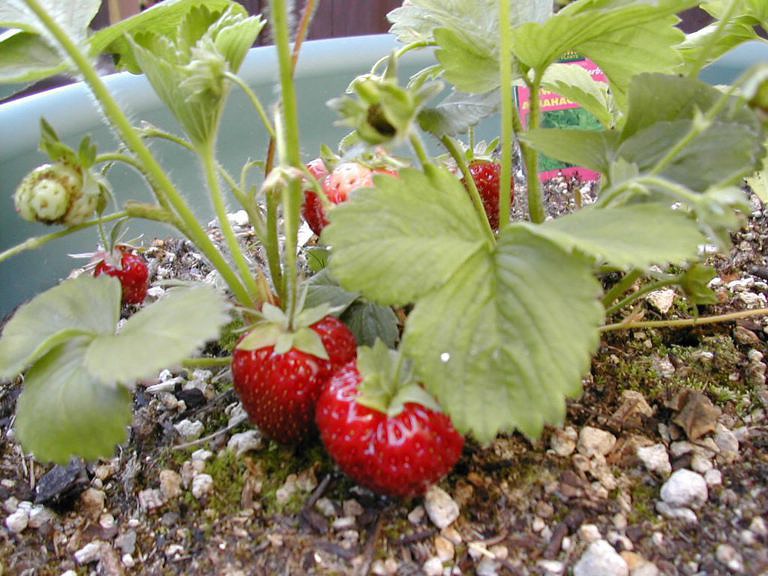 Don’t they look delicious? We split three Friday night after work, and they were wonderful. Strawberries are always good, but the small, real ones are just so sweet.

(An aside: Can anyone identify the line “and one perfect peach”? It keeps coming into my head whenever I look at the fruit on this plant, and I can’t track it down. I suspect it was a children’s book that got read a lot when I was little, because the tempo that my brain keeps repeating it with seems very deliberate. Memory is so interesting.)

Our yarn swap on Wednesday was lots of fun. I had very little to contribute, but was very delighted to find some very pretty yarns.
First, sock yarn from Suzanne! Lorna’s Laces in a colorway I’ve been admiring for months, and a skein of Knit Picks’ Shimmer that reminds me of violets. 🙂 How pretty! I’m so excited. 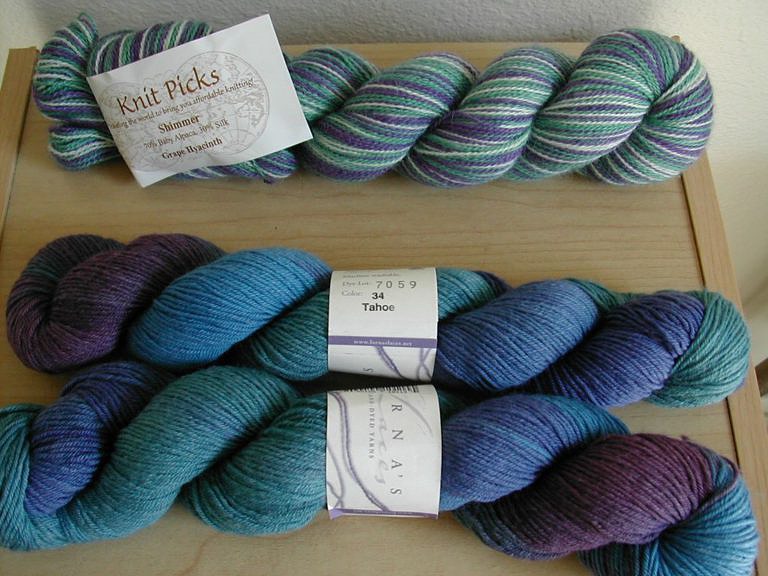 Then, a skein of Noro’s Lotus, which is not my usual yarn type or color preference, but it was speaking to me so I bought it from Juli. I love the contrasting shiny bit that threads through it. Very lovely. Perhaps it’s destined to be accents on a slouchy bag? I have to ponder it a bit. 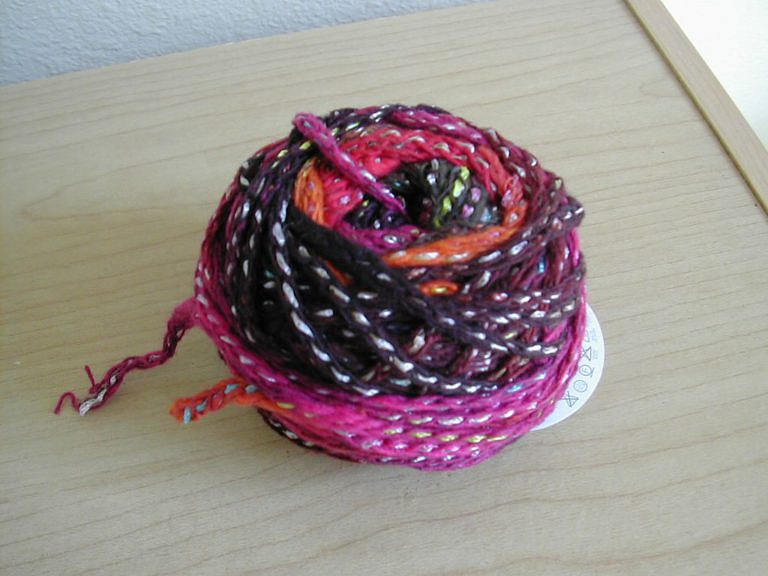 Then, I had 3 extra skeins of Madil All Seasons from my 2-skein Branching Out (due to wild overestimation of the yarn required), which Pam offered to trade this for: 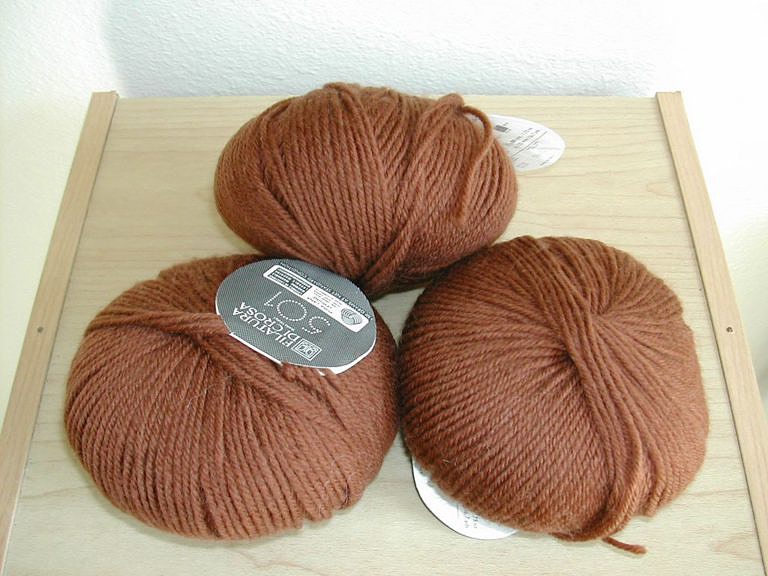 It’s 1620 yards of light brown 4.5 st/in machine washable wool. (I didn’t include the other 9 skeins in the photo). She said that it had been lurking in her stash for years. It’s definitely not my typical color, but it’s been appealing to me since she left, so I’m curious to see what pattern jumps out for it. Perhaps something with a shawl collar?

Given that a horde of knitters are coming over tonight for a yarn swap and space will be at a premium, I finally finished porting the files from my old computer so that it could be recycled.

My grandparents gave it to me when I went to college, thus making it the first computer that I didn’t share. It’s lived in three different states. It was my communication link to friends and family through college, during my first job in Boston, and through switching coasts and moving to Seattle. It’s seen zillions of emails and the creation of a blog. It wrote (sadly not without substantial late night help) 8 semesters worth of papers and coding assignments. It’s held ~1700 mp3s, 5 versions of tetris, an old version of SimCity, and the ever-important Snood. It withstood the beginnings of my computer-tinkering, accepting a new hard drive, cd burner, and OS. It was the last thing I disassembled when moving, and on arrival was generally reassembled before I finished unloading rest of the boxes from the car.

With this in mind, I’ve been putting off the final port of files, and the inevitable dumping. Last night, as its hour drew near, I was feeling very sad about abandoning it after its seven years of service. But then I turned it on and sat through the 8:12 minute boot, and the freezing explorer window, and listened to the loud fan, and remembered why I felt it was time for it to go. So, here’s one last picture for posterity: 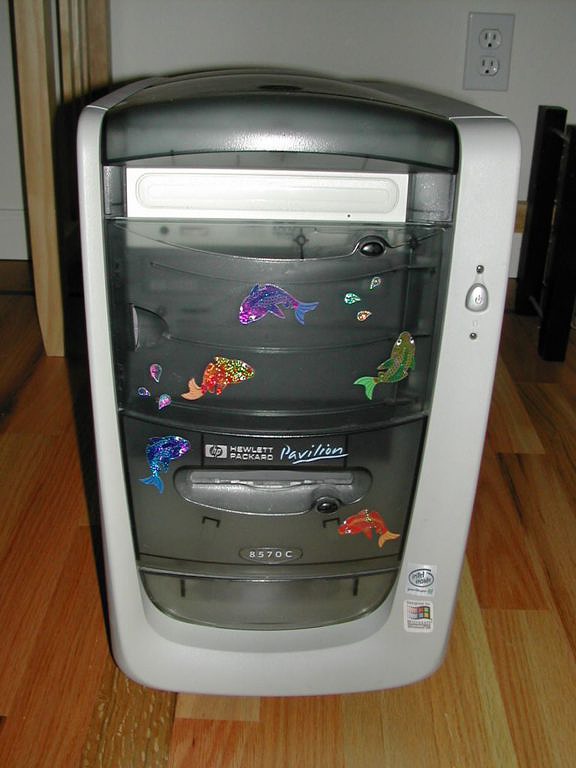 (PS, I was also holding off after reading quite a few articles about how many of the “PC Recycle” centers here actually just sell the trashed computers to China, where they are burned, which leaches all sorts of terrible chemicals into the atmosphere, ground and water. A bit of Google-work later, I was happy to find the Take It Back Network, which provides a web of locations that will take computers, monitors, printers and peripherals, usually for a nominal fee, and dispose of them responsibly and locally/nationally under US environmental regulations. Even better, Staples provides this service nation-wide, for those that aren’t in the Seattle area.)

I was very amused to find this postcard in our mailbox yesterday: 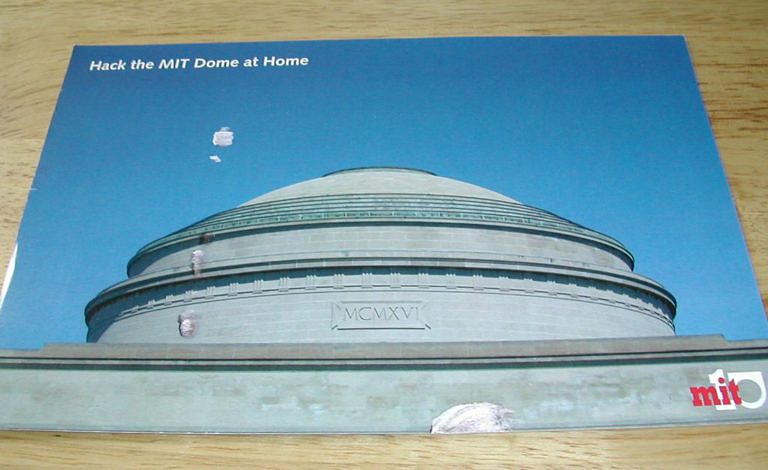 One of the more amusing/endearing parts of dating someone who went to MIT was learning about the hacking culture there. Hacks are anonymous, clever, and non-destructive pranks, ruled by a code of ethics. (Perhaps some of you heard about the recent cannon.) Attached to the back of the postcard were two magnets, one with a police cruiser and the other a cow (this was the only cow link I could find, though they did put a plane up there). 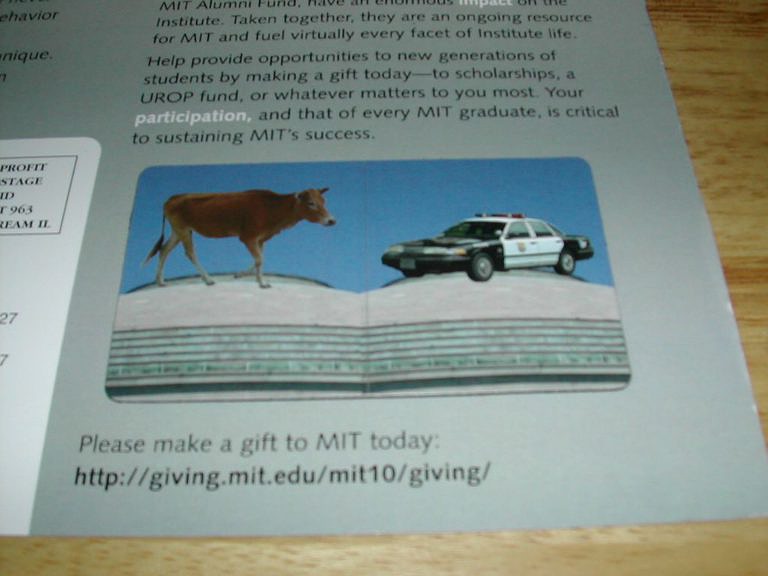 Many of them are impressive for the quality of the work, while others are just quite funny and clever. I love this airplane (click through to the instructions for removal). Kevin has a particular fondness for this boat.

We had an amazing sunset a few nights ago, with blood red clouds stretching from the horizon to overhead. I tried to take a picture from the upstairs window, which turned out blurry and pink: 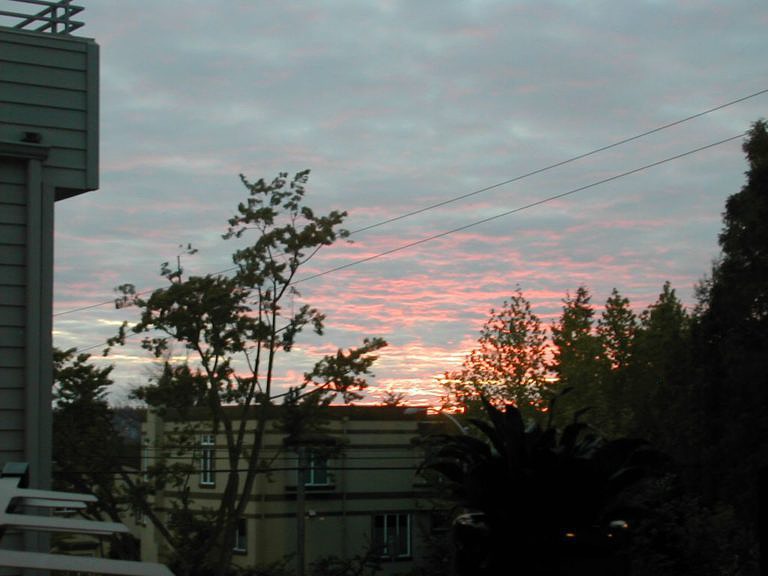 then from my parking spot, which was less blurry but still pink: 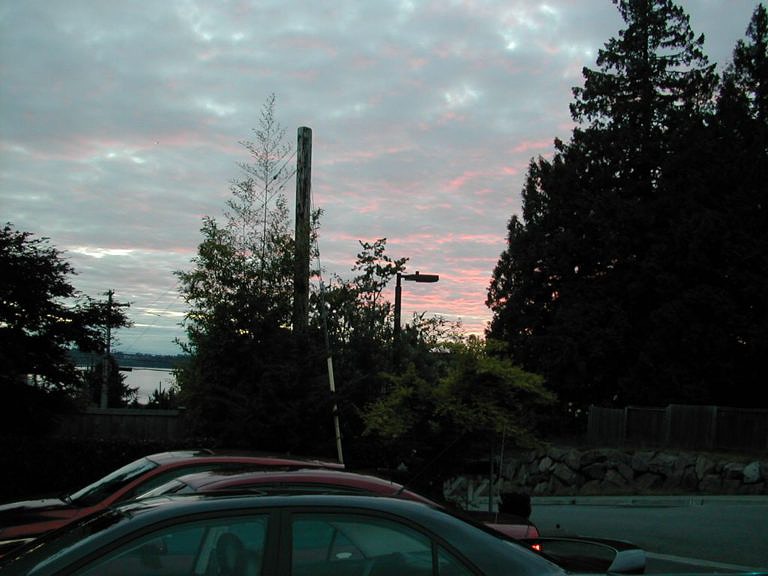 Mildly thwarted, I turned to go back in the apartment and saw that the sky was reflected in our neighbour’s window. The flash didn’t go off this time, and the colors are actually true: 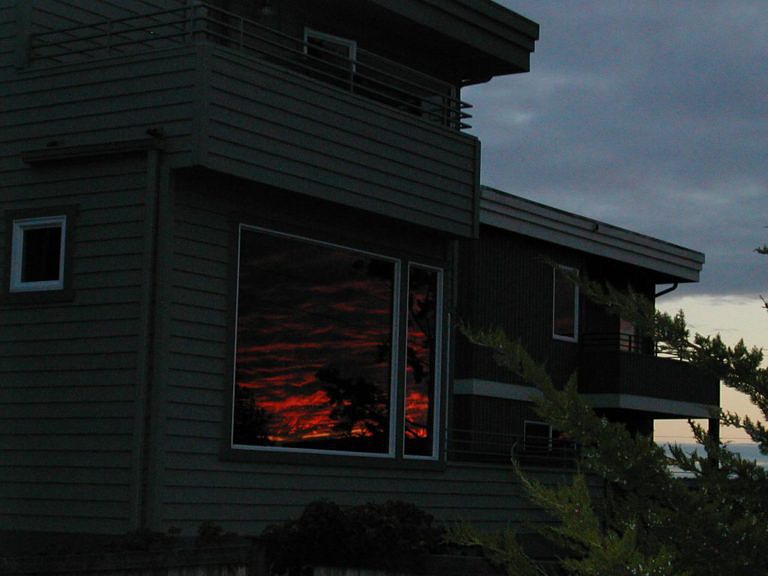 Rather end of the world…

The yarn is called Handwork Cora… I found it on Elann for $16.92 including shipping and handling last spring when I was still feeling broke from my work sabbatical. It’s a Cotton/Acrylic blend, and feels a bit odd, but it’s machine washable and I love the color (and only $16!) so it’s fine with me for this project. The pattern didn’t really show for the first few rows, but the further I get the lovelier it looks. Four-row-repeat lace patterns are so addictive. 🙂

PS, in other knitting news: remember Janell’s sunset socks? She’s clearly been living in the Pacific Northwest too long — she overdyed them a cloudy grey. 🙂