I was pleased that the kids were so impressed when I brought a tiny pumpkin home from the grocery store. And now it’s sitting with the fall pumpkin holders, lending some beauty to dinner. 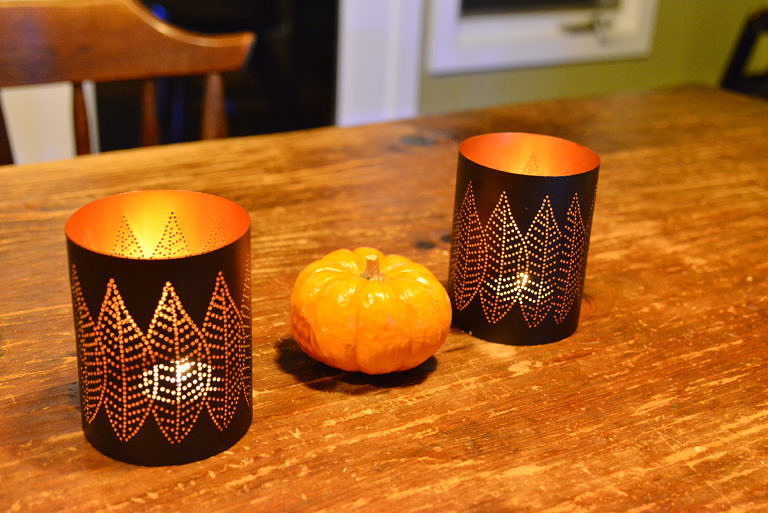 And it makes the prettiest view from my vantage point on the couch. 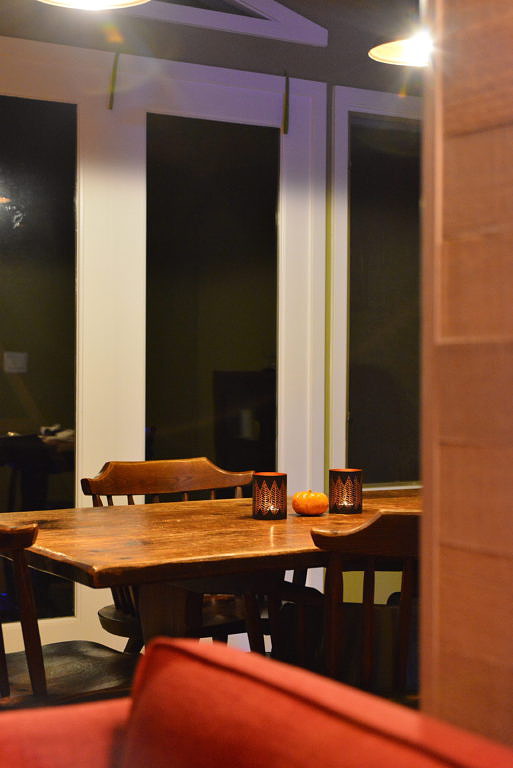 Something tells me we will go through a lot of tea lights this year.

One of Andrews best friends from college is getting married this weekend in Seattle (lucky us!!). Shar mentioned it when we were in San Francisco last spring, so I’ve had a long time to look forward to this visit, and more so now that it’s a milestone — the last time we’ll see them before the baby arrives! I didn’t envy Sharon the trip (esp since she’s also been on work trips to New York and Chicago in the last two weeks), but I’m so glad we got to see them, and for a great, long, five hour visit.

The kids were SO excited to have them here, as usual. 🙂 This sign appeared on our door last night in anticipation: 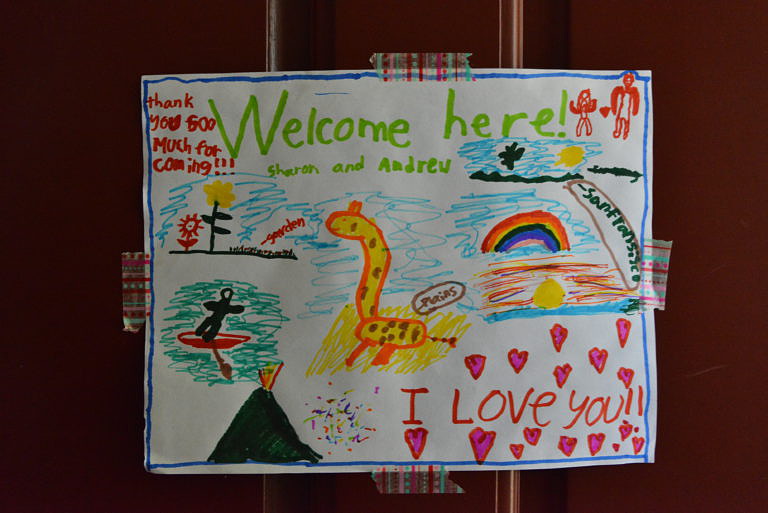 I laughed at us, if they’d stayed still, Shar and Andrew would have quickly become fenced in by a rising pile of toys and objects that started the second they walked in the door. Claire kept racing away to bring more cool things to show them. Henry was a step behind, but, laughably, I kept doing it, too. “Shar, come see my new path! My flowers! My couch!” 🙂 They showed up bearing an amazing assortment of pastries from Phinney Ridge – we all caught up, then sat to enjoy the panoply. Then off to play! 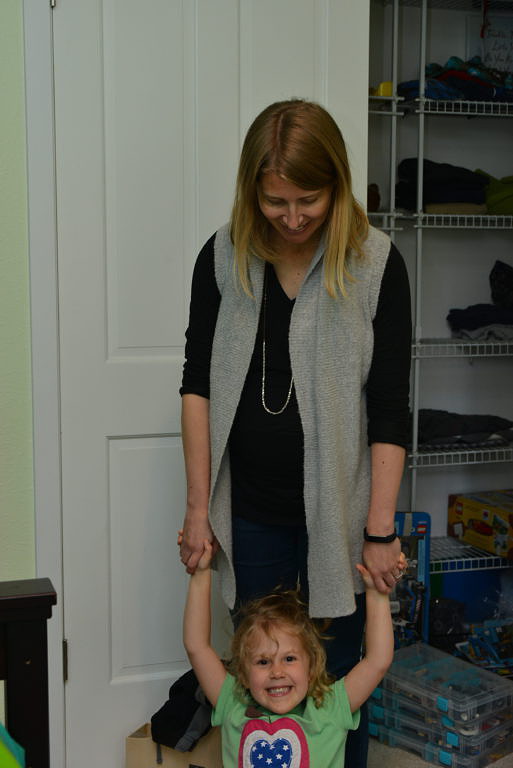 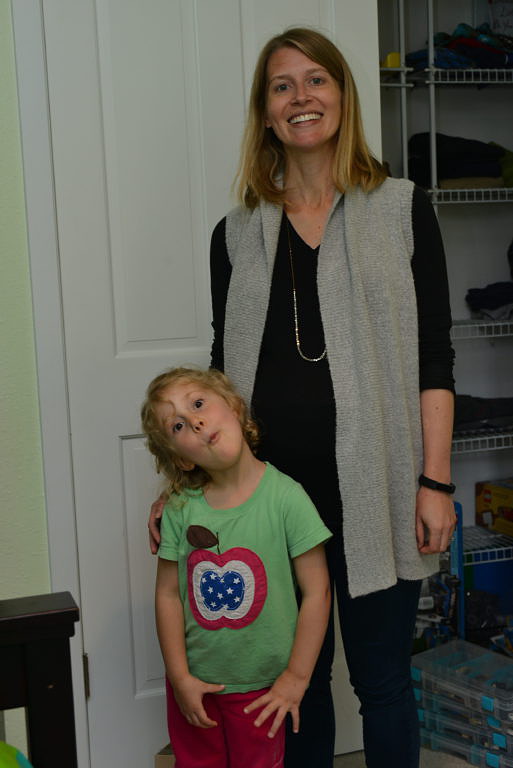 In the Lego Zone with Henry. 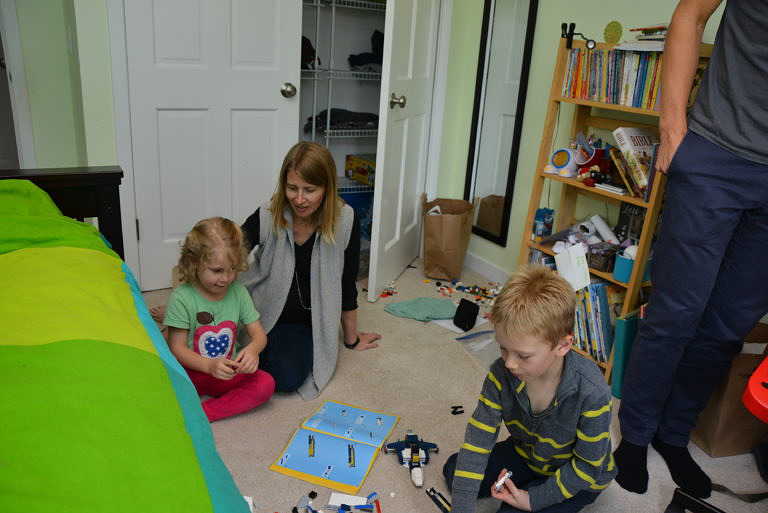 A rocket reenactment with flashlights. 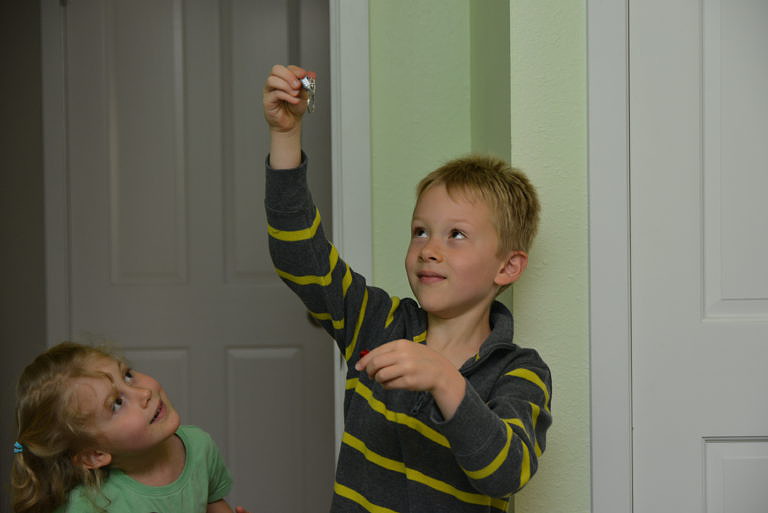 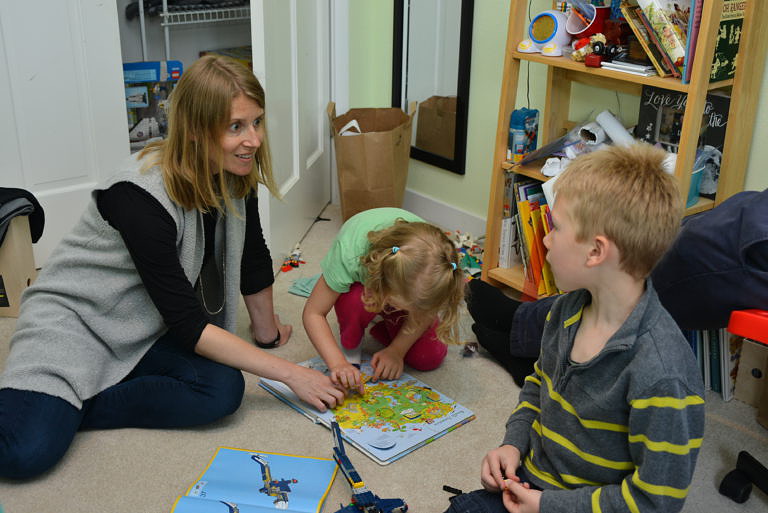 Andrew continues to be a good sport. 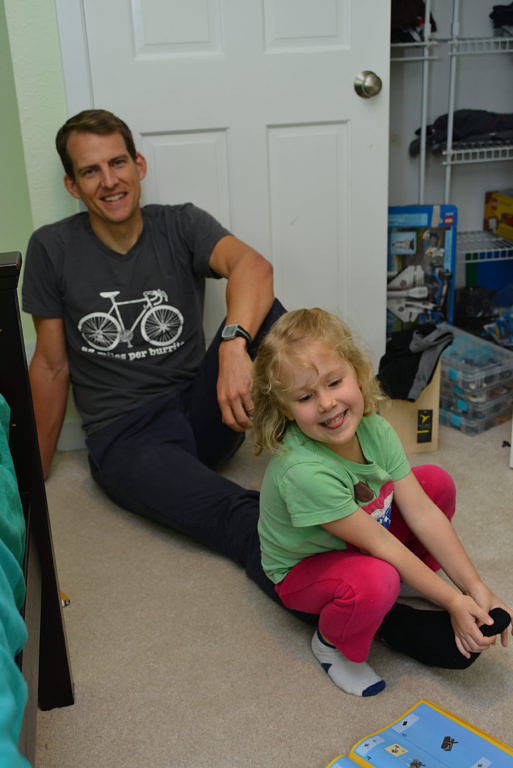 Laughing in the kitchen with lunch almost ready, the first version of this “sisters” photo had me accidentally holding a spatula. 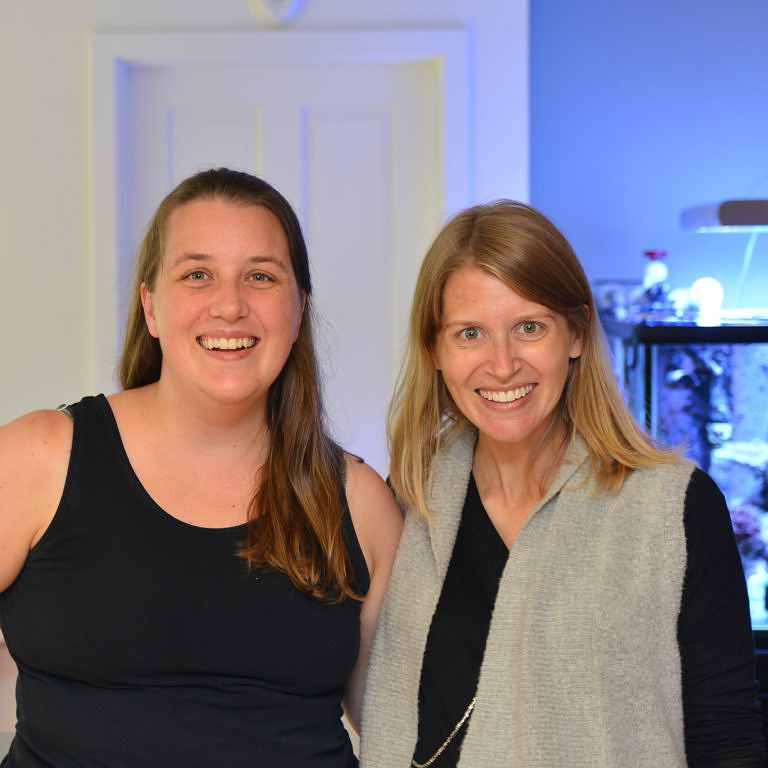 Baby’s first hand knits! (and, not shown, first book! “That’s not my duck”, a cousin of “that’s not my penguin” which we read to tatters.) I cast on for the sweater the day before we left for North Carolina, and finished it in early September. A sweet, soft, bright spot of a knit. It’s definitely a newborn sweater, will only last a few weeks. But those weeks will be around Thanksgiving, Advent, Christmas, and the New Year (which is a lot of color schemes), and I also wanted something that could be quiet enough to go over a lot of sleepers without blinding Shar & Andrew. So a neutral — gray for Sharon (and coziness, Seattle family who will be thinking of him, San Francisco fog banks, and the short days of December), and little bands of sunshine/candle light/joy/hope brimming at the edges. I hope it’s soft and cozy for the baby, and also feels like a hug for Shar & Andrew when they hold him while he’s wearing it. 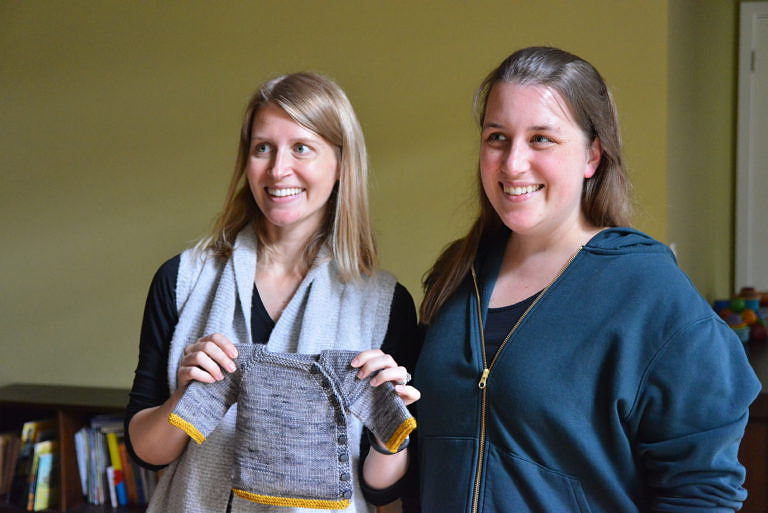 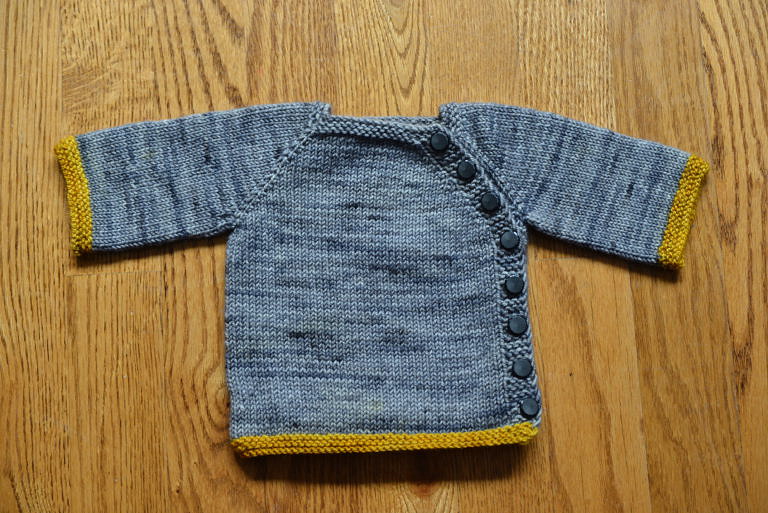 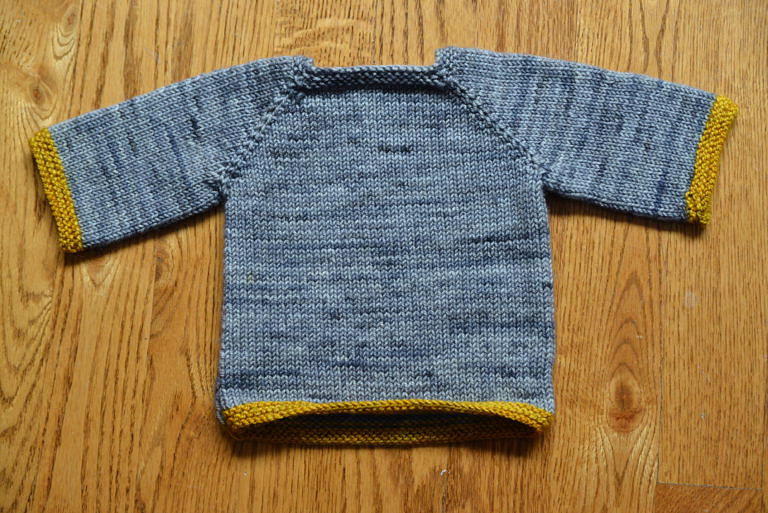 We also packed them off with many of our hand-me-downs. Many newborn to 6-month clothes and hand knits. A sleep sack/swaddle. One of the mini travel cribs that I used as a bed-side bassinet, and during meals and meal prep and dishes during the early months, and later to contain Claire once she was big enough to sit while I was in the shower. It even made a showing in the blog post from Shar’s trip here 4 years ago. Gracious, a lot has happened since then!!) I hope they are useful and great.

After lunch, the kids went for a late nap, and we had a great catchup in the family room. It was great to hear about Andrew’s new job, Sharon’s promotion, their new apartment (and see pictures, it looks gorgeous and the views are so pretty, plus the tales of the nearby bakery and ice cream shop have the kids ready to visit asap), all the plans for daycare/leave/a new car/the new garage space/crib set ups, etc.

It was the best day, I’m so grateful that the schedules worked and that Shar and Andrew were able to give us so much of their day. And now I’m just wishing Shar a calm work schedule for the next two months, and steady progress on the baby’s room, a good car to appear, and a baby who stays put until the proper time (sounds like she’s hearing all the premie stories that used to scare me). A healthy, happy third trimester. 🙂

Henry cried when he woke up from nap he was so disappointed the visit was over. I know how he felt.

Ending on a happier note than crying because the visit was over… Everyone a bit later, regrouped and ready for family game night! There’s a lot happening in this photo – Claire is exclaiming that she plays this game at her school! She sorts them into groups! And she wins on every card!! Henry is half concentrating on his cards and the new-to-him rules, and half taking issue with Claire’s “I win on every card!” philosophy. Sometimes her bubbly four-year-old frame of mind is completely beyond him. (This is also the last photo of Henry before a suddenly-overdue haircut.) Meanwhile Kevin takes his Uno very seriously. 🙂 Actually joking, he takes Parcheesi very seriously but this was just a flash of concentration. I should have asked people to look up and smile. 🙂 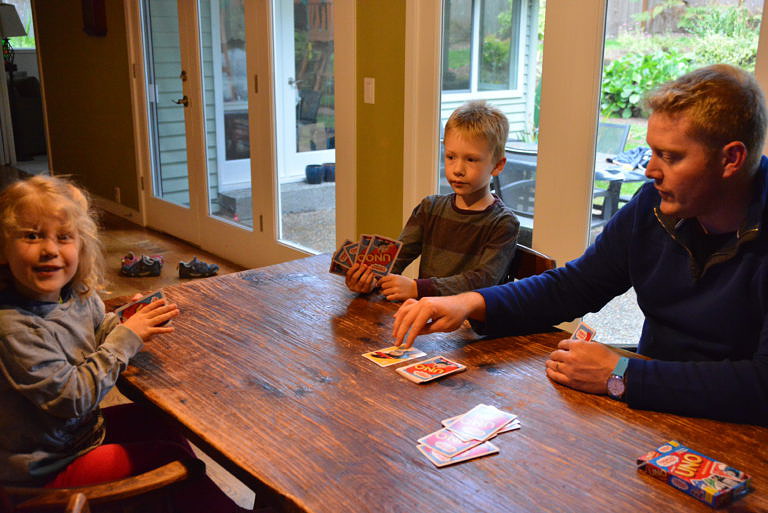 I was proud of Henry – he came in fourth (ie dead last) three times in a row, and was genuinely sad about it, but kept an even keel and swallowed back the disappointment quickly, and didn’t lose his temper at all. Not bad. And good sportsmanship. I was also impressed at Claire, she remembered about saying Uno every time, and caught the rules right away – numbers and colors are old hat enough to her that she didn’t have to think hard about which card to play. We played the first game with our cards down and visible to everyone. For the second, Kevin asked if the kids could keep their cards secret, and Claire said, “Yes! I’ll keep them into my body. And when I need to know them I’ll use my eyes.” 🙂

We ended on Hoot Owl Hoot (a collaborative game, and funny if you take their advice to hoot out loud every time you skip over an owl, like you’re saying hi). Rather a palate cleanser, and we were all happy at the end. That might become the new ending game for game night, not least because Claire isn’t at an age where she cares about the suspense of “winning games” and tends to wander off mid-game, so this is a nice way to end with all four of us playing.

I’d been saving the job of planting the thyme until the kids could help. Saturday morning, we had swim lessons then a snack, then finally we headed for the garden. I used the first pot as a demo (how to get the plant out of the pot, how to loosen the roots, how to put it down and pack around it with dirt), then both kids did two pots themselves, and I planted the sixth. It looks green and pretty, and I’m happy, and they were so proud to help. Afterwards, they applied themselves to lining their gardens with rocks, and I finished weeding the stretch by the house (which will eventually be shoveled out then covered in a thick layer of gravel, and a top layer of river rock if I can find the right kind — big enough, uniform, and an attractive grey color).

Last night, I did the real work, which was converting my 39 kinds of plants and bulbs…

… to a bloom map by month (along with color, which ranges from blue to purple to magenta, and a few near-black purples, and a few lavenders), and a list of heights and widths. 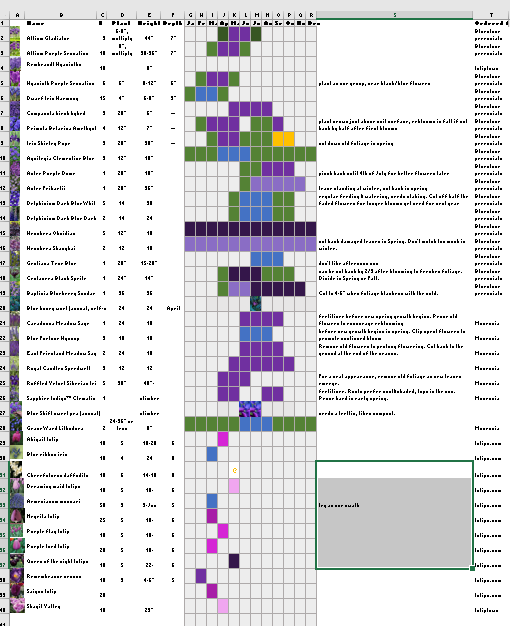 Here’s a detail view, I am so proud of it.

You can tell it’s the beginning of September and I had back-to-school energy that had to go somewhere. So I sharpened my Excel spreadsheet, cracked open my browser, and for the next stage, got out the graph paper and markers. 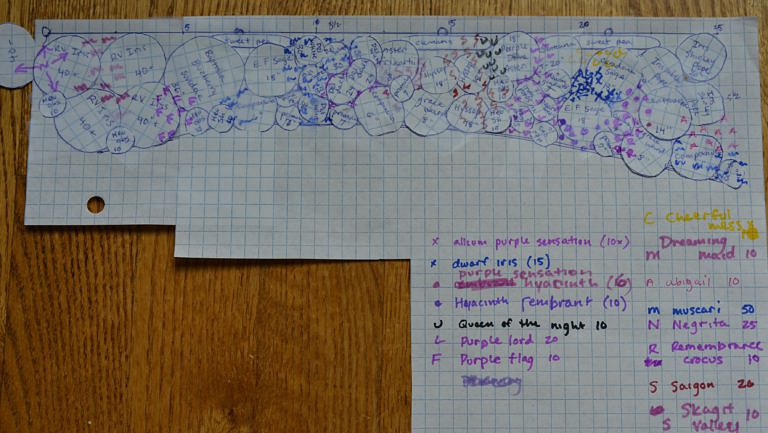 This is 56 plants (the circles) and 195 bulbs (the marker-drawn symbols — the bulbs might not all fit) in 25′ of garden that ranges from 3.5′ to 5.5′ wide. I should have blooms from Feb to November and some evergreen. Heights ranging from 7″ up to 40+. The stages are bulbs (crocus, hyacinth, tulip, allium, late-daffodils), irises, then pure flowers (asters, sages, hyssop, veronica, companula, primula, baptista, delphinium, gentiana, centaurea, clematis, sweet pea, etc.), then heuchera which bloom white in the summer but have colorful leaves nearly year-round. Except for the sweet pea, they’re all perennials or bulbs that will naturalize. The majority should not need to be watered (I think Delphinium is probably the exception, but the rest should make do). The majority should be pretty pest-resistant. (Although I’m guessing the squirrels will eat the crocuses before they even bloom, and the rabbits will think the asters are delish. Yet hope springs eternal.)

I got the first set of plants into the ground this afternoon. The remainder should be arriving 2-3 weeks from now. When they’re all in, I’ll order mulch to suppress weeds in the small spots between plants. I think it’s going to be wonderful when it’s done.

Over the winter, I’ll need to work on three trellises (one for deep purple clematis, two for “color-shift” blue/purple/magenta sweet peas).

These are late in the day photos, so the light is a bit shadowy. Claire helped me water all of the transplants! At some point I’d like to install a hose bib on this side of the house, but in the meantime a five gallon bucket full of water and a chatty four-year-old helper with a watering can works! 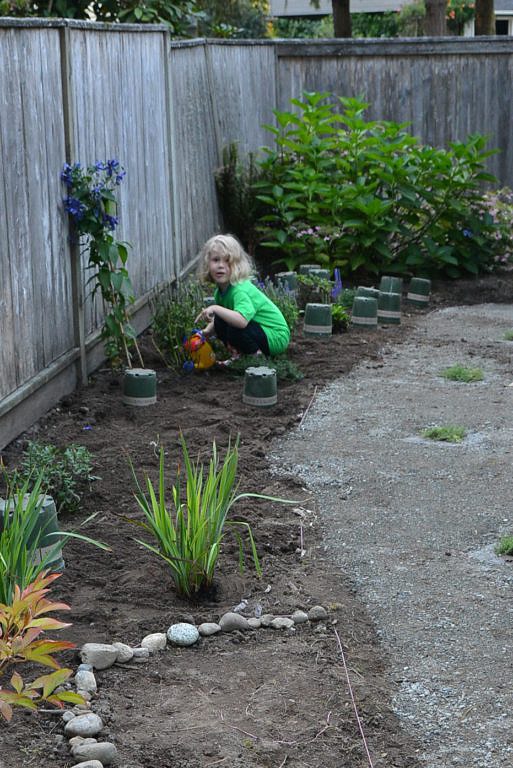 I designated a kids’ digging spot just south of the path out of sheer self-preservation. Claire lugged the trucks and tools there in no time flat. 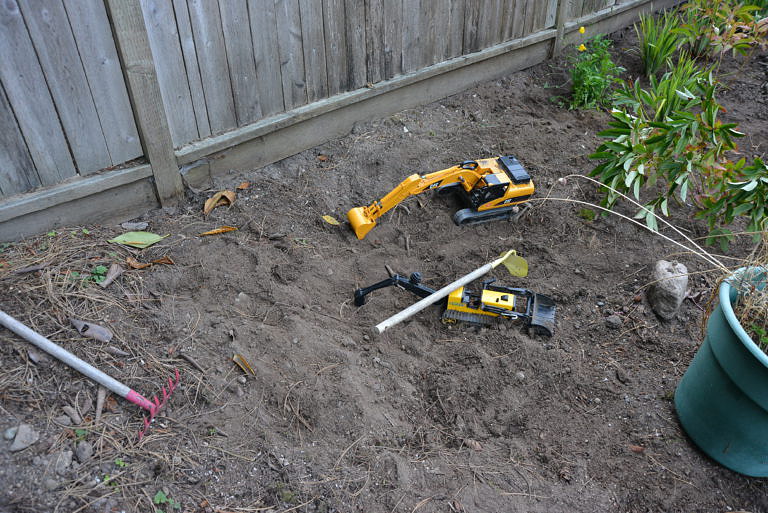 A photo that captured all of the thyme plants, plus Henry’s rock-lined garden (at right) and Claire’s (at left). Henry wants to plant his in a pattern (daffodil, tulip, carrot, daffodil, tulip, carrot). He didn’t like that I said we could plant the daffodils and tulips now, but the carrots have to wait til May. I wonder if you can over-winter carrots and then I can skip this entire argument?? I would love the gardens to be their spots, not my chance to micromanage their plans. 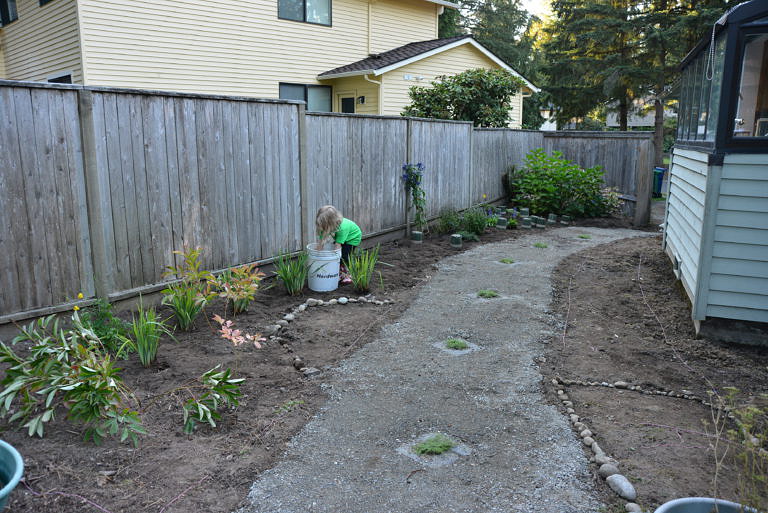 A view from the garden back to the fishtank and art table. 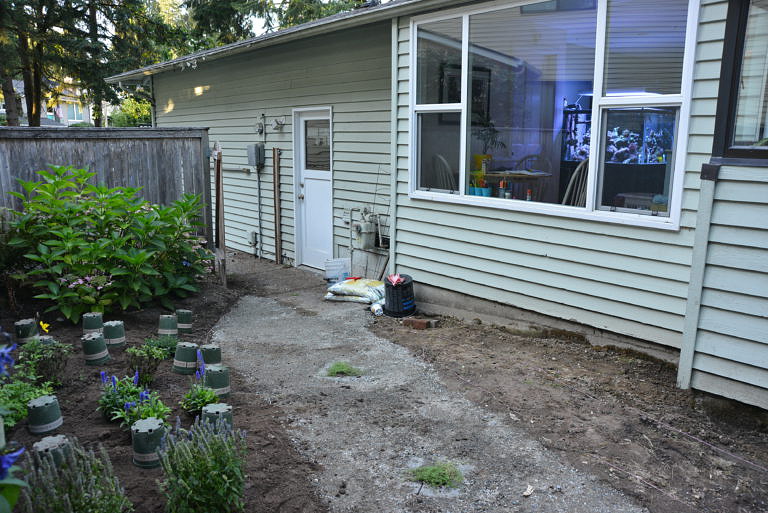 And of course, the afternoon of bed prep and digging wouldn’t have even happened if Kevin didn’t do the grocery store and then dinner. Standing where the Delphiniums will grow, and appreciating Kevin: 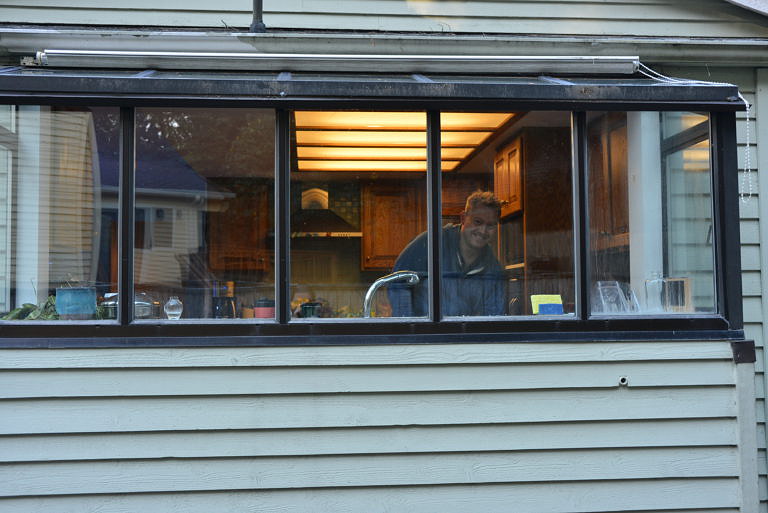 I never post photos of this side of the house. Here’s a taller shot over the roof. 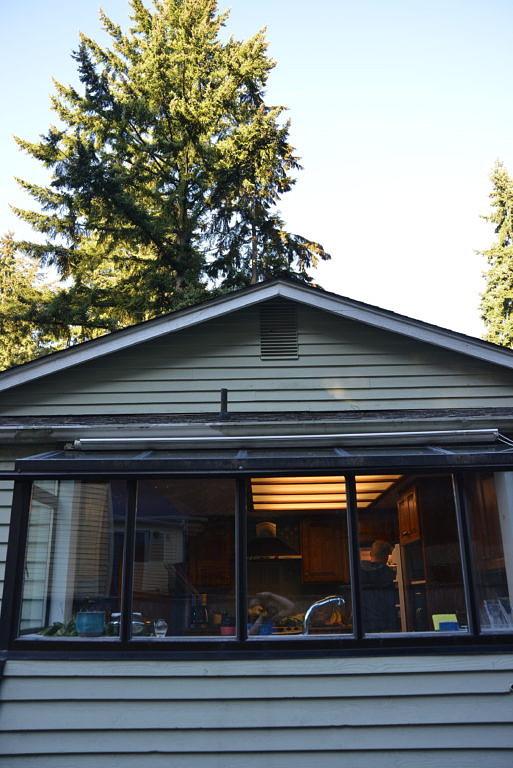