And, a happy surprise: 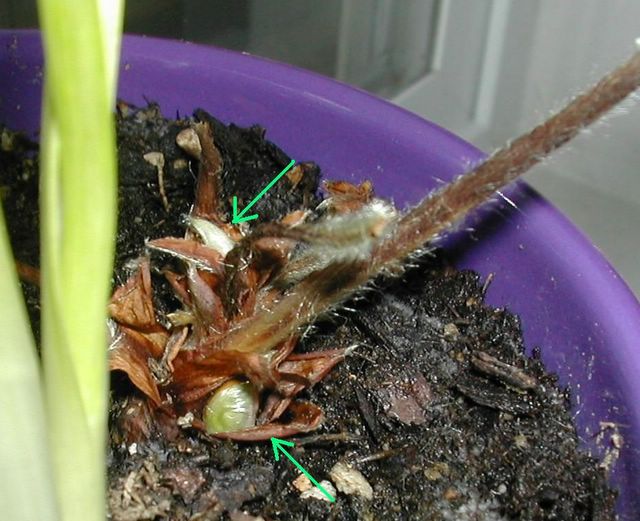 The two green arrows are pointing to green buds in the strawberry plant! Neat! It’s still alive! I don’t know how much it can grow or thrive without any leaves to make energy, but I’m so encouraged to see that it’s still sending out buds. Does anyone have suggestions (fertilizer? etc?) to keep it alive and happy while it’s regrowing?

Since this is alledgedly at least in part a knitting blog, and since this was one of the best moments of Christmas and knitting-related to boot, I ought to show a present:

Kevin’s mom has a stocking that her aunt knit for her when she was very little. It’s utterly lovely, with her name, the year she was born, and a Christmas tree decorated with sequins. 🙂 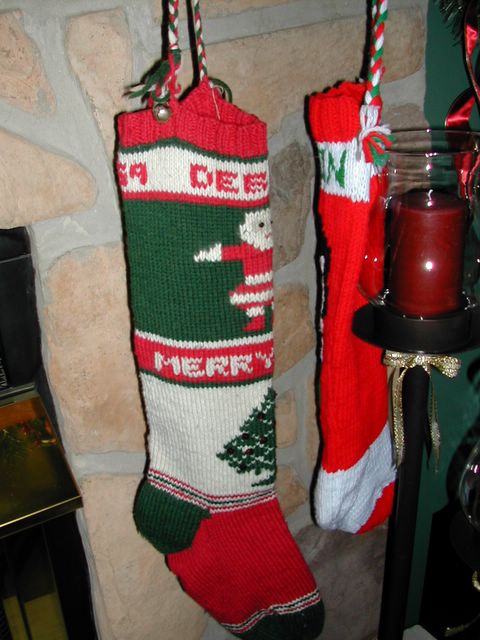 Then, when she was married, a dear friend of her family’s knit Kevin’s dad a stocking with a portrait of him on it (note handlebar mustache!): 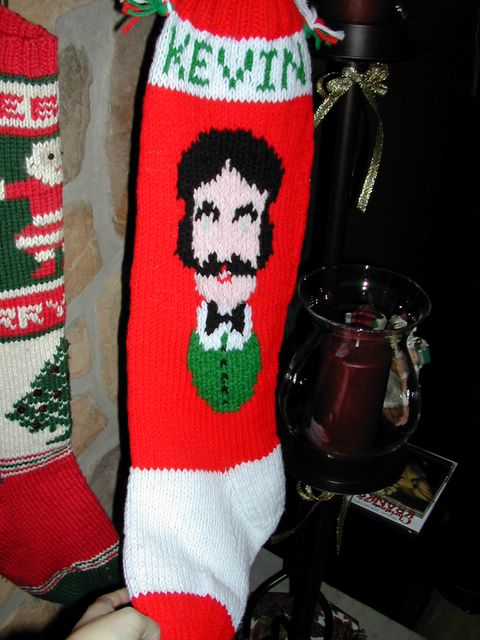 She also knit Kevin and his sister Kristina a stocking each when they were born.

When Kevin’s mom found out we were both coming for Christmas there, she asked the family friend to knit one more for me. Clearly, the woman is a very generous soul and a speedy knitter because when we came down the stairs on Christmas morning, there was a stocking for me. 🙂 Wow. 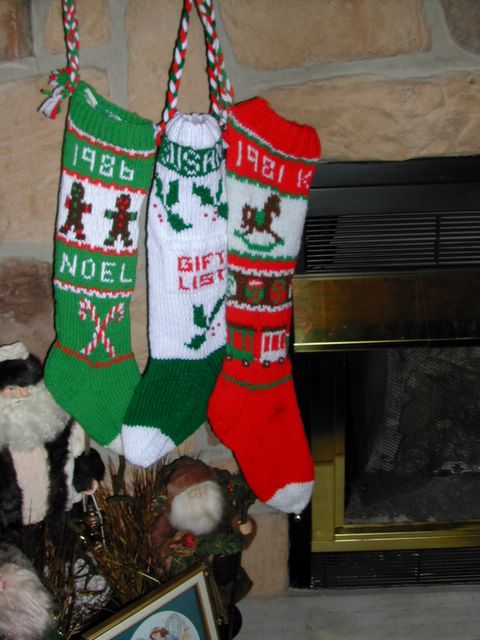 I was so floored. This was my first Christmas not at home with my family, and it was such a wonderful gift. Added to the fact that The Polar Express (which my aunt gave to my sister when we were little — a staunch favourite) was one of the packages underneath the tree, the magic of Christmas is still there. 🙂

Continuing the trading of holidays, I flew back to the east coast with Kevin to visit his family for Christmas. 🙂 When we booked for Thanksgiving in early November, we’d been hoping that the prices for flights had been raised artificially — that the airlines would figure that people would panic and snatch up their $700 tickets for December. So, we gambled and waited a few weeks for them to go down. I still think it was a good idea, but prices, if anything, went up. We ended up flying United (squishy, but non-stop and way cheaper than most) to DC, then renting a car and driving up to PA. This ended up working out so that we could see my sister, who graduated in June and has a job and awesome first apartment right in the city. After a wonderful nap, look through photo albums, and brunch out at the crepe place in her neighbourhood, Kevin and I started on the road. I started a new Hayden: 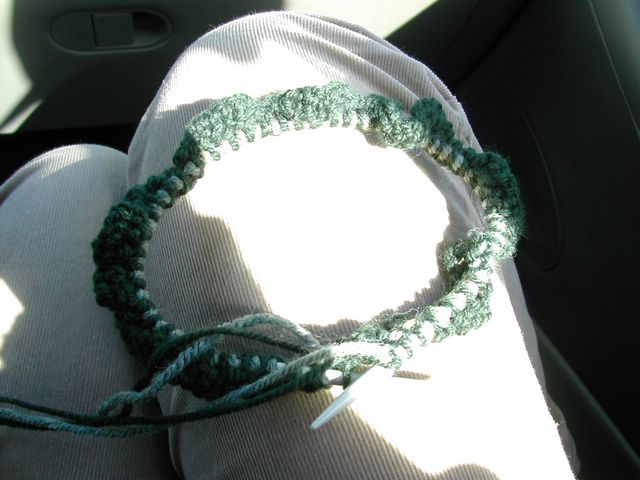 For those who may make the drive, never take New York Ave to Rte 50. We sat in traffic for ages. Eventually we got off and wended our way over to 95, which was semi smooth sailing to Baltimore, when we started seeing signs like this: 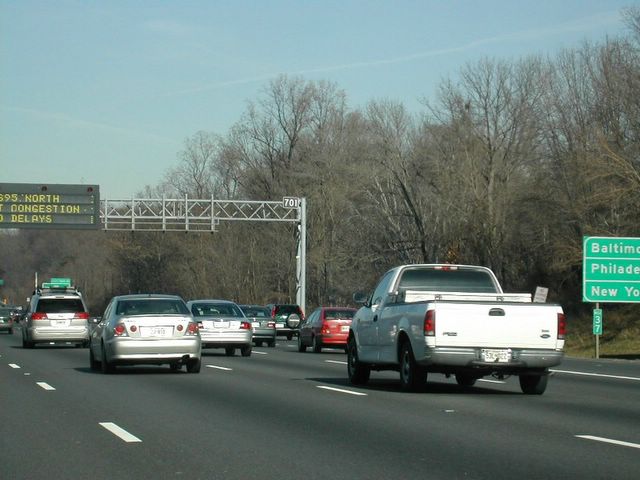 By the end of the drive, the hat looked like this: 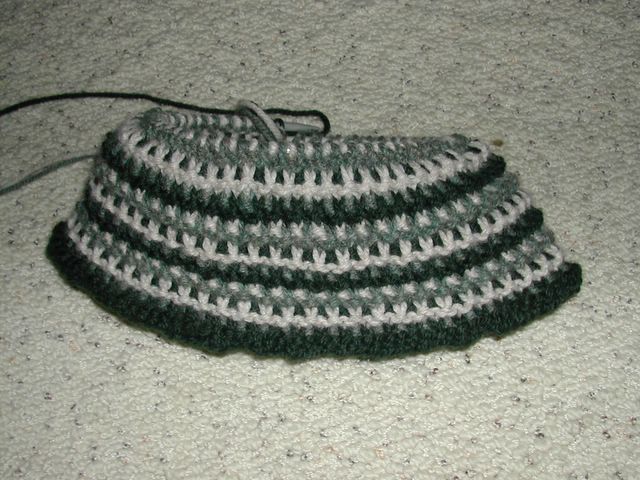 Progress! At the expense of travel time, but nonetheless progress. The first time I knit this hat, I ran into endless problems adjusting it for a larger male head. There’s something about hats that my brain just doesn’t get. This time, I had all of my notes from the time before, and yet still managed to out-think myself. After knitting on the drive, I measured and “realized” that the seven and a quarter inches of decreases couldn’t possibly work with the size of kevin’s head, so I ripped out all but an inch. Apparently I neglected to reread this post before reknitting the whole hat, because I made the exact same mistake of ripping then reknitting three inches less as a year ago. Once I realized what an idiot I was, I decided to just keep going and finish the decreases, so now I have a baby-sized sunbonnet-ish hat. After restarting, I’m this far: 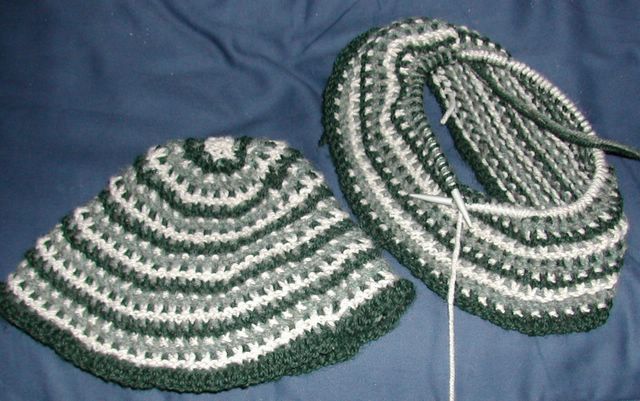 (Kevin’s family is convinced I’m math-disabled… at this point I’m in no position to have proved them wrong, frequent measuring not-withstanding. I tell you, doing a gauge-swatch is no insurance against stupidity.)

A mere ten months later, I have finally finished the white sweater!
Pattern: Bomber Jacket from Rowan’s Denim People
Yarn: I substituted Cascade Sierra in off white (#03) for the Rowan Denim 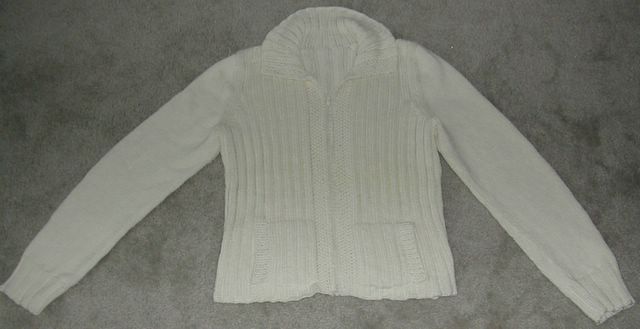 After knitting this, I don’t think I’d knit another Kim Hargreaves pattern — the text and finishing instructions left a lot to be desired, it wasn’t very carefully constructed (details like keeping a knit rib on the sides to facilitate sewing up, specifying where increases should go, etc.) and things like the shoulder decreases and sleeve cap were wildly off.

That said, I’m proud of it. I spent a lot of time working with the yarn substitution and pattern gaps to come out with something I really liked. I’m impressed at how well the various changes worked. The greatest triumph was my first machine-sewed zipper: 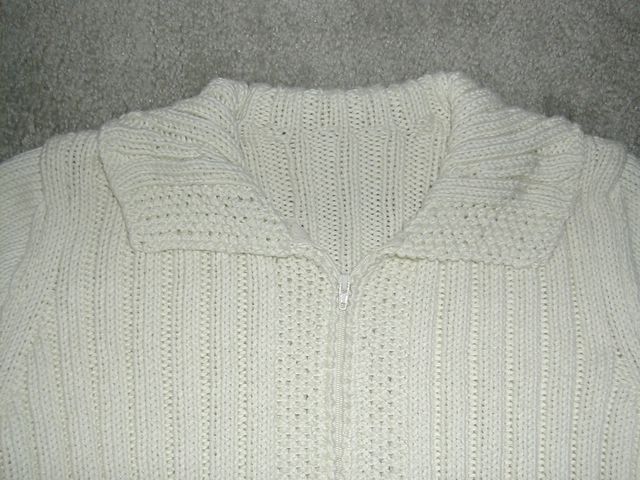 Apparently everyone was right and the trick really is just to baste it down firmly before you start. I think it’s the height of cool. I also love the collar.

Once the body was blocked, the sleeves stayed a bit big (which I can live with) and the ribbed pieces went from teeny to quite big. Does anyone have any experience blocking ribbing? Can you get it the ridges to lie closer together if you re-dunk it? This sweater is quite boxy — I wouldn’t mind if it was a bit more form fitting.

I finished it a week and a half ago and keep forgetting to take a daylight photo of it on. So here’s a front and back in the mirror before work:

For the first time in half a year, there will be more daylight minutes today than yesterday! We’re on the upswing!

In the meantime, I’m keeping those candles lit… 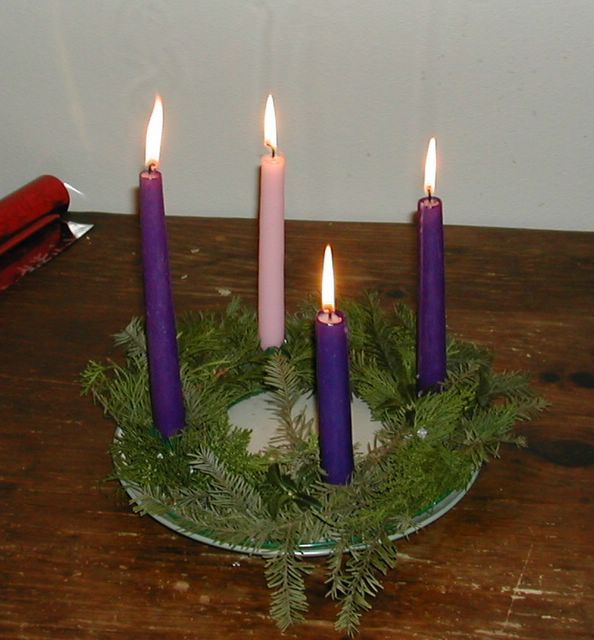 So I took all of your excellent advice and planted the garlic. Wow. 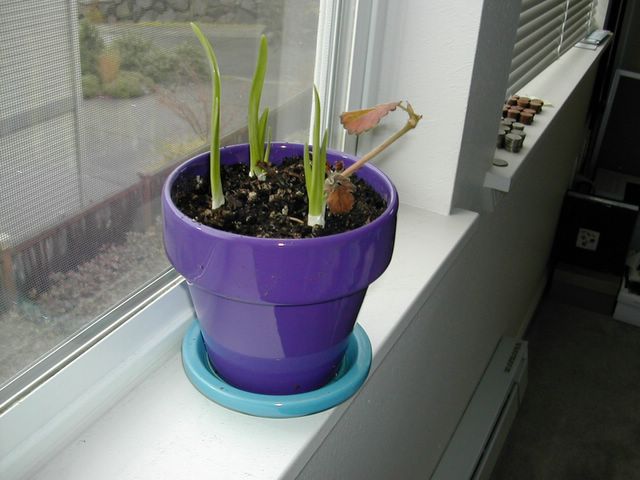 It does grow, doesn’t it?! In a week and two days, the three bulbs, only two of which had small shoots before being planted, have produced three many-inch shoots, plus a few rogue ones off to the side. I’m not used to plants in my care exhibiting this sort of enthusiam for life!

They’re sharing a pot with the unfortunate strawberry plant — after its awesome berry episode, it managed to get covered with teeny web-spinning bugs. I put it outside and the frost killed the bugs (score!) but also the leaves (oops.). The root structure is still deep and strong and the stalks are bendy and green, so I’m keeping my fingers crossed that it be inspired by the cohabiting garlic and will grow back.

It’s been a year since we put our lights on the tank and so is time, to our wallets’ chagrin, to put in new bulbs. Our hood is a JBJ Formosa DX, which is 4x65W, and we started with 2 bulbs of 7100K (the blue lights) and 2 10000K bulbs (the white). We’d bought this with the recommendation of switching in true actinics for the 7100K after a year, but when we got home with the actinics, the light was no longer blue but purple. All of the corals, especially the green and yellow, were completely washed out. So, we went back to the fish store and traded them in for a pair of SunPaq bulbs that are half actinic and half 7100K. The blue light is back! You can tell, though, that the daylight bulbs have lost most of their power because the blue light overwhelms the white. We’ll wait a week or two so as not to shock all the tank inhabitants, then swap out those bulbs for new.

While we were playing with the bulbs, I also moved our green zoo frag rock over to encourage it to spread onto one of our main rocks. I’d encouraged a few zoos off of the original colony onto this one about two months ago, then cut it loose and in the last few weeks they’ve nearly doubled in size and number. 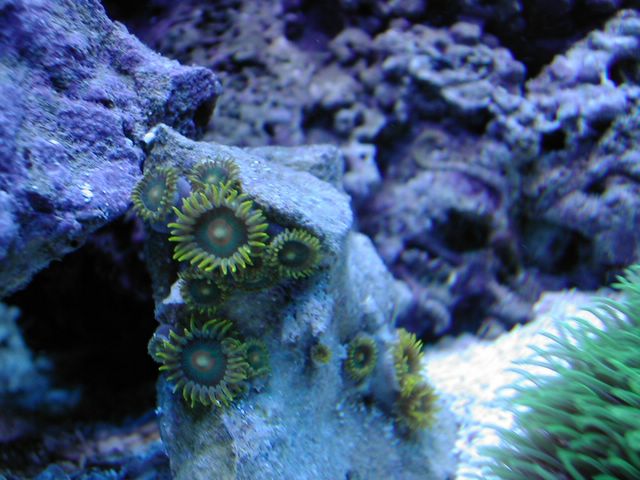 I want them to spread onto our big rock (aka the gramma’s rock, since he sleeps in a cave inside it). It’s more or less 15″ long, 10″ deep, and 14″ tall, and already has our original zoo colony on the upper left face and some transplanted orange zoos on the back. 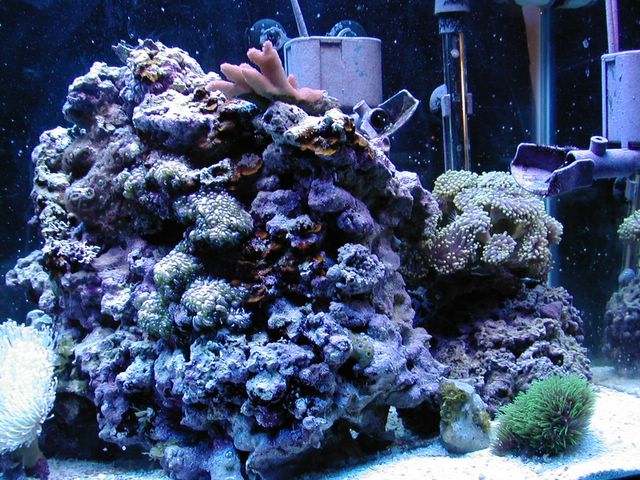 I’m hoping that our gorgeous green zoos can be persuaded to cover the lower left edge.

Our green mushroom has finally budded a new baby green mushroom! We’re delighted. The proud (?) parent is all folded up below its new offspring here: 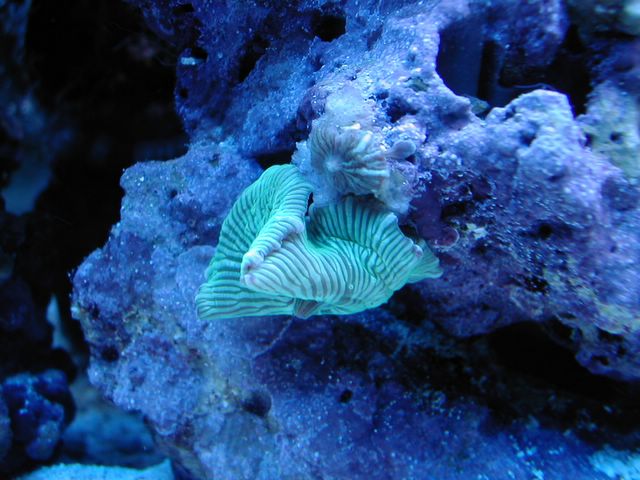 First presents arrived from my parents on Tuesday (thus dashing all previously-held thoughts than my procrastinating tendencies may come from them…). Such pretty sparkly paper! I was particularily flattered by the green tree paper. My mother, like her mother before her, is a great re-user of pretty paper. I recognize this one from a while back, so I’m flattered that we seemed like the right people to send it to next. It looks so pretty on the table (Since there’s no tree to put presents under, I’ve been putting them by the Christmas wreath, where they look quite festive). 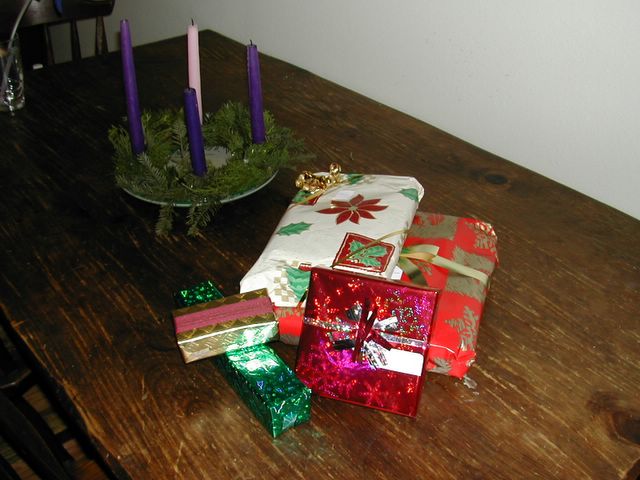 Then, we got a present from Japan! Kevin’s friend Jim got transfered to Tokyo about a year ago, and he and his girlfriend Jess sent us what we quickly concluded was a beautiful sake set, along with a bottle to break it in with. There was also a lovely card of little santa-like elves under a bridge and cherry trees — they reminded me of the elves in Babar. 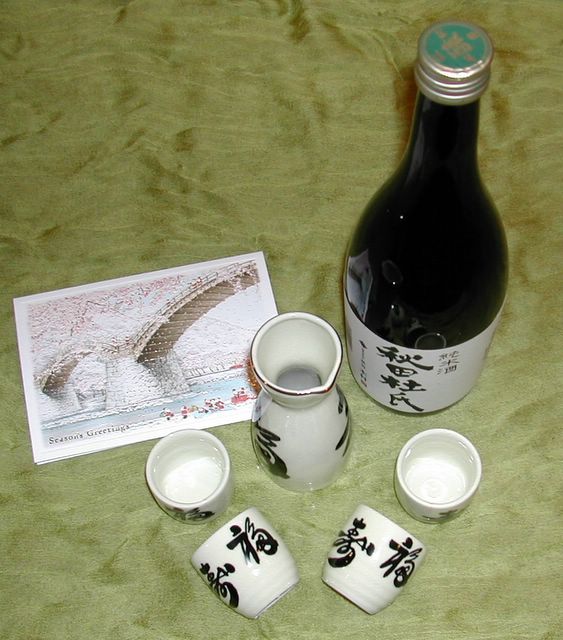 The label didn’t have a character that we recognized other than the 60% which we both thought was neat: 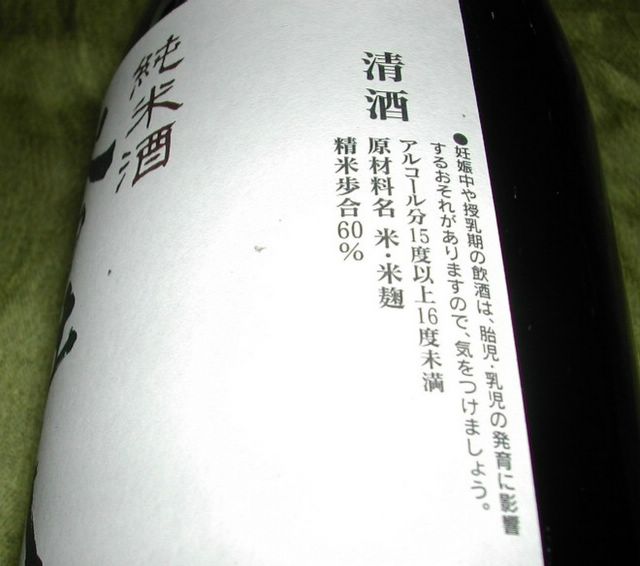 I’m amazed, as always, by their ability to cast themselves into a completely foreign culture. Merry Christmas, Jim and Jess!

Then, in a return to culture that we’re more familiar with, my grandparents sent us a beautiful handpainted ornament of Fenway. I’m not such a “sports on the tree” person, but this is just so pretty, and such a fun reminder of home, that it is a category unto itself. I love it. It, and the adorable puppy on the note that came with it, are sitting next to the advent wreath now as well.

It’s so fun to have all these reminders of people that we love at hand. 🙂

I just thought I’d post a picture of the sky, for interest’s sake. Last year was dark and cloudy all through November, but when we hit December 1st, the sun came out and stayed through mid-April. I was thinking it was just an odd year, but the first two weeks of December have done it again: 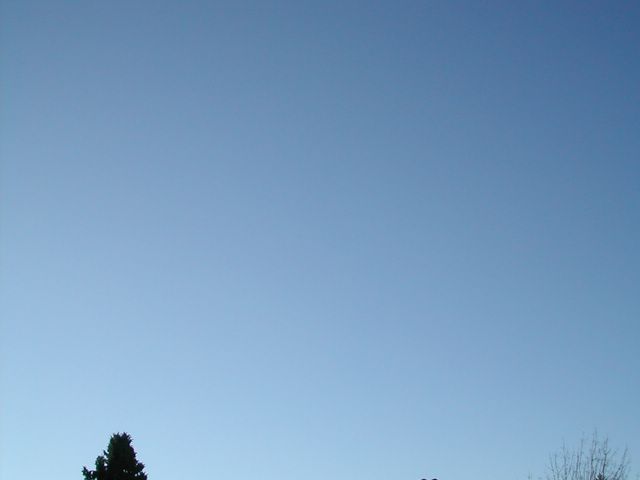 It’s been quite cold (I have to scrape thick frost off the car in the morning, except when Kevin’s sweet and does it for me), and the days are very short, but I love having the sun and the mountains back. Seeing the crystal clear Olympics and Cascades on the way to work is such a lift. 🙂 The mountains have so much more texture when they’re snow-covered. I would have taken a photo, but snapping while driving seems a recipe for disaster, no?