Kevin’s been doing such a great job keeping things running, taking care of errands, and ferrying food and beverages to the nursing chair. He’s also been in documenting mode: 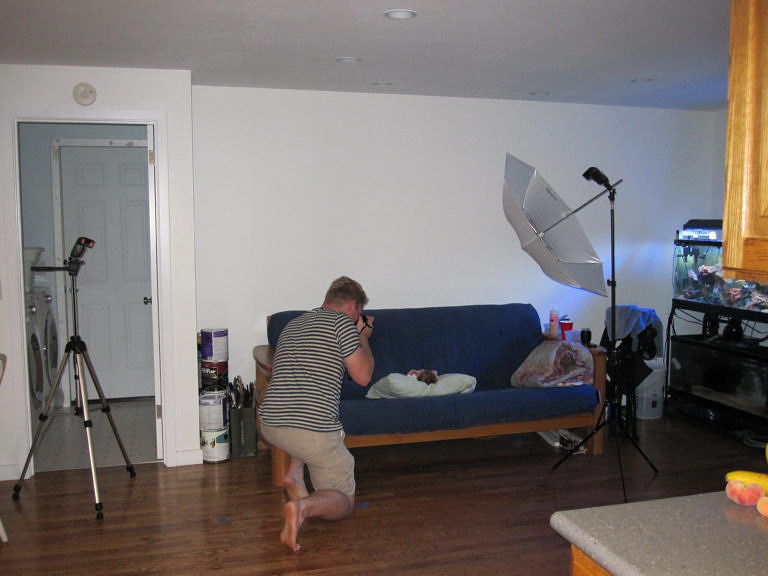 It’s so wonderful to me to watch the two of them together, and to suddenly see Kevin stepping into his role as a father.

Other big milestones today included his first bath in the kitchen sink, and first haircut (just around the ears and back of the head). I was expecting outrage, but he was actually exceptionally calm through both and didn’t start crying until after it was over. Definitely helps that the kitchen window is so warm and there are all sorts of interesting things (bars, sky) to look at! 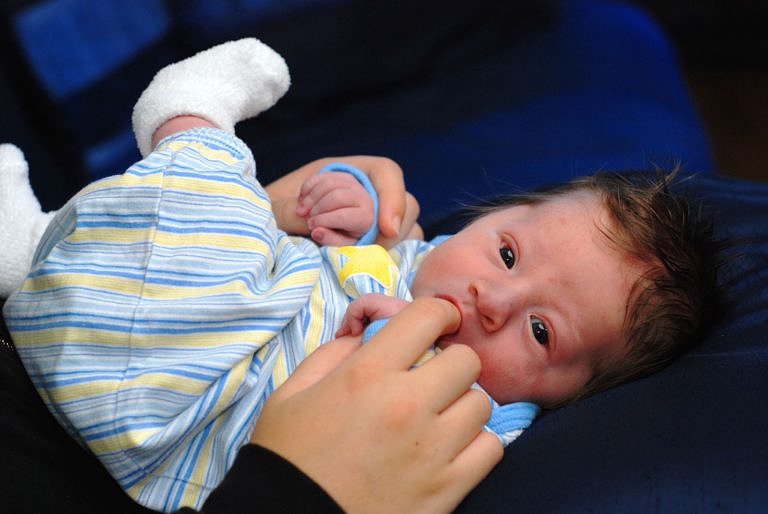 I’ll be password-protecting most of the baby posts, so leave a comment if you’re friends & family and haven’t received the password yet. (Sorry to internet friends, but we’re limiting the password posts to people we know in real life.) Also, Kevin’s started a photo blog here.

We had to document the impressiveness of full-term me: 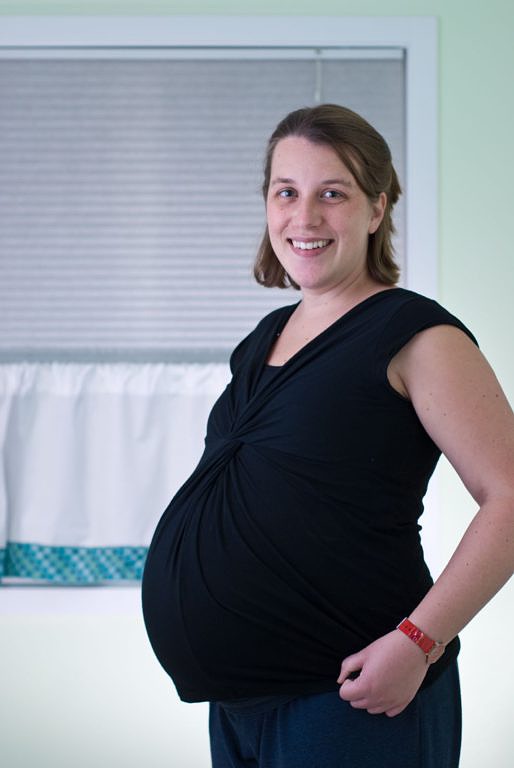 Seeing this photo, it makes sense why all of the maternity shirts have suddenly become too short in the last week.

In the background, you can see the curtains I made for the baby’s room last night. I reused the fabric from the curtains that I made for Kevin’s office, removed the blue border, and added a new border that matches the crib bumper and ruffle that I’m making. Here’s a too-bright, rather green partial view – I’ll get a better shot once the rain and clouds clear up a bit. 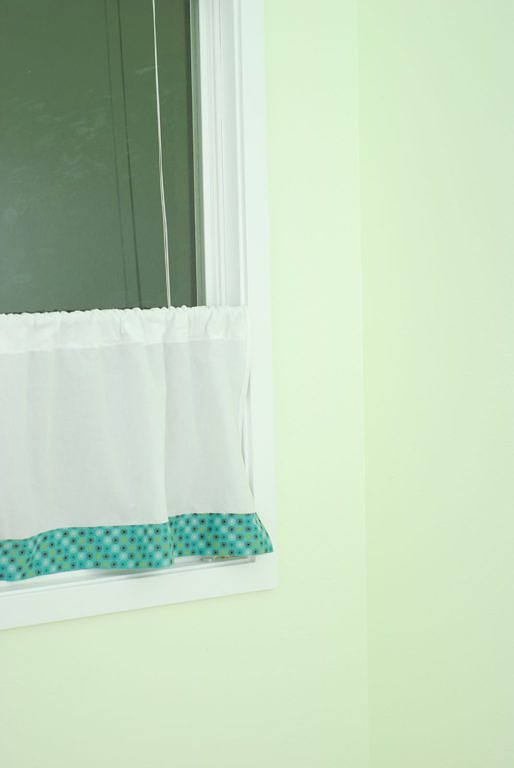 Yesterday was my due date, and still no baby though I’ve been having lots of contractions (I’ve been having Braxton Hicks for weeks, but now there are sporadic real ones in the mix, too, even if they don’t seem to be going anywhere). However, I did manage to finish up another baby hat, this time with the remnants from the owl vest. 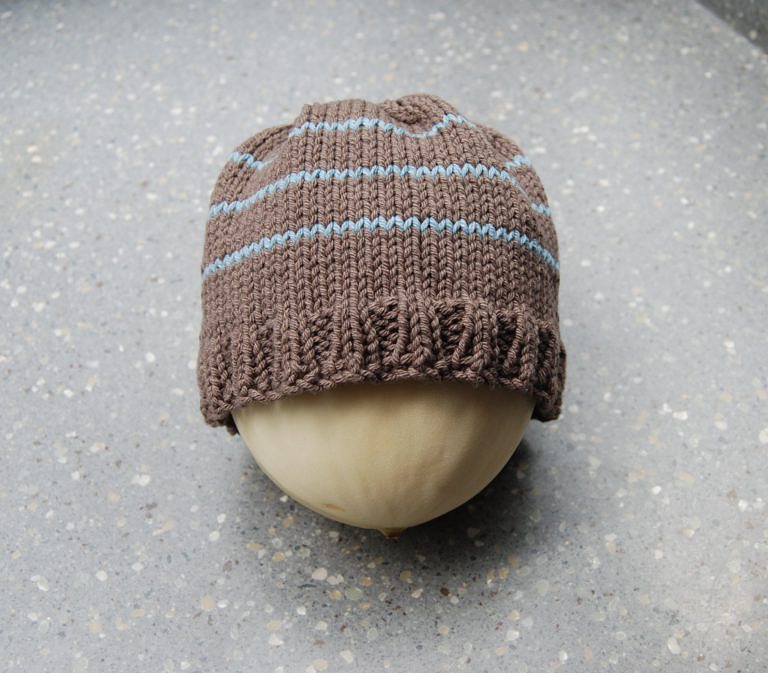 Once again, I used a CSA melon as the model. The was just an ad hoc knit – I cast on 80 st, went 2×2 ribbing for an inch, knit in the round until 4”, and then divided into eight sections of 10 stitches and just kept decreasing at the beginning of each section with a SSK until I had four stitches left, and then pulled the tail through those. 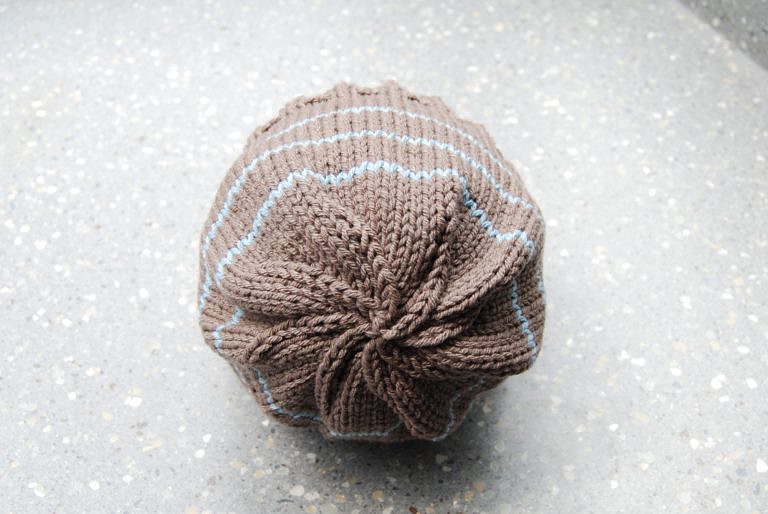 On the whole, we’ve been doing a great job keeping up with our CSA veggies this year, but the summer squash situation is suddenly getting dire. 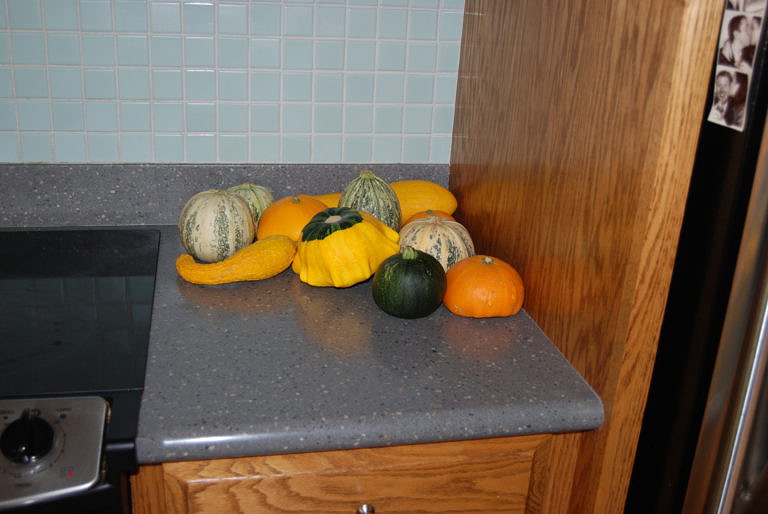 I had to laugh at this site – seems like about our attitude at this point. I actually love summer squash, but I get a mental block about eating it when there’s too much of it. We should probably come up with some sort of strategy, though, since I’m sure there will be plenty more in Wednesday’s bag.

We’ve been in condensing mode here, as a result of combining our two offices. We each did a small amount of weeding out stuff when we moved into the new house a year and a half ago, but there wasn’t really much incentive because it was such a bigger space and there were so many nice closets. Since we moved ourselves, the major advantage was than anything we tossed only had to be moved once (out to the curb) instead of twice (out of the old place and into the new). Since then, there have been a few small purges, and I’ve sold lots on Craigslist, but we both still have a pretty large collection of things.

With all of the office shuffling, we’ve started thinking more seriously about what should stay vs. what should go. This applies to furniture, certainly, but also to things like music collections (which we’re going to digitize – major space saver!), books, and all of the random, mostly useless things that seem to accumulate and then get moved around just because they’re familiar or might be useful someday.

One of the more exciting decisions, in my opinion, came when we started eyeing the DVD shelves. 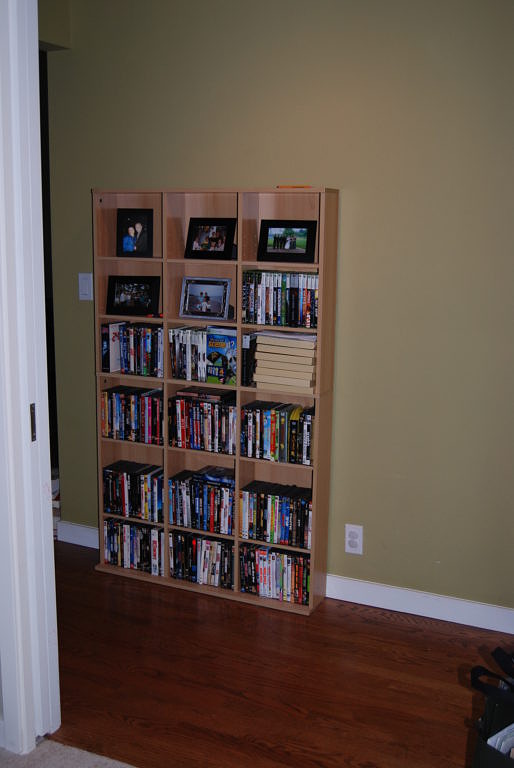 I’ve never loved that shelf – it’s enormous, and proportionately something about it is just really off. But we have a ton of DVDs, and the shelves are so expensive for what they are, and so it seemed like the best we were going to do. I’ve been entertaining ideas of building a shelf, though it would be expensive, time-consuming, and you’d still be able to see all of the ugly cases. But then we finally made the mental leap needed to take the discs out of their cases – originally we were thinking wallets, but Kevin found these for even less money: 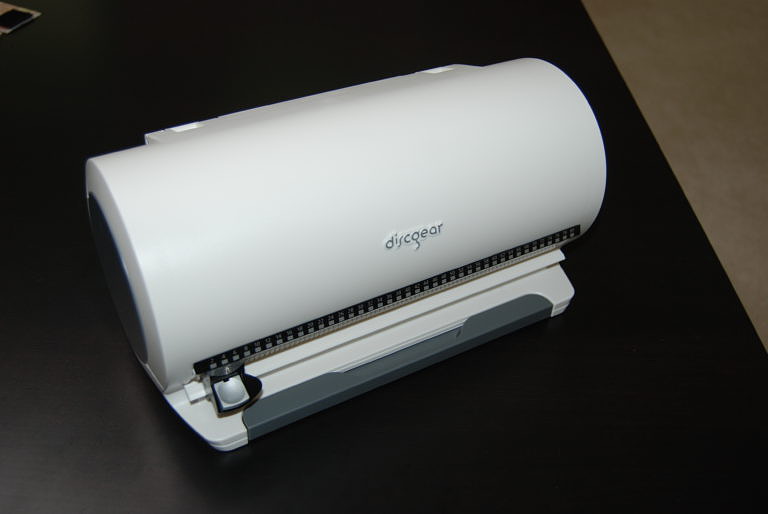 Three of them hold all of the DVDs, plus extra room if we find ourselves with more. Here they are on top of the old shelves, for scale: 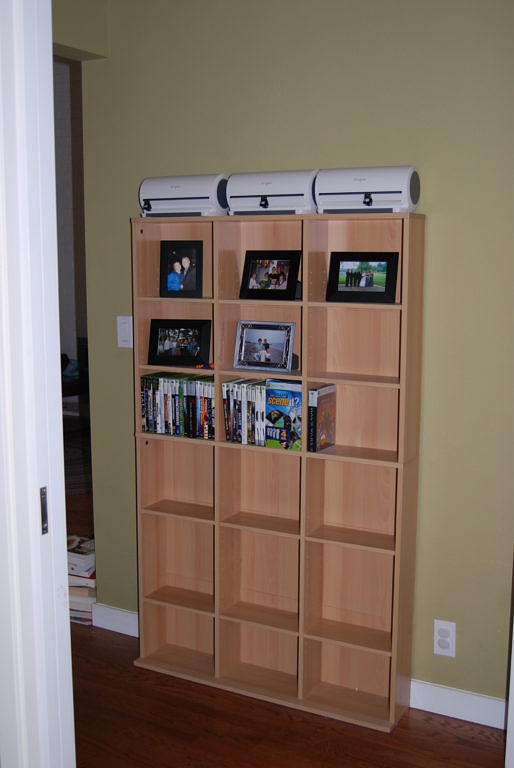 I printed up nice, organized lists of all of the DVDs in the cases – once you know the slot number of the movie, you slide the little table over to the correct position and open the case, and it picks out the DVD for you. Clever. 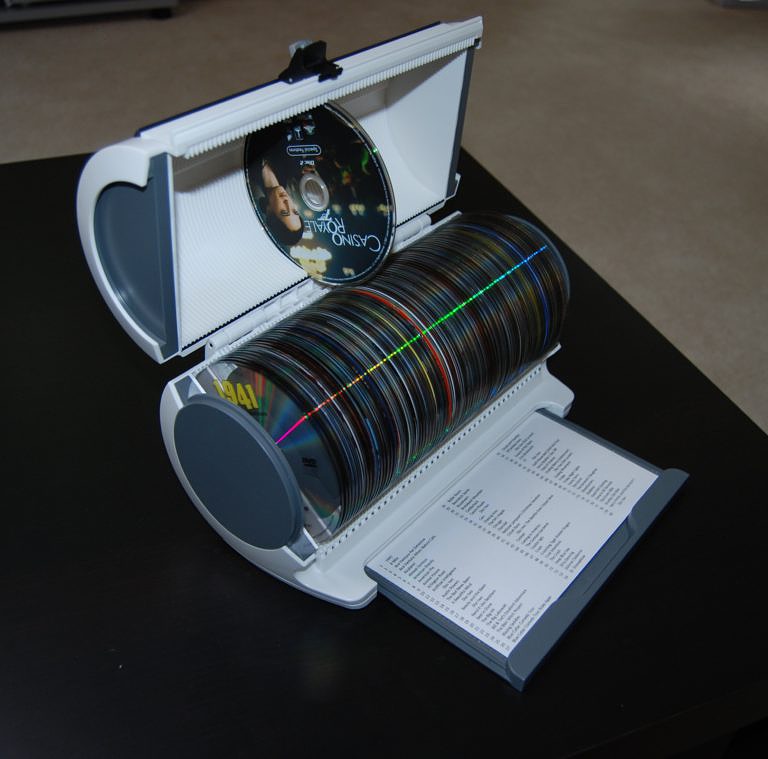 Now these guys can live in our utility closet, the dvd shelf can join the large collection of things out in the garage waiting to be Craigslisted, and we can finally start working on putting the framed photos up on the wall. Nice improvements all around!

Our box of cloth diapers arrived! This is 33 size small Fuzzibunz, and six extra hemp inserts for overnight: 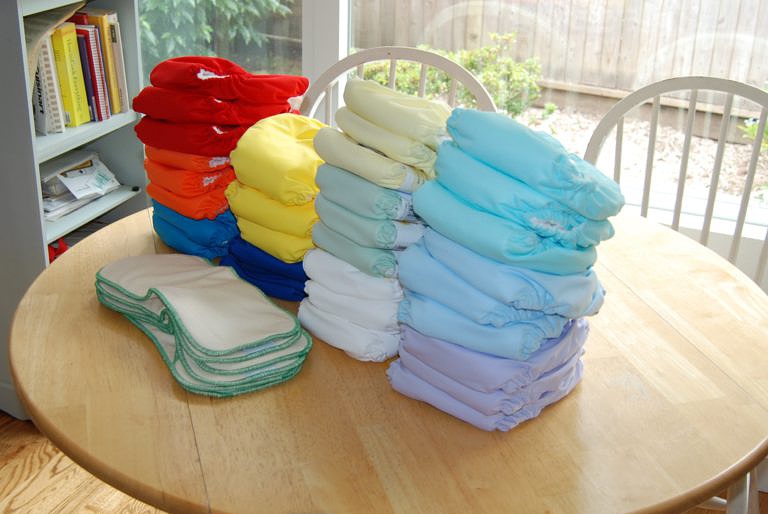 They are really the cutest little things, and they feel great. Here’s one all snapped up: 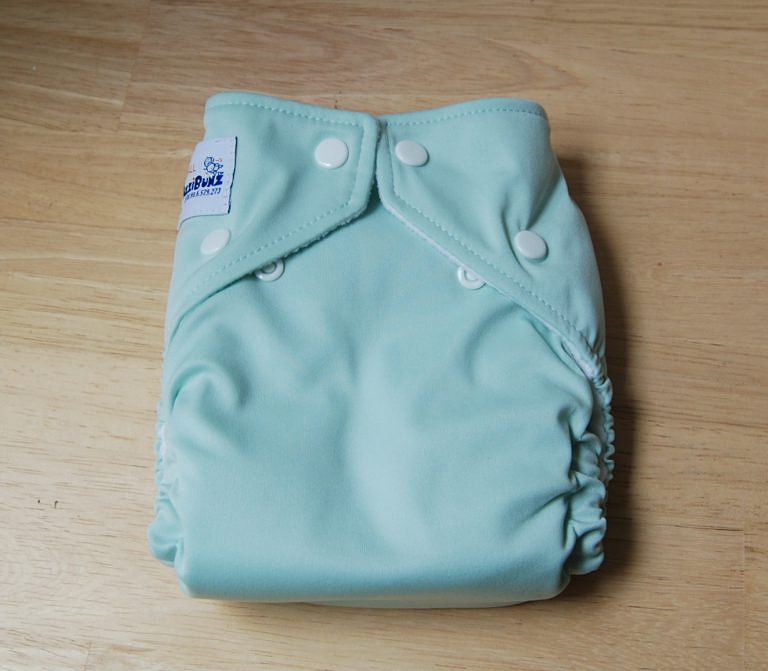 There’s a whole grid of snaps on the front, and the plan is that these should last somewhere past six months, and then we can move up to the medium size which last many kids through toilet training. This brand seems to get the most kudos for fitting babies regardless of how chunky or skinny they are (hopefully all of the online reviews are right), and I’m so glad that they have snaps and not velcro for all of the laundering. 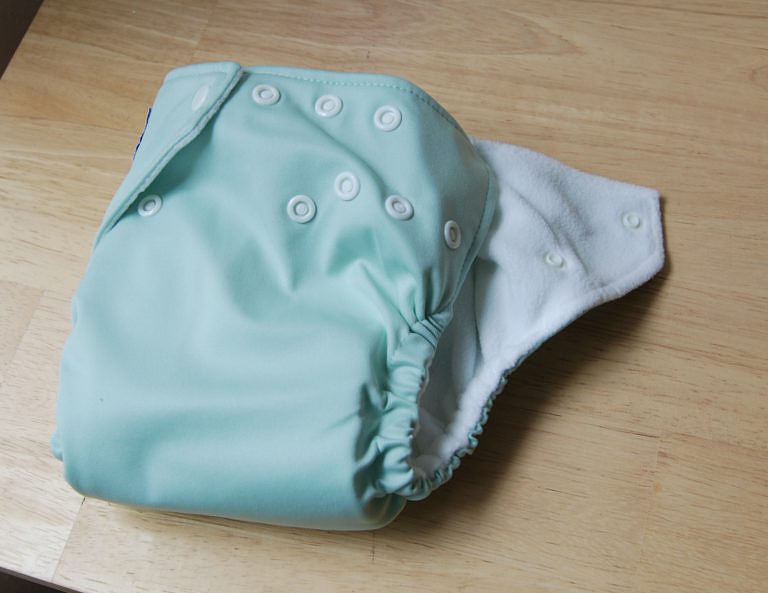 The outside is some sort of PUL fabric (it’s coated on the inside but feels quite lovely and soft on the outside) in pretty colors, and then the inside is fleece. 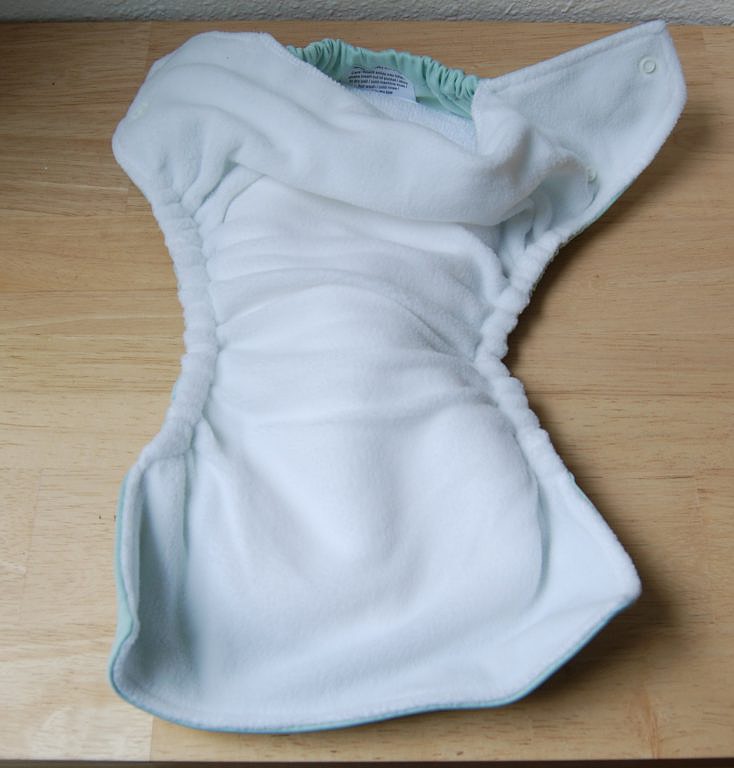 This style is called a pocket diaper, because there’s an opening in the top of the back where you put an insert (the ones that come with it are terry and microfiber, but you can use others as well, like our hemp ones). As they’re used, you separate the insert and cover and put both in the diaper pail. Then after the laundry is done, you put the inserts back in and they’re ready to wear again. (Somewhat time-consuming, but I wonder if that will become something we barely notice or if we’ll begrudge the effort?)

We’ll use disposables until we’re past the umbilical cord stage, then switch to these. I’m all pleased that they’re washed and ready to go – it felt like one of the last remaining things that needed to be taken care of.

Part of moving everything out of my office then re-organizing it to move it back in was realizing how many single skeins or portions of skeins I’ve accumulated over the last five years. Combined with my reluctance to start big new projects right now, I’ve been on Ravelry a lot over the last few days looking for quick, small projects. The first of the tiny oddball projects was a hat for the baby, to match his Baby Surprise Jacket: 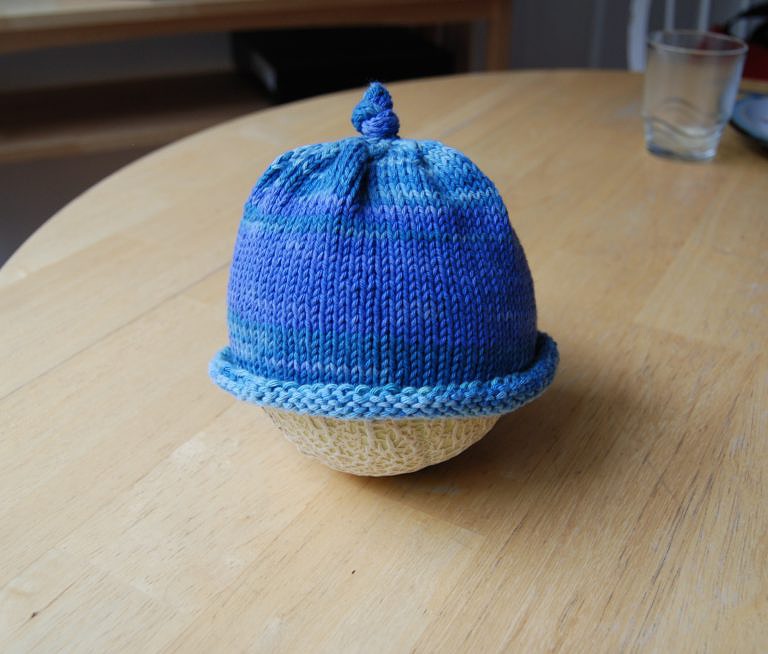 (It’s being modeled by a tiny cantaloupe that came in this week’s CSA bag.) Fun, cute, and one less skein of yarn to hoard. 🙂 Perfect.