There were problems across the board. Running through the positions: Daunte Culpepper, with 1 point even against the Titans, is banished from my team. Alex Smith will be my new starter, and I picked up Buffalo QB J.P. Losman for my bench. My running backs still aren’t that strong (top guys score in the mid-twenties), and will be hurt further this week since Shaun’s out with the broken foot. I just plain played the completely wrong wide receivers. (Look at Keyshawn Johnson! Argh!) L.J. Smith played well for being hurt — I’m hoping he keeps hanging on. The Seahawks D sort of fell apart, but at least I didn’t play New England instead… It may be time to consider picking up a new bench D. And Elam did alright, but after this weekend, I dropped Gostkowski for Rian Lindell (also Buffalo).

This weekend I play my boss (who’s loaded up with LaDainian Tomlinson, Laveranues Coles, Donald Driver, etc, and has been scoring in the 90’s). I don’t expect the post-weekend report to be much better next week. At least the Eagles are playing for Monday Night Football!

Life has been all busy recently, and I’ve been feeling stressed, and I decided recently that part of the problem was that I never bought a calendar for 2006. I’d tried to, but I didn’t find one I liked, and then I waited for them to go on sale, but by the time they did I was busy interviewing for a new job and I never made it out. So, in an effort to free up the part of my brain that’s currently devoted to remembering the next three weeks of activities, I decided to make a little one to carry around with me.
The cover is a cutout from my ’05 calendar (I love the tree trunk): 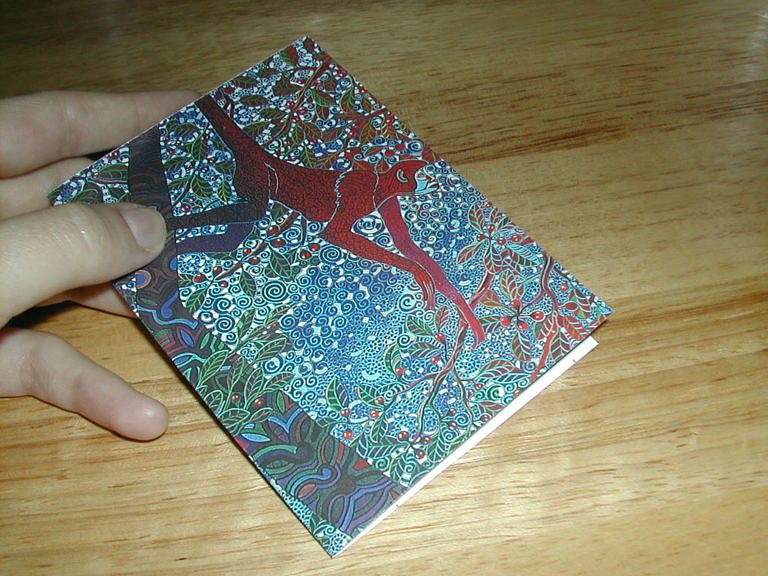 And the inside is printed out screenshots of the Google Calendar that they’ve rolled into gmail. 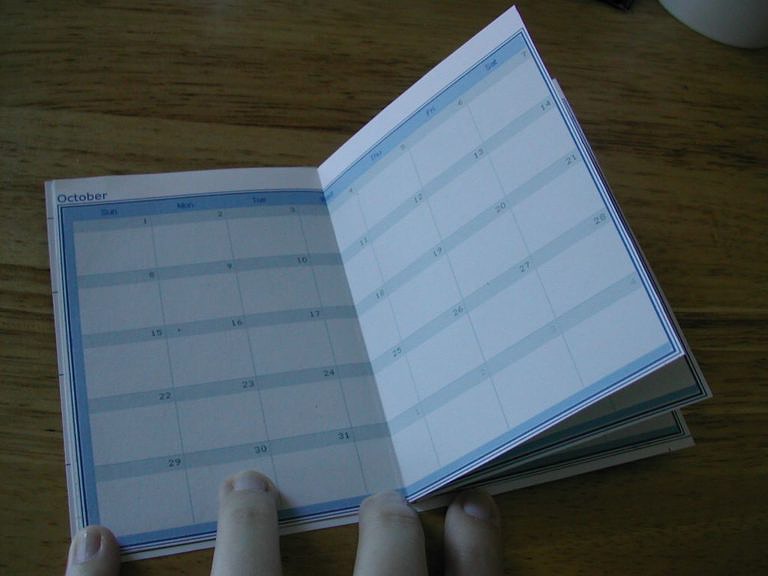 I suppose I could just use the gmail calendar online, as it’s meant to be used, but for some reason that crosses my privacy threashold. So tiny carry-around calendar, it is.

Thursday was the company meeting, held in the Mariners Stadium. Definitely a “drinking the company koolaid” experience, and now everyone wants a Zune and is excited about Live. 🙂

Choosing to be more constructive with my time than the dimwit behind me who brought the airhorn, I made it through a significant chunk of the back of my new project — a hooded vest with cables. 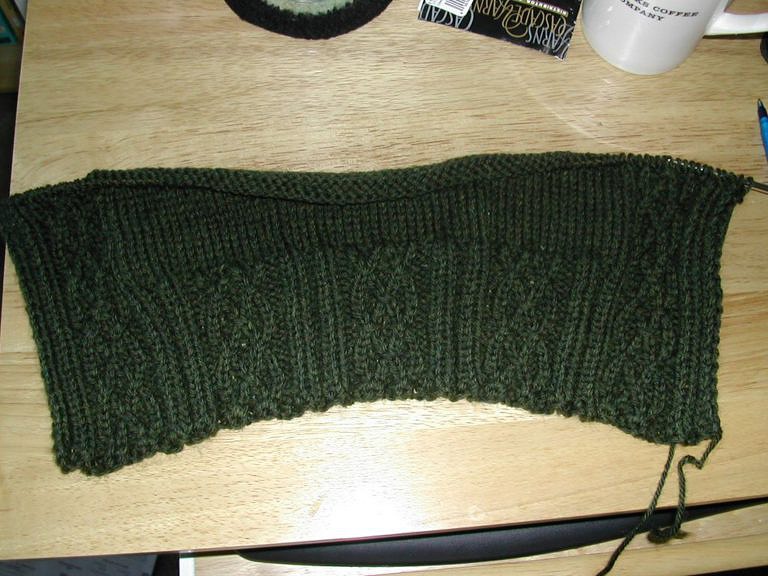 This is definitely an “as it goes along” sort of project, and there’s no pattern, so we’ll see how it turns out. It’s based loosely on a non-hooded fleece vest for the dimensions. I’m using the second half of my 24th Birthday Yarn (a heathery dark green shade of Cascade 220) from my brother and sister, which is fun. 🙂 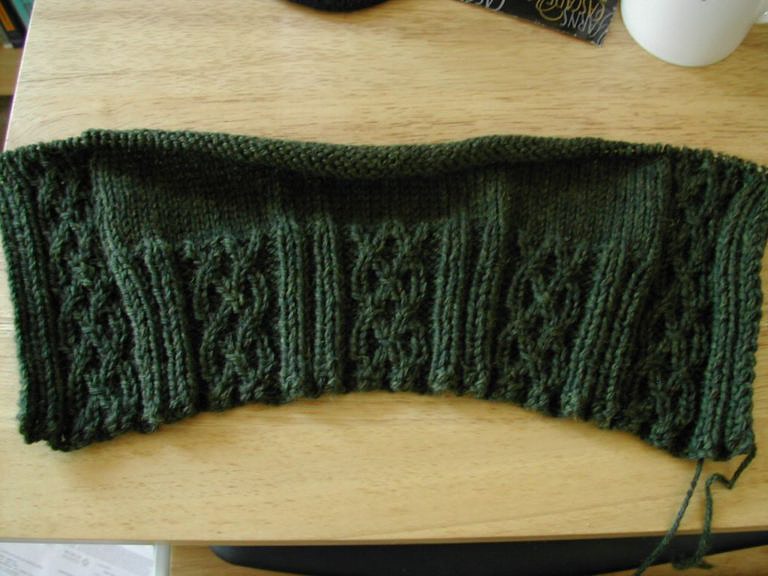 If you put the camera in sunset mode, you get great cable definition on dark yarns. Cool!

And now, football. 🙂 Leading into the weekend, I dropped Brian Calhoun (backup RB, Detroit) for New England’s new kicker, Stephen Gostkowski. Jason Elam only slightly impressed me in week one, and I felt like New England is much more likely to get their kicker in range than Denver seems to be… This will clearly require further shuffling, but Calhoun wasn’t helping anything and so after the Patriots released Gramatica, I considered it worth a tryout. (Plus, my other NE rookie is doing great, so why not??)

The utter loser of the week was TO, who earned one point before he broke his finger (requiring surgery and a multi-week break — at least they have a bye next week). I really don’t mean to sound cold hearted, but I was hoping he’d make it through a lot more of the season before he managed to take himself out. :-/ At least I have Deion Branch ready to come in next week for Seattle. L.J. Smith did great, but now he’s injured, too. The Seattle D and Laurence Maroney were both solid again, which is awesome, and Elam rose to the challenge and gets to keep his spot next week, though I’m holding on to Gostkowski. Quarterbacks are a major issue for me right now. Culpepper is seriously underperforming, and Kerry Collins on the bench isn’t looking like a good option at all. I’m trading Collins in so that I can pick Alex Smith up from waivers, who’s been getting much better numbers… we’ll see? I also decided to trade Santana Moss (8 fantasy pts last week, 7 points this week) in for Jerricho Cotchery (NYJ) — a pity since I like Santana Moss, but with TO hurt, and Deion Branch still sharing a position, I need a stronger WR for next week.

So. My ring is here! 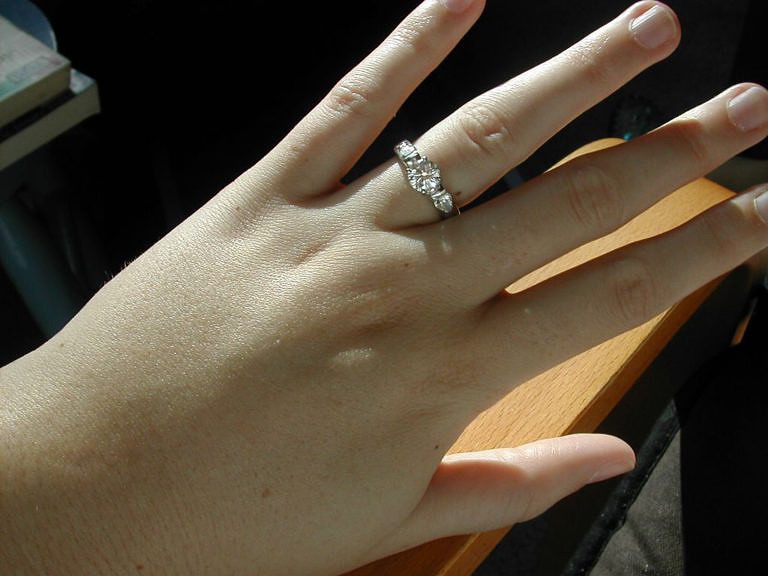 I waited to post because I needed to get it resized (apparently I have small knuckles? It kept nearly flying off, especially at work with the A/C). I’m completely delighted with the way it came out. There were two rings that I liked a lot in the store, and just when I reached the point of indecisiveness, they offered to combine the pieces I liked of each into a custom ring. So, I have the three stone ring with pear-cut diamonds on the sides: 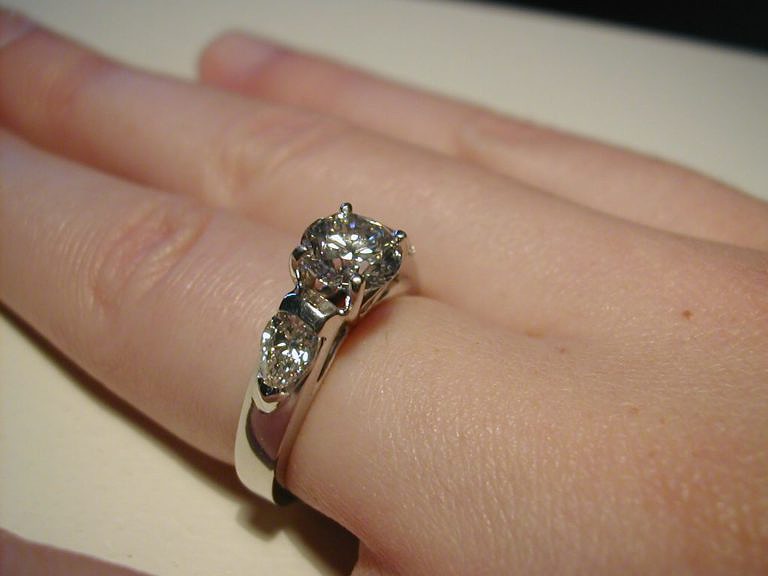 And, I got to have the side detailing that I loved: 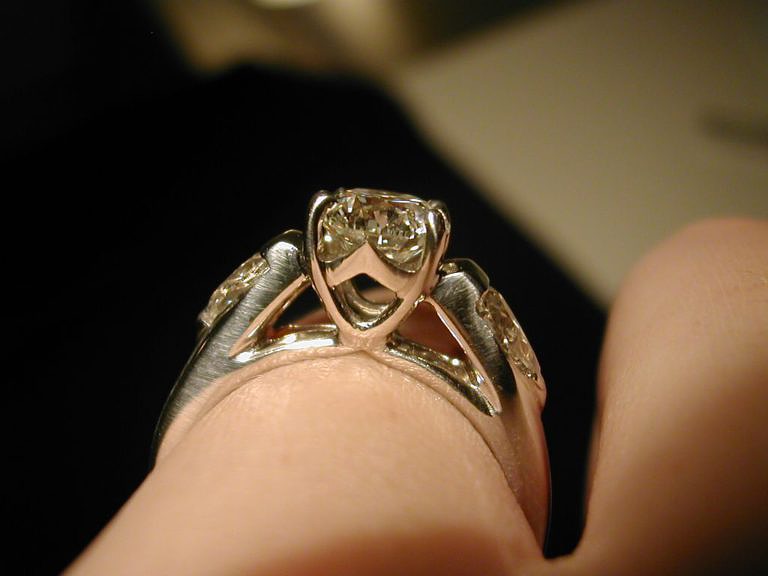 (The platinum and the diamonds both look very orange and yellow in this photo, which should entirely be attributed to the skill of the photographer, not the actual color of the stones or metal. 🙂 I spent ages trying to photograph them, and while these pictures are a marked improvement over my first attempts, they’re still not even close…)

I had to work very hard to limit myself to three photos, but I didn’t want to get boring. If you want to see more, click here and here. 🙂 Yay!

…and in this case, the Joneses care deeply about buying vegetables. So, listening to all of the “organic vs. not”, and “buy locally vs. not”, and “cheaper!” discussion, I decided to go to the Redmond Saturday Market.

I used to go to farmers markets in Boston all the time because there was one outside my office on Wednesdays and Fridays, and another halfway home at Copley on (I think) Thursdays. But, like public transportation, that more or less went out the window when I moved to Seattle. Really, it’s ridiculous not to go, especially given that with the money saved on veggies, you can buy gorgeous fresh flowers! (The ones in the photo were $5. It’s *such* a pity that the Seattle flower sellers don’t do weddings in the Boston area…) 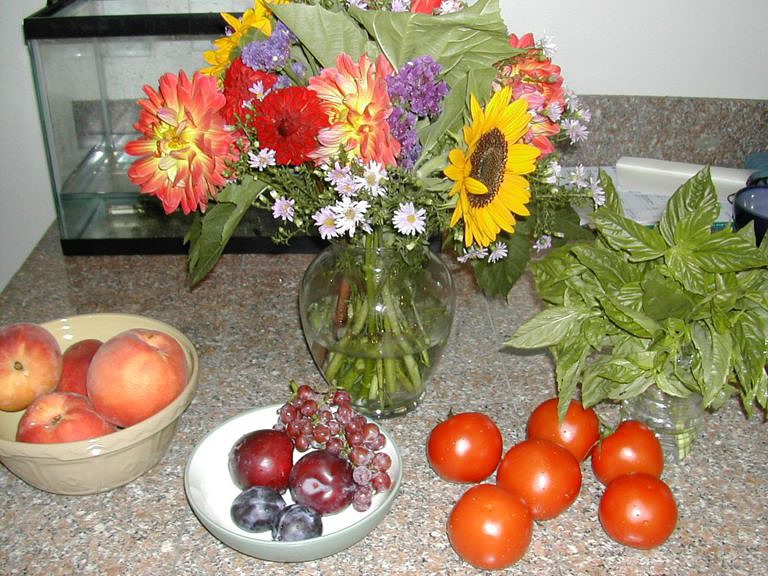 The only shame of the matter is that everything isn’t clearly labeled, so I wasn’t entirely sure what I ended up buying. For example, those are definitely Champagne grapes, and I would have classified the guys in the middle as plums… but the smaller, bluer ones on the left also seem like plums…?? 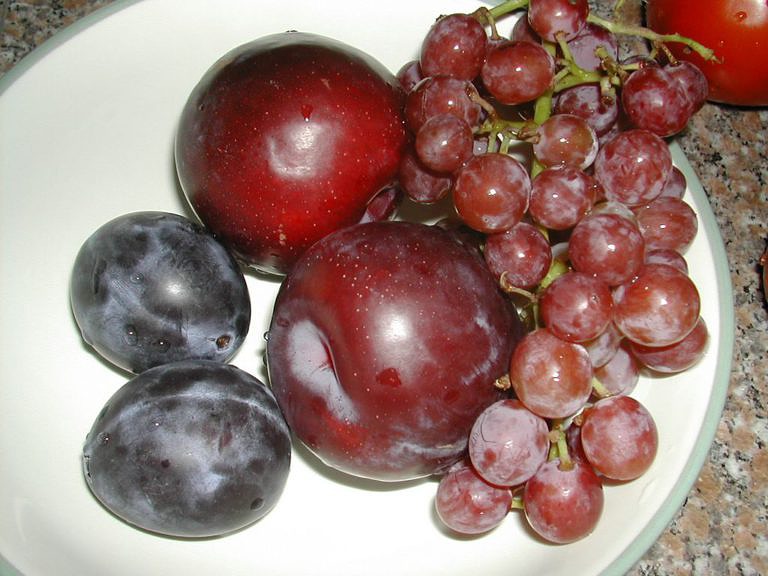 Help?! Can any of the veggie aficionados help determine what fruit I have? It’s delicious…

He had palicintas (Hungarian for crepes) for dinner last night. This was one of my favourite dinners as a child, because in addition to being delicious, my mom would put out the lazy susan and load it up with fruits and fillings and assorted varieties of sugar — the end result tasted like dessert and was wonderfully close to toeing the line of playing with your food. There were a few rules as a nod to basic nutrition: you had to have yogurt or cottage cheese in all/most, and I seem to remember that including multiple kinds of sugar (white, brown, jam, honey…) per palicinta was frowned upon.

Apparently I’ve cultivated slightly different tastes as an adult, since our topping options this time around included chicken, feta, goat cheese, tomatoes, mushrooms and onions sauteed with balsamic vinegar, etc… We had raspberries and ice cream, and it takes a long time to cook a full batch of palicintas, so Kevin decided to work on a chocolate fondue-ish sauce to go with the dessert options. He found a recipe in the Joy of Cooking, and was working along with that. It called for evaporated milk, and we only had regular, condensed, or dry. Dry seemed the closest to him, so he went with that, but after it wouldn’t boil, he added a bunch of skim from the fridge. By the time it was becoming very clear for me that something had gone awry, he felt that he’d committed far too much time and effort to just give up. At the 45 minute mark, the dense finished product clung to itself and would have made an excellent, if greasy, hockey puck. 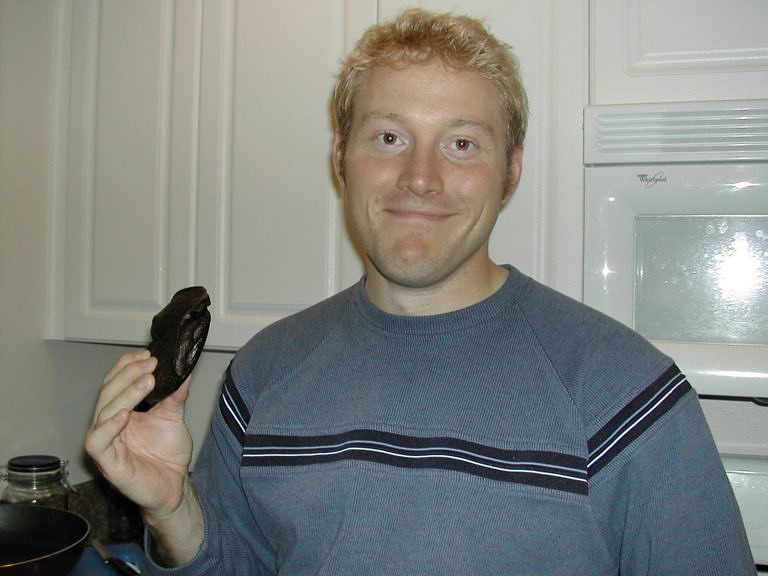 Luckily the rest of the dinner was markedly more edible…

My friend from high school, Kristine, is moving out here for a masters, and she drove into town on Friday with Liesel (another high school friend) and her boyfriend, conveniently also named Kevin. They all stayed the night at our apartment, which was such fun, especially given that they showed the appropriate degree of interest in the fish tank. 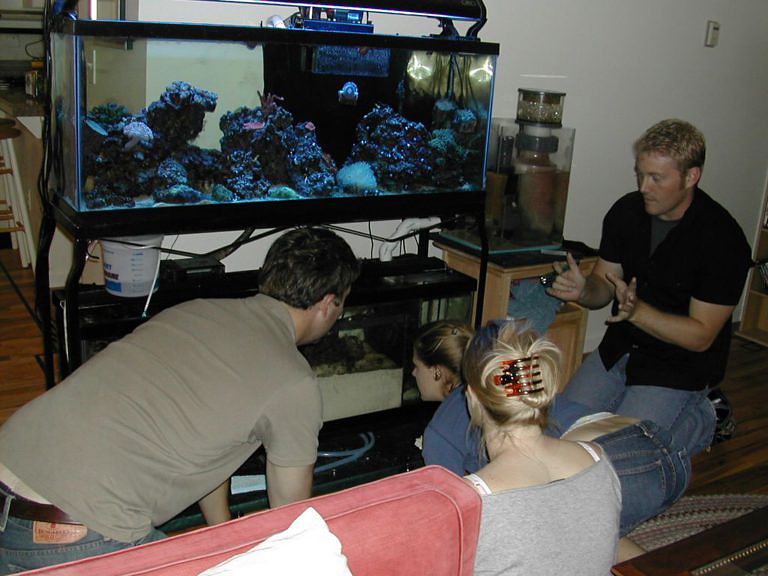 We stayed up past five (!) catching up and watching celebrity jeopardy, and then Kristine went to settle in at her new place and Liesel and Kevin flew back to DC.

I’m so happy to have a new old friend in town, especially given all of the recent attrition.

It was also so fun to see Liesel again, since it’s been ages and she’s up to all sorts of interesting things. (Such as: I was all impressed that she’s training for her second marathon. If you like giving money to worthy causes, she’s running for the Whitman-Walker clinic in DC, which cares for AIDS patients.)

After all of the heckling I get every time a fish post makes its way onto the blog, I wasn’t exactly expecting fantasy football to be a winner of a topic. Apparently, though, I am not the first knitter to like football, and the response has been all sorts of positive. So, it looks like I have a topic for Tuesdays. 🙂

I won week one, 58-43, despite the worst efforts of Mr. Alexander… My team, with the assorted points they earned:

Clearly Shaun Alexander was the lemon of the weekend. (Here’s hoping that he gets his act together and that Walter Jones stays/gets well, or this may become a frequent lament.) Culpepper wasn’t amazing, especially since he passed off touchdown runs instead of throwing them, but our league rules are difficult for quarterbacks. Maroney did a great job for his opening game. (Yay, rookies. Yay, Patriots.) T.O. did exactly what I hoped he would, though if he’d been showing up to practice and Drew Bledsoe had any idea how fast he could run, his numbers would have been much better. I’m worried that Bledsoe won’t stay healthy and TO’s numbers will drop (and Marion Barber’s would too, which would hurt the bench.) The Seahawks defense was awesome. And Deion Branch got traded to Seattle (woot!) so not only will the local team benefit, but he’s matched with a great quarterback and should start delivering points in a week or two. Sweet.

And, to mollify the knittings who couldn’t care about football, here’s what I spent the games working on: 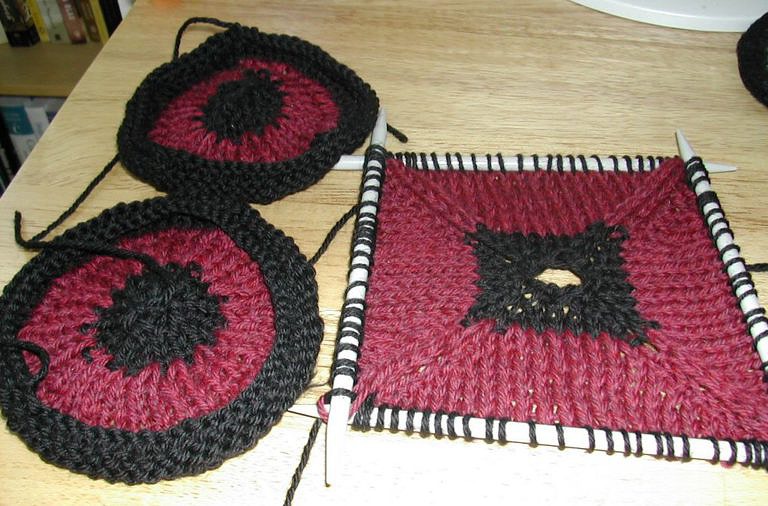 Coasters to match the new(ish) couch. 🙂 The round ones are from my standard knitting at knoon pattern, and I have a mitered square on the needles. The yarn is Cascade 220, of course. I’ll felt them after I finish a second square. 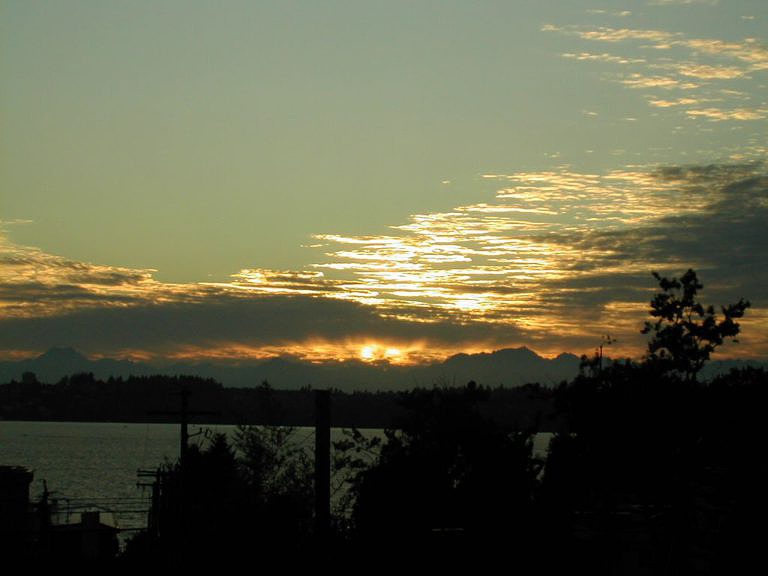 This one had a crazy ring of glowing clouds, and beams of light radiating out from the mountains…