Our ride from Victoria back to Seattle was lovely. We left at 7 pm when the sun was starting to turn down to the horizon and the light was that hard, bright, last-gasp of the afternoon intensity. The Olympics were out floating way up above the clouds, but not clear. 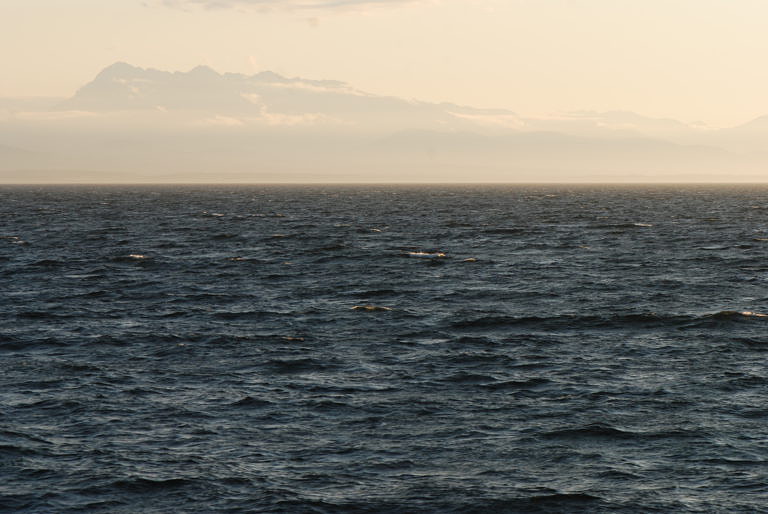 I was so excited to see this view — the evenings where the mountains are crystal clear don’t have good sunsets; the color is over in a flash and darkness falls so soon afterward. As the sun got lower, the view got so much sharper and it became easier to differentiate the foothills from the banks of clouds. 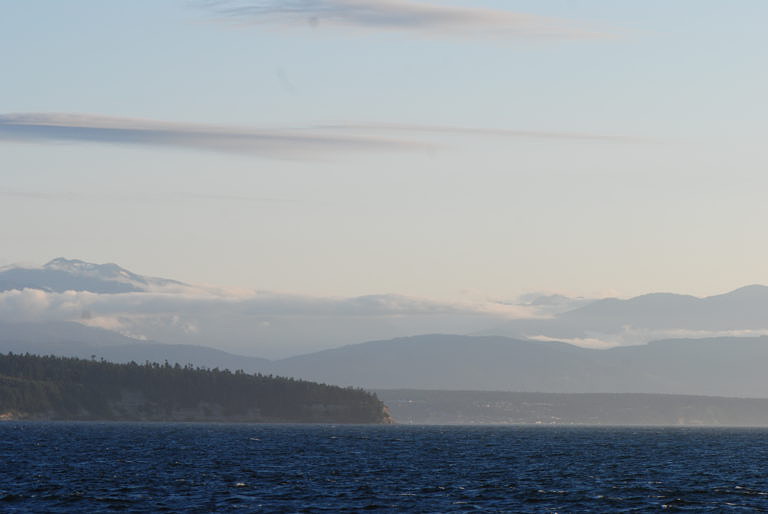 There were some huge ships that passed us. This one was particularly spectacular because it was so far away and still looked enormous. I wonder where it’s off to and how quickly it will get there? And who the crew is and if they’ll be away long? 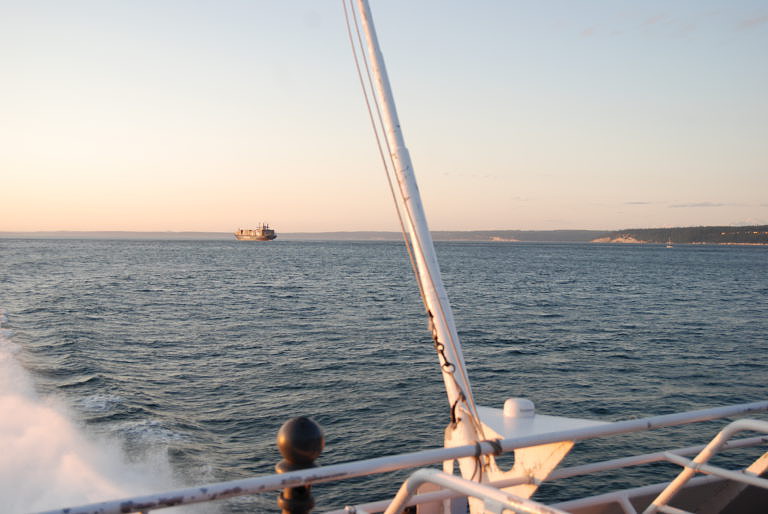 You could also see the swells in that shot — they said it was 5-6 feet? That’s probably not huge in ocean terms but it was enough that it was hard to walk when there wasn’t something to hold onto. 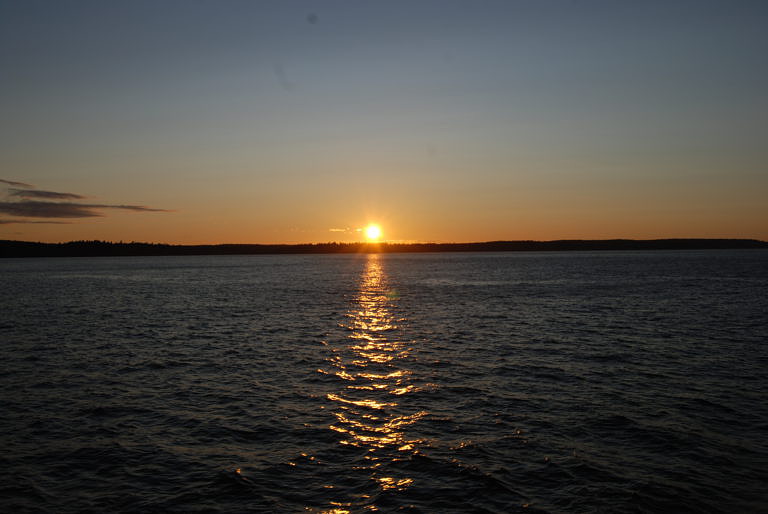 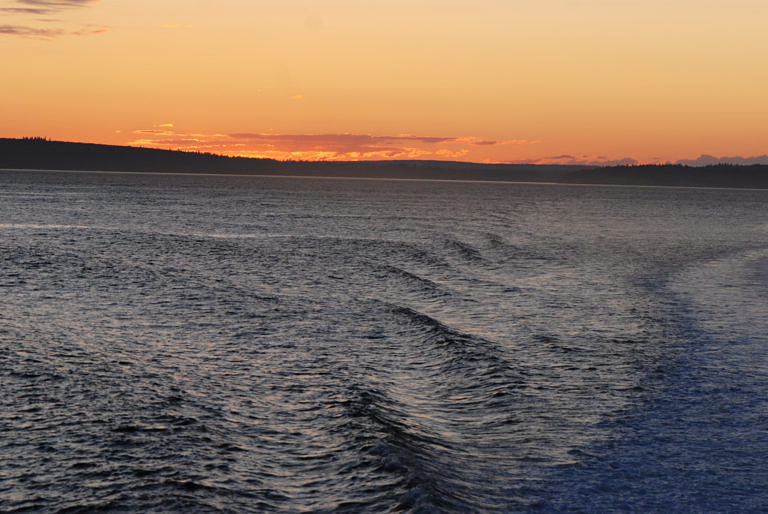 I love these colors — navy shoreline, blue mountains, all of the water retaining its light, and the sky all peach and pretty. 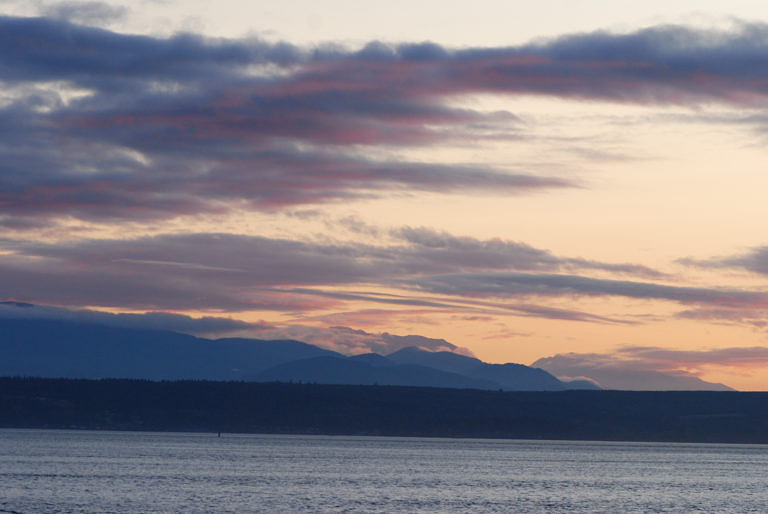 In the foreground, Point No Point (one of my favourite disgruntled pioneer & explorer names on the state map) and to the right of it, the entrance to the Hood Canal from Puget Sound. We brought along our little laminated state map with the zoom in of Seattle and Puget Sound so that we could follow along as we travelled. It was neat to come across landmarks from earlier travels (Port Townsend, Hurricane Ridge) that we could ID from the water and use to reorient ourselves. 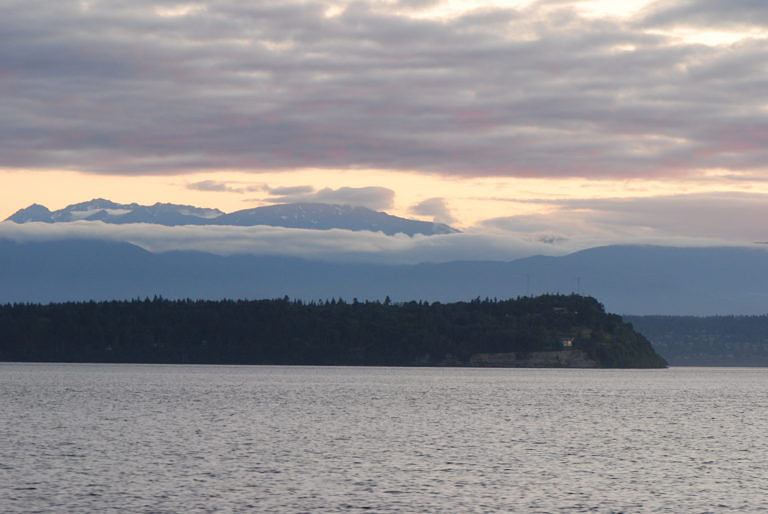 Pointy Olympics poking up through the cloud bank. Those mountain tops are so high up — they’re breathtaking. 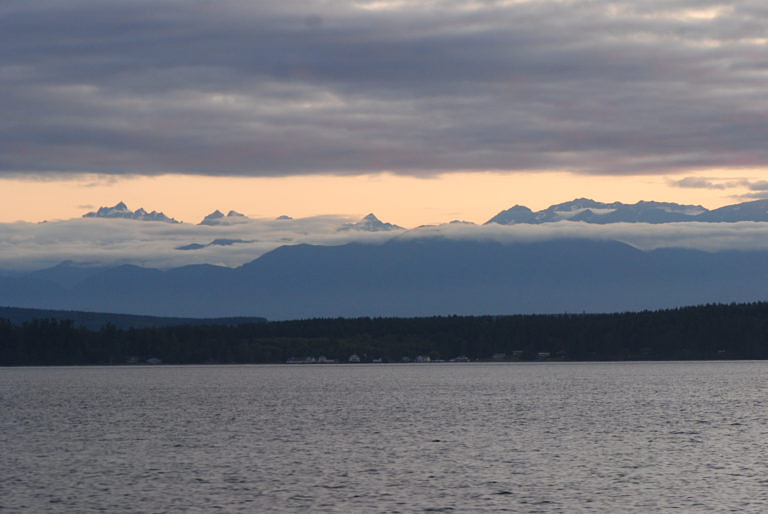 Volcanic Mount Baker (the big white trapezoid on the right) and the northern Cascades. 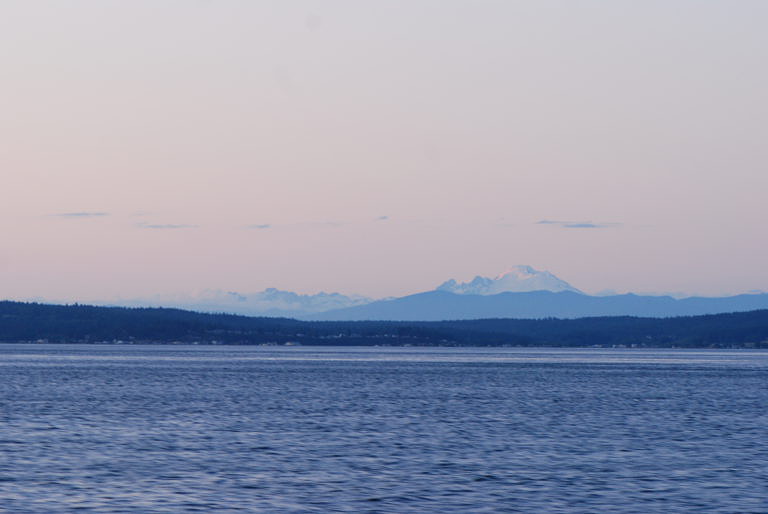 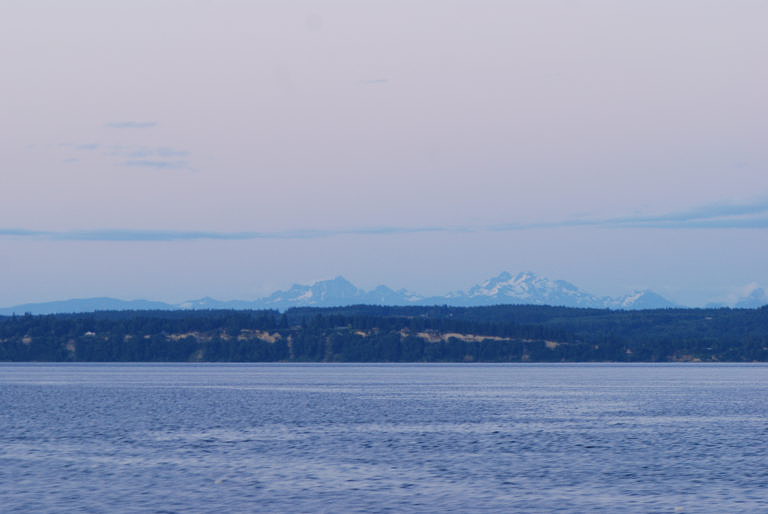 And then back to looking west at the Olympics – tiers and tiers of mountains going back into the distance. 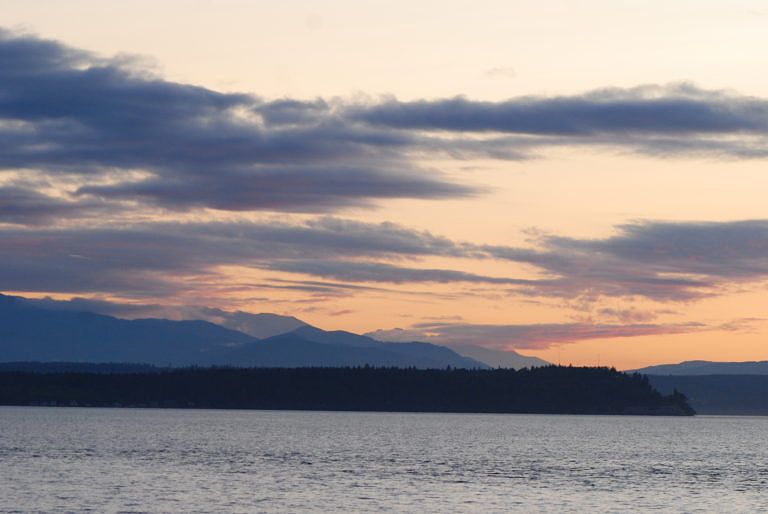 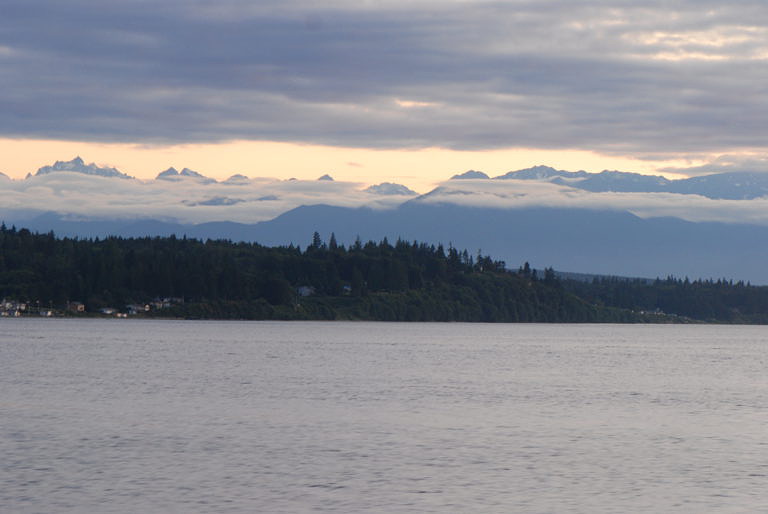 And the last shot before it got dark. Here’s Rainier, huge and floating. Those teeny little buildings you see to the right of it are the City of Seattle. 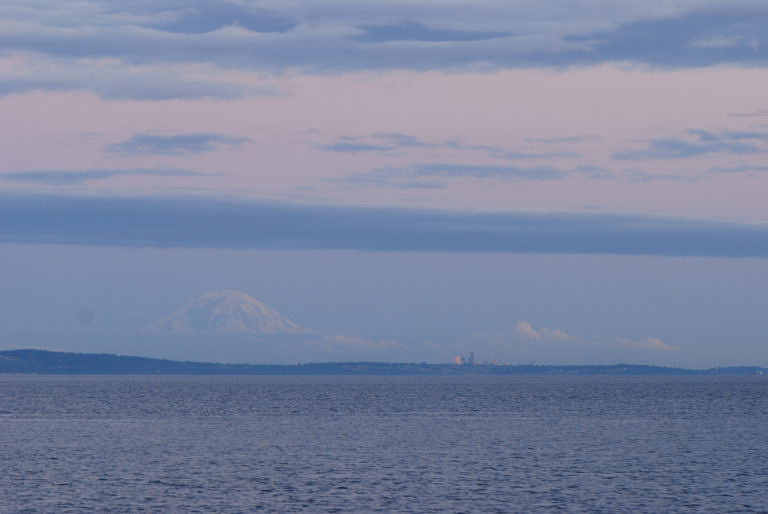 (Click that one for the bigger view, even if you don’t do it for the rest of them. It’s an arresting view. Majestic and deeply sobering. People are so little and volcanoes are so big.)

We had a contractor that the fish store recommended (he used to also run the Puget Sound Aquarium Society) come in to reinforce the floors so that we’d see less water movement when people walked by. He took care of all of the wood work, cement donuts, and pipes, and now everything feels much more stable. We also got new vibration-dampening feet for the washing machine and dryer which are amazing little things even if they were a bit of a pain to get in place. So, vibration and floors taken care of, the next big issue was the flow through the sump and refugium. With the new, reduced-flow pump in place, we tried the plumbing one more time before my mom’s visit. Pouring water into the back compartment (at left) in the main tank, and watching it filter into the front compartment through the grate. 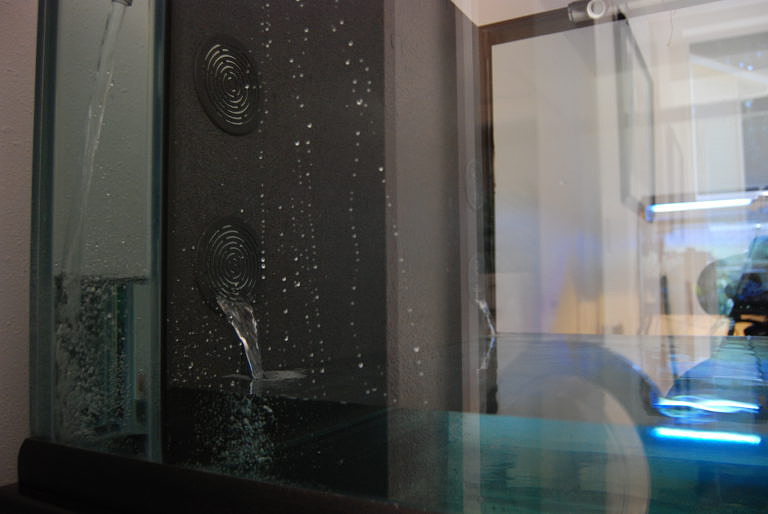 The initial tank filling went well, but even with the lower-flow pump, the flow through the bottom tank is too slow. Major bummer. This means redoing a bunch of the plumbing, holes through the walls and stands, and ordering larger bulkheads so that we can expand those pipes from 1.5” to 2”. 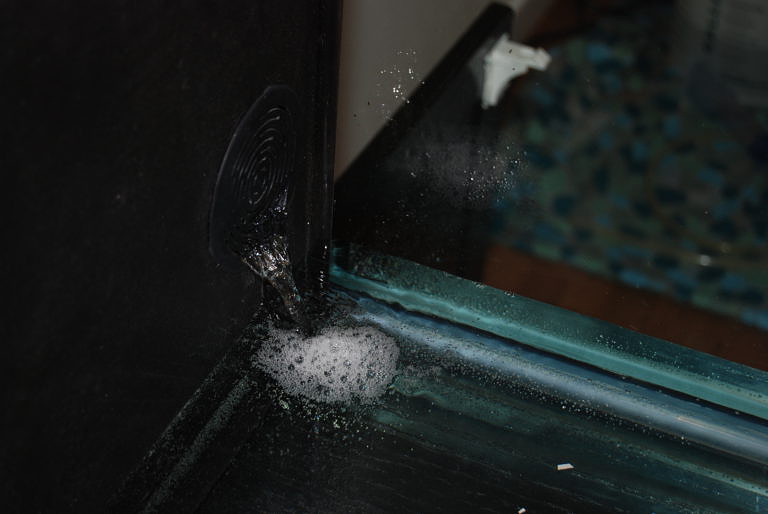