We’ve had many fish over the years and many have died, but Click and Clack were our very first fish, and I’ve loved them for a long time – days shy of 11 years.

When we got them, Sharon was still in college and hunting for her first job, Bush still hadn’t been sworn in for his second term, the Red Sox were only two months recovered after winning their first world series of the 2000’s, and I was still spending my days in our Kirkland apartment, waiting for a software job to appear from the ether. (It would, in just three short weeks.) The blog was barely born. We named the tiny clown duo for the Car Talk guys because they were brothers (then. Clownfish are hermaphrodites.) and seemed to just yap and yap at each other.

Clack died this afternoon, somewhere in the commotion between the end of naptime and Kevin’s next salinity check. Clack fell (drifted?) down to the sand, and we notice the snail and crab commotion before we notice a clownfish missing. A horrible joke, but we said that Clack’s last gift was to die in easy range of a net instead of wedged under or inside a rock like a certain gramma we still remember… He looked hopelessly wrong scooped out of the tank in a plastic cup – a fish who should be swimming. Clack was fast (especially the few times I had to scoop him out of the tank, to move), bright, food-motivated, and a treat to know. She laid many, many sets of eggs. Click and Clack were captive bred and seemed mostly unaware of appropriate hosting spots (we weren’t the anemone type), choosing at different times the plexiglass, the PVC pipe, and the cleaning magnet, but also xenia, the leather, and bare rock. Clack laid the eggs, and Click fertilized them. They spent a long time back and forth competing for the right to be female before Clack ultimately won — first one slightly bigger, then the other, before settling into their roles. They survived our fish-keeping learning curve as well as the 2006 windstorm, a move to a new house, a move to a fancier tank, and countless vacations that we took to visit family and friends, leaving them with friends and neighbors roped into the role of “fish person”.

We will miss Clack, the tank is missing a major character. I checked, Click was swimming in their sleeping spot, solo. 🙁

A sad night in the Weston house and fish tank. For more Clack posts from time gone by, see the ones tagged fishtank. I particularly love this one from 2008, with video.

Our glass-cleaning magnet has been appropriated by two nassarius snails who decided to lay eggs on it! 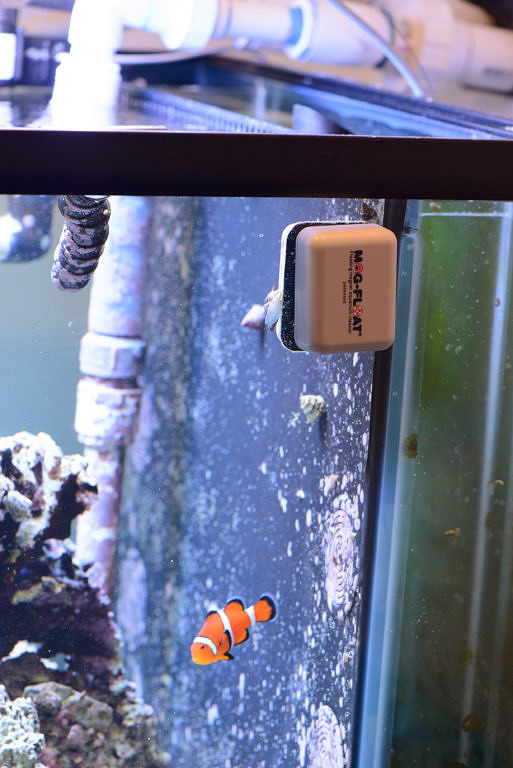 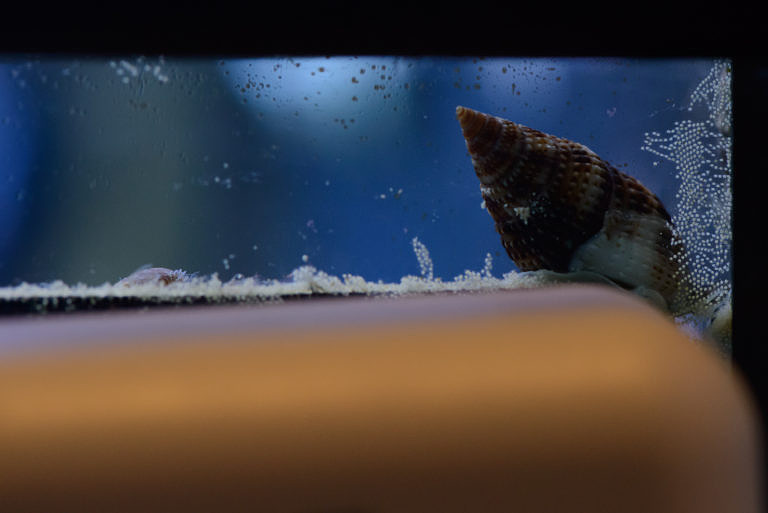 They went all around the outer rim – you can see the eggs three and four thick as well as a few threads of them. 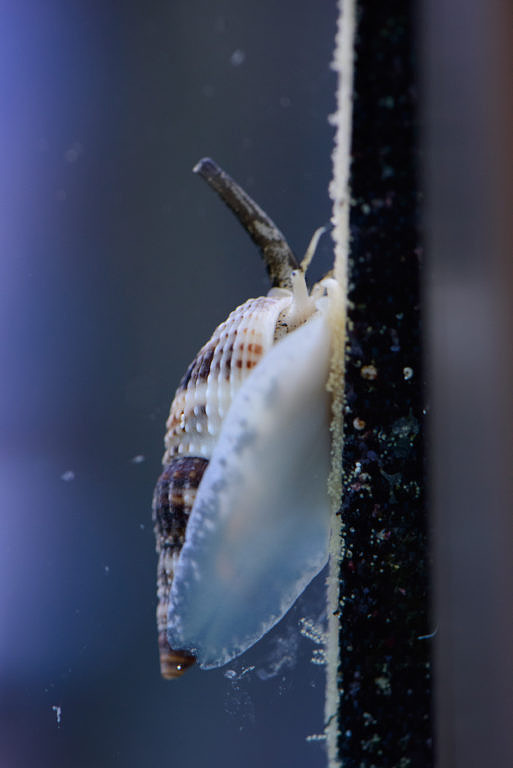 How neat! I wonder if the eggs/baby snails will be able to survive in our tank? 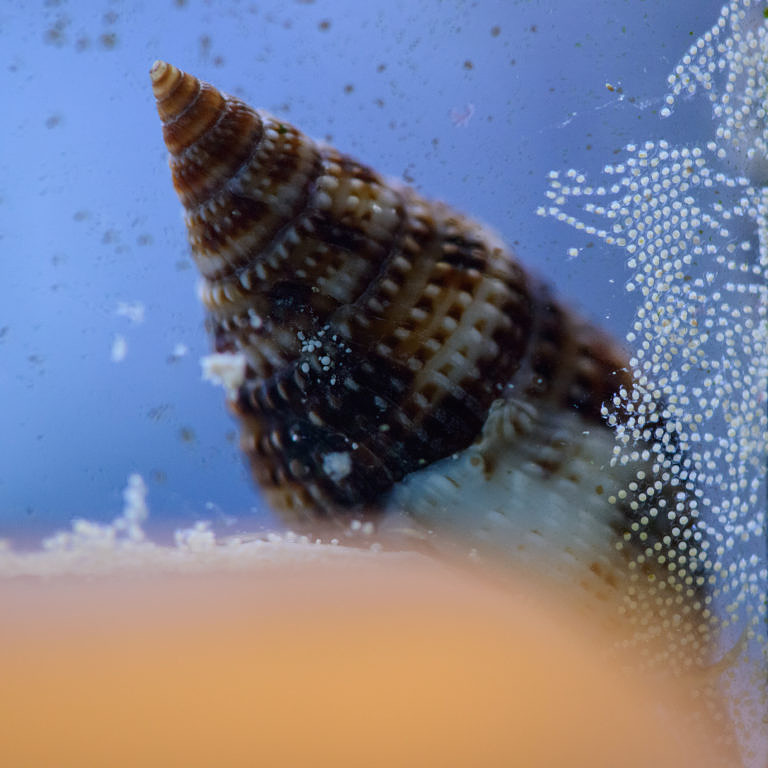 In other snail news, we’ve discovered that the “naked snails” are actually called stomatella snails, and the mystery creatures that Kevin’s been calling flatworms are actually chitons. Neat!

We were talking on the brown couch when Kevin looked up and said, “Um, Clack?” and ran for the camera. 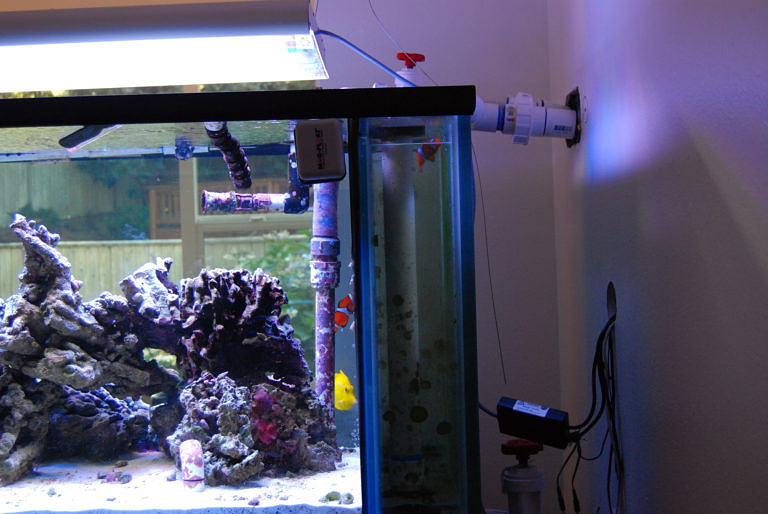 He must have jumped over the top of the divider? 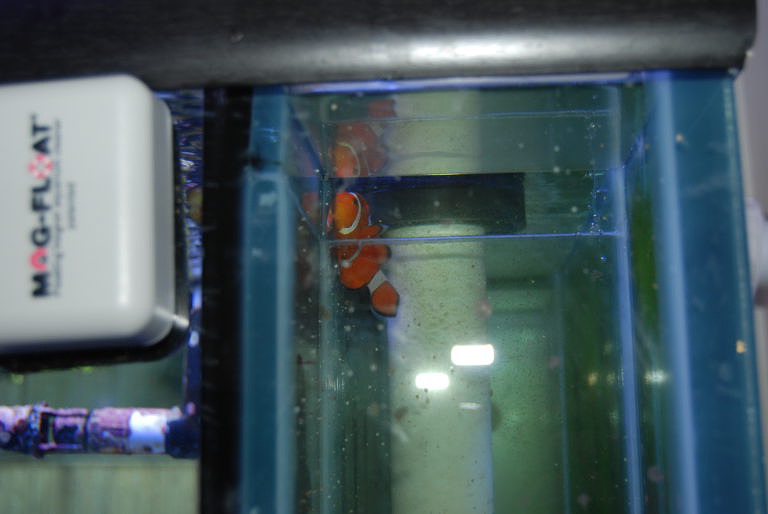 Luckily, it wasn’t too hard for Kevin to scoop him back up over and into the main tank where he belongs. 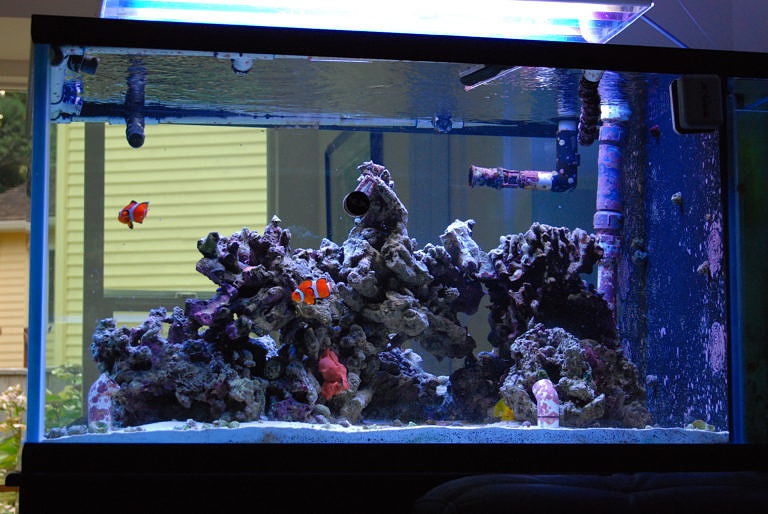 We decided to sneak in another round of corals before the baby comes. Last time we plunked them in the main tank after a fresh water dip and then felt worried about it; this time we decided to quarantine. 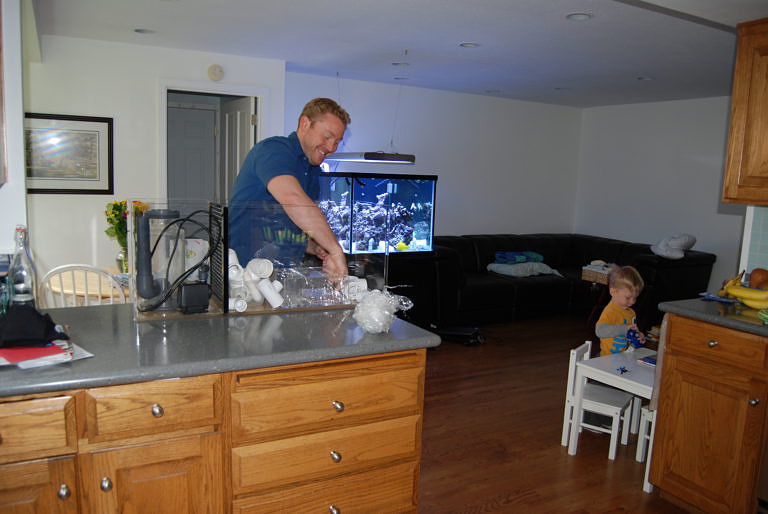 This quarantine tank was a custom design, based on some sketches I made. We wanted something that the old skimmer could sit in (since we’ve always had water quality issues with the tiny quarantine tank). This tank is still small enough to sit on the counter, but the left side can hold the skimmer, there’s a removable mesh panel, and the right side can hold corals and fish. Yay!

We ended up with five corals – red mushrooms, purple mushrooms, blue and tan zoos, and two new-to-us ones. They came with some starfish, a horrible red worm that we’ll have to try to catch, and a tiny crab. Neat! Glad we quarantined. I’ll have to get pictures after we get them in the main tank.

We finally got a second glimpse of this creature! 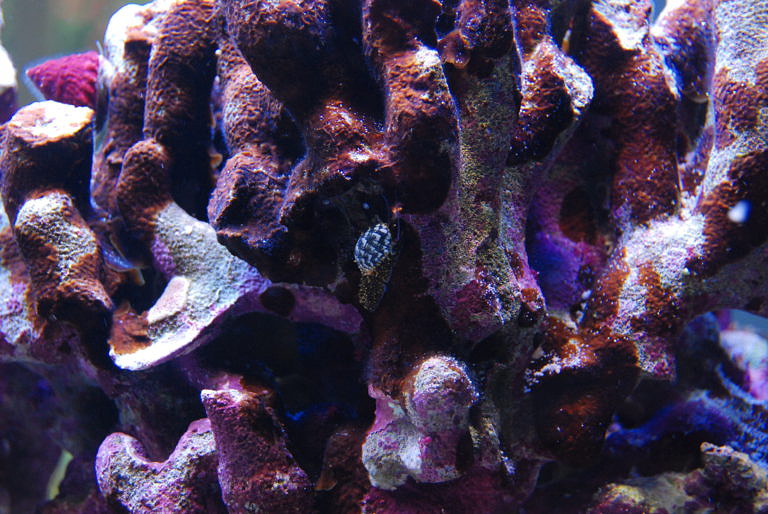 No idea what this is called. We’ve been calling it the “zebra naked snail” – it’s a black-bodied snail-like creature, about an inch long, with yellow spots and a white and black patterned mini-shell. I’d seen him for an instant a few weeks ago (by the time I realized that I had no idea what he was, he’d vanished), and then Kevin got photographic proof of the second sighting. 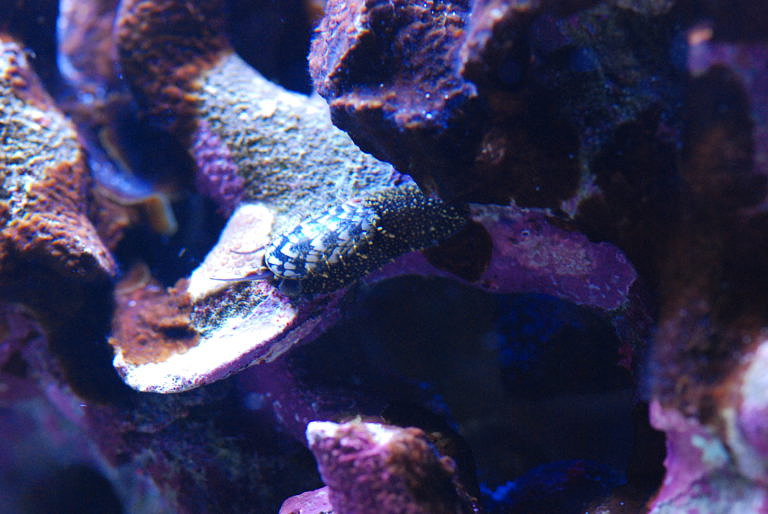 We went to the fish store on Saturday, and put some gift certificates from Christmases past to good use, buying our first corals for the new tank. So exciting! We now have a little pink pom pom xenia in the back, pulsing away. It’s in a pretty low-flow spot near the back wall, and it seems happy there. 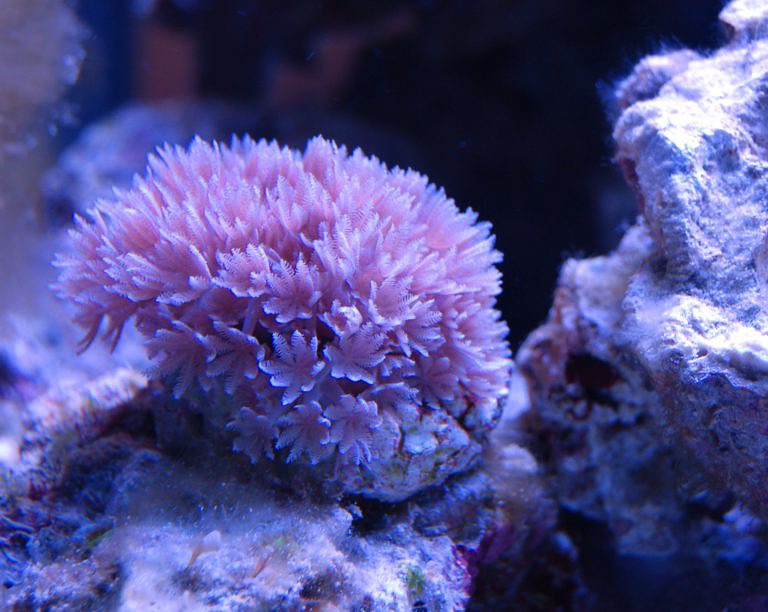 And some spectacular zoos – half are shades of kelly green with yellow fringe, and the others are red with blue centers and yellow fringe. (Note blue-legged hermit crab, just to the left.) 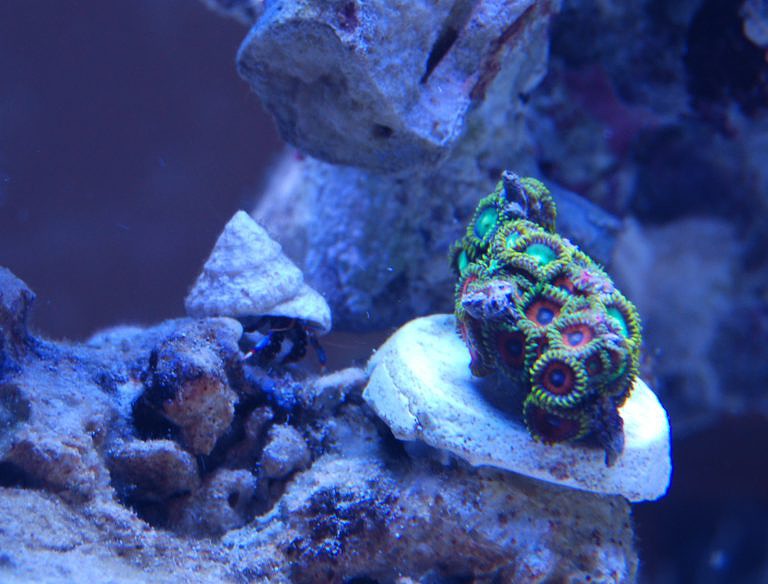 It’s a little frag now, but it will hopefully get its feet under itself soon and start growing. The colors are so bright. We put it near the front, so you can see this one from the kitchen and the table. 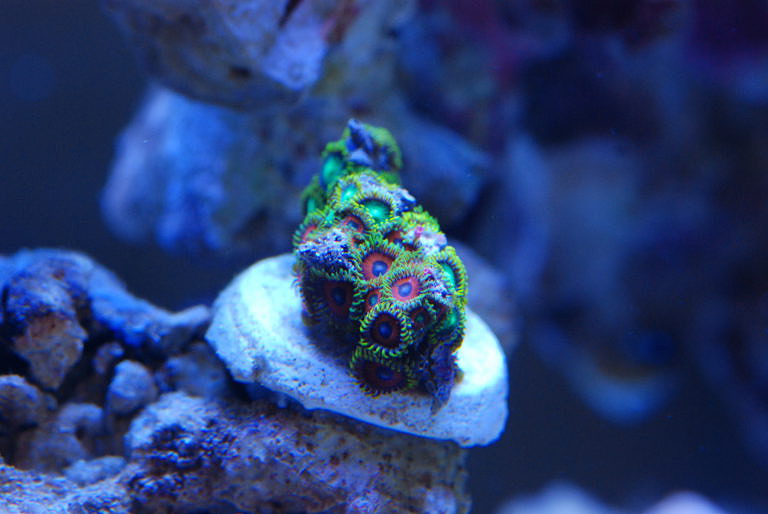 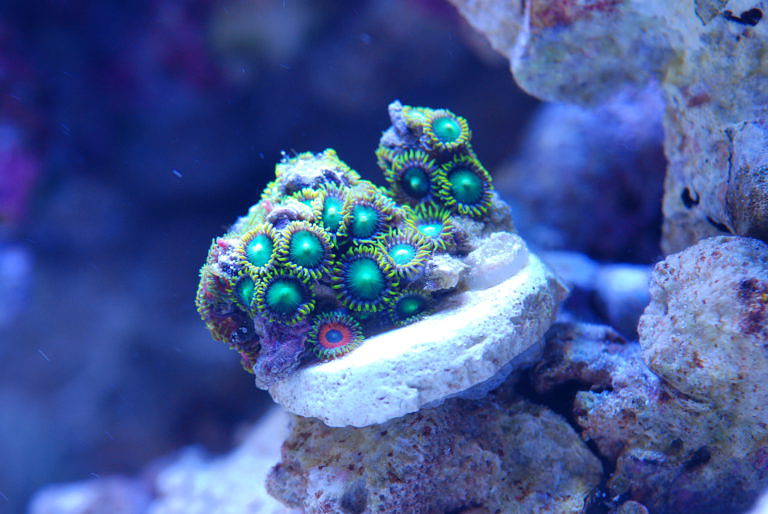 And then on the side by the futon, we have these subtle pink zoos. They were only $10, but I think they are so pretty. 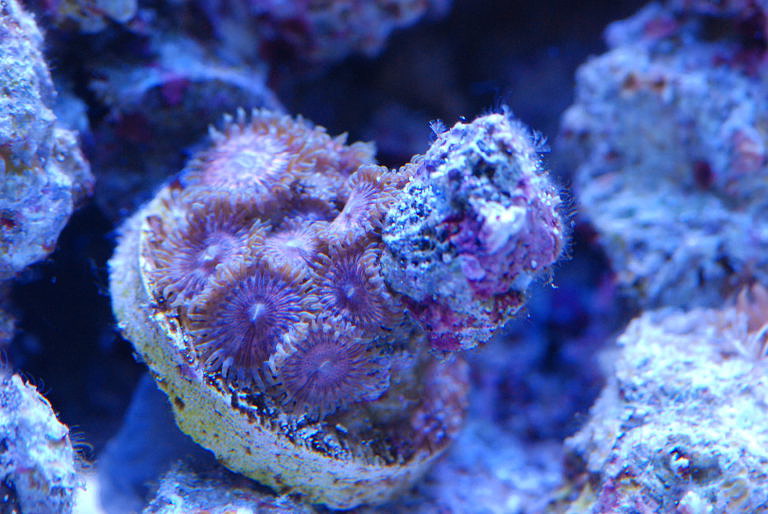 The tank is starting to really purple up nicely, especially in the paths of the blowers. 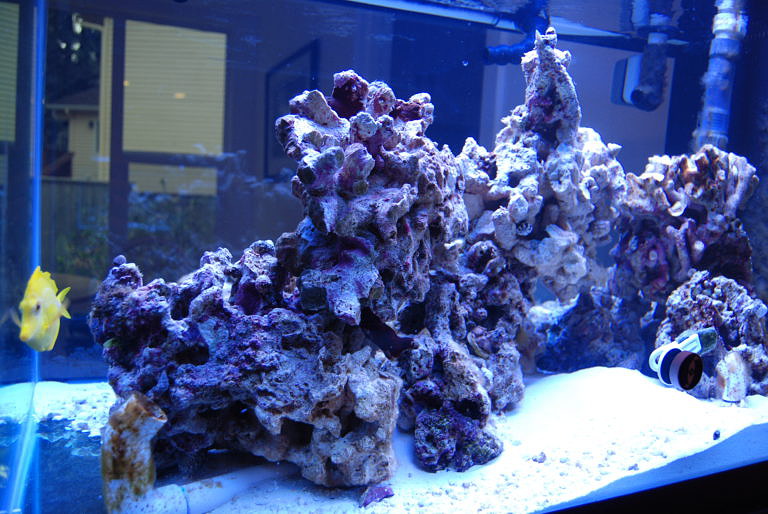 We’re planning to swap out one of our purple lights for a white, which should help some of the color shift you can see here. (After you look at the tank for a few minutes, everything has vivid yellow cast to it when you look away.)

Our little tank watcher has been very busy keeping an eye on the snails and hermit crabs. Here he is, checking up on them after dinner. 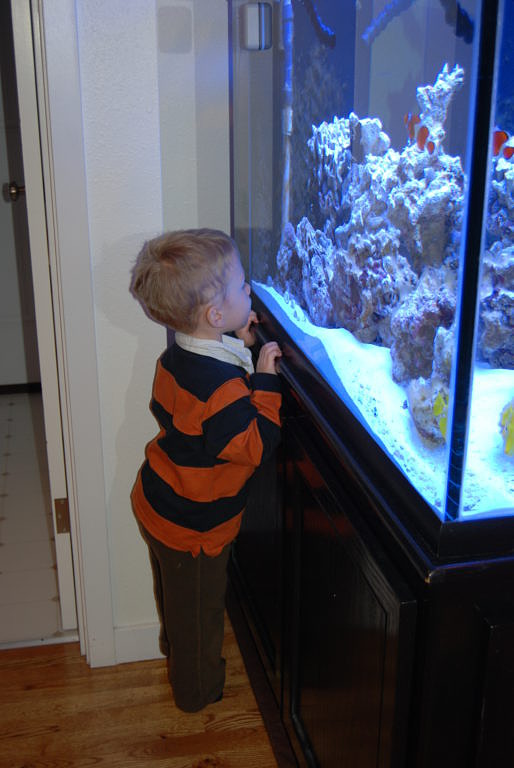