At five weeks post partum, with Kevin’s 8-week paternity leave more than half over, we felt up for an adventure and decided to try an overnight – our first family vacation! The goals were somewhere pretty, not too far away, not too long of stretches in the car, with somewhere we could walk around and see sights or shops and get a latte and some food. Ferry rides prefered. We debated briefly between the Olympic Peninsula, Victoria, and the San Juans. Victoria got nixed due to the international issue – I don’t think infants need a passport, but crossing the border still seemed like added complexity. Then I found Port Townsend which seemed made-to-order, and a B&B that was so well reviewed, only had two rooms (neither of which was booked yet), and claimed to welcome children. So off we went!!

We were aiming to leave at noonish, but due to a very late night were pleased to be out the door and on our way by 3 pm. In the vacation splurge mentality , we stopped at Starbucks for some coffee to begin the trip – here’s a parking lot view of my knitting (a baby pumpkin hat)! Advantage of the carseat: hands free time for me! 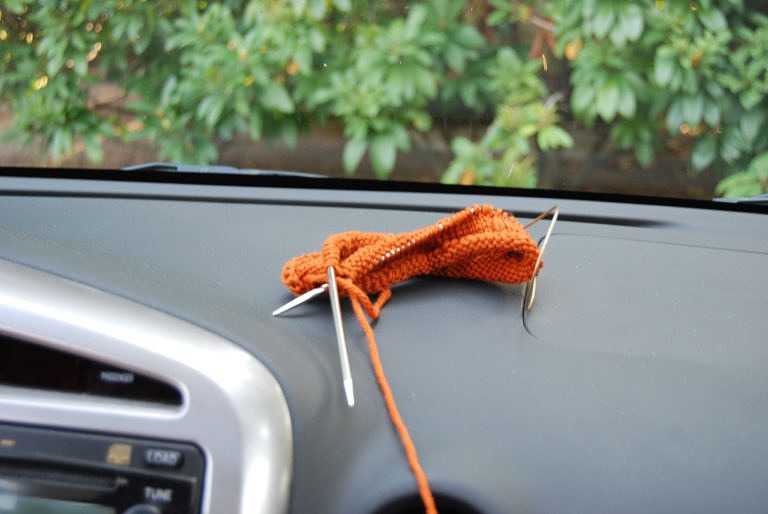 We caught the ferry at Edmonds, and I nursed in the car while we waited for the next boat. The ride across was so warm and beautiful, with the Olympics peeping through the afternoon haze and an amazing Rainier view behind Seattle’s skyline. I was proud of getting the Moby wrap on without drooping it across any Ferry surfaces. H snoozed happily while we went up to the top deck to enjoy the crossing. 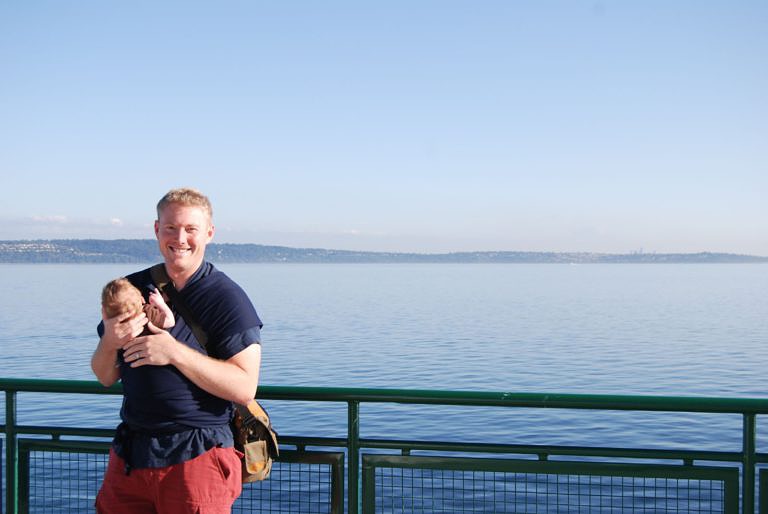 The drive was a lot of fun – long enough to feel like we were seeing the sights, but short enough to be sane with a baby in the back and semi-sleep deprived parents in the front. We were particularly delighted to see a herd of (captive) buffalo – I was desperate to see some on our cross-country drive out to Seattle in 2004, and since then the dearth of buffalo has become a standard roadtrip joke. We also enjoyed more of the pioneer location names on the atlas, especially Point No Point and Useless Bay.

The B&B was so much more perfect than I was anticipating. I knew that it was a Victorian full of antiques, but wasn’t expecting all of the renovations – the owner said that the previous owners had brought in shipwrights to do all of the cabinetry and detailing. Very Not-So-Big-House, and we had the top floor all to ourselves which worked beautifully. A lovely view of the water and the little Whidbey Island ferries from high up on the hill – such a picturesque nursing spot. 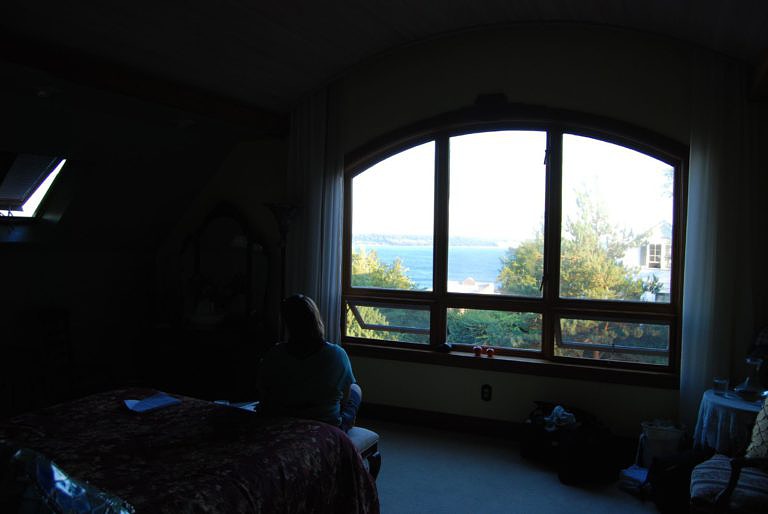 We went out to dinner for the first time with Henry after admiring the Olympics at sunset from the wharf. Our initial choice was a seafood place on the water but after peeking in the door we didn’t even bother going in – too quiet and full of older couples. We next tried the Public House across the street and were delighted with it. White table cloths and candles, but they also had a cup of crayons on the table. Lots of local beers on tap, but the table next to us had a toddler crumbling his dinner onto the floor (his dad got down on hands and knees to clean it all up at the end of the meal). Perfect for this new stage of life. I wore Henry in the Moby wrap and he was perfect – slept all through dinner (we even stayed for dessert and coffee!) and the walk home, and then woke up to eat again as soon as we were back. He slept as well as he ever does through the night, then Kevin moby-wrapped him for breakfast. (Go us, only a few minutes late for the 9 am serving time!) 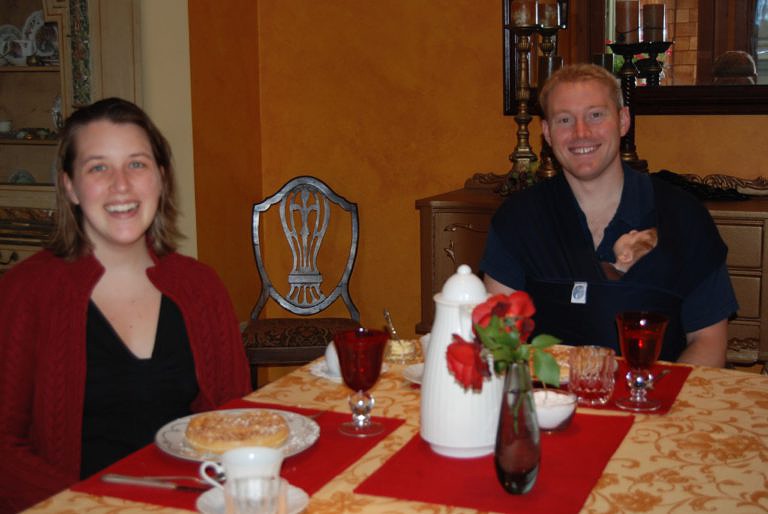 We explored the town (including its two yarn shops!) then had lunch at one of the cafes. Henry woke up shortly after we arrived, and I was so proud to actually discretely breastfeed in public – a major obstacle to have conquered. 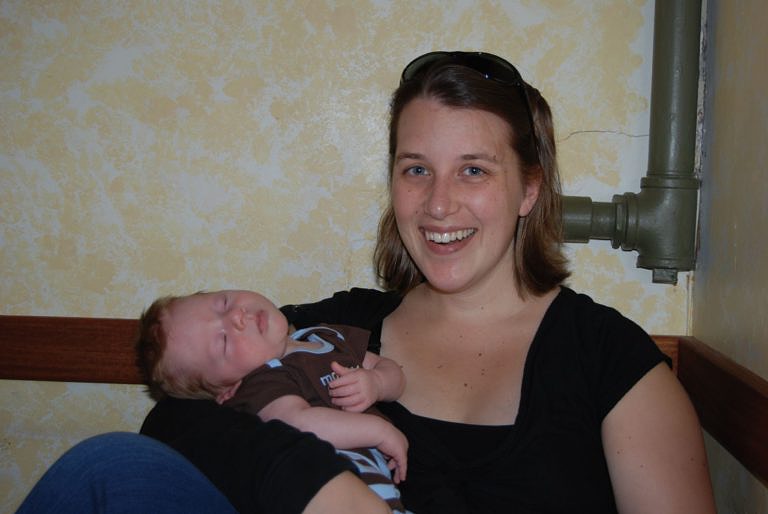 The sandwiches were great and we enjoyed our coffee before taking dessert on the road. Before we left the area, we drove up to the Fort Worden State Park and walked a bit around the beaches at the northern tip. Pretty views of the fog over the water, tankers and tugboats, dunes, red-roofed lighthouse, and the Whidbey Island cliffs. 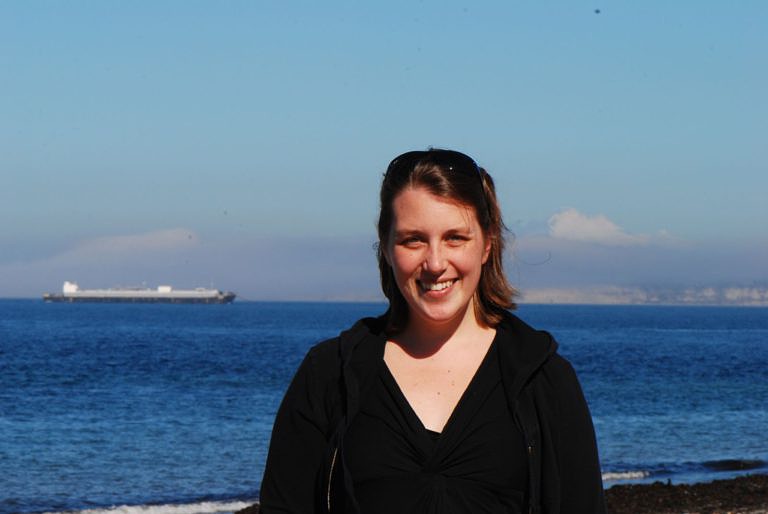 The wind was cold but the beach was lovely. I didn’t envy all of the kayakers gathering for their convention, though – while the skies were sunny, I bet that water was freezing. 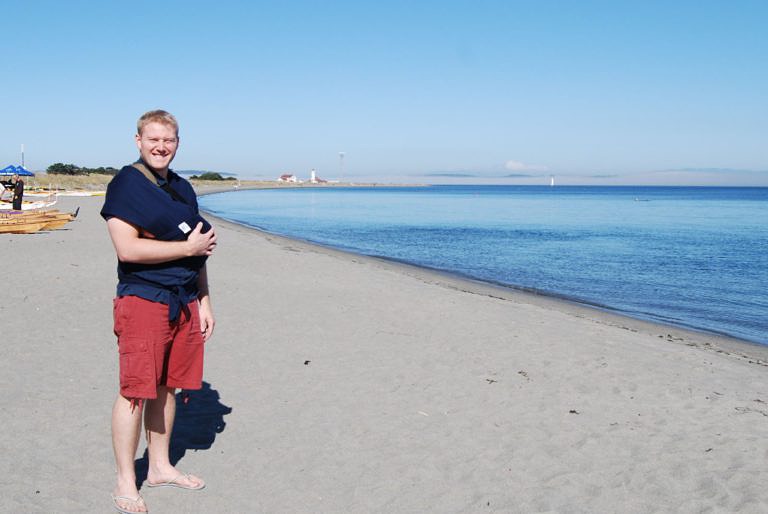 Such a wonderful overnight trip. 🙂

First evening social outing – off to meet my knitting group. H dressed for the occasion, in one of my fabric decorated onesies: 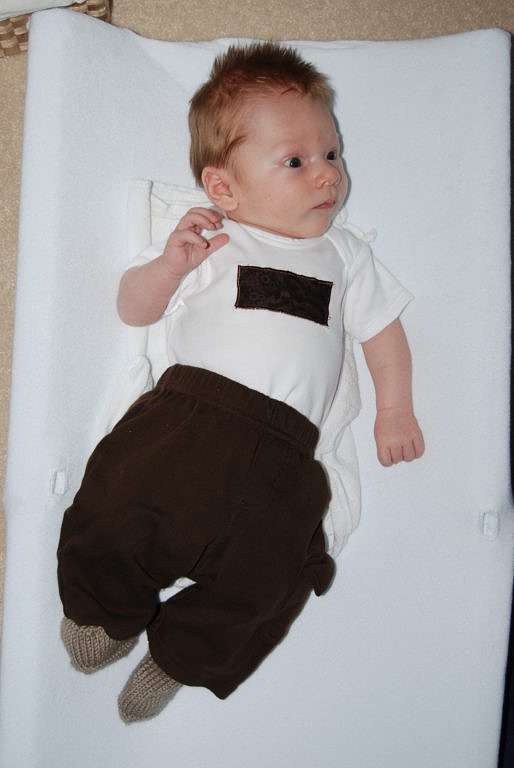 Plus booties and the matching sweater: 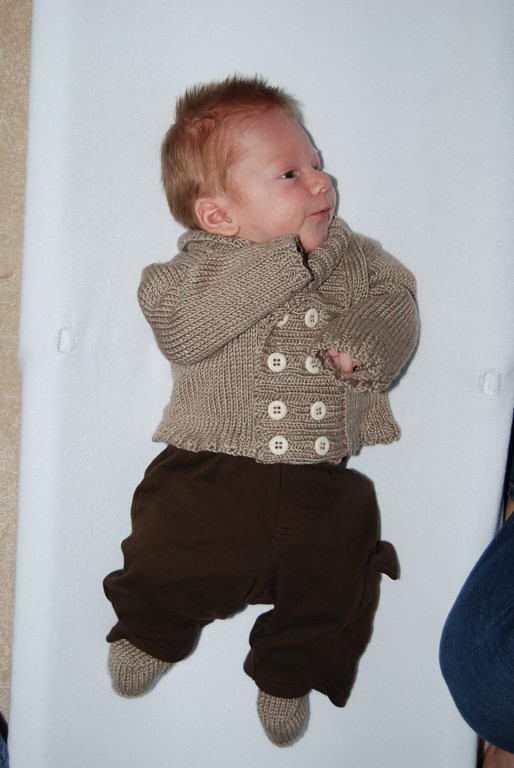 The yarn (a bamboo blend) feels wonderful and cuddly on him. The shoulders and sleeves are still a touch big, but it was pretty close to a good fit. The back was as adorable as the front – something about babies heads looks even cuter from the back. 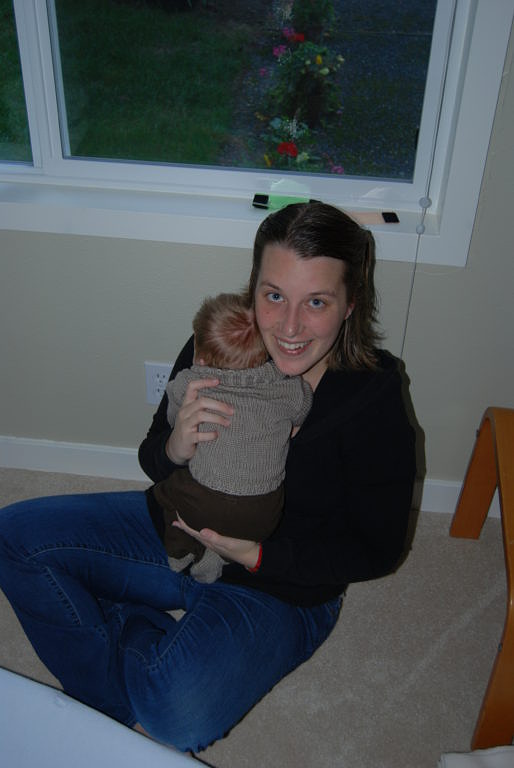 If I had to knit the sweater again, I’d add an inch or two to the length – he has such a long body relative to his girth. Similarly, the booties could use another ¾” before the heel since he has the longest little feet.

He was a fussy little thing all afternoon, so here’s Kevin attempting to mollify him outside before we headed out. 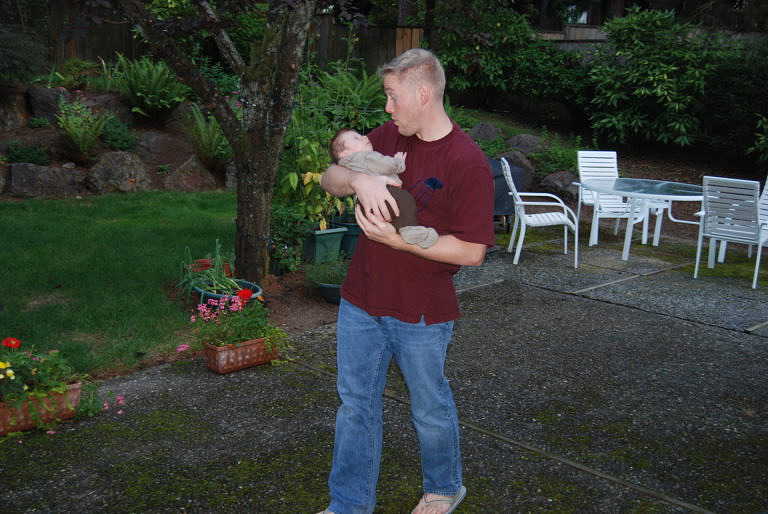 Another project that I intended to complete pre-baby, and then haven’t been able to find the time for: a breastfeeding cover. But today turned out to be the day, and even with the baby feeding breaks and my slow pace these days, this was a quick project. I found a pattern, set up the machine and ironing board, and cut the pieces between one set of feedings, and then pressed the pieces and seamed them up between the next set. Even ignoring the breaks I didn’t clock in at the stated 35 minutes, but it was definitely under an hour and the cost was around $5 (compared to $35 for the commercial version). A success! 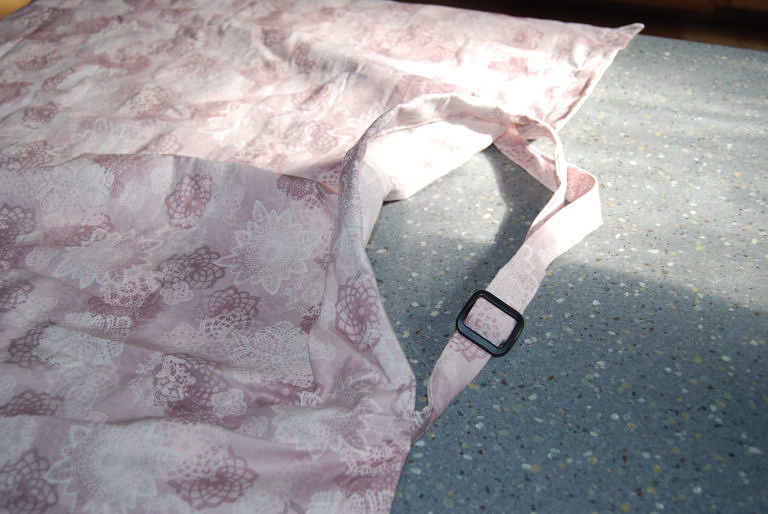 I’m finally starting to feel ready to reengage with the world, after about five weeks of preferring to stay put at home with minimal obligations. But the breastfeeding outside our home piece has been so daunting to me – quite the advanced maneuver and all sorts of logistics – yet he needs to eat and it would be nice to be able to do that wherever, discretely and with a minimum of hoopla. I’m very hopeful that the cover will be the perfect thing and make the difference between heading out freely and feeling obligated to stay at or close to home. Fingers crossed!

I’ve been meaning to make a mobile for the baby, but I didn’t rush to finish before he was born (a case of completely misestimating the amount of two-handed crafting time that I’d have available). While Kevin’s parents were here for a week, I took advantage of all of the free bursts of time to make some progress on the project.

My vision was brightly colored wood and fabric dragonflies. I’d managed one coat of paint while pregnant, and in the last few days I’ve added a second coat, decorated them with polka dots, added a gloss coat, cut wings, and glued the wings to the bodies. 🙂 Here’s an action shot of the painting during the football games last weekend: 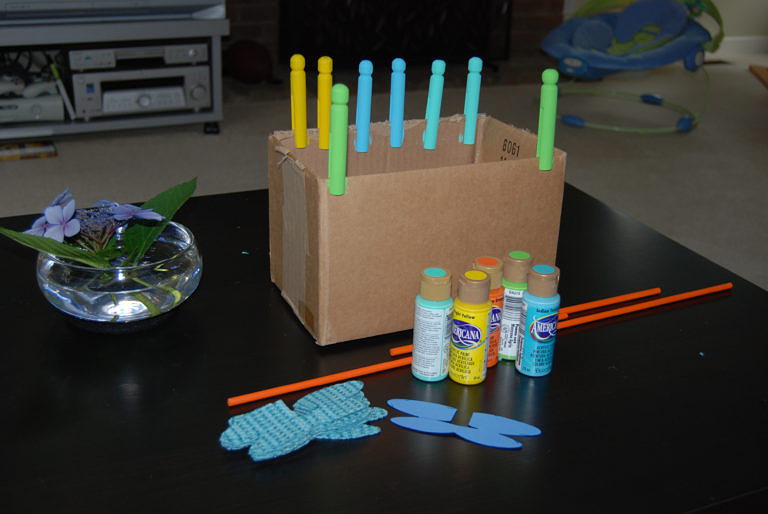 The wings make me happy. I’d been stalled on them, thinking that I’d sew them out of cotton and reinforce them somehow (posterboard inserts?) but that was seeming fiddly and like a lot of work. Then I remembered a set of placemats that we’d bought – they were supposed to be machine washable but then they shrunk badly. I was so disappointed and even though they’re no longer usable, I’d kept them. But now they’re quite thick and structured, plus still pretty – perfect for dragonfly wings. 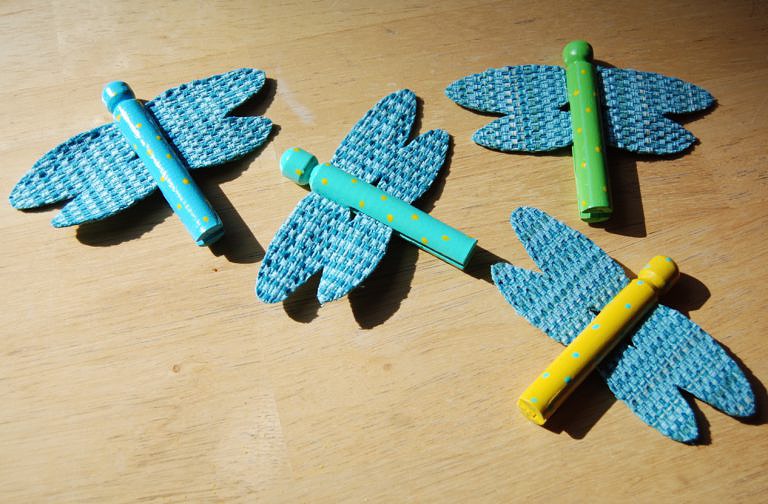 I’m still needing some brightly colored yarn to hang them with, and then I’ll be done!

In bits and pieces over the last three weeks, I managed to knit enough stitches to finish off my last pre-baby knitting project: a hat to go with the hydrangea sweater. 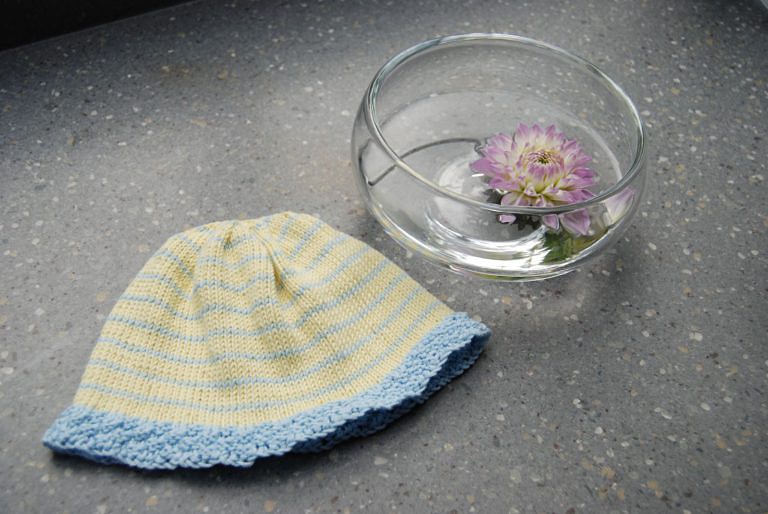 Despite its 15″ circumference, it looks enormous on him, so we’ll see if it ever actually fits. But I was so pleased to have it off the needles, and to be able to cast on for something else with slightly bigger yarn that this with its 7.5 st/inch.

Then, this morning, he fell asleep on my lap after nursing and I was able to cast on and get through eleven whole rows of a new project before he woke up hungry again! It doesn’t sound like very much, but it was such an exciting combination of cuddling time and “me” time. Kevin documented the setup: rocking chair, nursing pillow, baby, Kindle (I just subscribed to the NY Times!), coffee, pattern book balanced on my legs, and knitting. 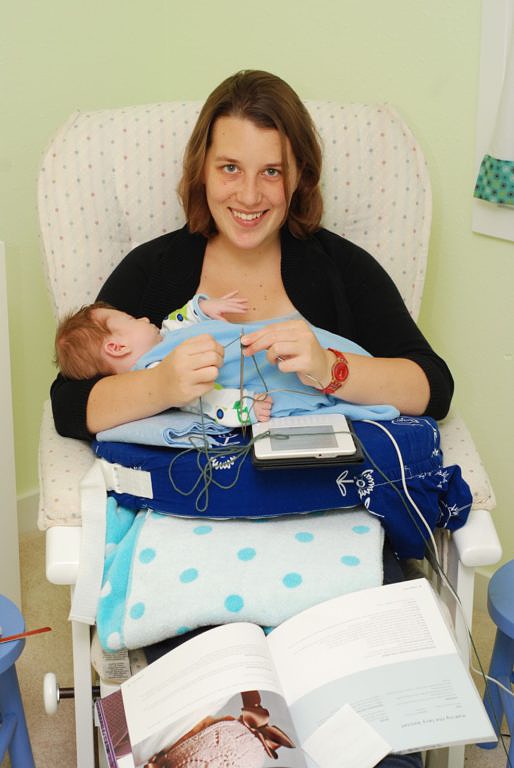 Yay, even if it will take eons to finish any projects at this rate. 🙂

I’d been hoping to make it to the Redmond Saturday Market for the first time since July. It closes at 3:00 and I didn’t manage to leave the house until 2:37, but apparently when you get there in the final minutes all of the flowers go on sale! So, at 2 bouquets for $10, I was so happy to bring home this: 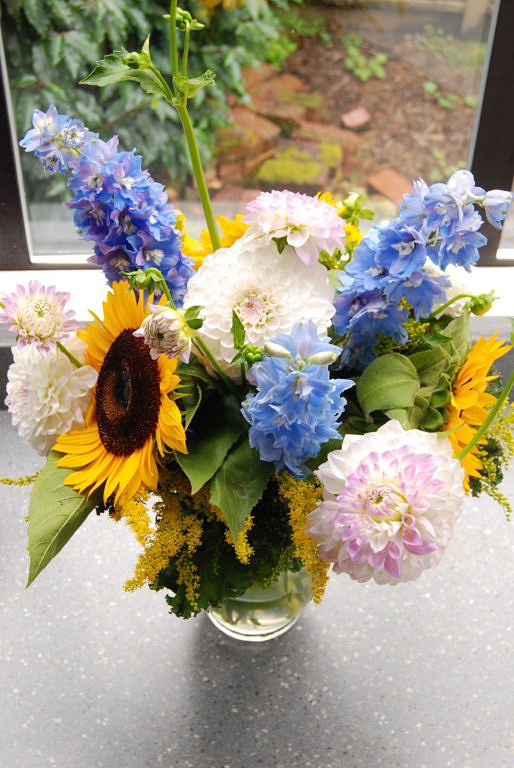 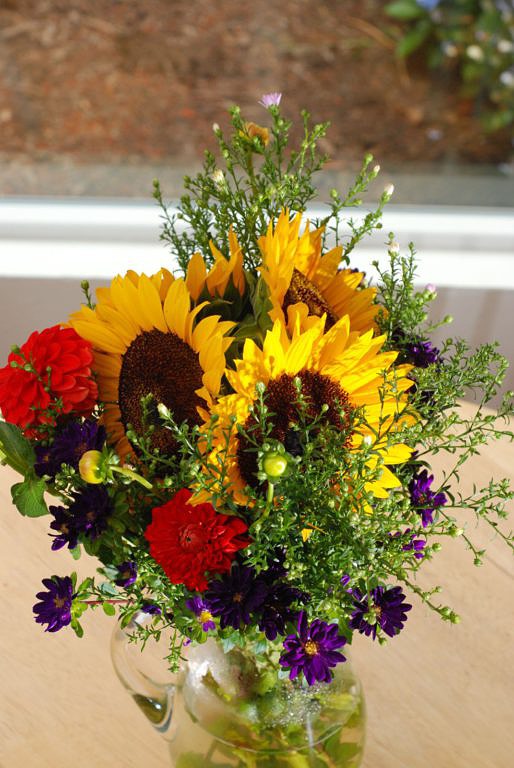 Quite the successful field trip.