Last spring, I bought two skeins of South West Trading Company’s Phoenix, colorway Parrot. I’d been admiring it for a year, and I found it 50% off and just couldn’t resist. It was one of those purchases where you argue desperately with yourself. One side of me thought that the yarn felt amazing (soft and sproingy – it’s “100% soysilk”, whatever that means), it was 50% off, and the colors are buoyant and cheerful. The grinch side of me didn’t have a pattern, doesn’t like variegated yard, and suspected the colors were in poor taste.

So I let it sit in my stash for a year and was rendered utterly cheerful every time I saw it, let alone touched it. 🙂

After a bit of pondering, I decided to try it with the multidirectional scarf. I’ve tried this pattern a few times with generally disappointing results, but it turns out this yarn is PERFECT for it. The stockinette highlights the colors nicely and feels wonderful. I started with #8 needles, per the ball band, but ended up ripping back and switching to #10s, which really is so much better. It’s my first time knitting with ribbon yarn, and I love it. I knit until the diagonal had 46 stitches, so the base is 7″ across, relaxed. Perfect.

The only issue is that I still suspect the colors are in poor taste. 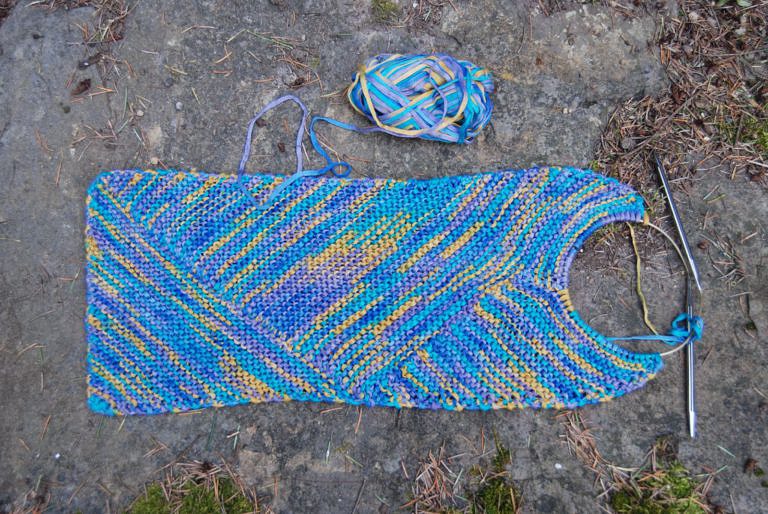 They’re just so bright! Kevin loves them, Amanda (who visited from CA on Tuesday!) understood my hesitation… the jury is still out. But in the meantime, I’m knitting away and enjoying/ignoring the brightness.