Kevin had his first beer (I believe I can get this story right) when he was in Amsterdam for Model UN in high school. He had a Westmalle trippel (a Belgian trappist ale), got blitzed, then had to ride by bike back to his host family’s house. He’s been trying to repeat the experience since.

It turns out that there’s a distributor near us, so yesterday afternoon we headed over to Bottleworks in Wallingford (I think?) and picked up some Trappist ales (two bottles of each) for a tasting: 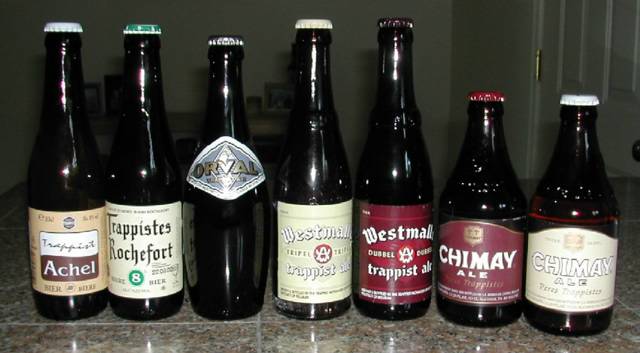 I’m a beer person in general, but these really belong to a whole separate category. Mmm! We split a bottle of each kind while watching the Two Towers, though after the Westmalles it seemed like any more would be wasted on us, so the two Chimays will have to wait for another day.

Here’s the best that we could capture it, given the limitations of my camera timer and the fact that i’d put on my high heels for the occasion and almost didn’t get back to the couch in time: 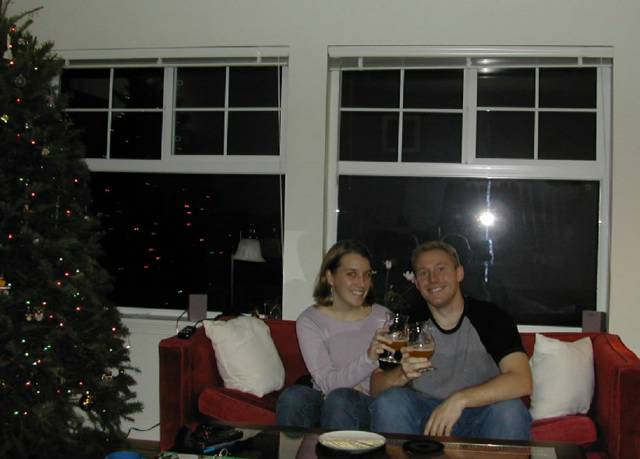 I booked my tickets home for Christmas back in October after being scalped for my Thanksgiving tickets. Nonstop flight to Boston on American for $450, not too bad. Unfortunately, I booked it back when I thought I might have to return for work, so I made it a short trip (Wed-Mon, including flying time). I wasn’t ready at all for yesterday to be my last night home. In a fit of optimism, after staying up late talking with my mom, we checked the flight status to find that my 9am flight had been canceled due to snow!! The earliest that they’ll be able to fly me out is Wednesday, and I got a seat on an afternoon flight through Dallas. Kevin is supposed to land in Seattle an hour later, so the timing couldn’t be better. And I get a few more days home with my family and Comet, the best dog in the world: 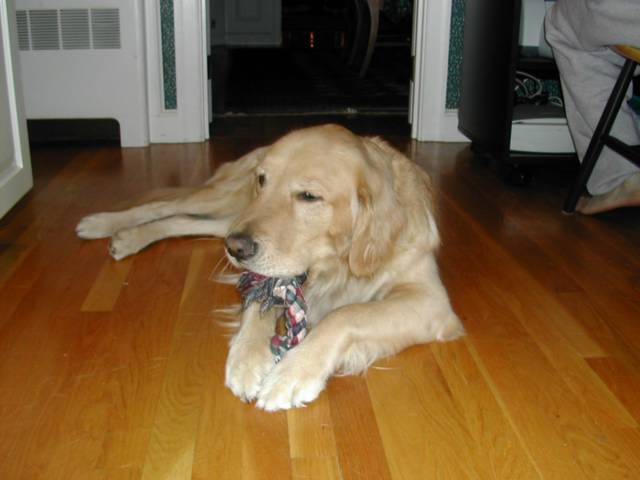 I know there are a lot of people who’ve been inconvenienced and living in airports, but at least after all of the airline meltdowns this past week, there’s one person who’s happy!

Dave’s hat fits!! And the plane rip-out was the last one, so it was finished and under the tree by Christmas morning. (I don’t know how people manage all of these Christmas knitting deadlines. One project strains my skills.) 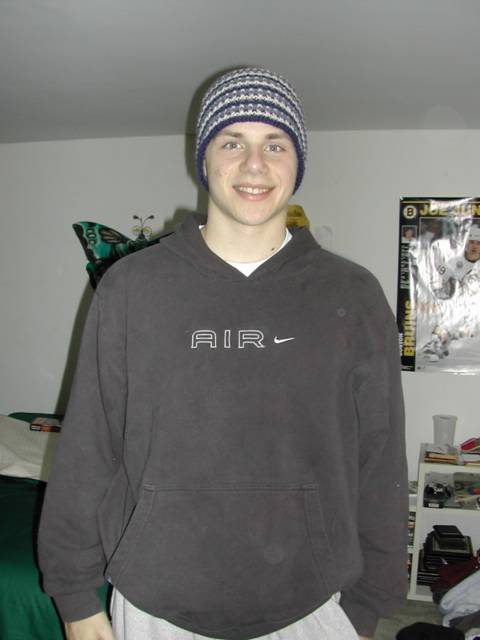 And from the back: 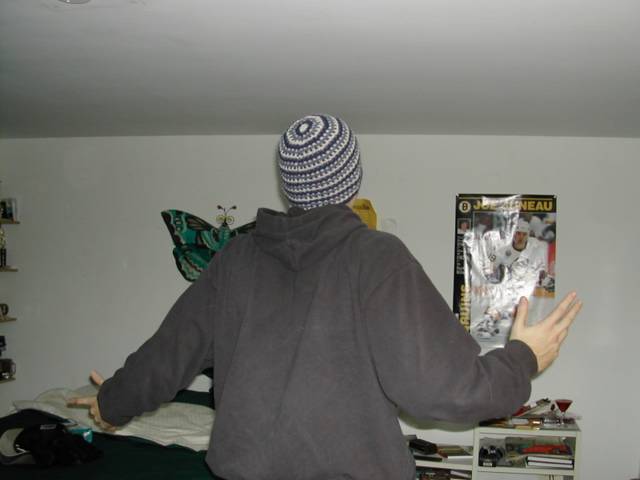 Thanks again to Laura for the great pattern and for hosting the knit-along!

My sister Sharon brought her Sophie and flower home from school, so I finally got to snap a picture. 🙂 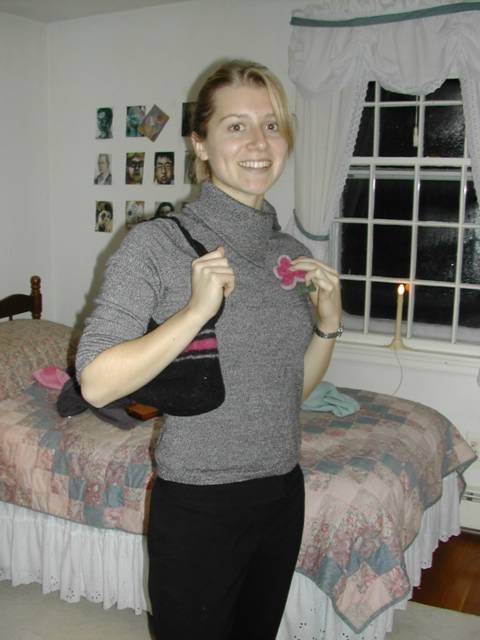 Again: Happy Birthday, Shar! and I can’t wait til your visit!

On my (nonstop! yay!) flight home to Boston yesterday, I had more of a lovely time with Hayden. Turns out that the ripping spree I went on last night was completely unnecessary. I made it through about 90% of the decreases, and then somewhere over middle america realized that those three inches were really quite needed, and then some. Bum-mer. Why can I never knit hats correctly the first time through??

I magic-looped for the first time, and after a few unsuccessful attempts got the hang of it. I think that dpns are easier, especially w/ multiple colors of yarn going (I kept getting tangled), but somehow I don’t have any #8 dpns, so the two circulars did the trick!

Well, really early January, in the “retroactive post, now that the gift’s been given” category:

I’ve been working on the Hayden Hat in the blue, light blue and beige Encore that I bought a few weeks ago. I love the pattern, but the decreases have been tricky for me. Dave’s hat was coming along a little too well… I knit an extra three inches, and then had to rip back. Here’s a picture half way through the ripping spree: 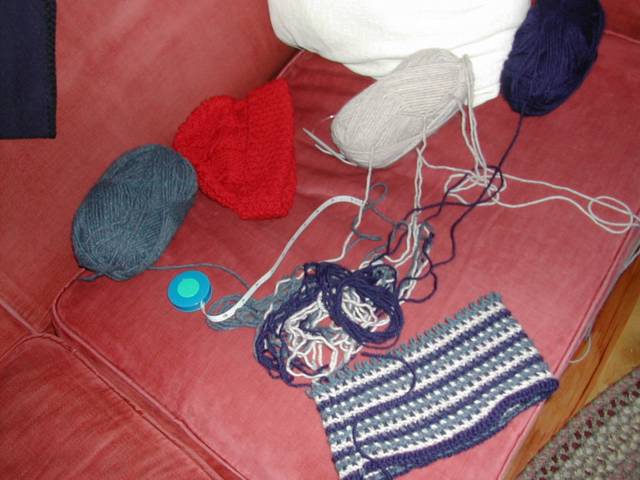 and another once a few rows had been added to the carnage: 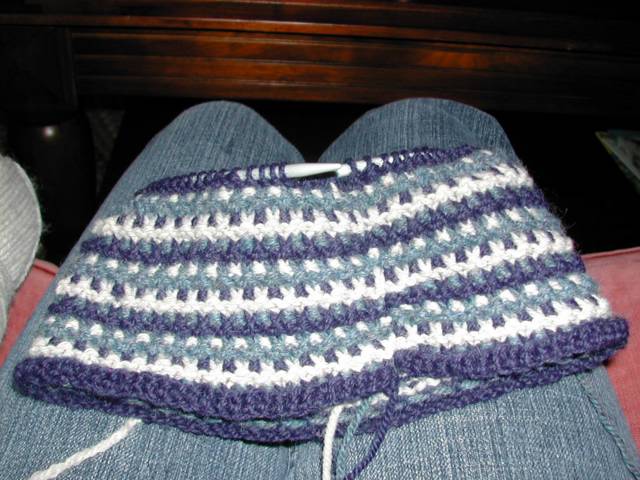 On the plus side, at least I’m ripping so that I can start decreases, so it won’t take as long the second time around…

Last year in Boston, buying ornaments for my first tree, I quickly seemed to develop a theme:

It wasn’t that I was extremely enamoured with snowmen, they were just the most widely available option. A few weeks into advent, I began to notice the alarming trend, yet was helpless to stem the flow of snowmen onto my tree. I looked far and wide (and I really do mean everywhere) for variety, particularily along more religious lines — we do celebrate this holiday for a reason. However, I had almost no luck.

Then, this year Kevin’s mom sent out all of his old ornaments. Along with the obligatory snowmen, we have a whole new genre inhabiting this year’s tree:

Firefighters. 🙂 I suppose though if I had to choose a theme to guard our tree (who will be unwatered for over a week, poor thing), firefighters aren’t half bad. We’ll have to leave variety for 2005.

… and so we finally bought a tree. Apparently in Washington, they only sell Douglas Firs and Noble Firs, which both look a little odd for a girl used to Balsams. After a fair amount of calling around and u-eys (how would *you* spell that?) on busy roads looking for something under $50, we finally ended up at home depot where we found a reasonably nice douglas fir for $20. I’m worried that it’s going to lose all its needles, but it does look and smell so Christmas-y in the living room, so I’m going to stop stressing and just enjoy it. My mom packed my share of our family’s ornaments as well as a good bit of tinsel (I couldn’t find any last year — maybe it’s a boston thing?), so it was fun to see them all come out of their wrappings and find a spot on the tree. 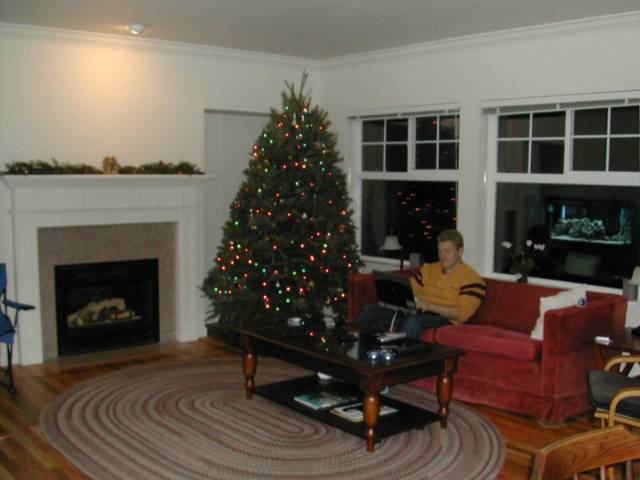 I like that the tree lights and the fish tank are both reflected in the window. 🙂

We finally have a fish!! Want to see him? 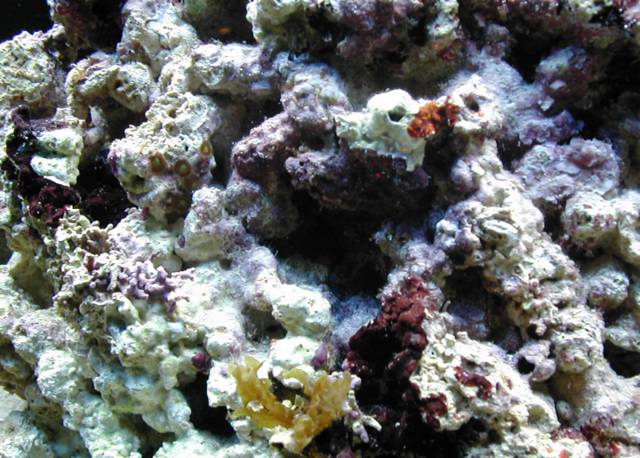 Yeah. We can’t see him either. He’s a royal gramma, which sounded like a great fish to start with until we got him home, he disappeared into our live rock, and we googled for a bit more information. It turns out that these fish live in caves that they either find or make in the rocks in your tank. They venture forth occasionally, but mostly just stay in their lair. Our guy booked for the rock as soon as we let him into the tank. The entrance is in the back, and therefore invisible to us, but we can see through a tiny hole in the rock to part of his cave (The dark patch in the center of the photo above has about a 1/3″ hole in the back and we can sometimes see part of his fin.) So, basically we’re doing more rock watching.

Speaking of the rock, though, you can see some of our coralline algae (the maroon, purple, and pink on the rocks) — this is supposedly highly desirable and shows that we have good calcium carbonate levels in our tank. The plant at the bottom is about 2 inches in circumference. We had a worm munching on it, but he’s finally stopped. To the upper left of the fish lair cave, you can see five of our unidentified purple tube polyps: they have brown fringed exteriors and bright green interiors and are about 3 mm across. They look like short stumpy purple tubes when they’re closed. I’d love to know what they are. Finally, doesn’t the white rock w/ the splash of red just above the fish lair look like a skull with a bloody mouth? It gives me the creeps.

Really, you say. Enough gushing about the rocks! Show me a fish! Well, our guy is getting a little braver, so I got a photo: 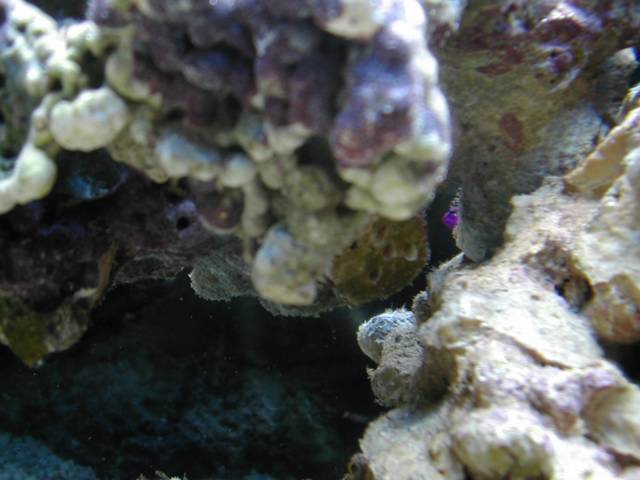 Isn’t that great? You can see a millimeter of his purple head if you squint through that little opening there. So far he’s out of his lair, but sticks right by the entrance to it on the back side of the tank.

Since Kevin and I probably have more patience with this game than you do, here’s the best shot I have: 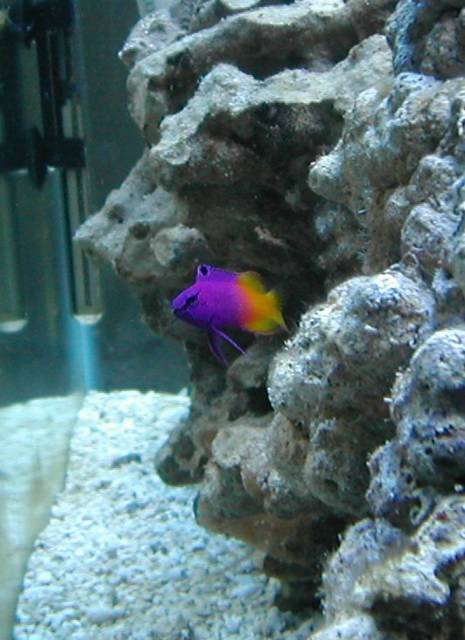 In person, he’s a lot more magenta than royal purple towards his head. I think that the flash and the tank lights are responsible for the odd color. I had to crawl around the side of the tank to get this shot, but isn’t he pretty?!

It’s measuring in at 4 and a quarter inches. Pretty cool. 🙂 Here’s a blurry photo: 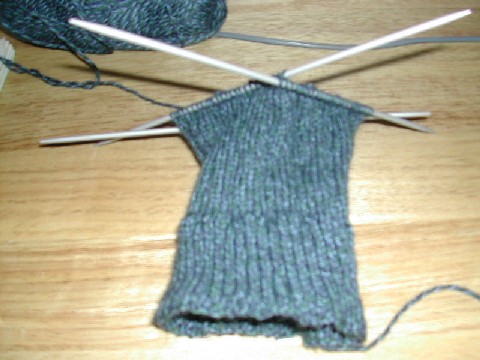