Claire, after running laps in the cul-de-sac: “I can feel my heart beep!”

One of those words that Henry learned by reading instead of hearing: he says it as “invent-ory” (like “owlery, or smithery”, not inventory.) And he thinks of it as where the inventions are kept. I love that to bits, Kevin started to correct him and I frantically waved him off. I love the idea of a little boy with an entire wing of inventions. (Even if they ARE all planes.)

Talking about snow at dinner, and how we hope it snows this year, when Claire chimed in:
“Do you remember when we knocked over the snowman and found the grass?!”

Kevin and I were astounded, the kids didn’t see snow in person at all last year, so I think she’s talking about the early-December 2014 snowstorm when she was just two!! So amazing that at four she still remembers it (and that it’s the first time she’s mentioned it!!)

Claire, recently, loves adding units to numbers to emphasize how impressive they are.

Claire, in her scientific observation voice, riding in the backseat: “Our voice doesn’t evaporate in here.”

In the last week the house has suddenly gotten very festive, and it’s almost entirely thanks to the kids. I set it off. First, on a rare night where no one went to sleep (very rare since the beginning of Sept, they’re both still tuckered out by the school schedule, Henry even went so far last weekend as to explain how great naps are, he didn’t used to like them but now he does…), and in a quest to use up some of the kitchen craft stash, I taped up a few leaves next to the microwave. 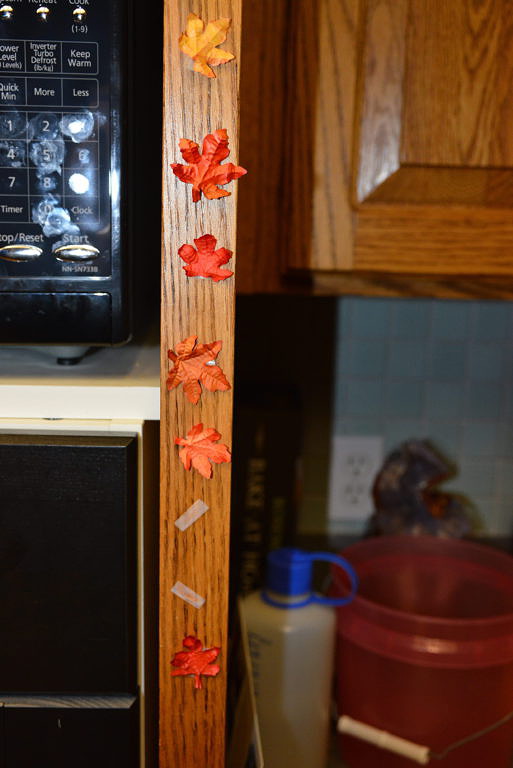 They’re sort of performance art – they fall constantly, and we have to reattach them.

Claire took one and put it on my dinner table décor, so then I added many, many more – so pretty! 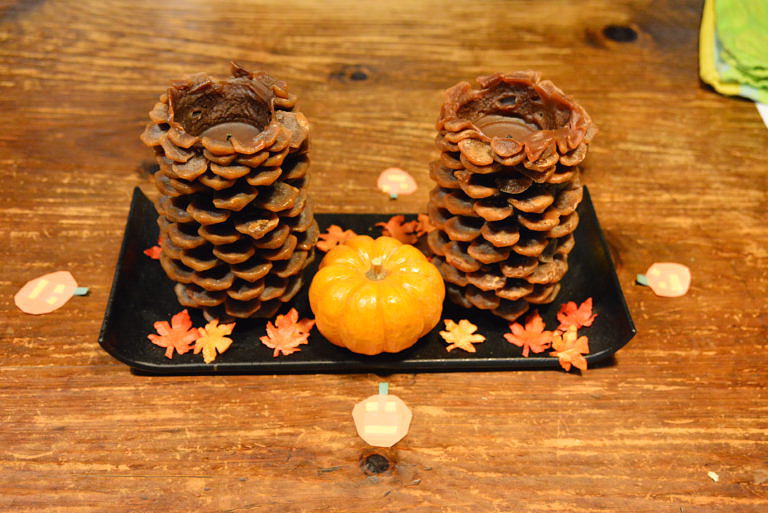 Well, by the time I’d woken up the next morning, Henry had added a candy, pumpkin or candy corn tied with a string to all the important doors in the house. He also added a jack-o-lantern for each of us to gaze upon. 🙂 I was delighted. And then he kept going… a Happy Halloween sign with a jackolantern at each end for the book shelf: 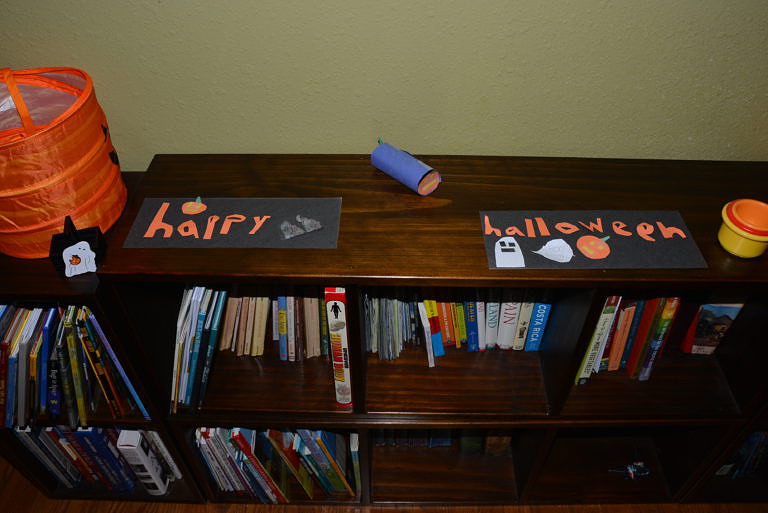 A ghost + pumpkins for the fish room shelf. 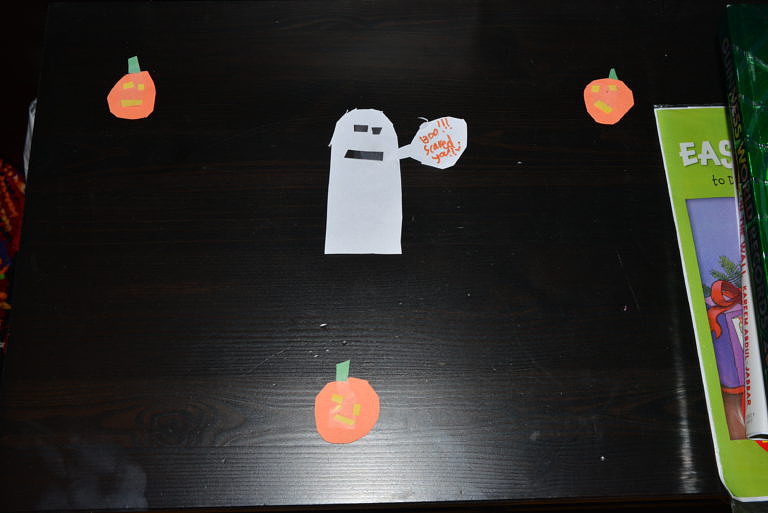 A fireplace-sitting pumpkin to keep Claire’s pumpkin from her very first pre-K field trip company (the field trip to the farm was a HUGE deal. She brought a lunch in a lunch box! And rode a bus! With a seat belt, not a car seat! And the farm had a pig (so immense, and so totally not what she thought pigs were like. She’s still talking about it. And after much worrying about whether they’d run out of pumpkins, they didn’t! and Claire chose one she thought was perfect. Now it’s living in a place of honor on our fish-room fireplace. And now she would like to go on her next field trip tomorrow.) 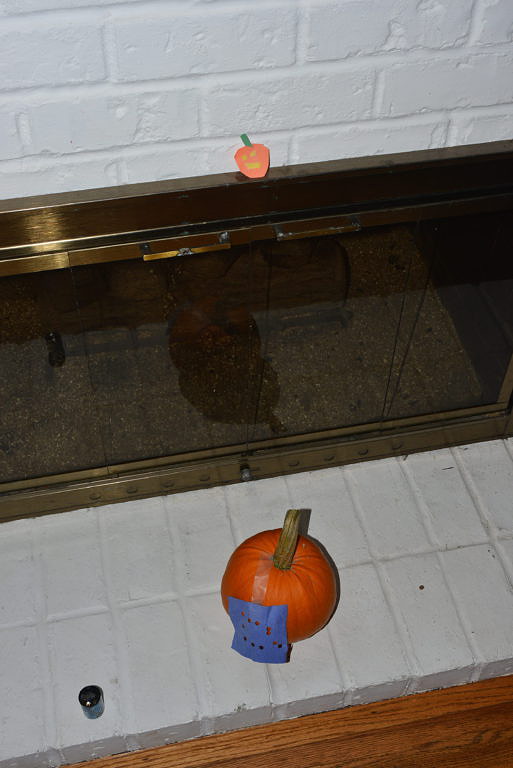 Claire is no slouch, she absconded with the hole punch, made impressive art, and taped it to her already-awesome pumpkin. 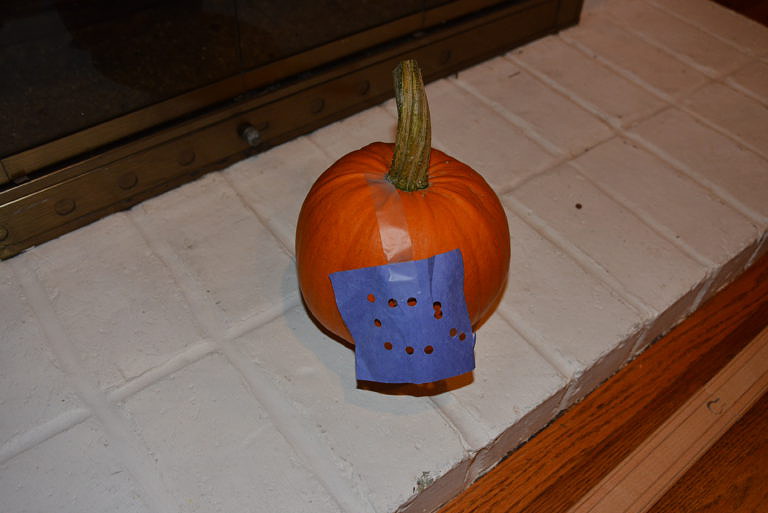 Then Henry made a large ghost family and taped it to the end of the counter. (We’d talked about not taping things to paint, and this was astute of him – a large display surface, but these cabinets are not on my protected list.) 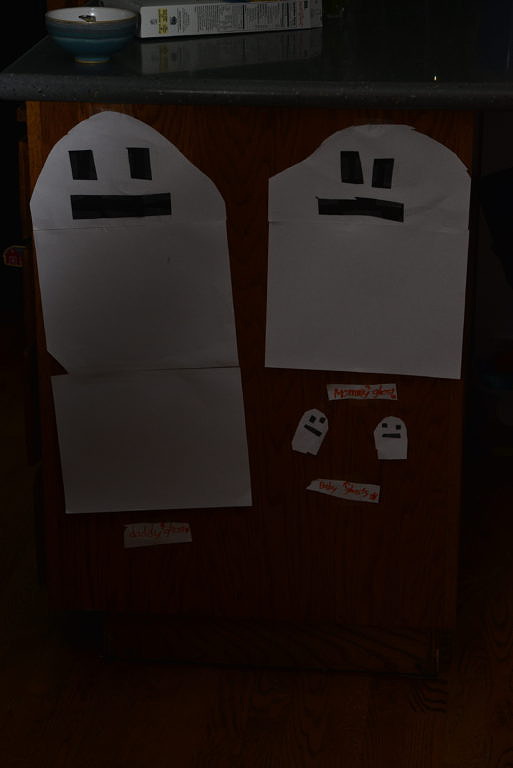 And then he outdid himself after reading all the Halloween picture books when I finally got them down: a creepy tree with a spider web, plus bats. He looked up the phase of the moon that day on his moon calendar. (I love the accuracy.) If he’d asked, I probably would have been cranky and told him not to affix sparkly star stickers to my horrible 1980s oak cabinets but he didn’t ask and I love stickers. Happy October!! 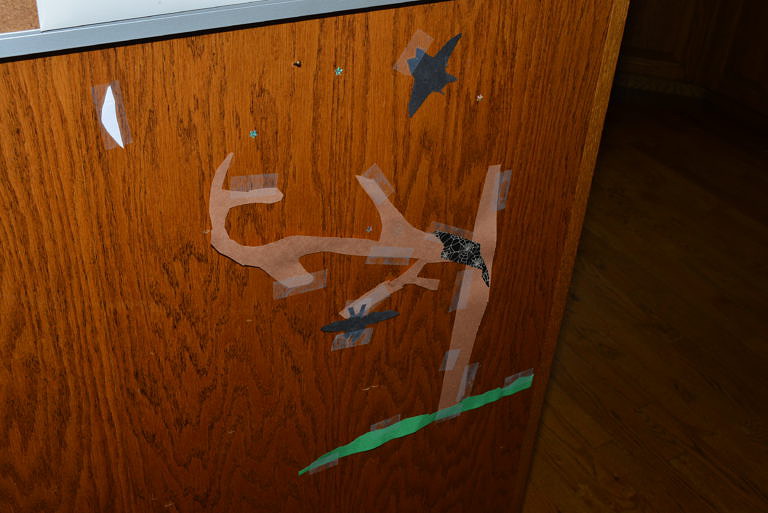 Henry has officially run out of orange construction paper and is down to his last sheet of black. 🙂 I am so enthusiastic about getting more, I love that the house is getting more and more Halloweenish. Kids are awesome.