Finally finished the last of the machine quilting, ready to start queueing up the audiobooks for the binding and all the tucking-in of ends (which will not be a small project). 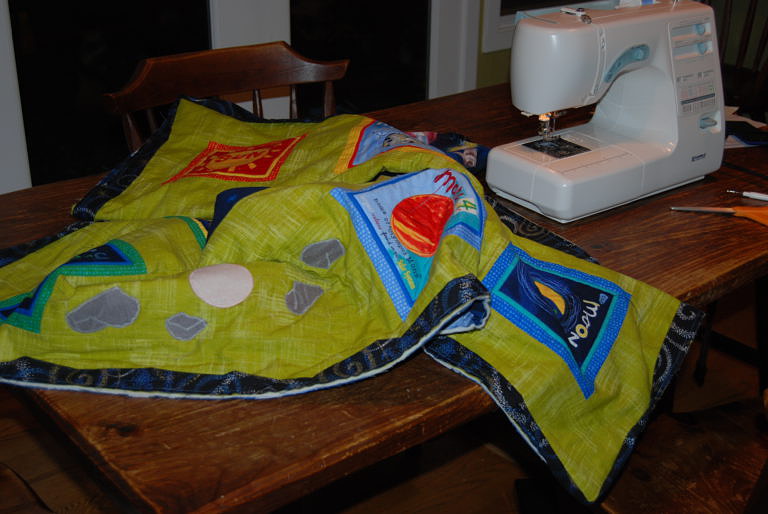 My list right now is Bossy Pants, The Rosie Project, and Rocket Boys. I wonder if that will be enough? Binding by hand takes an eternity.

I finally finished hemming all of the binding on C_____’s baby quilt! 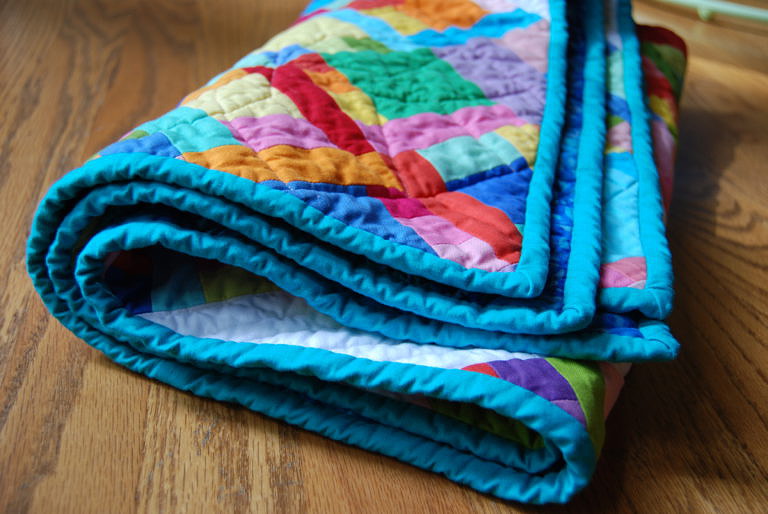 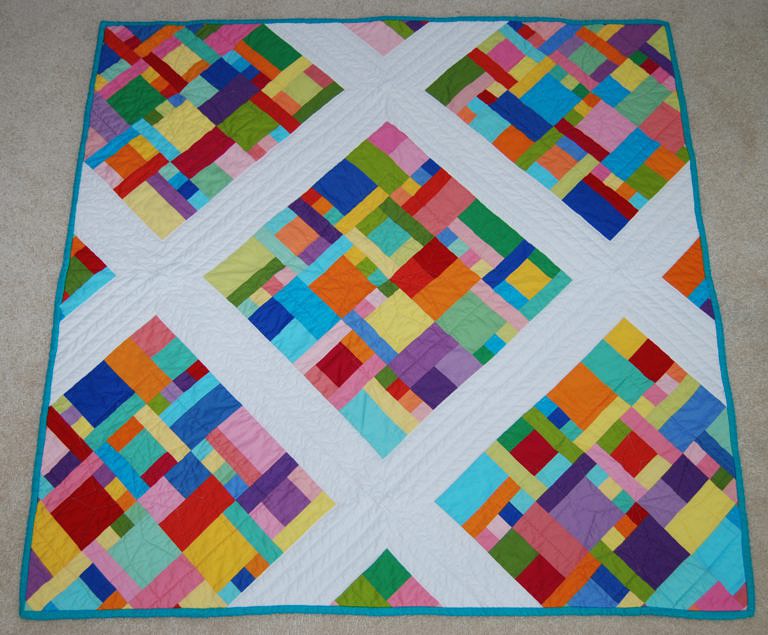 And the backing, with a little bit of sunlight to catch the quilting. 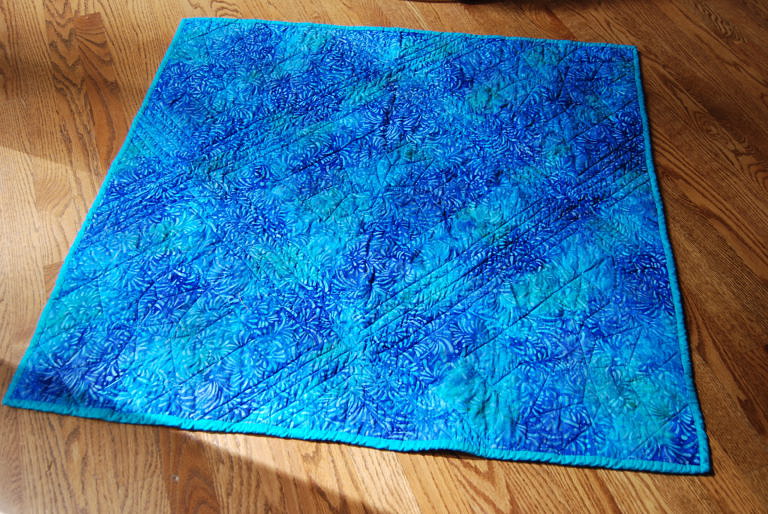 I knew I wanted to use the close together (3/4″) quilting on the white sashing, but I was stymied by the squares. I wanted something complimentary, geometric instead of random, and not a million ends to sew in. I started searching for stained glass windows, and found a pattern that I simplified to this. I like it but don’t love it – it competes with the random squares pattern and doesn’t really do it any favors. It will do, but it isn’t magical to me the way the quilted circles on H_____’s quilt were. 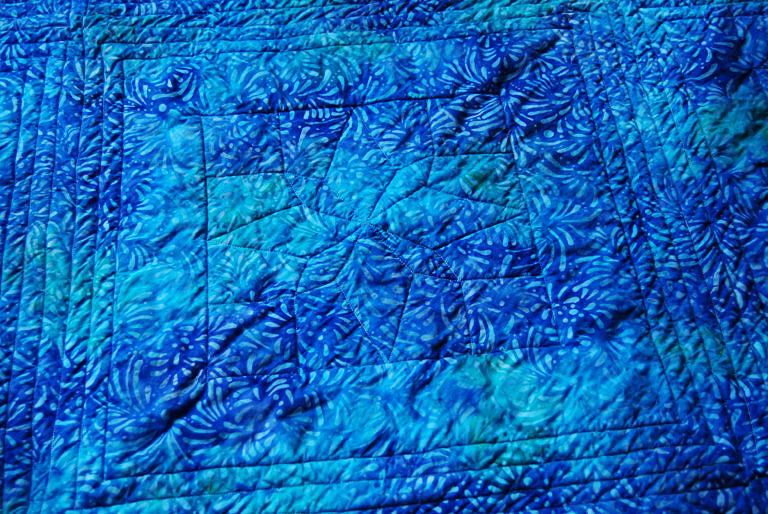 I love the colors. I really wanted to do something with solid fabrics, since I haven’t before and there are so many quilters online with great blogs and lots of solid-fabric quilts. I ordered a charm pack of Robert Kaufman’s Kona Cotton in Bright Colors, then four more after realizing that one square used a full pack after I’d removed most of the khakis and some of the aquas. It might not have been the very most efficient use of fabric, but it worked well for me for this project, and I love the color mix. 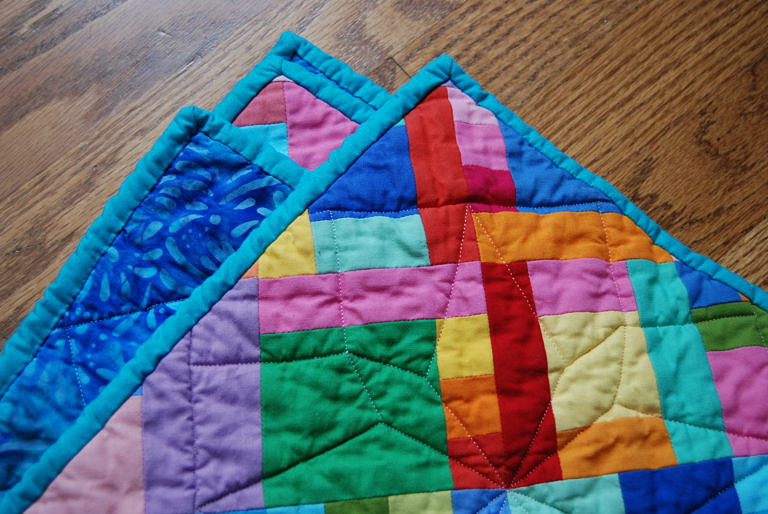 I improvised the pattern. First, I drew four different kinds of base squares.

Then I sewed these four base squares into a combination square. And then four combination squares, each with a different orientation, made a large square. There are five large squares in the quilt, turned on point, with white sashing between. I chopped off the edges of the outer squares to make the corners of the quilt, and reused four of the eight resulting triangles to fill in the middle of the edges. 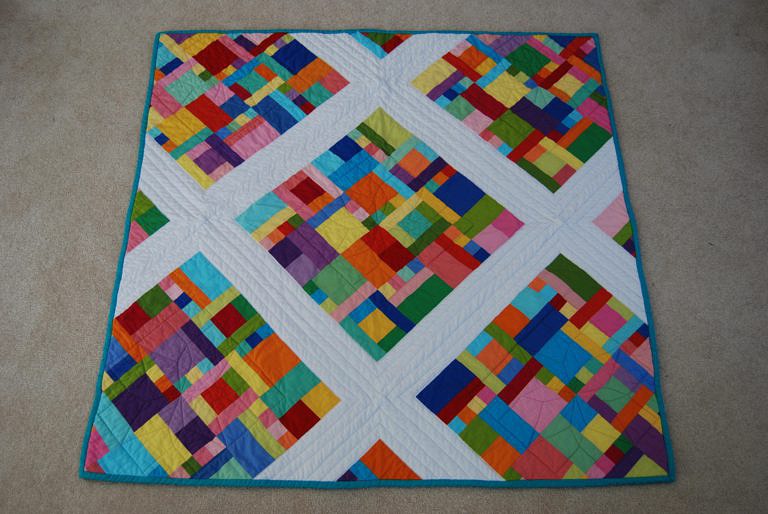 This was my math for how many of each size/shape of pieces I would need. 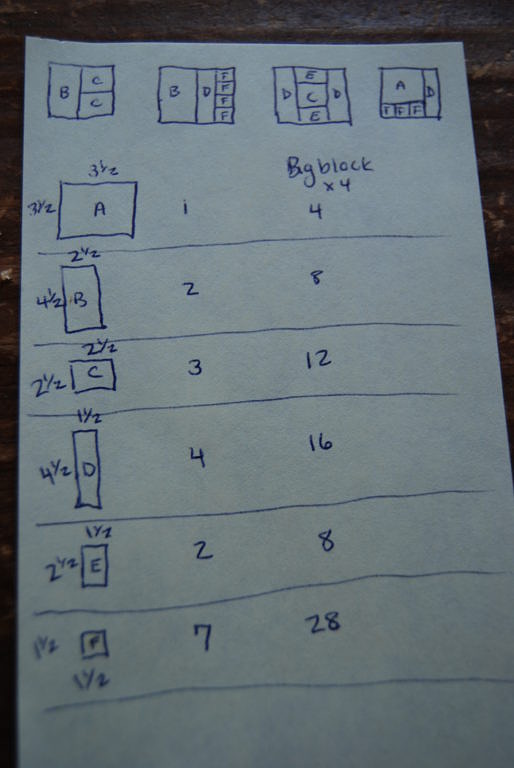 And this was my cutting guide to get the right pieces out of my charm squares. I washed the charm squares (there seem to be differing opinions about this, but I didn’t want my top to shrink in all different directions after it was all sewn together), divided them into color families so that the distribution of shapes would be roughly even across colors, and then cut into lovely neat piles. 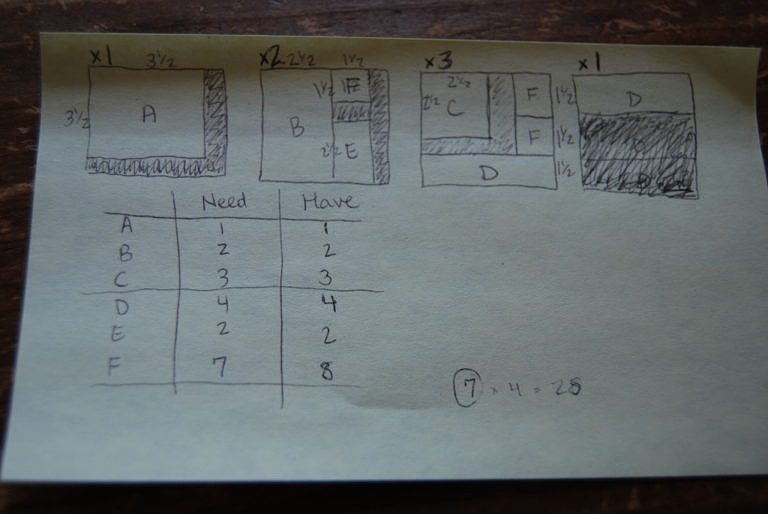 It’s very exciting to me that this is finally done and ready to be used. It’s been in the background getting a few inches of attention at a time for the last eight weeks, and now not only do we get to start using it, but it’s no longer on my backlog. It’s kind of nice that it won’t be taunting me from the corner of photos anymore, like it was in these. 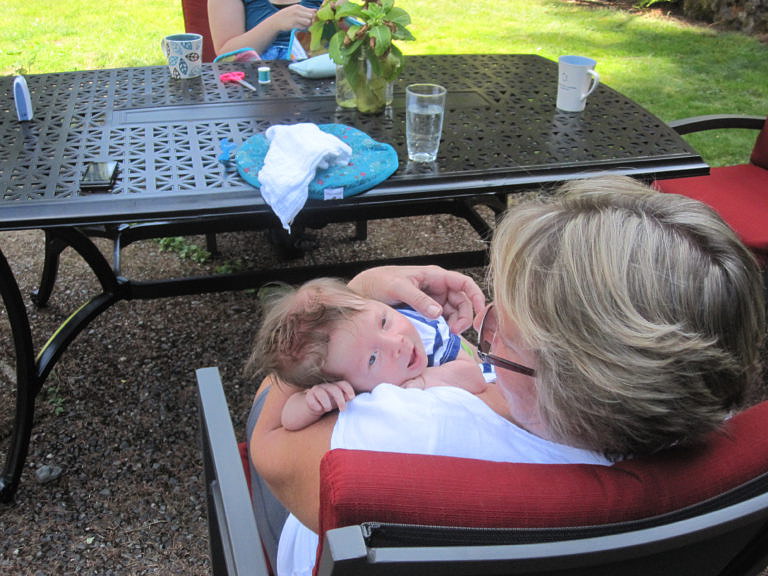 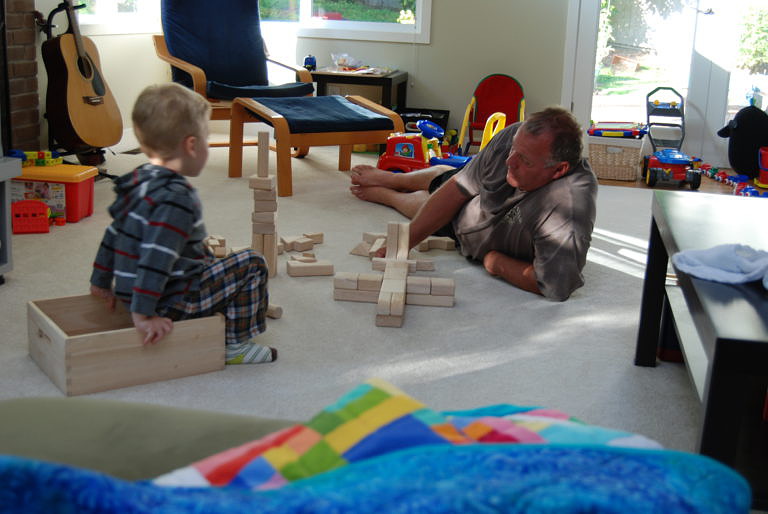 Perhaps it would have gone faster if I wasn’t always working on it while ALSO doing something else, like taking photos and holding a sleeping baby. 🙂 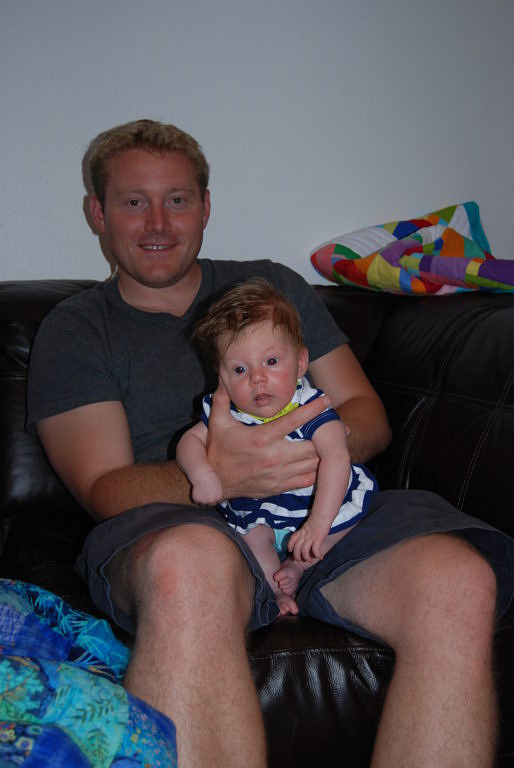 I hope she loves it to a ragged and threadbare end many years from now. 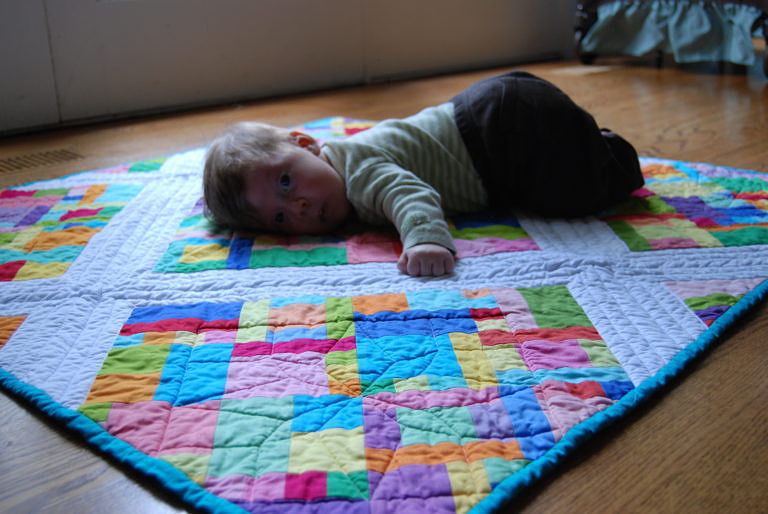 One last “so big” photo – the quilt is 37″ square, and she’ll be nine weeks old tomorrow. 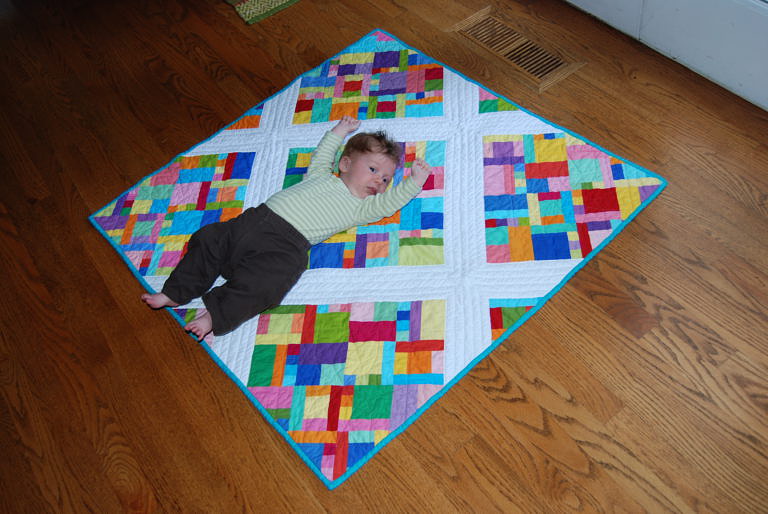