We finally had the guys come out to grind up the four stumps. Here’s a last photo of one of them from our bedroom window. 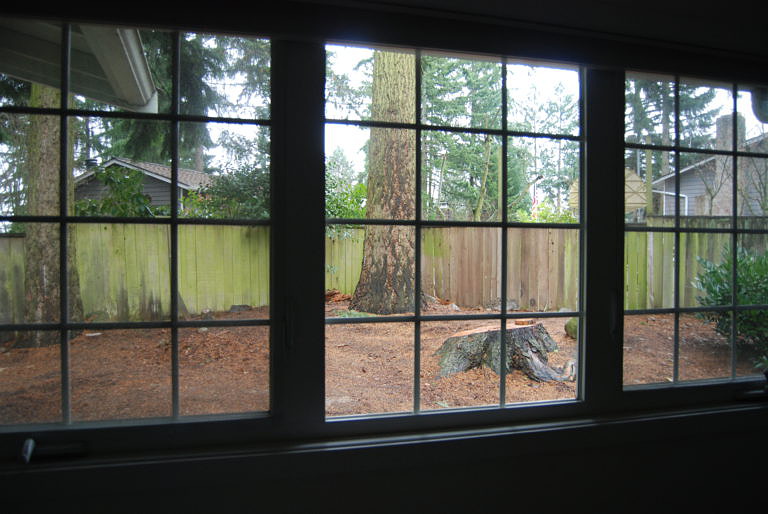 Now we just have big piles of sawdust. 🙂 The guys were great and also ground the tiny stump from the tree I cut down myself last fall.

We’re considering what to do with that side yard. It feels so much bigger without those trees, and it actually gets morning and afternoon sun now – probably the only place on our property where that’s the case. There’s no easy way to get water over there, but part of my brain has been chanting away about a real herb garden and a veggie garden…

We’d been waiting for weeks for our permit to go through, and then early last week it finally did. On Thursday and Friday we had four trees taken out – yay! Kevin’s Dad actually did the research and found the tree company for us. I loved that – between the scam artists and the specialized lingo, it was great to just be able to trust his recommendation.

Our town limits the number of trees you can remove per year, and generally they require that you replace each healthy removed tree with a new native species. At least the permits are free. (We’ve both heard horror stories of people fined thousands for removing trees without a permit, so the free route seemed optimal.)

When we moved in, our quarter-acre property had 17 trees. Three were fruit trees that we won’t remove (especially after Kevin’s dad did such an amazing job pruning them for us), and one was a little (5″ at 4′ off the ground) hemlock that I cut down myself with the handsaw. So that leaves 14 trees – we just removed four, and will probably do another 5-6 in the next 2 or so years. Major motivations are more light, saving the roof and gutters, and saving the cars (we park in the driveway, and are perpetually fighting pitch). Here’s a very rough map of our property, with the trees we removed crossed out in blue, and the ones slated for the future crossed out in red. 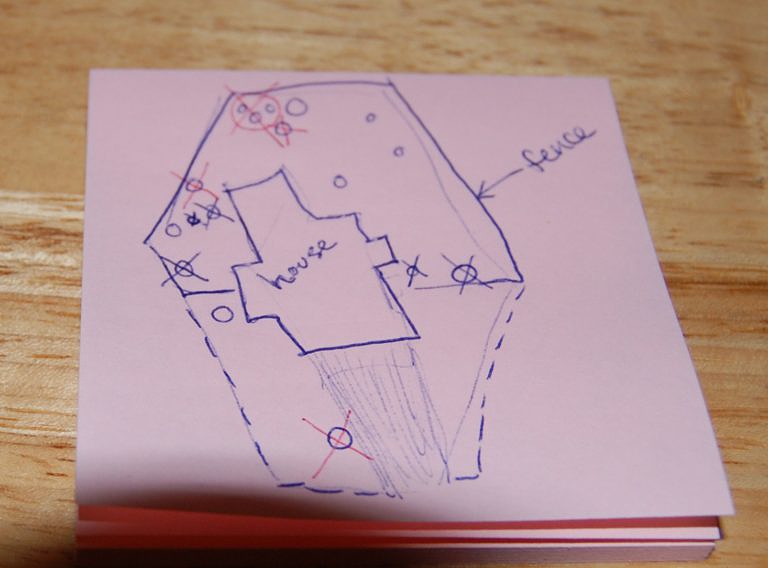 This time, we removed two 65′ hemlocks from the east side of the house. At four feet off the ground, they measured 20″ and 22″ in diameter. (Both qualified as dangerous, given how much they were leaning and how close to the house they were. One of them has been a woodpecker haven all summer, and when they cut it down the center was all rotten. Whew. Good timing, us!) On the west side, we took down a 65′ fir tree that was 26″ in diameter four feet off the ground, and was about seven feet from the house. Our neighbours also told us that the top snapped off in the last windstorm and fell on the cars in our house’s driveway and the neighbours’ – explains why it looks so huge and filled out for “merely” 65′ of height. We also had the remains of the sweetgum removed. (Kevin’s dad cut down about 2/3 of the tree over Christmas – we would have let him keep going except that it was big enough to require a permit.)

Watching them take the trees down was simultaneously fascinating and terrifying. The drop zone was very small. They de-limbed the trees first, and dropped all of the big branches down with ropes. 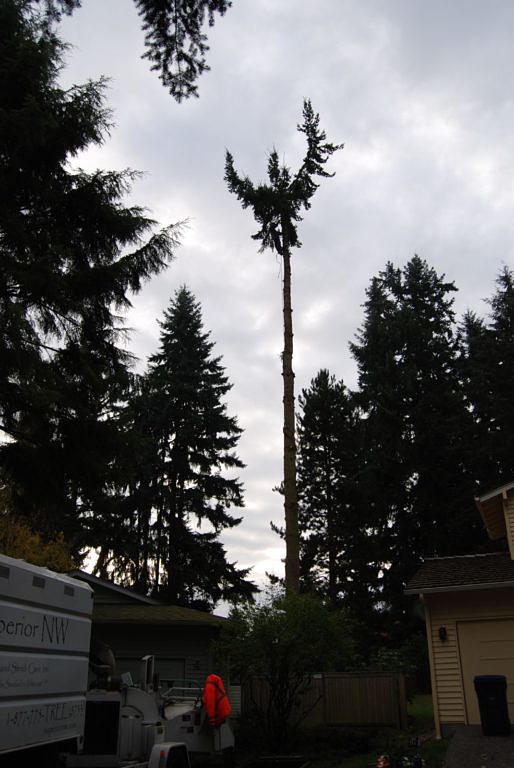 (See the guy up there?) All of the small brush got chopped – they carted away two huge truck worths of it (I was so glad not to be stuffing it in the yard waste bins!). Once they had just the trunk left, they cut 16″ sections off and let them fall to earth. The thuds were ground-shaking, and we have some impressive divots. The rounds (live wood that’s 16″ tall by 20″+ in diameter) is impressively heavy, and it was falling far enough that by the time it hit ground it was really flying.

Before on the east side of the house: 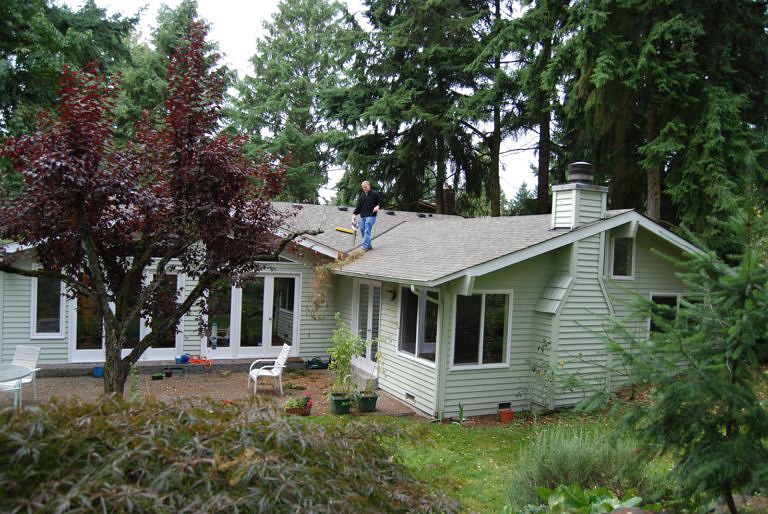 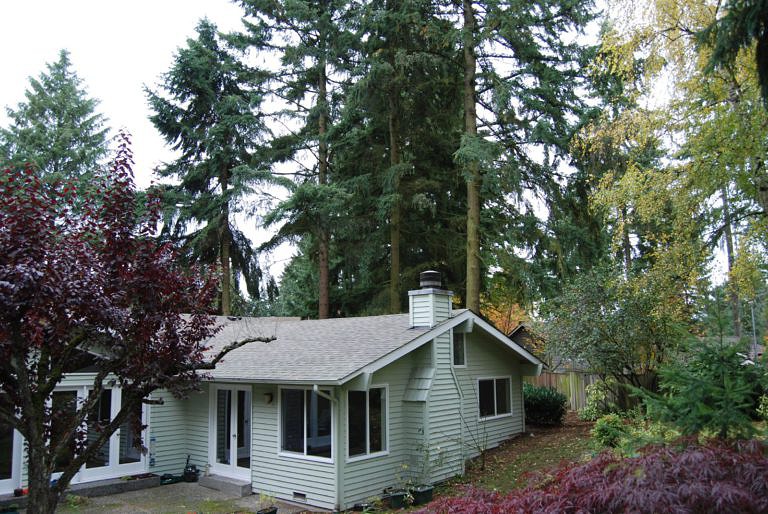 Before on the west side of the house: 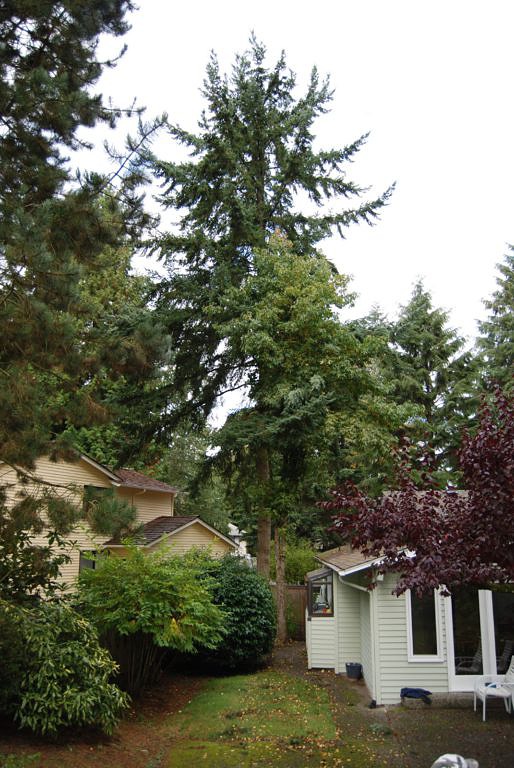 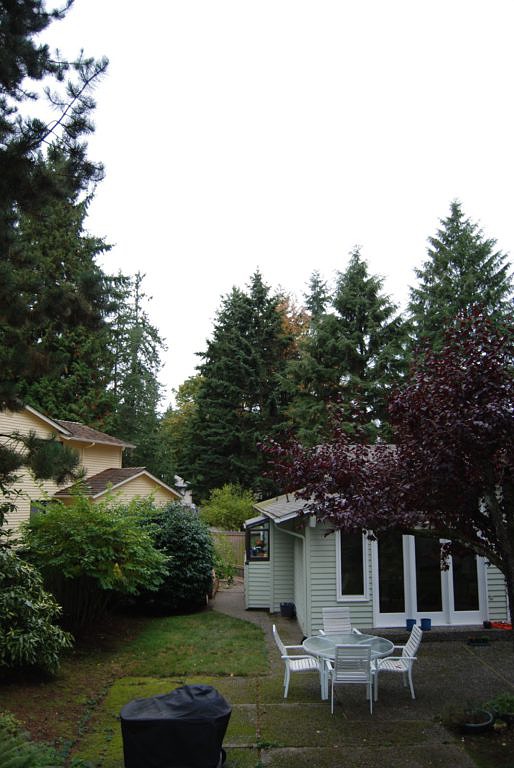 And from the front, before (photo from June): 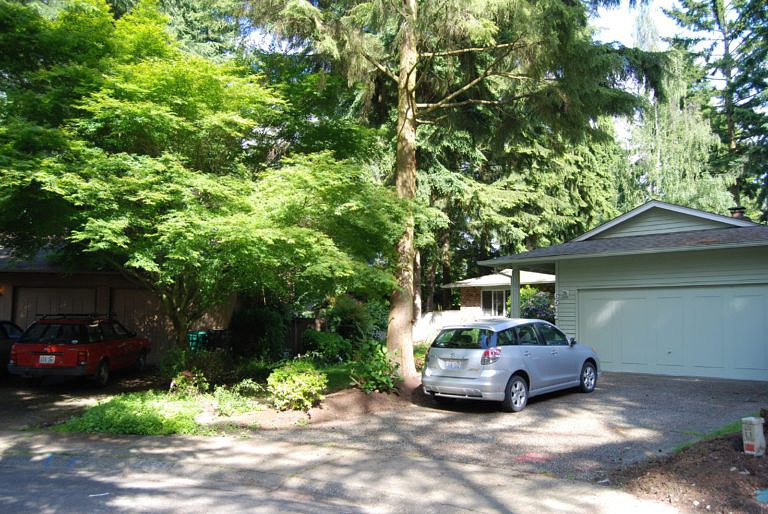 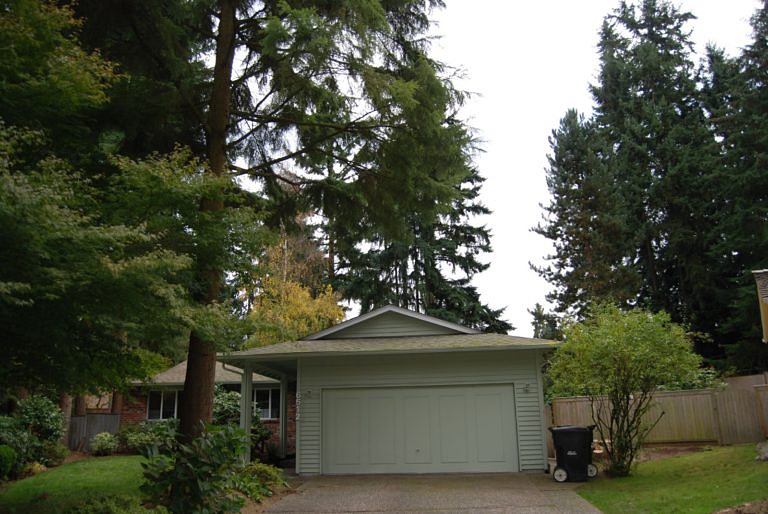 Pictures don’t really do it, but I can’t even tell you how much more sky there is.

And we’re also delighted about all of our new space on the east side of the house (outside our bedroom window) – before it had really just been a forgotten area, but now it’s really worth cultivating. (And it finally gets enough direct sunlight to be able to support bushes and plant life.) We’re excited. 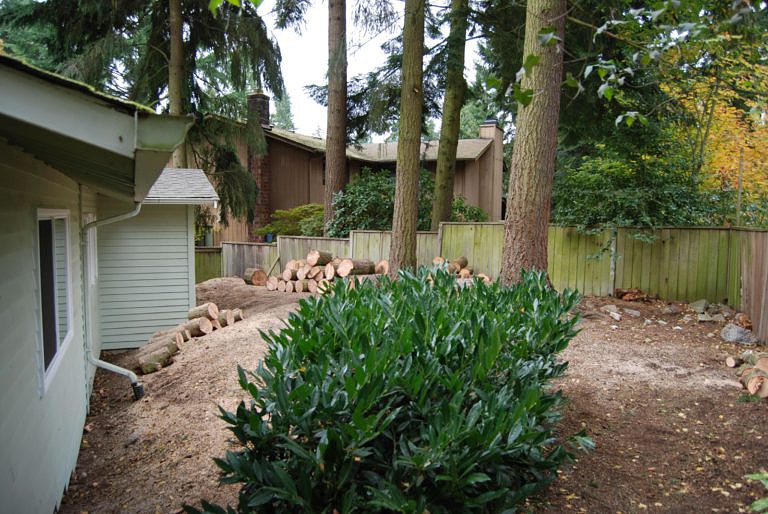 We still need to have three of the stumps ground, and have all of the wood removed. We have some friends who were excited about free firewood, so that should cut down our removal costs a bit. I’m also weighing the merits of just putting a few rounds a week in our yard waste bin. It will be about $150 to have it hauled away, so it’s just on the cusp of being worth it for the time and effort… 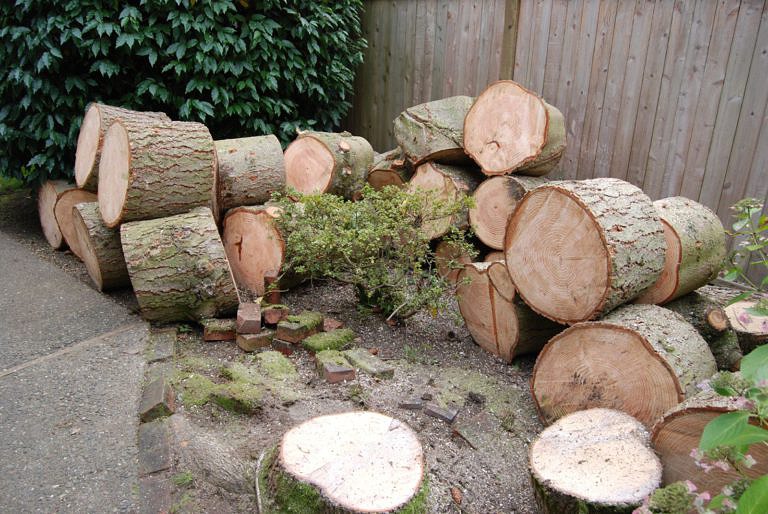