I seem (no pun intended) to be on quite the finishing kick. 🙂 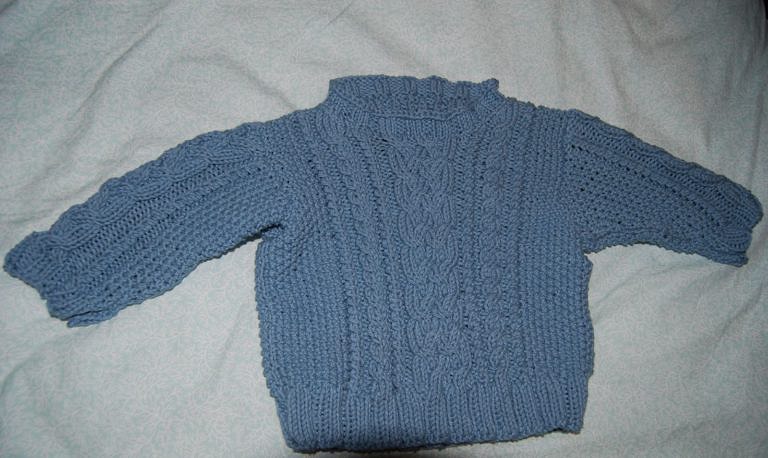 It’s been sitting since April, needing one shoulder seamed and a collar. I finished both in about two hours last night. Finally!! Here’s the back (identical, but the neck comes up higher – click for big on this one – it’s cute enough to be worth it): 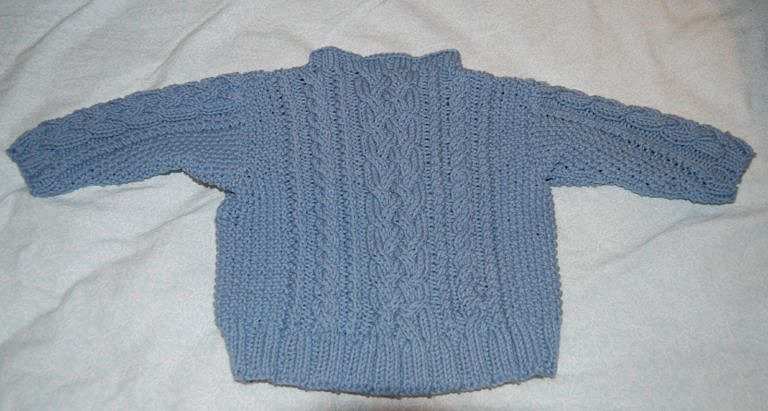 I’m pretty much a fan. The shoulders in pattern were crummy – ugly, if functional, decreases – so I fixed them. The sleeves are actually wide enough I think, but they manage to crumple themselves down into skinny little things. I think that they’ll actually look proportional on. I knit it using the new version of Cotton Ease — probably not something I’ll choose again, despite being a cotton enthusiast in general.

In other news, I’ve been almost done with these fingerless mitts for over a year – just needed the seams up the sides. Less than ten inches of sewing later, I can finally present a set of entralac mitts, made with a pattern I concocted. Fun. 🙂 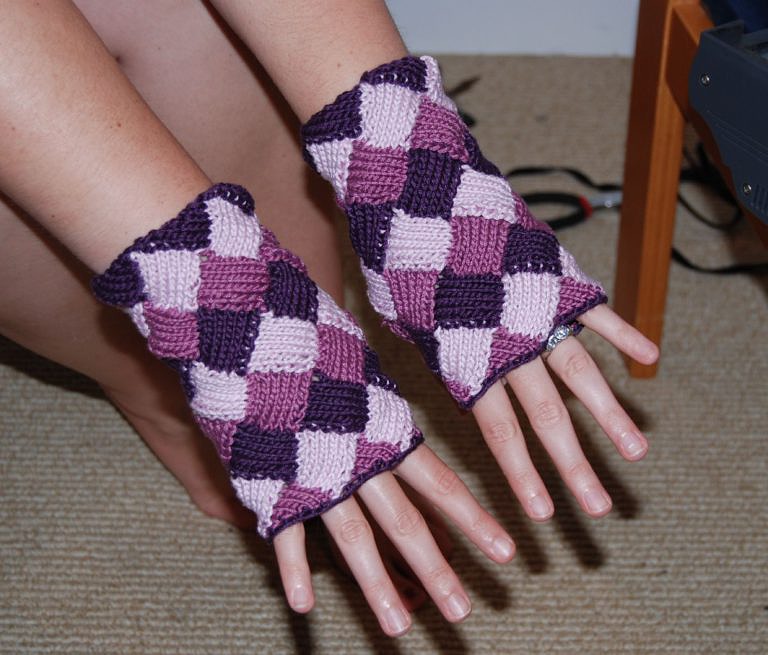 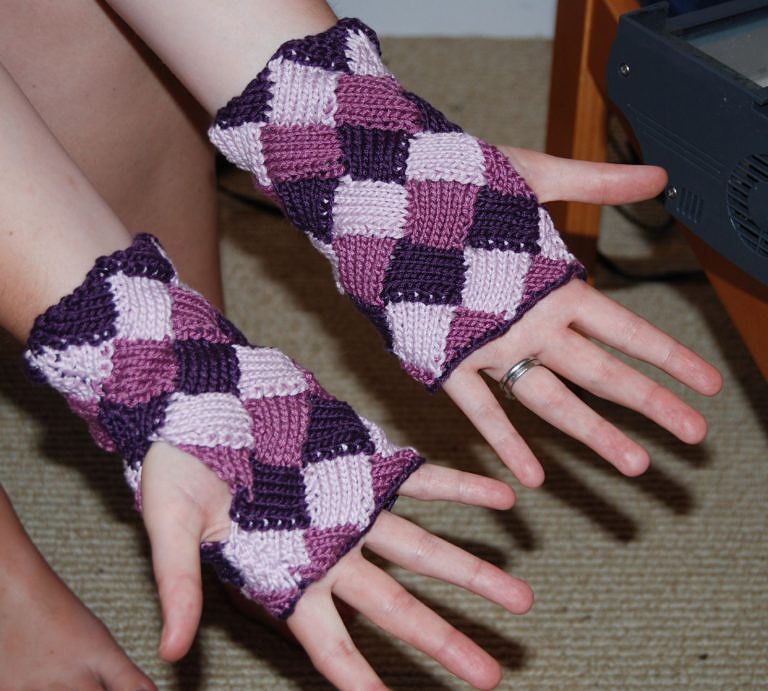 First of all, we have wedding rings!!! 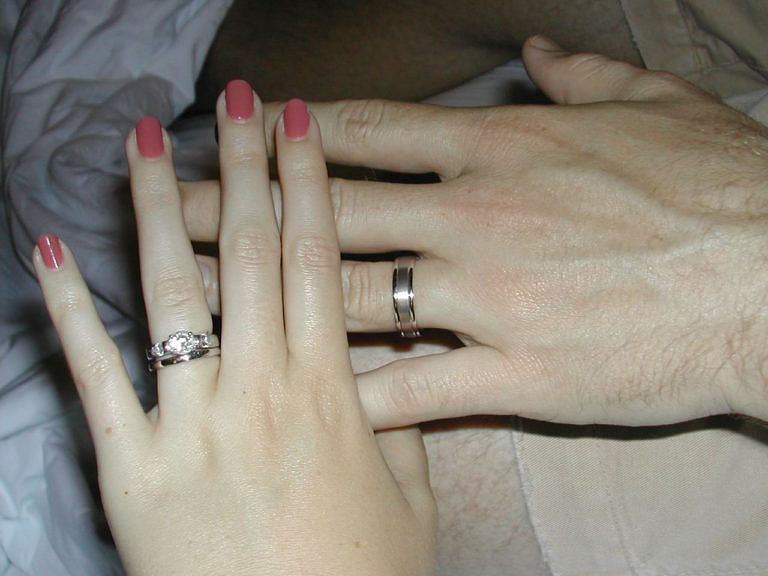 Second, I finally, finally finished the seams and thumbs for Fetching during the first hour or two of the flight. 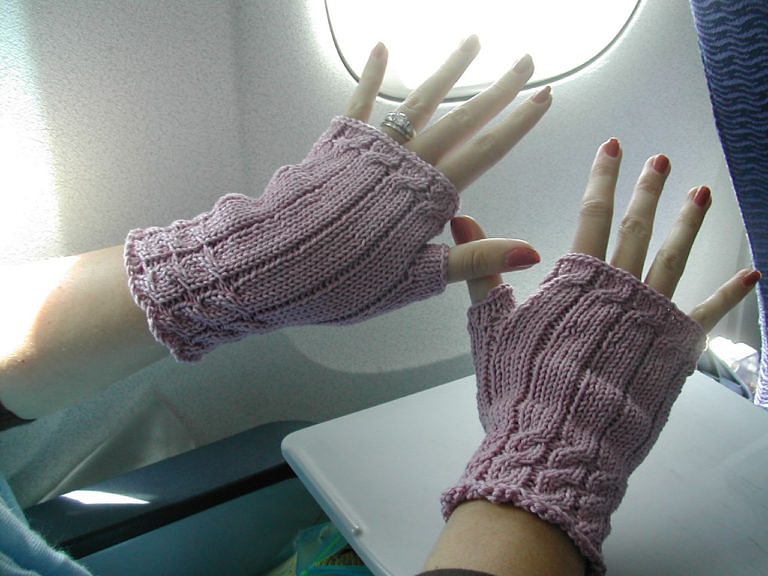 Alterations: I worked 22 (instead of 18) rounds in the 4X1 rib, and then in the final line of instructions before the Picot bindoff, I worked 10 (not 4) rounds in 4X1 rib.

Third, there’s Kevin. He brought Dumb and Dumber for the flight. I found that not having sound for the Mockingbird scene was actually quite peaceful. (Sorry, Shar and Dave.)

Two plane flights, and I have two Fetchings just in need of thumbs and a side seam! 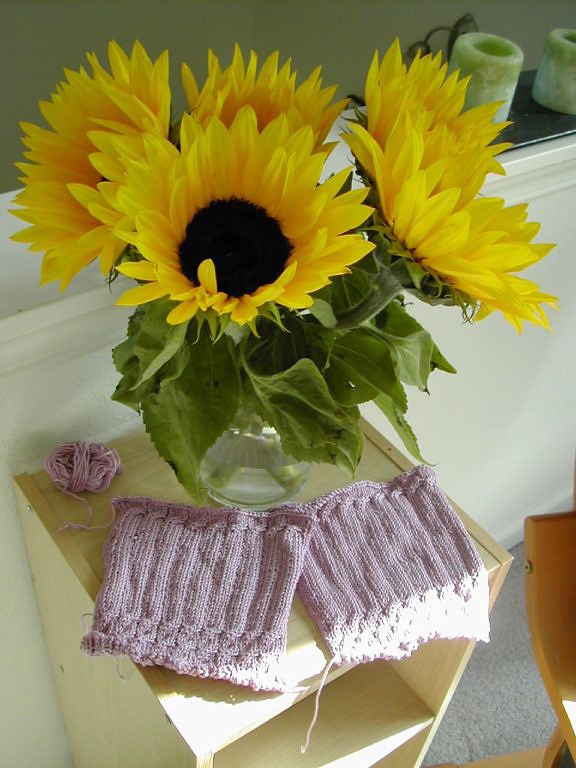 Don’t they look festive with the sunflowers? After a weekend of clouds, the sun finally broke through this morning. Pretty!

P.S. No, your RSS feed didn’t break. I just had a backup of posts awaiting pictures, and so I figured better to load them all at once than let April 2007 fade into oblivion. 🙂 Sorry for the delay!

I was blog-cruising through knitter sites, clicked on an odd mini-banner link, and ended up at the “Church of the Flying Spaghetti Monster” — an pro-evolution site aimed at all of the hoopla in Kansas in 2005. (The pirate portion of the debate amused me. Yarr. Love the x-axis values.) The site has been kept up to date, and there was a post from exactly a month ago that had a video of a lecture on (the flaws of) Intelligent Design by a Brown professor, Kenneth Miller. It’s almost two hours long (and the questions are as interesting as the lecture). If you want something to entertain you as you knit, I recommend it highly.

I have a terrible guilt complex when it comes to biology. The last course I took was as a freshman in high school. My sister graduated with a college degree in it; I’m marrying someone who earned a minor in it and earned his masters in a bio lab. I wish that I’d taken at the very least the freshman bio weed-out course (taught by the aforementioned Prof. Miller), so that I could at least pretend to keep up with either of them. But I didn’t, and while I may know, thanks to Kevin, way more about maps of proteins than would be expected, I regretfully admit that most of my bio knowledge comes from news snippets and political debate.

The lecture captured on youtube is all interesting to me because it’s personally timely — Kenneth Miller is coming to town this weekend to talk to the alums. Neat! But I also wonder — if his guest lectures are up on youtube, what else might be? It certainly deserves more investigation. I was listening to him talk, and remembered that this sort of mind-expansion was a twice daily luxury in college (not to mention the rest of the day, where socializing was equivalent to the Q&A session)… Brown was so interesting. I miss learning. There were so many perspectives in college, and so many experts (some real, some self-imagined). My view of the world deepened by the week, and I was always reading or hearing something that took what I knew and would spin it completely around. There were informed opinions from every side. Now, very few things upend all of my theories. New bits of information change my opinions marginally. I gravitate towards what I already know, and assume that I have a framework that new knowledge will mesh into. The stability is nice: a sign of independence/confidence/calm. Too bad that the lecture’s made me think that it would be nice to be overwhelmed with totally new ideas again. 🙂

p.s. I enjoyed the response to the final question in the video, given all of the recent Gonzales trials, etc. Uplifting.

p.p.s. I’m generally totally opposed to posts without pictures. So, here’s what I knit while I listened to Kenneth Miller and pondered the post-college picture: a few rows of Fetching from knitty, using the extra ball of yarn from the premie sweater. 🙂 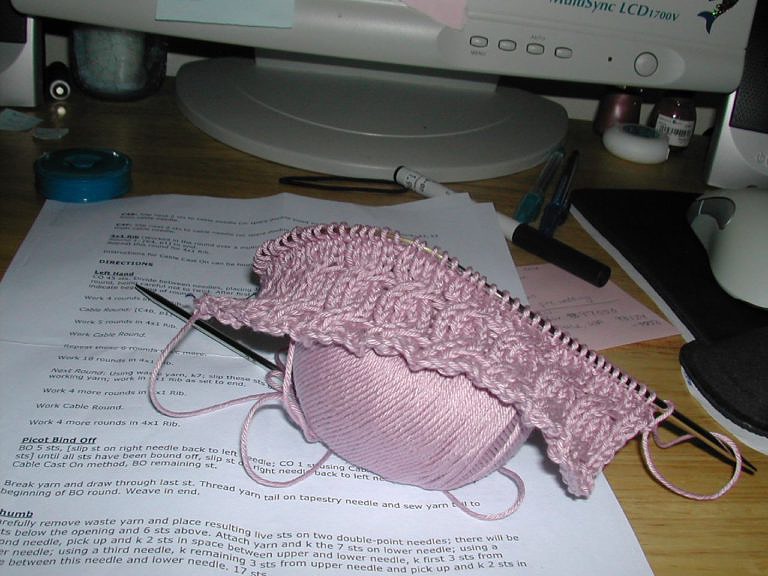 Ages ago in Boston, I bought three colors of cotton classic. At the time I was thinking a scarf, but with only 324 yards, and my preference for wide scarves, it just didn’t seem like enough. By the time I’d done the math, I could no longer find the colors, and so they’ve been sitting, wound and waiting for new ideas.

After seeing some lovely entrelac, I decided to give fingerless gloves a shot. I’ve been playing all weekend. My first try was torn out because I hadn’t understood the need for even numbers of stitches in the squares. (If the squares are odd, you’d have to cut the yarn at the end of each square instead of at the end of each row. Got it.) My second try was way too large. And my third try, while lovely, will be ripped after pictures because these would be gloves for monster hands. They’re about 9″ in diameter, and they need to be 7″. While I’m starting over anyway, I’m mulling over casting on in the round. I would still have to have knit and purl sides, I think, but it would eliminate the side triangles and the seam.

Here’s take three, nestled in amidst the blooming periwinkle. 🙂 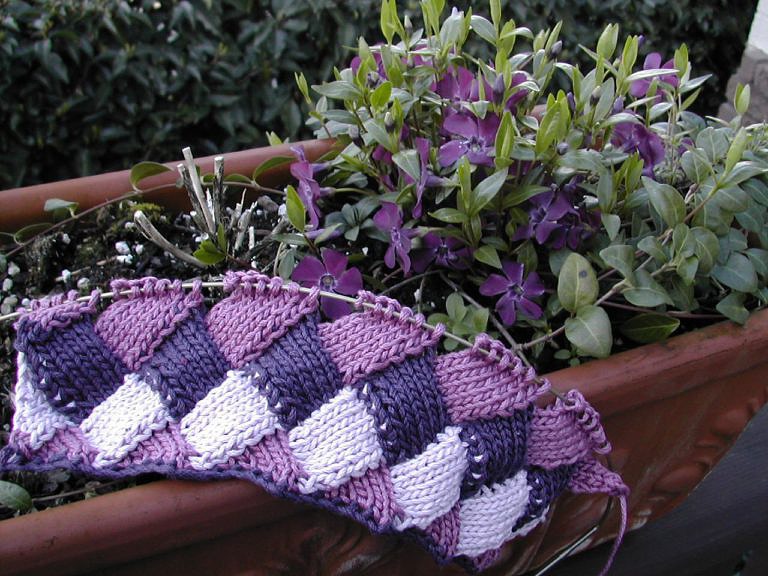 And while I love that picture, the colors weren’t accurate, so here’s a sunny closeup. The medium pink is a dusty rose (not lavendar), and the light color is a pearly pink. 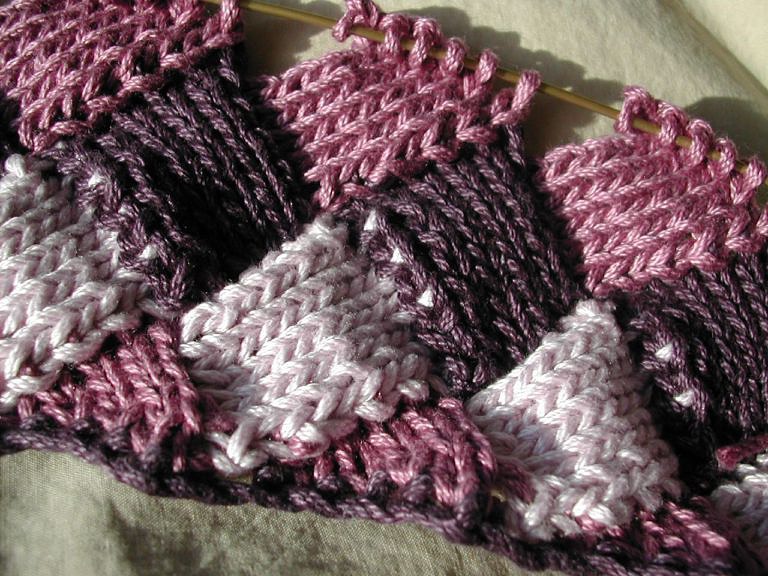 I’d been all excited about using the extra ball of Rowan Cotton Glace from the baby sweater to make a pair of Fetching gloves. I showed up at knitting on Wednesday with the pattern, the yarn, and the needles (a minor victory in organization). But, I was promptly foiled when I tried to find the end of the yarn to cast on. Someone had snipped off about ten sections, each between a few inches and a few feet long, and then painstakingly re-wrapped the snipped bits and tucked the ends back into the middle. So aggravating.

So, since the pattern appears to call for just about every inch (and since I felt sort of ripped off), I went back to the yarn store to exchange the ball for new yarn. I was expecting a battle despite the receipt, but they were great about the exchange — sweet!

So here’s the new ball, basking in the sun (yay!!), next to my frilly tulips. 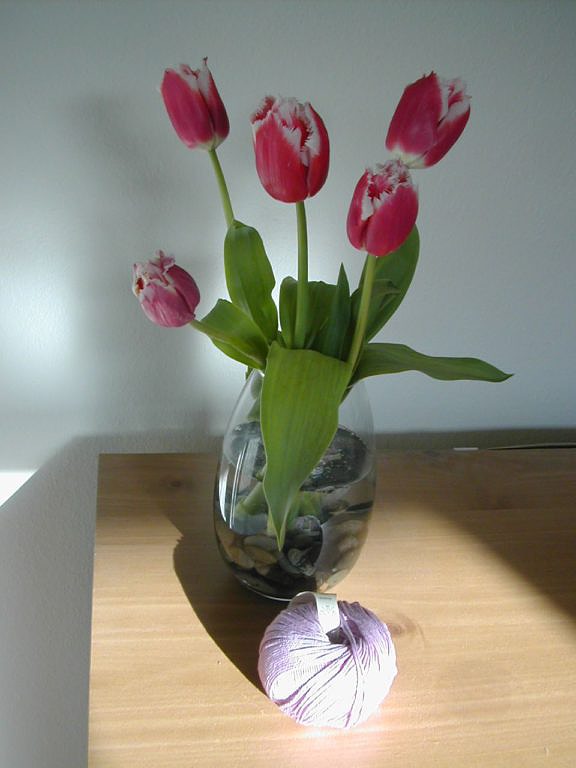