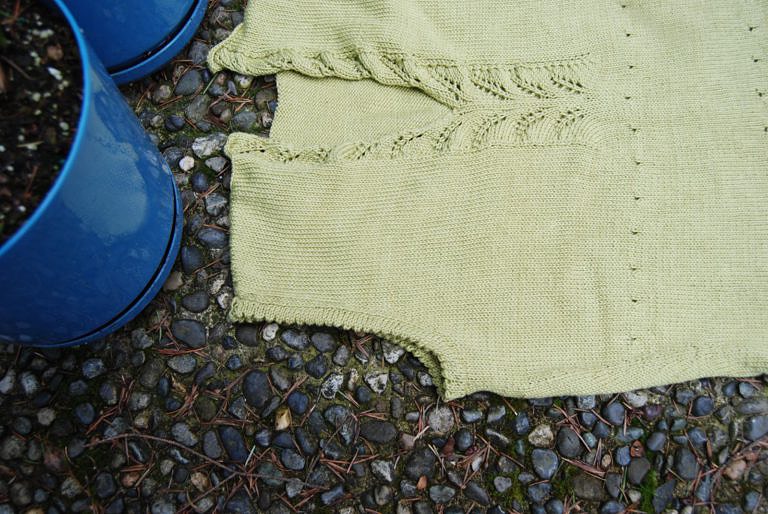 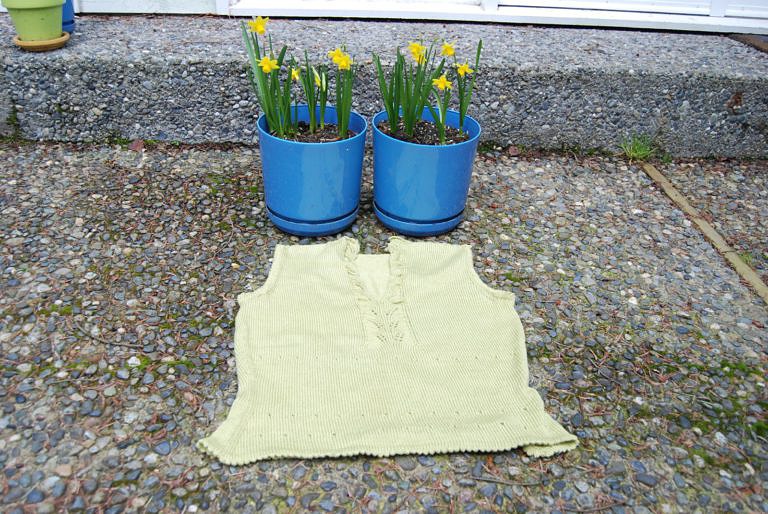 Dinner made, eaten and cleared, finishing a bottle of wine, talking to Kevin about his career ideas, and working on the side seams for Isabella… 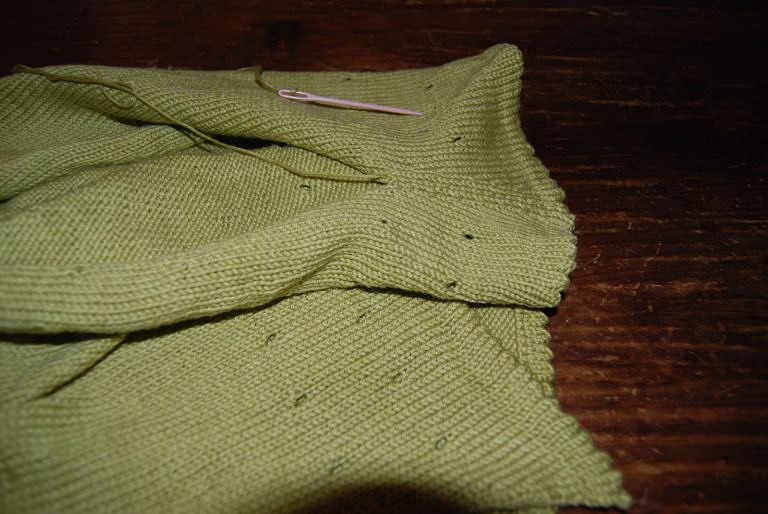 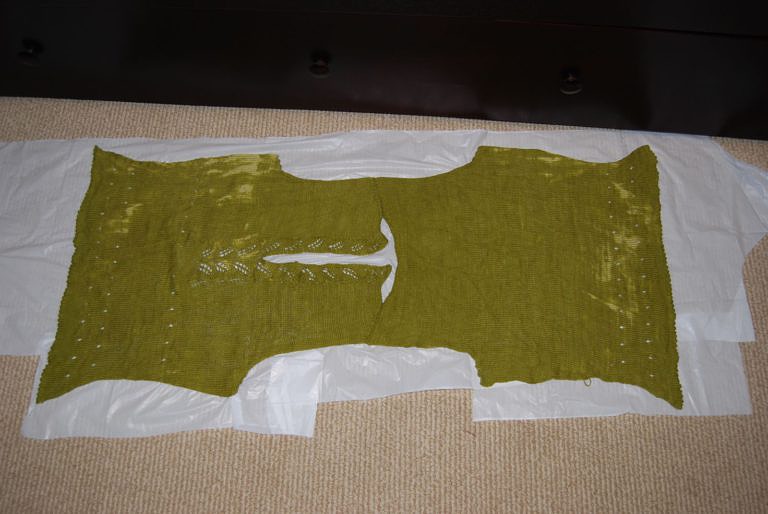 With everything else going on, I’ve really missed knitting – this has been a treat to work on. And I was watching Netflick documentaries on my computer while sewing the picot hem at the bottom, so I’m not sure precisely how long it took, but I’m a huge fan. So lovely. 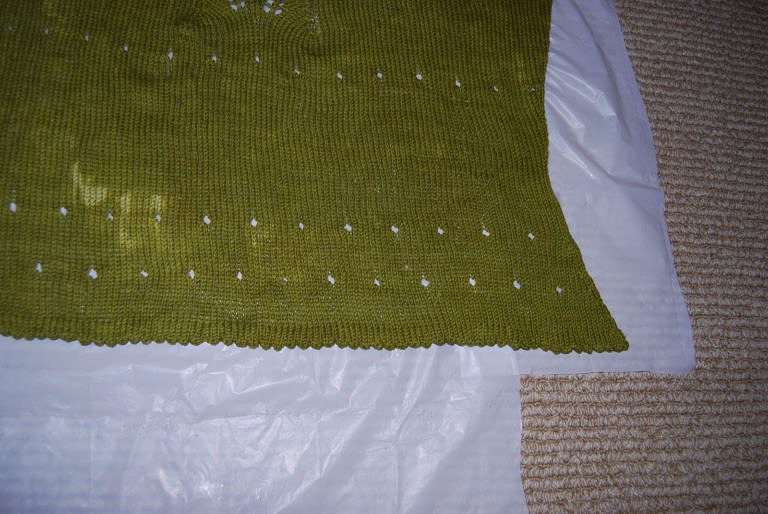 Oh, man, I’m far behind. I got lulled by my lack of bloggable photos and didn’t post, and now all sorts of interesting things have happened: the start of (fantasy) football and the related knitting, the back deck gardening success, the baby born (and sweater, etc. revealed, finally), the quilt progress and regression…

Usually I cope with lack of posting by just putting up five posts in a night (RSS feeds be damned), but for some reason this all feels intermingled, so this will be the longest post ever. Sorry?

So first of all, I went to the Farmers’ market a week ago Saturday. My intention was to pick up flowers, peaches and veggies (all of which were accomplished with the typical farmers’ market glee), but there were a few fun additions. I ran into Pam from my knitting group at the skirt stall, fun. And then after I was done shopping, I returned to the booth and bought one! (My Christmas stocking had a bit of fun money in it, and though we’re a full ¾ of the year later, I found something great to use it on. 🙂 Nice! ) 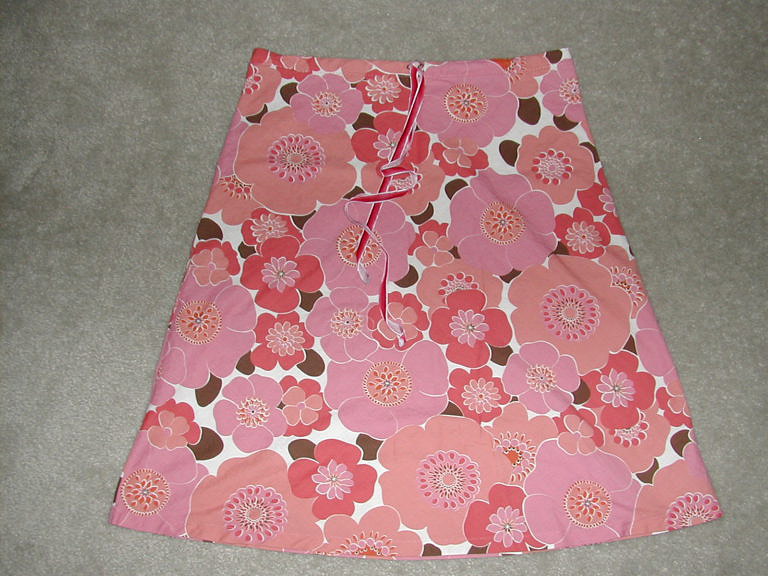 Here are the farmers market flowers with the front of Isabella. I’ve finally made it to the lace – the knitting is so, so much more interesting now. I’ve made quite a few more rows since this photo and they’ve just flown by. All of the football in the last week hasn’t hurt the progress! 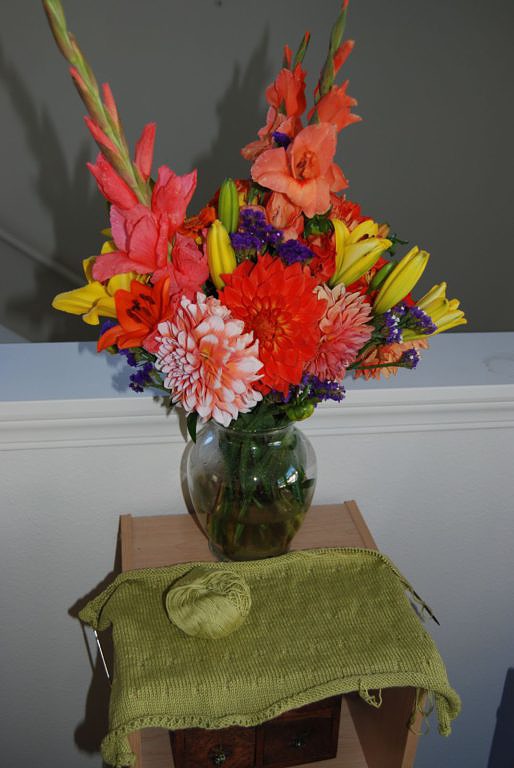 The plants on the back deck have been entertaining. The tomatoes are going strong. I’ve picked five so far, and there are at least 10 more in various stages of ripening waiting in the wings. The beans keep appearing – every time I give up and expect the end, I see 7 more waiting to be picked. No complaints! Best snack ever. 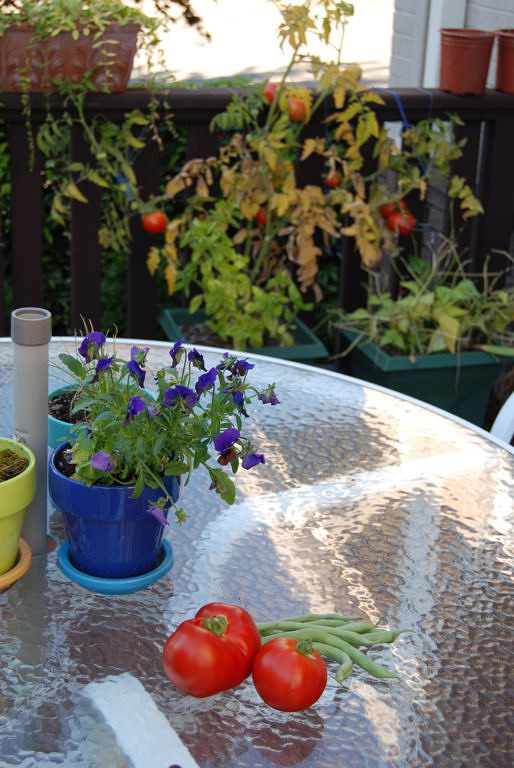 The strawberries just started blooming again a few weeks ago, and the fruits are closer and closer to being ripe to pick. And, exciting to me, the poor pepper plant that got overrun by the beans, is actually making peppers regardless. How cool!! Definitely runty and late, but I’m just delighted by every sign of progress. 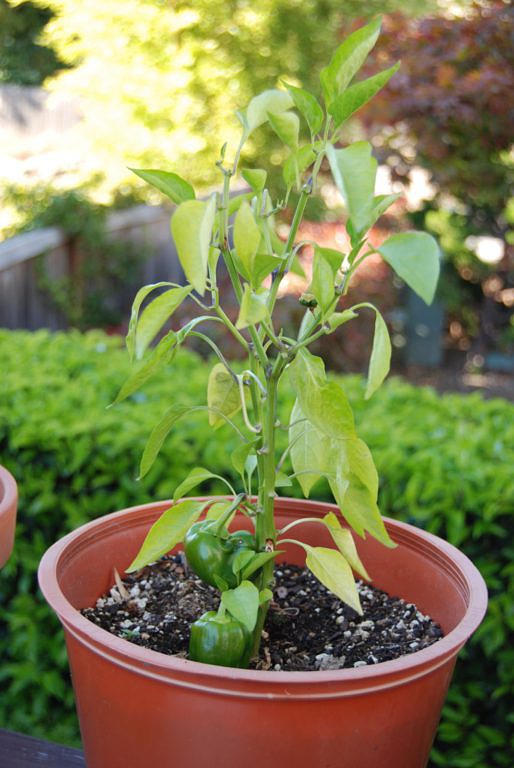 And finally, I’ve been working on the pine trees for the quilt. They’ve been weighing on me ( a classic case of unexecutable vision), and I finally charted and started to construct them last weekend. Here’s the result about a third of the way in… 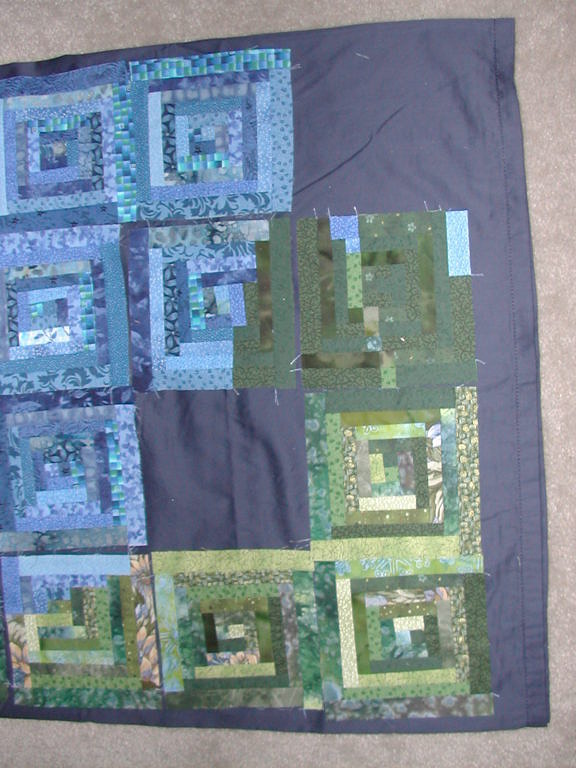 Since then I’ve been finishing and ripping back squares without quite finishing anything. I LOVE the deep-dark pine tree colors up close, but against the lake and land business, they don’t really work. I’m struggling to come up with a reasonable solution… so far I’ve tried improving the tree/water contrast (helps, but not enough). Next up is mixing in more medium greens to go with the darks. I may have to switch to mountains and hills and then return to this – I love the squares but they just don’t fit the quilt.
I meant to write about the baby knitting as part of my catch-all post, but then realized that it would be easier to have my pattern notes separate. So, to be carried on in a later post… 🙂

I seem to be stuck in a phase of only being able to blog about knitting when things are finally finished. Continuing in that vein, I’m ready to post the back of Isabella! But, for general interest, and the fun of showing off pretty new things, I’ve decided to start posting progress pictures accompanied by our wedding gifts. So here’s Isabella’s wicked curl being tamed by the gorgeous wood salad bowl and servers (thanks, Andi!). 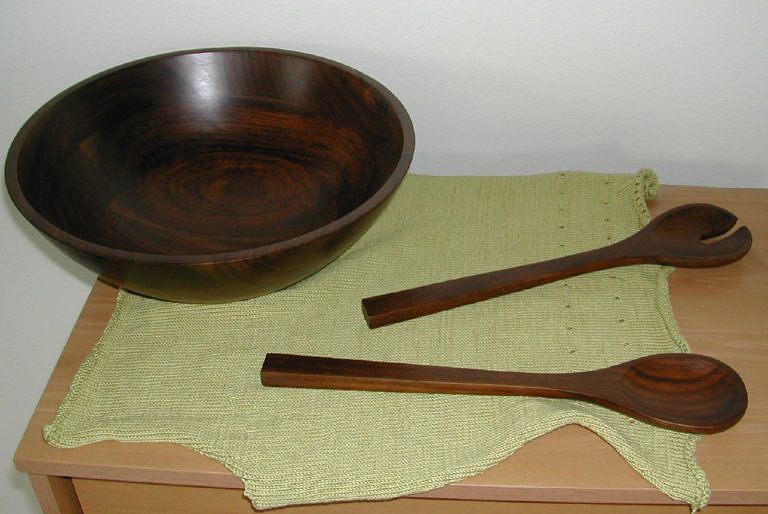 I’d started Isabella before the wedding because I needed stockinette for all the plane rides, and the pattern called for a perfect amount of yarn to match the sale yarn I bought in New Hampshire last summer. Add the green color to the leaves on the front placket, and it all seemed meant to be. 🙂 Fun. 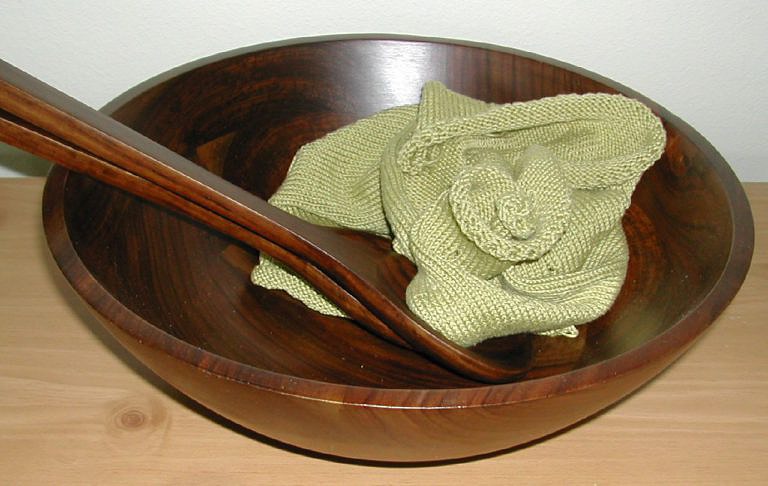 It’s taken a while to get this far, partly from being put down so often, and partly because the gauge is teeny tiny: 7 stitches and 9 rows per inch. I’m about 40% through the yarn, and so it’s still a bit of a gamble whether there’ll be enough to finish the front, picot trim, and seams. We’ll see! I’m optimistic.

I cast on last night for the front while watching a movie (a little late to the game, we’ve just signed up for Netflix. Good fun!), and so here’s the first eight rows of the front, with one of the new fish glasses. 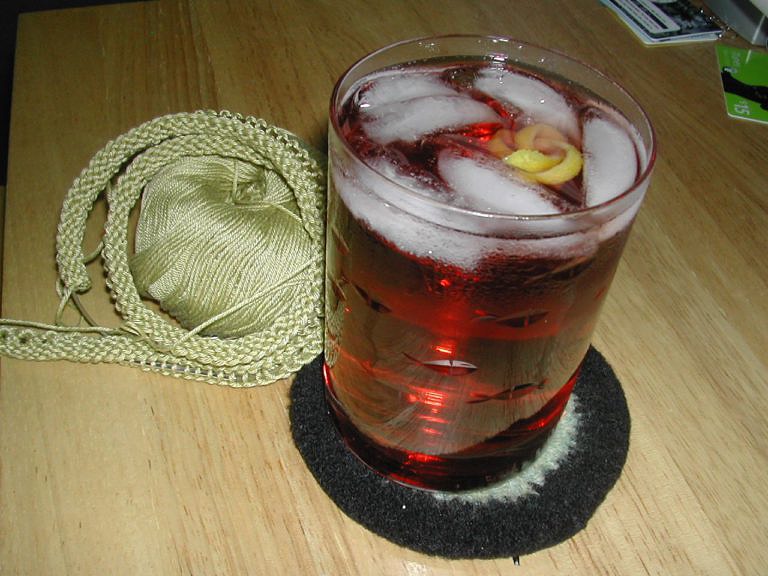 One night of watching all of the backloaded Grey’s Anatomy and 24, and I actually got a lot done on the Isabella tank. Enough, even to take a picture that isn’t just a mad curl. 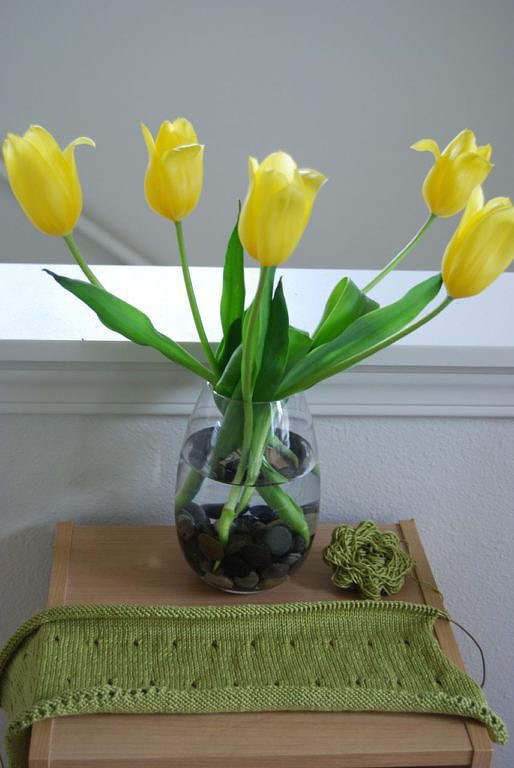 It’s at the waist, now — once I hit 6″, I’ll start increasing again. The knitting is shown to advantage with the Batchelor Party Tulips. Kevin went to Vegas this weekend with his fraternity. I came home to find that before he left, he went grocery shopping and bought tulips. 🙂 He’s clearly with the program, and gets what makes me happy. 🙂 Nothing (and I’m being totally serious) better than $4 tulips.

Only three weeks till the wedding!

I started working on Isabella (a new knitty pattern). The major draw was all of that stockinette, plus I have hopes (we’ll see…) that it will be a perfect amount of yarn for the leaf green Jaeger Siena 4-ply that I bought on sale in New Hampshire last year. In any case, given the things to think about , and the buses (I’ve gotten back on the public transportation bandwagon), and the impending planes for the wedding and honeymoon, stockinette seems perfect. 🙂

Despite many hours and many rows, at a gauge of 7 st/inch it doesn’t really knit up all that quickly, so pictures so far are boring. The best I can do is show you it with the over-bright pansies, geraniums, and mystery pink flowers. 🙂 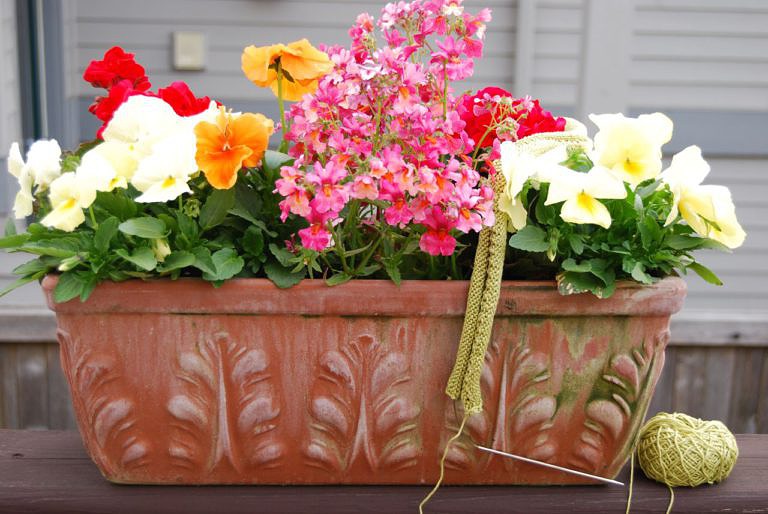 The interesting part of that picture though, is the little dude that you can’t see without the zoom. I discovered him a week ago when I was watering the planter and inadvertantly watered him. He was not pleased. 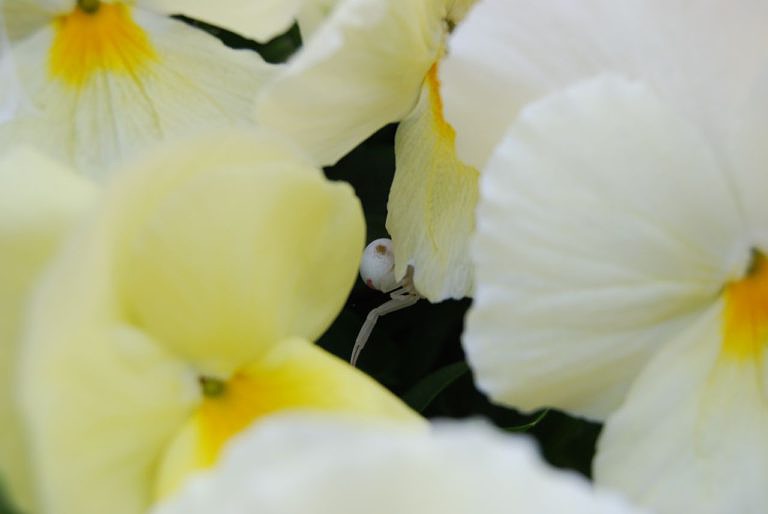 The best I can tell is that he’s one of the 3000 species of the family Thomisidae. The common names are Flower Spiders or Crab Spiders. Both are apt, but the second one especially rings true — when I first saw him, especially moving, he looks like something we’d discover in our tank at one in the morning.

The lavendar spots are especially cool. While I am *not* a spider fan, and he’s big, he genuinely acts more scared of me than I am of him. He’s always on or under the same bloom, and I’m getting used to him. 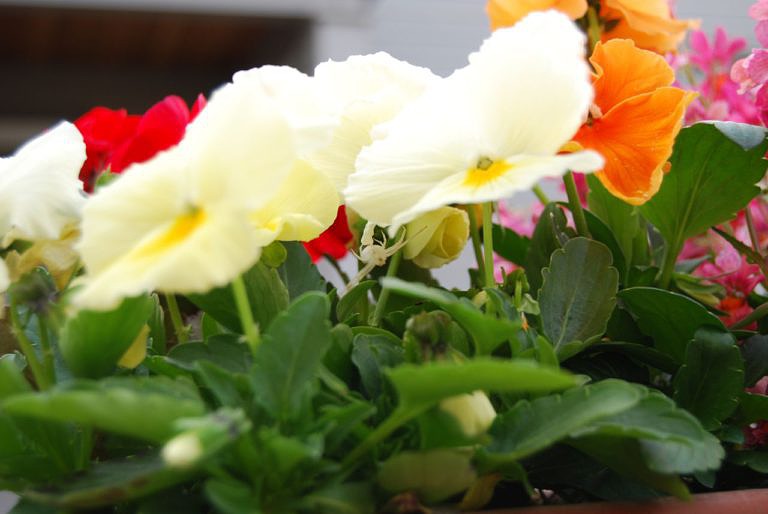