The first of the 2011 tulips — I love this time of year (in spite of the lingering gray) for the parade of cheap tulips and the hope of occasional clear mountain views. 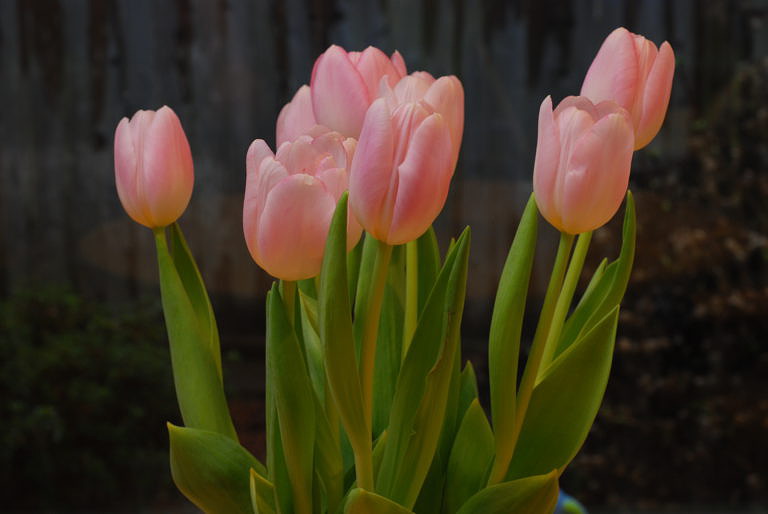 This is our 7th winter in Seattle (can you believe it’s been so long?) and it feels like the seasons go something like: (starting in late August) preliminary gray, fall leaves, deep gray and mist, Thanksgiving & Christmas, primroses (2 or 3 weeks in January), tulips & mountains, deep grey and moss, spring (this is short, too, a few weeks max), and then vivid long-day summer, before the cycle begins again. 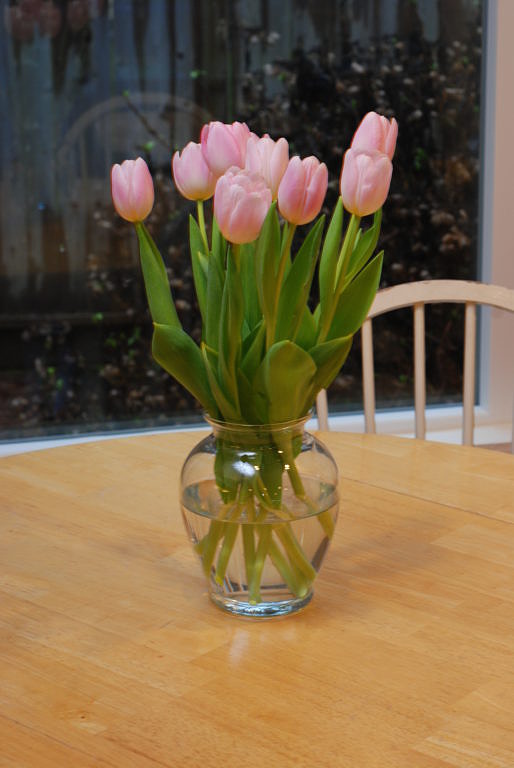 Aside from summer, which is obvious in its appeal, the mountain & tulip season is probably my favorite time of year out here – so much potential and building of momentum after a period of subdued indoor hibernation. This is the time of year when everyone starts finding outdoor activities even if it’s drizzling a little, and the twilight almost lasts long enough so that the first part of the drive home is still under deep blue (rather than black) skies. Plus my little 10-for-$7 tulip muses to speed the winter along. 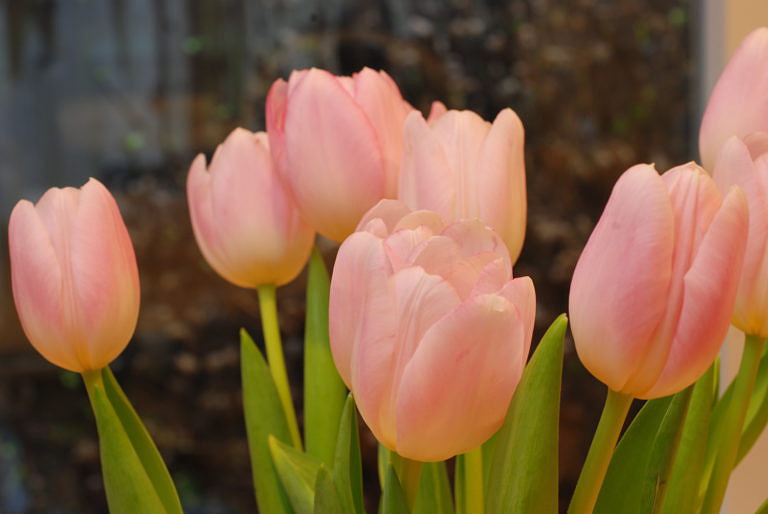 I had to grab the camera on the way out the door to work, since both of these guys were just hanging out on the fence right outside the kitchen window. Any help? What are they?

Bird #1: We’ve been seeing these ones for years – bigger than a robin, not as big as a stellar/blue jay. (For some reason, I’d been calling them mockingbirds in my head but I looked those up and they’re not even remotely similar. So now I’m at a loss.) 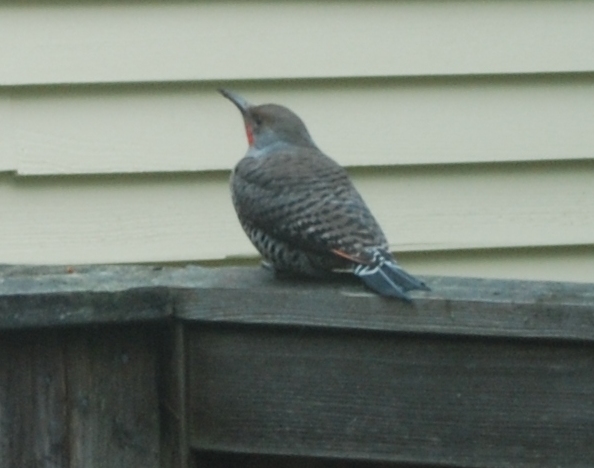 And Bird #2: we’ve been seeing these a lot for the last few weeks – nice color coordination with the neighbor’s deck and grill. About 2/3 the size of a robin. 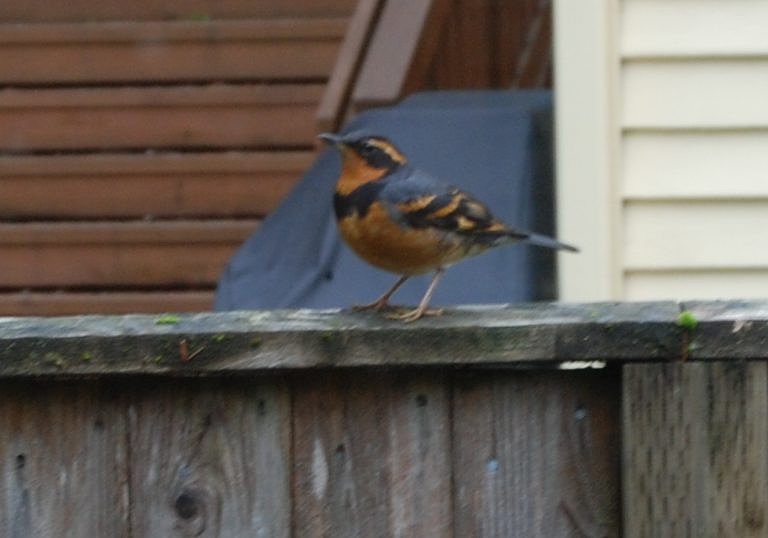 Otherwise, we have a zillion little chickadee/sparrow/wren type things flitting around too, now that the feeder is up. The squirrels spend a lot of time beneath it combing through the seed shells, but I haven’t seen them manage to disrupt the feeder itself. (Victory? Or too soon to declare?)

Everyone at work mocked me for saying so, but I swear Saturday was sunny – I ended up doing over four hours of yard work. I sawed up the Christmas three and about half of the felled holly tree before I ran out of bin space, and then did a lot of weeding. I pruned the Japanese maple. I even finally planted the bulbs I bought on late-sale in early December (sprouting through the bag, of course. How else would one plant tulips?). 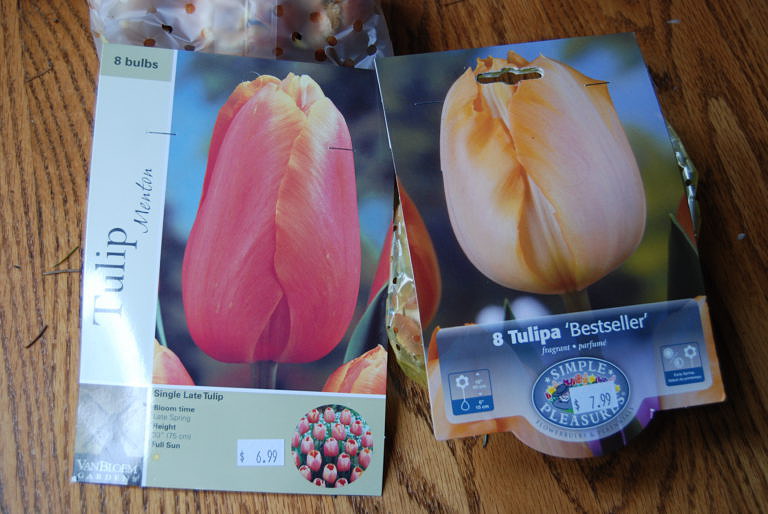 Given that all of our other tulips are already up, it’s probably too late for this spring (as usual), but maybe they’ll be a fun surprise next year – I planted all sixteen in a smallish rectangle outside our bedroom. Between the early bloomers and late bloomers, I think they’ll be an interesting addition to our existing crocus and tulip mix out there. Meanwhile, the kiddo seems like even more of a risk factor for our bulbs than the squirrels – here he is antagonizing/exploring some of the sprouting tulips while Kevin weeds in the background. 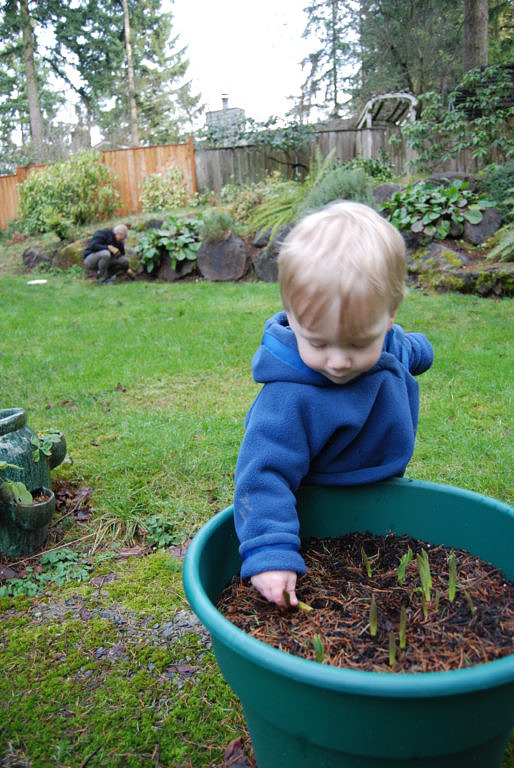 The bulbs are popping everywhere – tulips by the front walk, side yard, rock wall and in all of the containers. Daffodils by the kitchen. Crocuses in the back, side, and by the kitchen (though I haven’t seen the front ones yet). And even my little Easter planter from last year, relegated to a spot in the back and then ignored, is going full-force.

We have so much work to do in the yard – catch-up on a year and a half of haphazard yard work since the wasp incident in my third trimester, not to mention the normal seasonal stuff. There is just tons of weeding and pruning to do right now. We made a small dent –about a sixth of the rock wall, starting from the far left. Not terrible. I was playing with the panorama tool in Windows Live – here’s an 140-degree view of the rock wall in the back.

Taking out the holly tree really opened up that back corner – now we just need to do a ton of weeding. I’m thinking that if we got ahead of the weeding early (and did a very thorough job) and then mulched, it could be a great thing over the course of the summer?

And here’s one last happy shot of Kevin right before he took the kiddo inside (and let me spend another hour until it got too dark working without an increasingly cold toddler. Thanks, Kevin!!) 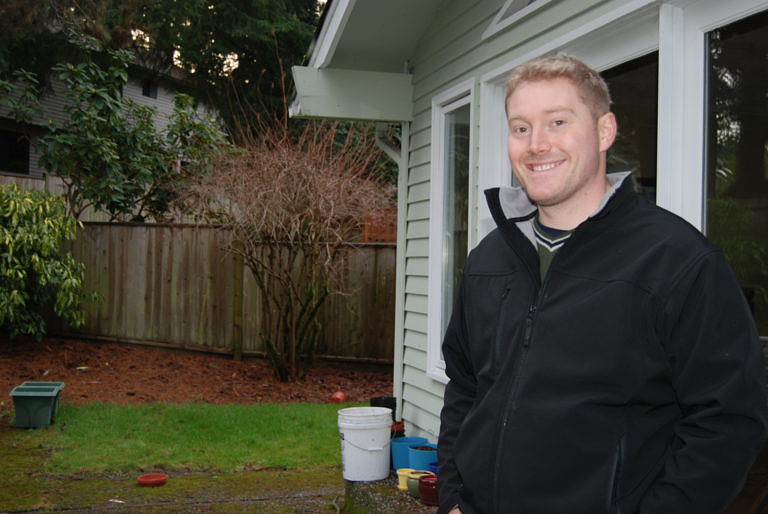 H. did a great job ferrying potting soil around from container to container, and gathering up a stick at a time and bringing it to the bin. Everyone has their tasks to complete. 🙂

I thought I’d try appliquéing cute things on some of the plain toddler shirts we have. So I bought Heat-n-bond Lite (which seems to be the medium of choice for this sort of work on the blogs I read), and happened to also see a cute little bird stencil. While Kevin and the kiddo went to the grocery store last weekend, I set up camp in our office and traced, cut and ironed, and watched three shows of Jon Stewart online. Such a fun use of an hour. When the guys got back, I had this, just waiting to be sewed (I planned to embroider eyes and beaks and branches later): 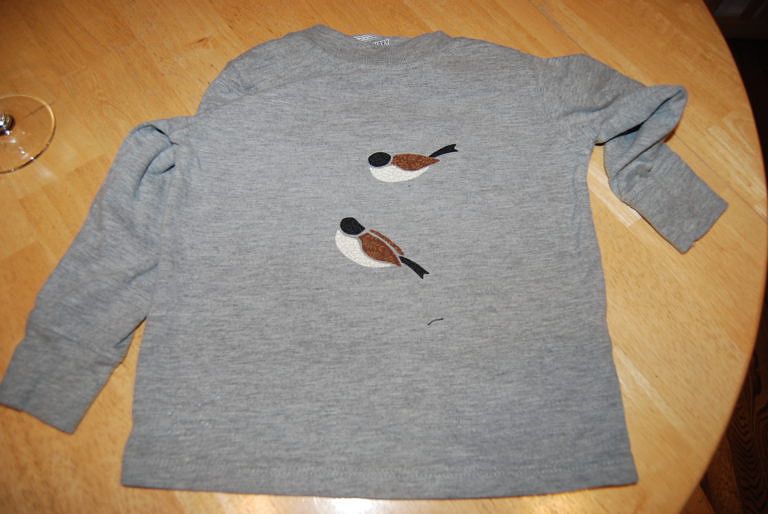 So we took a break for dinner and bedtime, and then I sewed during the Patriots game. I started by hand – so slow. So then I switched to the machine, but it was hard to keep the shape of the line right on such small pieces, and then I had a string of bobbin catches as I worked. Frustrating – the birds would have been so cute. The last bobbin catch would not come unstuck, and I ended up tearing the shirt. Hmm. Lessons for next time? Bigger pieces (not teeny tiny curves), start on the slowest speed setting, and use the walking foot. Rather than totally giving the shirt up for lost, though, I ended up reverse appliquéing in a turtle print that I love. 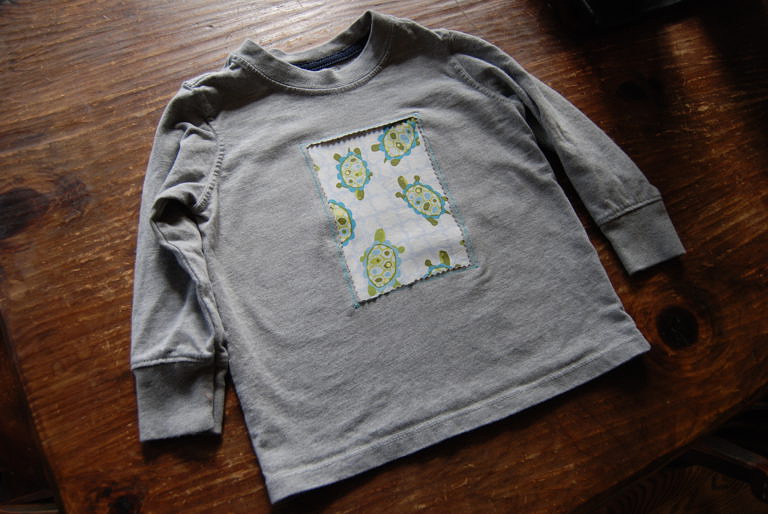 Here’s the inside of the shirt – I used the pinking shears on all the edges, shirt and patch. The stitching was just very tight, small zig-zags. 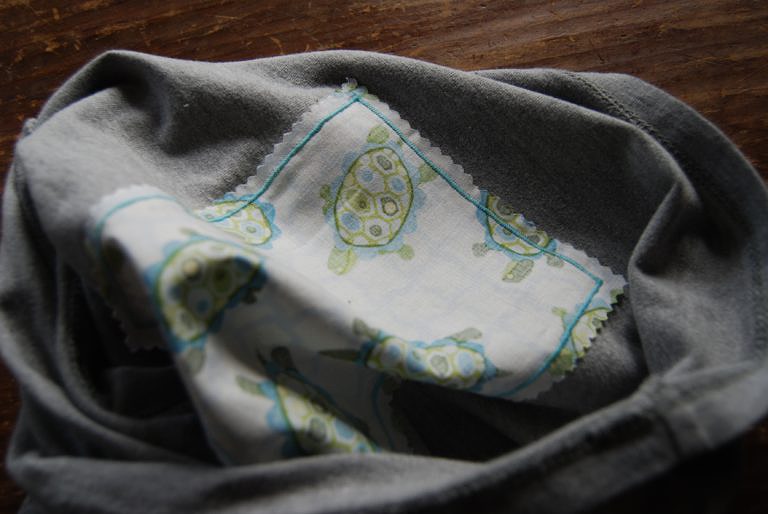 If I did this exact same thing again, I’d do a double (back to back) layer of the cotton, since I think it’s probably more airy and colder than the jerset knit. There’s enough of the turtle fabric to make matching pants – perhaps I’ll get around to that at some point? Love those turtles. 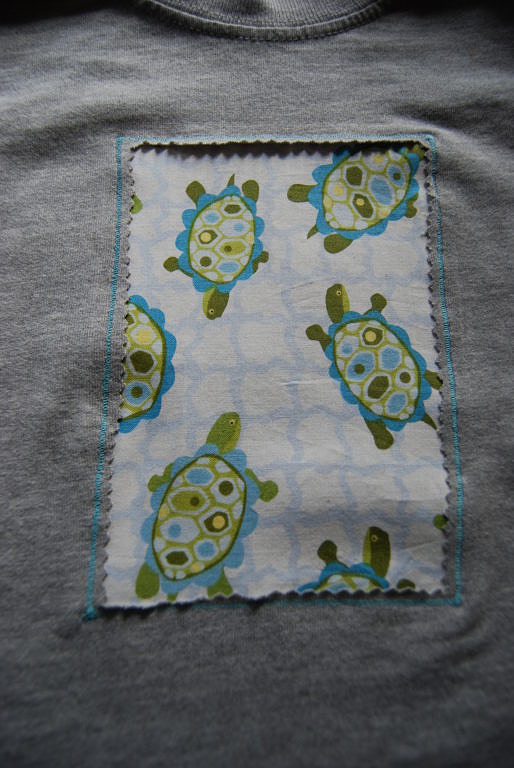