Hmm, what is this bleary picture from one in the morning? 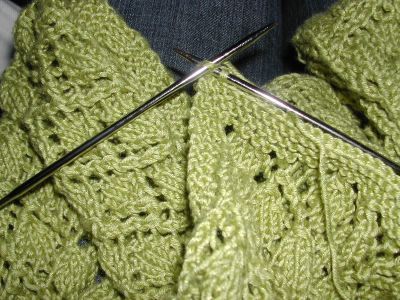 The last two stitches of Branching Out, finished at long last. I used two balls exactly of the Madil All Season Cotton, and was even able to end on the row of the pattern I wanted to with a six inch tail. Here’s the scarf looking rumpled and unblocked:

I’ll post a full post-mortem, including the pattern modification that I used to make it wider, once I get this blocked, since then I’ll have better pictures to accompany it. Besides, the jury’s still out on whether the modal in the cotton will make it too drapey when combined with the lace — only blocking will tell.

Seven months of truly intermittant progress, and I’m done with the first sock! 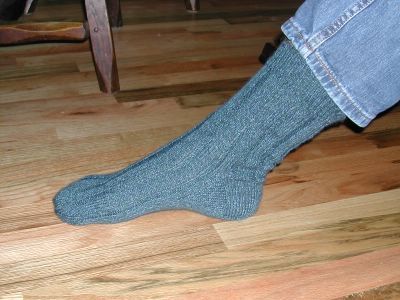 Kevin was impressed, and seemed less bothered by the pace of the project than I would have thought. I suppose that he’s watch me meander my way through enough things by now not to have his hopes up. And the sock actually fits him, which shocked me (anything that’s only slightly big on me seems like it would be circulation-stopping on Kevin. However, it seems that the faith that I rather dubiously put in the pattern was justified.) I was most excited to finish in one ball — there was only about a yard and a half left when I bound off the toe. (Perfect for darning later?) 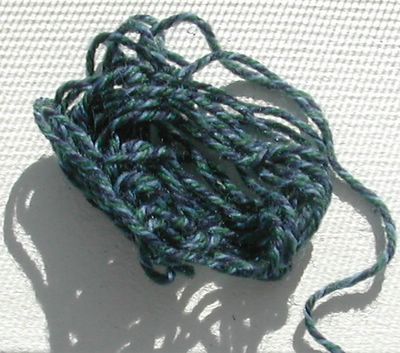 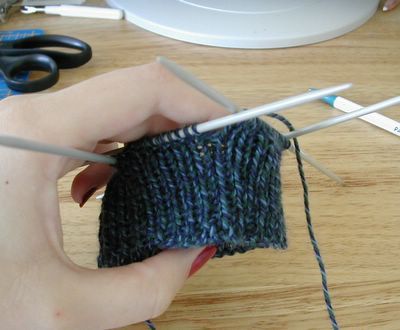 No one would ever accuse me of being a quick knitter! 🙂

I’ve been working on a skirt, knit out of Lion Kitchen Cotton, that I’ve been making up as I go. I wanted the bottom to be scalloped lace, and instead of merely using one color, I was thinking of alternating the rose I have with a lighter pink, as that’s the way it appears in my knitting pattern dictionary and it’s really pretty. Lion has a light pink (#101) but after a long stint of googling and calling stores, I’ve given up on ever finding some. It appears to be pure urban legend. Instead, I thought I’d go wild and spend the $5 on a ball of white kitchen cotton and a pack of RIT dye, since everyone in my knitting group raves about the results they get by self-dyeing. I got home, unwound the yarn, boiled the water, and started making test strips. They kept being way too bright, so I would dump out half of the dye-filled water, refill the pot to the brim with fresh, and try another strip. I was trying to be neat, but still had to do some fierce scrubbing to keep the red dye from permanently staining the white plastic and paint in my kitchen, and I had a miserable time trying to keep my hands clean so that I didn’t inadvertently leave handprints everywhere.

By the time I got to the one on the far right, I was happy with the color, so I dumped the full tangle of white yarn in. Something obviously went awry in my test-strip process, however, as this was the god-awful result: 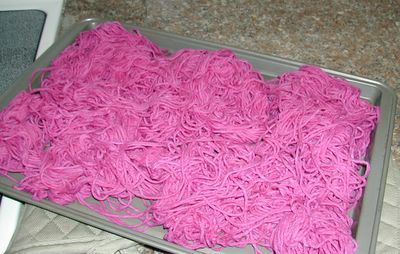 Kevin’s only comment was a somewhat horrified “did you MEAN to do that?” Utterly defeated, I put the mass of fluorescent mauve horridness out on the deck to dry, and left it there for a week. I don’t know if it was the sun(?), but when I finally went out to reclaim my cookie sheet, the top half was a lovely light pink. The bottom, however, was just as hideous as before. I flipped in and left it outside for a few more days, then I ran it through the laundry once to try to lighten it (worked a bit, but mostly just turned it into a 236-yard snarl). I’ve spent the last week picking out the myriad knots so that I could wind it up. 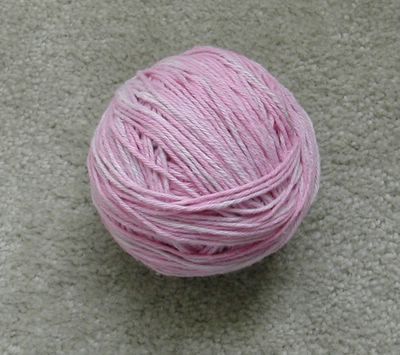 It’s finally done, though it clashes with the skirt, and I don’t think I’ll use it for anything else — I think this ball will ultimately be going the way of the red cotton-ease and will be gifted to a crafts program somewhere. Chalk this up as a learning experience: no more dyeing. Back to the single-toned lace for the skirt. 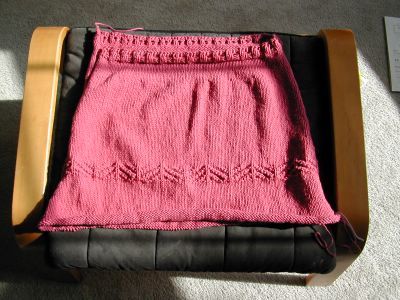 Have you seen this? Especially if you live in the Seattle area? It’s one of my new favourite sites: http://busmonster.com/

It’s still no Boston System Map, since you can’t see all of the connections and all of the transportation options, but it was good enough to make me get my work-benefits bus pass and start riding #245 to work. Public transportation is great: a walk on either end, free time to read or knit, and I don’t have to contend with the other drivers — so many of them aggravate me. It’s nicer not to have to think about how slowly/erratically/cluelessly the guy next to you is driving. I know a lot of people (and date one of them), who think of their car as an private oasis, where they control everything, can burn off the irritations of the day, and get to spend time alone communing with themselves. Though I loved having my license in high school, the novelty has long since worn off — I could really do without having to drive places every day. Long trips to see new places? Sure. Going through the 17 stoplights it takes to get from home to work? Nah.

Which brings us back to busmonster. Click the “Routes” link at the top of the page, type in 245, and you can see the entire route, complete with stops and the current locations of in-service buses! Pretty cool. 🙂 And then, if you click on the individual stops (look like tear drops), and then show all routes, it lists everything coming through for the next half hour! Good for connections. 🙂 And then, if you need to see the other rootes that go through a stop, you can enter them in with commas and see where they all go! Good for exploring. 🙂 And I know it’s nothing new, but I love the traffic status. I don’t really use it, I just think it’s clever.

I’m done with the all-blue squares for the sky! 🙂

I was talking to some people from knitting, and realized that they were under the impression that the squares were large. Not at all! Each stripe of the fabric is 1/2 an inch wide, and the entire square is only 5″x5″ (or at least, that was the intention… very few of the “squares” actually fit the moniker). So here’s a picture with my hand for perspective: 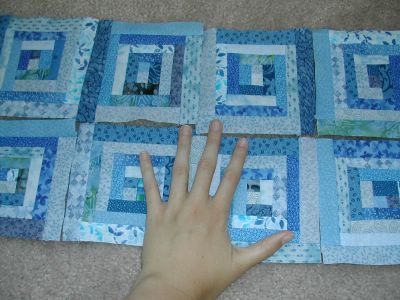 And finally, since it’s always fun to see the messy side, here it is (it looks surprisingly similar to the front, since each strip starts as an inch wide, so the two 1/4 inch seams fold back to present the same right-side color): 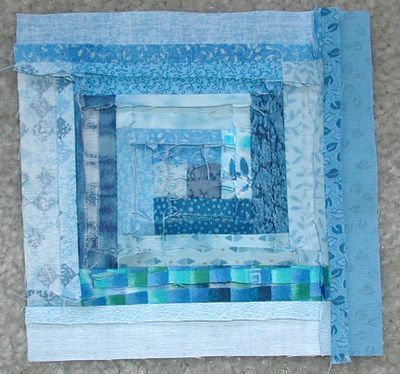 Once upon a time, we had a lovely spikey tropical plant that came home from work with Kevin after his team moved and he didn’t get to keep his window office. We turn it now and then since it seems to lean slighty towards the light, but otherwise there’s been no noticeable change in the thing since November. Then, two weeks ago, it started putting out new stalks. 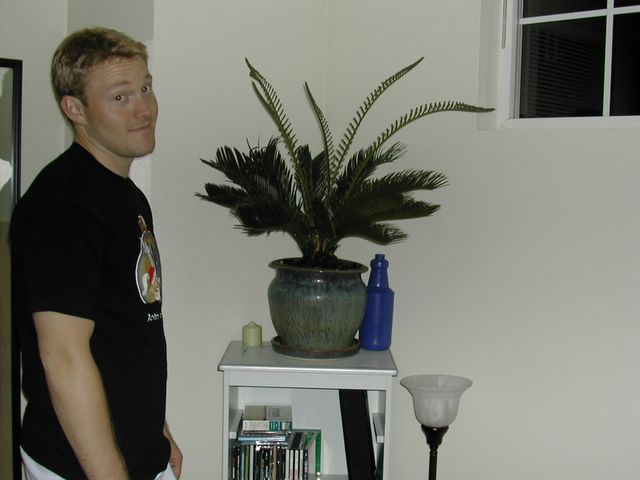 And now, it’s turned into the rapidly growing man-eater pictured below. The next picture was a mere week ago, the second is today. I’m afraid that it will break out of it’s pot. (I’ve heard of that — is it possible?) We’ve stopped watering it in an attempt to subdue it, but so far it seems unphased. We don’t know what it is or how big it’s supposed to get.

After the luck with the cyclamen, I’m turning to all of you again — what is this plant? How big will it get? And is the pot in mortal danger?

This is one of those “Worth A Thousand Words” pictures. Life has been very busy. Kevin gave me the box set of Harry Potters 1 through 5 for my birthday (what an awesome gift! especially since my parents’ copies are all the way away in New Hampshire and thus hard to borrow!), so I’ve been at Hogwarts for every spare-able minute. Unfortunately, the later books are THICK, and my reading time was starting to impede on my knitting time. I feel like Hermione would have found a way to get the books to lie flat (and for that matter, to turn pages automatically), but I lack her skills. So, I invented the awesome Cascade-220 book-opener loop, proudly displayed below. The only downside: makes it harder to get to bed on time, now that it means leaving both reading and knitting. And yes, for those readers with sharp eyes, that is the never-ending sock on the needles. 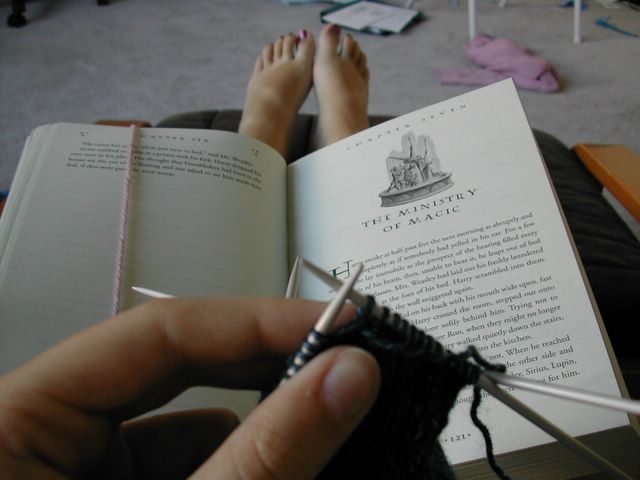 P.S. Check out my left foot: worst sandle tan Ever.

We’ve had about two weeks running of amazing sunsets. I think it’s been a bit hazy, and it’s producing amazing pinks and oranges that linger for nearly an hour. I’ve been getting home late, recently, and it’s been making for lovely, tranquil drives.

(These were taken from the top of my street.) The only pity is that sunset’s coming sooner, and it definitely isn’t that bright light past nine anymore. I love the long days — I wish they’d stay a bit longer.