The Red Sox played the Yankees this morning… and wow. Friday night’s game was obviously disappointing, Saturday’s didn’t get broadcast in the Seattle area (travesty!!), but today made up for it all. I only wish I was still living in Fenway, to listen to all the car horns beeping in time to “Yankees Suck.” 🙂 Boston rocks.

In other news, Kevin missed his flight back, so he’ll get in late tonight instead of 3 hours ago. 🙁 Bummer.

In an apparent attempt to cheer me up, however, the Hallmark channel is playing the Parent Trap, followed by Pollyanna. I have never seen the full Parent Trap. My mother thought the mother was simpering, the father was browbeaten, and Susan & Sharon were irritating, so I don’t think I ever saw the whole thing. (sidenote: My younger sister’s name is Sharon, and we both used to be blond as could be and have the bowl cut. endless comparisons.) Pollyanna is one of my long-time favourites, so it was fun to see that again.

I’ve been Roguing away, working on the pocket. I keep having to frog it, after not matching up my decreases. Roar. Third time had better be the charm.

Also, has anyone else had trouble with the hem facing? It’s a twisted stockinette stitch, and my understanding was that it shouldn’t curl. However, mine’s rolled up about as tightly as could be. Any ideas how to mitigate this? I really like the way it looks flat, it just won’t stay that way: 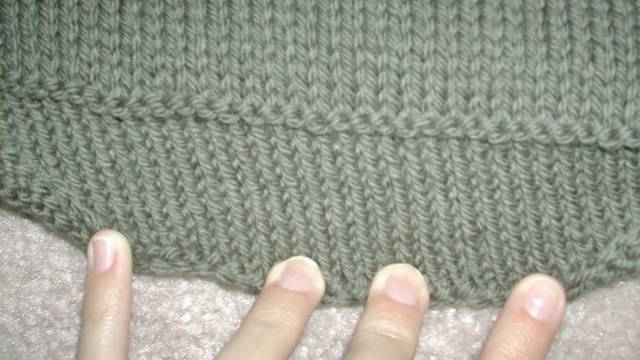 One thought on “Oh, they rock.”