Last Monday night, we drove down to SeaTac to buy a 55 gallon tank, a stand, and a hood with lights and a heater from a guy who listed on Craigslist. We paid $200, which felt like a pretty good deal. Due to a certain baseball team, among other things, we hadn’t gotten around to cleaning everything off and testing the setup for leaks. After a suspenseful 14 innings tonight, we finally got the salt off of everything and started putting water in. Kevin manned the bucket: 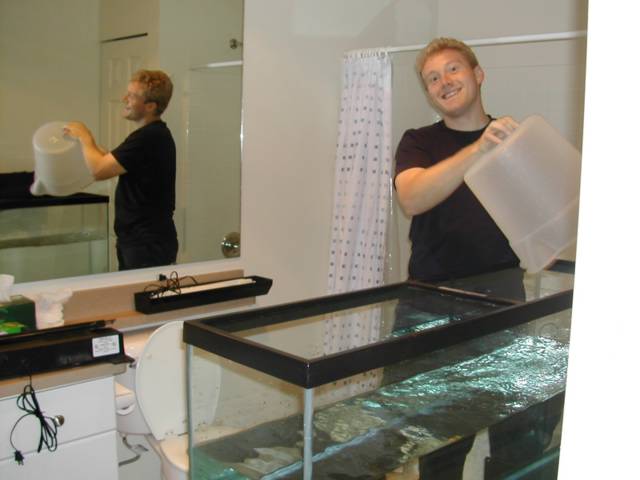 I mostly manned the sponge. Ahh, the glory. 🙂 We were both having fun just watching the tank half full of water. Fish may be too much excitement for us. 🙂 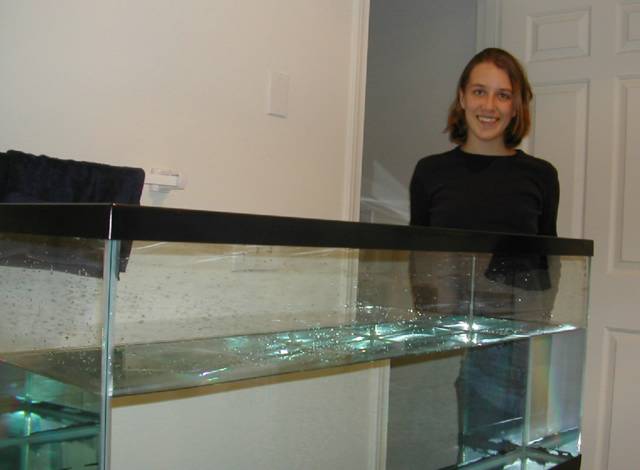 We also finally found a way to clean out the protein filter. Apparently running it with a 3-1 water/vinegar mix is supposed to be safe and effective. Kevin got it all set up and running, and after admiring it for a while, we’ve left it to do its work overnight. We have a slight dilemma with the skimmer because it’s about an inch too tall to fit in the stand. For a while we were going to put it behind the tank, but it sits in a sump that needs about a foot of clearance. Now I suppose it will have to go next to, but I’m not happy about either the sight or sound of it… We’ll keep thinking — maybe we should just find a cabinet for it?