I’m back in Seattle after a long weekend home in Weston.

(and back from a second trip to the airport this afternoon to retrieve my wayward luggage! my bag had my knit sweaters and the scarf Sharon gave me from Spain in it, I didn’t want to take chances with FedEx after my recent demonstrations of airport karma.)

Lots of news, which will probably get its own post after I go to the grocery store to restock the fridge, but before I go, I thought i’d quick post about my 5th-and-a-half year high school reunion.

Here’s the yearbook picture of the class of ’99 from 6 years ago when we were seniors: 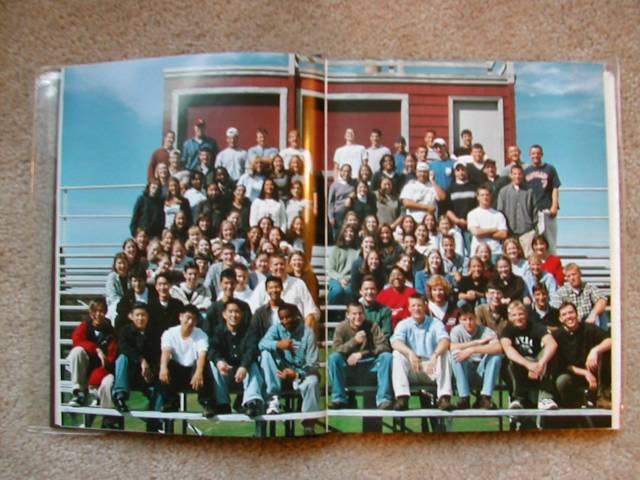 (I had to get my yearbook out to reminisce before heading home.)

We met in Boston at Felt (some club on Washington St, pretty good even if their DJ didn’t have Living on a Prayer). I have to say that I haven’t done a great job keeping in touch with people — I mean to, but I think it’s kind of hard to slip into my high school self sometimes, and hard to tell what’s changed and what hasn’t in other people. If I’d been there for the changes keeping up would be easier, but as is for most people all I have is semi-recent batches of single sentence updates that I got when my mom ran into someone else’s mom at the grocery store. So, that said, it was fun to see people and hear what they’re up to, and realize how long ago high school was. I don’t think that there will be any official record, so here’s my utterly unofficial record of the thing, filtered through the open bar (and still in single sentences, max):

Tara is in New Haven, at Yale, and hasn’t lost one bit of her smile. Mike Allain, I talked to too late in the night once we were both past the point of doing the resume bit — all i have is that he’s a friendly, cool kid. Lauren Balsbaugh was there but on the phone the only times I ran into her. Bill Barclay looks exactly like himself plus a goatee, is doing performance art sort of stuff and teaching. Selby is in Colorado? I think? David Bell didn’t come but I’ve heard a rumour that he’s married to “Rita” — don’t know if that one’s pure gossip or true. Shana looks amazing and is working w/ Austin for a tv channel in Boston. George the Sun God is working for a tiny software company in Cambridge but wishes he was still running a hut on Mt. Washington and getting to ski and ice climb all the time. Caroline Broderick was there, but I didn’t get to talk to her. Chad is in San Francisco and reads my blog at work! So double points to him. Lauren Carr, Kathryn Doherty, and Sarah Duggan, I barely saw, which was sad. Jared Chandler looks awesome, but was getting up to leave as I saw him so I don’t know what he’s up to. Dawn-Marie is working for 94.5 and ready to do something new. Jeff Coburn was there with his girlfriend. Patrick Doherty is in NY (I think?) and has some awesome financially-related job that he seems to like. Krissy Ewton accused herself of having a Barbie-look which wasn’t at all far off but in a good way. Bill Fagley has gotten even nicer and cooler than the last time I saw him, which is saying something, and getting his masters (I think?) in psych. Kate Ferguson was definitely there and then disappeared and I didn’t get to talk to her at all. Laura Fox is doing research on perception at MIT which just sounded cool. I talked to Shayna Garlisi (while she was talking to Mrs. Igoe) but didn’t get to hear at all what she was up to. Lauren Gibbons is in philly doing psych research and applying to grad schools. Evan Hoffman is nearly unrecognizable if you haven’t seen him since high school. I didn’t get to talk to Sarah JD except to thank her for friendstering me. 😛 I could have sworn that I saw Aya right at the beginning but then she was gone by the time I got to her, so that’s a mystery. Katie Kelly has a sleek haircut and no one recognized her at first. Liesel is living in a safer building than her first one outside DC, and looks great. Jess is doing some sort of Art/Architechture masters at Christie’s in NYC and her boyfriend is in DC. Amelia is in NYC still, and utterly looks it. Carrie Neill said hi to me with such a big smile, but then too much open bar for the two of us later we didn’t get caught up. Jeffries is in his second year of Harvard Law, and I personally think that he should choose intellectual property as his specialization. Kristine is working at MGH and might come to school in Seattle for her masters — I have my fingers so crossed. JP Parker, who grabbed my boyfriend’s crotch while getting kicked out of a bar the last time I ran into him, was there, but I didn’t find out what he’s up to other than hanging out w/ Chad. Sara Peterson had opened a restaurant in Amherst, MA, but her partners were bad news and so now she’s on to something else. Kerry Purcell is a journalist for the Boston Herald and living in Boston. Alexis Romanow was definitely there, but by the time we were in the same group, she was on the opposite side and I couldn’t hear her over the music. Caitlin Rothstein was getting everyone to try Budweiser’s new energy drink. Steven Sahlman was there early, but left before I talked to him. Jack Sallay is working for the publishers Simon & Schuster in NYC. Meg is producing a play off-Broadway but I can’t tell you the name of it because it would be bad luck. I spent an age talking to Danielle but it was about everyone else, so I hardly have anything to report on her. I think that Julie Shapiro was there, but she was another one that I didn’t get around to, along with Jill Simon and Wendy. Andy Starr’s living in Somerville (along with half the class, it seems) and dating Angela McMahon, and we talked about the Red Sox. I saw Mari and her eyes are still amazing. Dan Whittenberger was there at the very beginning and we said hi. Connor Wilson is working in Wesleyan’s fundraising office and assistant coaching lacrosse. Justin Woodside is still his smiley self, but I didn’t get to talk to him beyond a wave. Kevin Wright looks exactly like himself except older. And Trish did an awesome job being the organizer, especially after Fran’s Army training meant that he wouldn’t be there.

Whew. And it’s entirely possible that I missed people, since I really just stood in one place and talked to people as they walked by. I wished that Peter and PGW had been there, along with Stush, Sarah Doherty, Alyssa, Sarah McNeer, John Kushner, Sam, and the others that I haven’t seen from our class in years and have been curious how they are doing. :-/

Whew, long post, but this gang’s worth a mention. 🙂