We went to the fish store (perhaps with an ulterior motive) to pick up more salt, and came home with a new Torch Coral. The people at the store said that they’ve heard of clowns hosting in them before — we’re not holding our breath, since the clowns like smooth surfaces and ignore everything in the tank that’s a natural surface. I’d still like to get an anemone, though they’d probably ignore it, too, but we’d have to upgrade our lights and that isn’t really in the immediate future plans. The torch coral is neat, though. The ends have a glowing yellow ball that’s sticky to grab food, and it loves high circulation. Ours also has a handful of barnacles, which are about the coolest things in the world to watch — I had no idea. They’re very delicate and so I couldn’t get a picture, but maybe someday.

The gramma hid as usual when we were placing the new coral, and seemed quite put off by it when he emerged. He just stared at it for a good two minutes before accepting things and resuming normal activities. The clowns, as expected, have completely ignored it. 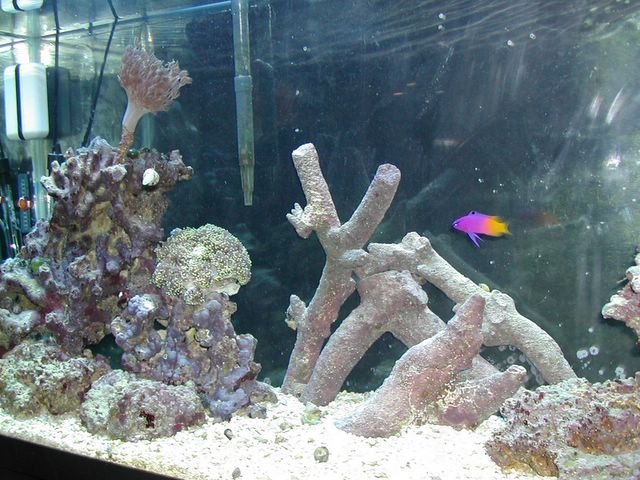 It took a while to get the current right. Here, it’s too strong over the top and so the coral retreated. The three branches in the front are out and happy: 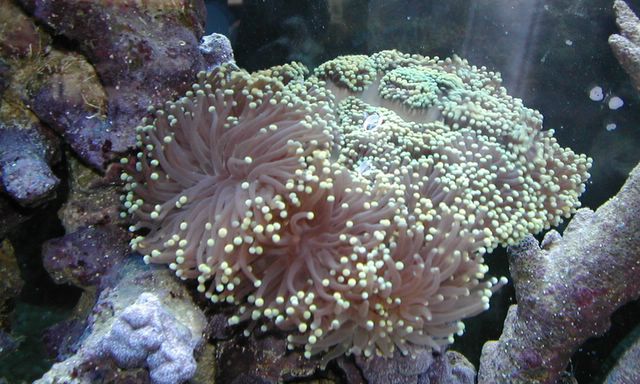 Especially with the new coral’s need for more circulation, we decided to move the xenia over and down, so that it would crawl off it’s little pedestal of a rock onto our live rock. That way, it could have a sheltered spot, be close to the light, and look a little less temporary. It also didn’t look so comfortable perched on top of it’s little rock. It curled all up when it was moved, so here’s a fun before and after:

When curled up, all of the fingers writhe, so it’s very Medusa-ish.