This has been a rocky week on the fish front. We’ve nearly given up on ever finding our small yellow tang (even though the fish store has 8 larger ones, it seems better to wait — they little ones are so neat and are supposed to adapt better), and Kevin’s been lusting after the firefish that they’ve had recently. Only problem was that there wasn’t much information out there, and the little that was there was pretty conflicting. We knew that they needed about 20 gallons per fish, that they’re jumpers, and that they are supposed to be extremely shy (odd because they weren’t at all at the store), but other than that, reports conflicted. After reading up on Fenner, it seemed that the best option was to get a group of three. On the way home and in the settling-in period in the quarantine tank, everything seemed just fine. However, while we were both at work the next day, all hell broke lose and the dominant fish bullied the other two to death. We leapt in and isolated him in a colander floated in the top of the tank when it became clear what was happening, but by that point it was too late and the damage had been done. So, now we have one firefish. We both feel terrible, because we do want to be conscientious and we felt like we’d done our research beforehand. Lesson learned (be skeptical of what you read), and hopefully others will at least be forewarned by our sad tale. Meanwhile, the “bully” fish seems to be doing well, and we’ve forgiven him for his transgressions. 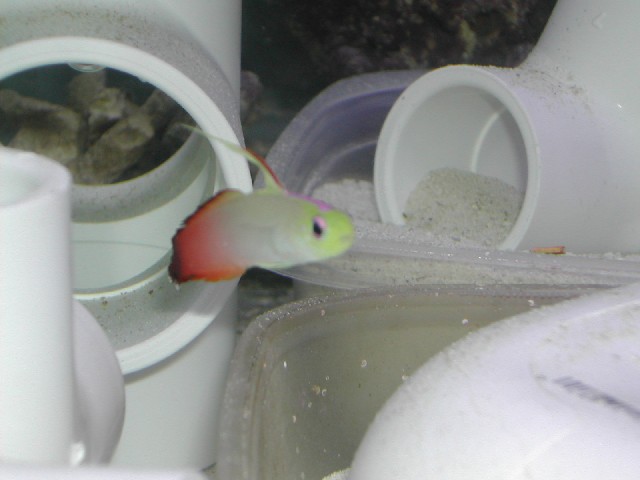