After a great weekend replete with movie, beach and deck time, I settled down to “work” on Monday with the washed and ironed quilt fabrics and the mat and cutter. The circular cutter took a while to get used to. I finally figured out that I had much better control when I stopped holding it like an x-acto (hand over the top, cutter at a 45 degree angle), and starting holding it vertically with my hand on the side (rather the way you would if you were stabbing with a knife – sorry for the graphic analogy :-P). I also didn’t realize until I was 8 colors in that cutting one way is much stretchier than the other way. I get confused if it’s with the selvage or against (I don’t have my lingo down yet), but things went much quicker when I started cutting parallel to the woven edge. My fabric was pretty neatly divided between fat quarters and 1/8 of a yard cuts, and so some of the cuts won’t be long enough for the 10″ strips that I’ll need for the outer edges of the squares, but I should be able to fake something together for those. 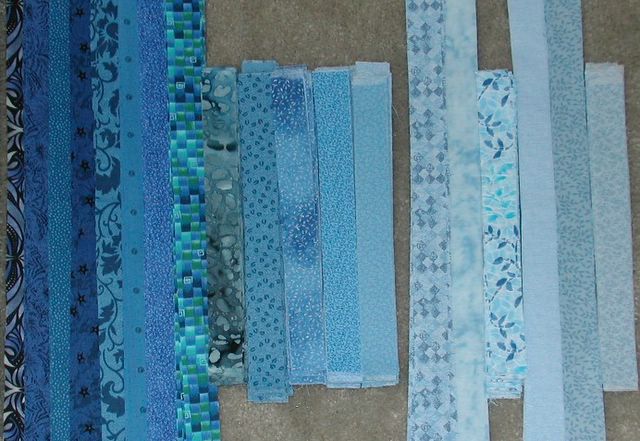 I finished all of the blues and purples, which felt like major progress. I only have greens left to cut at this point, though I think I’m going to need more fabric – more greens, some yellow for the sky where it meets the mountains, and a different color purple – one of the colors is too yellow, and needs to be redder or else it won’t progress properly (see the half line in the picture below). I was worried about it when I bought it, but after cutting it became too clear that it was a completely different color family. 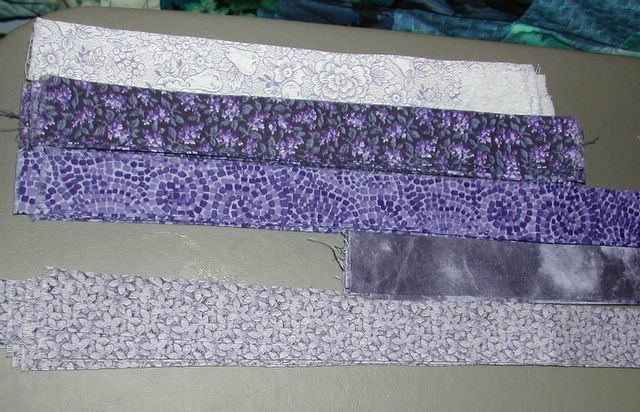