Yesterday, with the help of a wonderful librivox recording of A Little Princess (one of my childhood — and for that matter, adulthood — favourites), I went on a pillow-making spree. A bit ago, Kevin moved all of his computer and tech stuff downstairs and we moved the futon upstairs, and I made it as far as buying some bar stools to covert into ottomans, painting them, and draping quarter yard cuts of fabric all over everywhere before the holidays hit and I lost momentum. On Thursday night, I finally took the sewing machine back out and started working again. I finished the full set of pillows at the beginning of the final chapter. Perfect timing.

There are two kinds of pillows: two round ones for atop the stool-ottomans, and two square ones for the futon. My major objectives in making these were (1) arts and crafts project! (2) to make the ottomans more comfortable, and (3) to tie together the different/clashing-blues butterfly chairs and futon cover. I also have a lovely throw on the futon which is different shades of periwinkle, and I wanted to play off that.

Unfortunately (keep this in mind as you view the pictures), my camera just can’t deal with that purple-blue periwinkle color, so it looks like I am a color-blind mess. It’s such a pity, because they turned out so well, but the pictures just didn’t come out. I’m sure the fact that the flash was required (even in daylight! Seattle winters are wearing on me.) doesn’t help, but you’ll have to imagine that everything goes. Here’s the view of the futon: 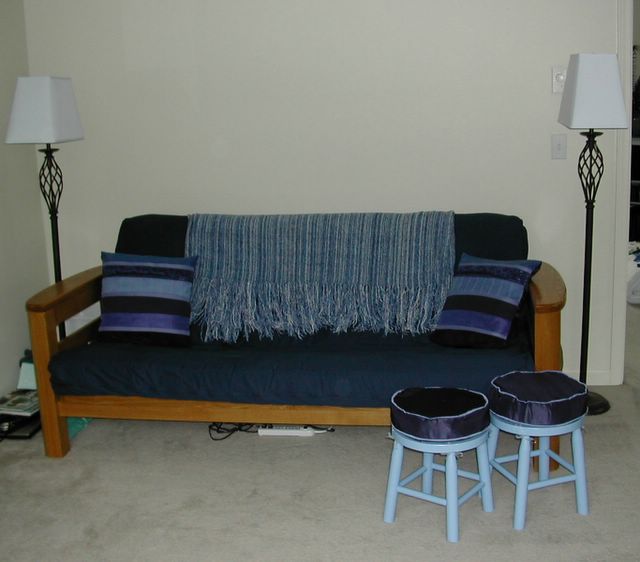 (Keep in mind that the stool legs should match the piping, and the pillows perfectly pick up the different periwinkles in the throw.)

For the square pillows, I used the striping pattern from Crate and Barrel’s Brighton Pillows. I’m thrilled with the way they turned out, and Kevin’s been raving about how you can’t buy anything this nice in stores (:-) !!), so they were an unqualified success. 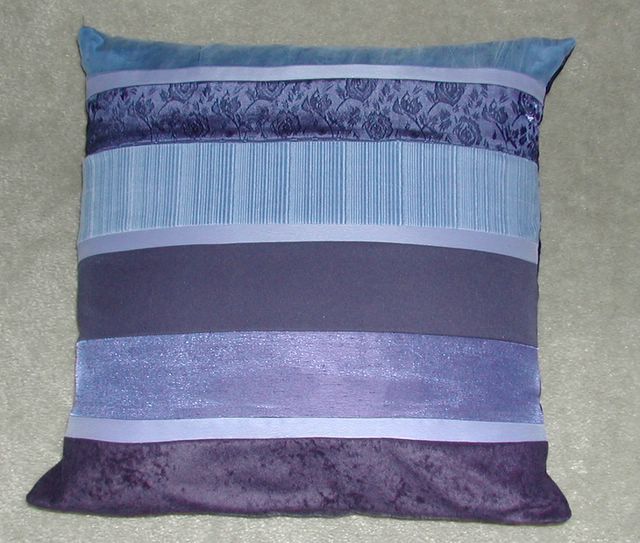 I used a pretty wide range of fabrics, including silk and corduroy. If I had to choose fabrics again, the corduroy probably wouldn’t have made it in, but the color and texture at least match the throw perfectly. Many of the fabrics were very slippery, so the seams were reasonably time intensive due to all of the pins needed.

The round pillows are far less professional looking. I made my own piping, out of the shiny periwinkle fabric that I used for the slim stripes in the square pillows. I then tried to cut foam to match the top of the stools. (Cutting 2.5″ foam into a perfect circle is so hard!! I have no idea how you’re supposed to do it, and my attempts were pretty ugly.) Then I cut fabric to make a short cylinder of a pillow, with a slit in the back to put the foam in. This was really hard to do without making the fabric bunch, and I spent as much ripping back as I did pinning and sewing. Once the covers were all assembled, I used the *so* cool automatic buttonhole maker attachment for my sewing machine to make four pairs of button holes in the bottom of each cushion, and threaded 1/4″ organza ribbon through them to make ties to hold the cushions on to the chair.

The end result is definitely homemade, not the crisp loveliness of my mind’s eye, but they’re functional and colorful. 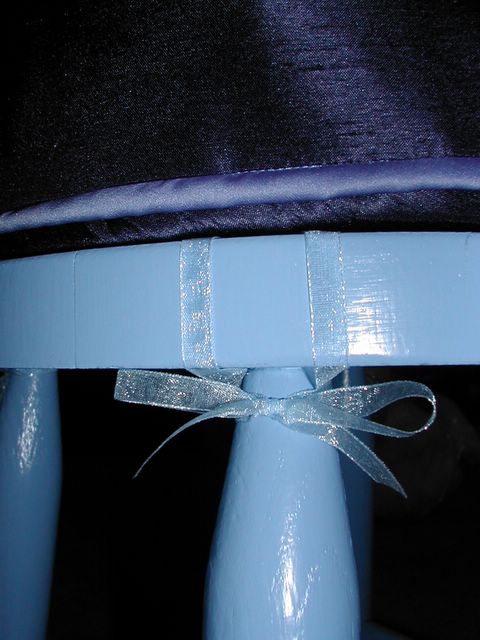 (again, remember that the piping and paint are in reality a perfect match, not the grisly aqua and purple shown above. eek.)

I feel so accomplished. 🙂 On to the next project!