I’ve had a bunch of old projects that seem to just sort of be lingering, and now that I have a bunch of new things on the horizon, I’ve set myself to the task of finishing the older ones first. First up is the twist front top. I’m an expert in the lace pattern (finally lace that I can knit while reading!! Sweet!), but seriously mangled the decreases for the twist over the bust. 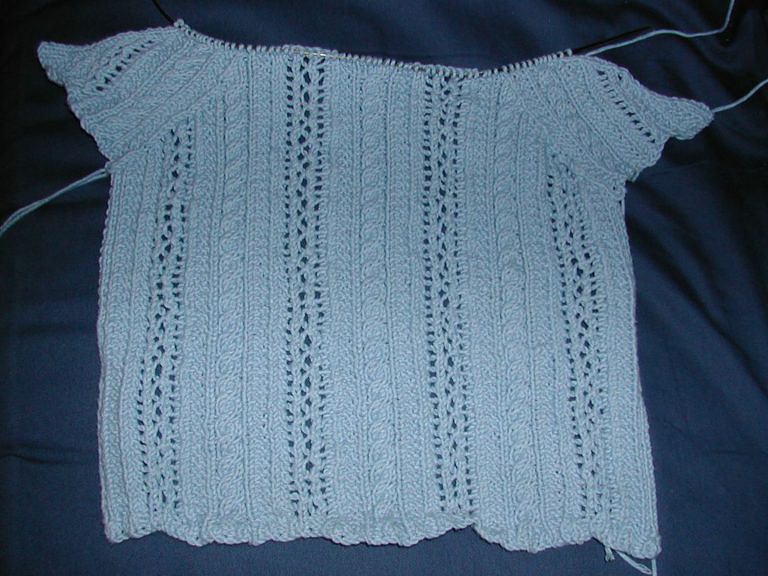 The top part got narrow way too fast, and everything looked messy. So, despite the fact that it had literally taken me weeks, I ripped out the entire section on the bias and started from scratch.

I’m still not sure how much it gained me. My gauge is dead on, but the measurements in the pattern do not match the ones I’m getting, and I’m pretty sure that there’s an error in the pattern for the size I’m knitting. Very frustrating. I tried to do the math out on my own, but the combination of the row gauge over the diagonal perplexed me. When it wasn’t looking right a third of the way in *again*, I started decreasing according to my own pattern (always on the bias line, instead of 3 out of every 4 rows, and one out of four on the edge instead of every right side, plus a few random ones thrown in for correction). The end result is definitely “good enough”, though there is a bit of a pucker. Generally, I would say that it’s completely blockable, but this yarn is cheap cheap, and thus about 85% acrylic. This project may end up being ill-fated… I’ll have to see when I sew it up. 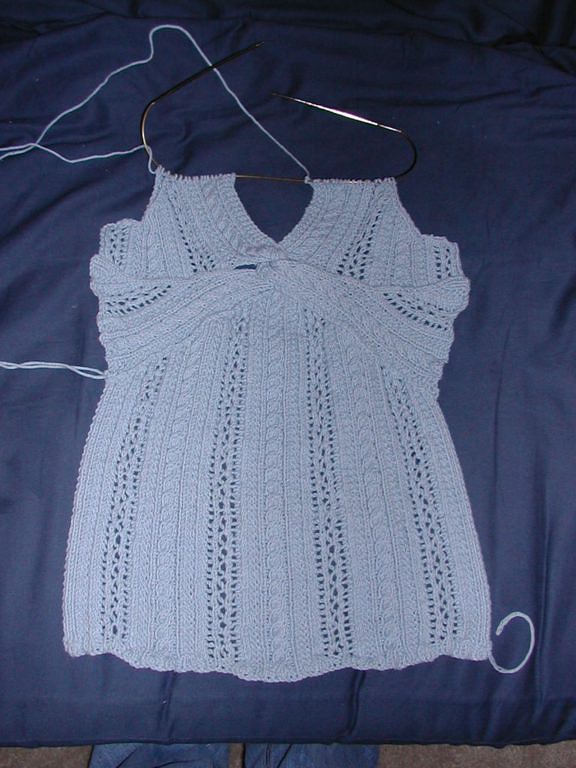 I was hoping to finish the front before leaving for vacation, but didn’t quite make it. Now that I’m looking at it, though, I think I may also add side panels. Again, my gauge is dead on (as far as I can tell, though gauge vs. lace confuses me a bit), but the tank is quite narrow. I think it would fit better and I’d be happier wearing it if it wasn’t so tight. It wouldn’t take too long to knit up a cable panel for each side… and then, maybe it could be a coverup top for the beach on the honeymoon? 🙂 Wishful thinking, but maybe.