What a fun week! I had to win in order to tie for 5th and make the playoffs, and my team pulled it together for a 92-57 match. So now I get a playoff spot. How cool!

Marion Barber continues to make me happy, and I was afraid that after last week’s 22 points, Shaun Alexander would boomerang much lower than he did. I’d picked up Reche Caldwell in place of Reggie Williams, and he was strong. Poor LJ Smith didn’t do much, but by that point it didn’t matter, and it was such fun to see the Eagles win Monday Night Football regardless of whether they threw to him. Luckily, I had Maroney on the bench, but I hope he gets well soon. Elam continues to do well, but now he has a hamstring injury. I’ve picked up Dave Rayner (the Green Bay kicker) in case it’s looking like he won’t play this week. I probably should have dropped Seneca Wallace for him now that Hasselbeck is healthy and starting, but I love Wallace so I dropped my backup tight end instead. This means that LJ Smith needs to come through with points this weekend.) And the Seahawks D outscored the Patriots this week. Crazy!!

We’ve been having technical problems that have cut into my football viewing. Kevin has a digital antenna, so we’ve been watching and recording games all season using his computer and his new(ish) widescreen tv. (not flat panel, to his chagrin. The common sense side of his brain won out over the usually dominant gadget side.) We even cancelled our cable, since we get the networks in high def. Then, his motherboard went on the fritz, so he sent it back right before Thanksgiving and we’ve been watching football through the flurries without recording since. I never thought that I’d be this invested in my ability to (a) watch football (b) on a fancy tv, but I’ve completely joined the dark side on both points, I’m afraid. (For balance, it should be noted that the same issue is affecting my Grey’s Anatomy viewing as well.) Kevin just got word that they’re shipping the new board back now, so with luck everything will be up and running in time for Sunday’s matchups.

And, since I try not to post without pictures, here’s the Christmas mantle: 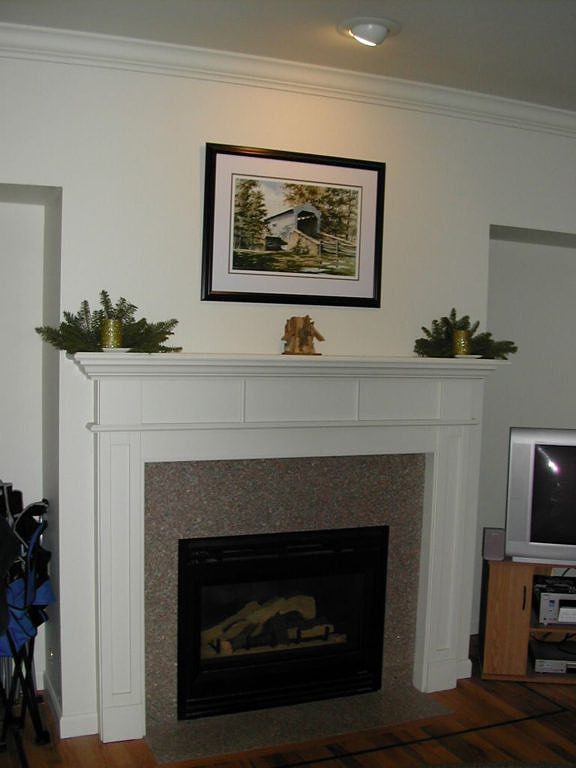 I’d gotten the sparkly candles a while ago because I thought they’d look nice with the painting, but adding the dark greens for contrast takes it to a new level — so pretty. Between this, the tree and our monster snails in the fishtank, I’ve been spending way more time than usual in the living room. 🙂