This is mostly a pictures post… just to show the storm pre- and aftermath.

I tend to take tank photos a few times a week. I was so happy to realize that I took some on Thursday right before the power outage, even if they didn’t come out so well.

One of the most shocking transformations was the death of all of the horrible red algae. It covered the lower third of the tank, prestorm. Here you can see the gramma’s rock (not the best picture, but it does have the tang in it): 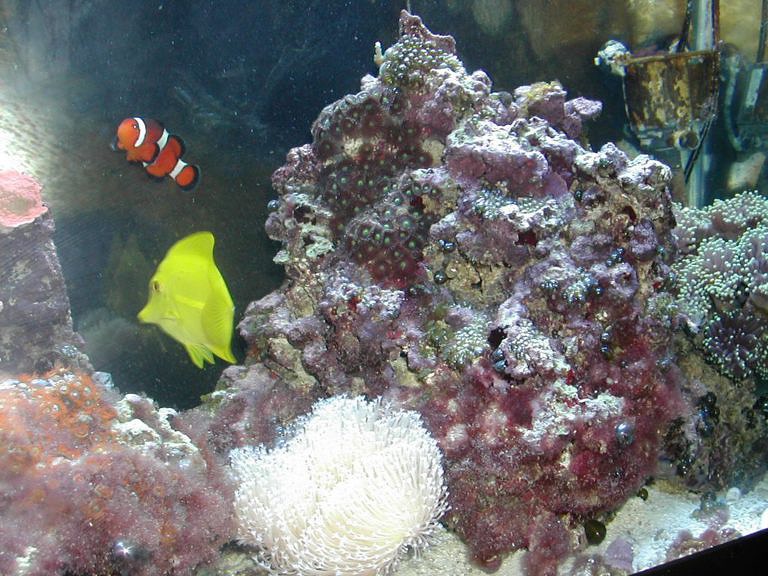 Whereas afterwards, there are only a few clumps on the ricordia rock and the gramma’s rock left. When we turned the lights back on, it had mostly changed from a maroon color to screaming orange. Then over the next day or so, it all turned from orange to clear and disappeared. Good riddance — lets hope it stays gone. 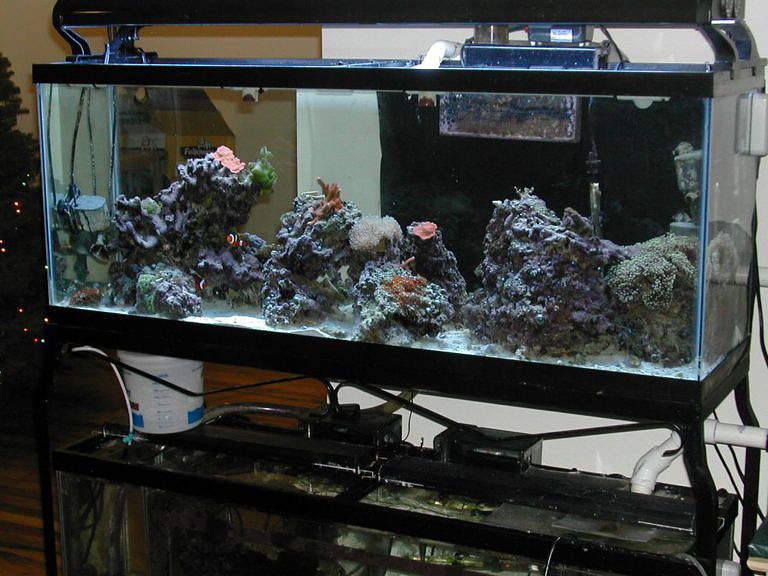 The tank actually looks shockingly similar, pre- (below) and post- (above) storm. The major difference at a distance is that the xenias are gone, as are the gramma, tang and shrimp. You can see the pom pom xenia on the far left of the tank — it looks like a large pink ball. The other (original) xenias are the blurry fuzz all along the ridge line. 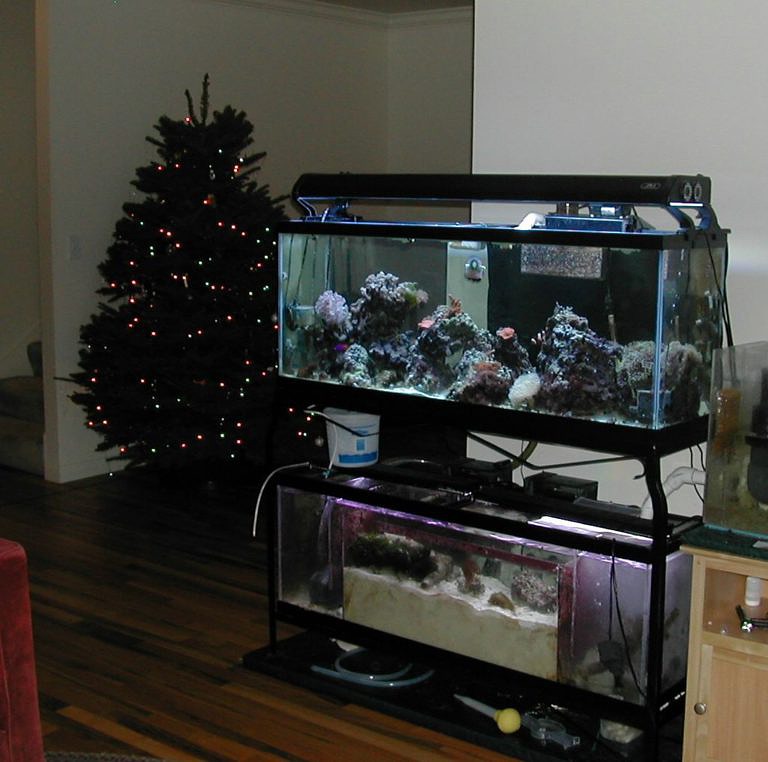 The rest of the corals did pretty well. Here you can see our yellow plate coral (a montipora) with attendant hermit crab, and the pink branching montipora. Both look great. In the back to the left, you can see the top of the leather. One of our jets died and he looked miserable without the extra flow, so I raised him up in the tank closer to the light and with good current, and he perked up. 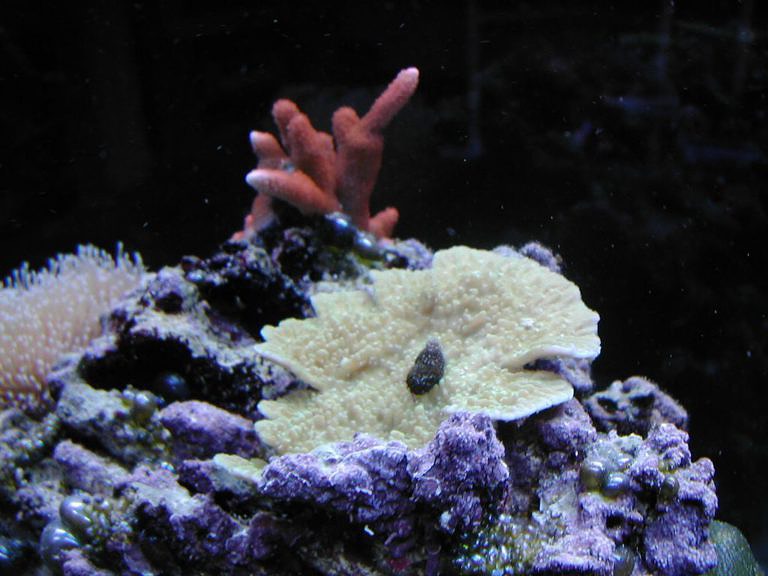 And then the same corals, but taken from the front of the tank. You can also see a part of our pink plate corals, as well as a limb of the monti that I accidentally snapped off a few months ago, that’s still happily growing in its new spot on the lower rock. Also, some of our orange zoos: 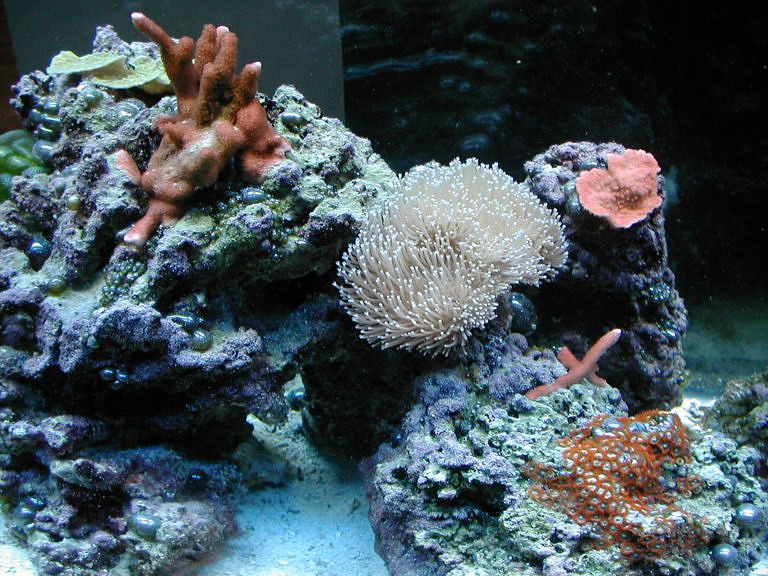 Our torch coral (and embedded barnacles) made it through without too many problems, which was a relief. It definitely didn’t like the cold, and pulled in all of it’s waving arms completely, but once the heat and lights came on, it was one of the first corals to look normal. They’re supposed to be particularly able to take down a tank if they die, so I was glad that this guy was more-or-less unphased by the ordeal. 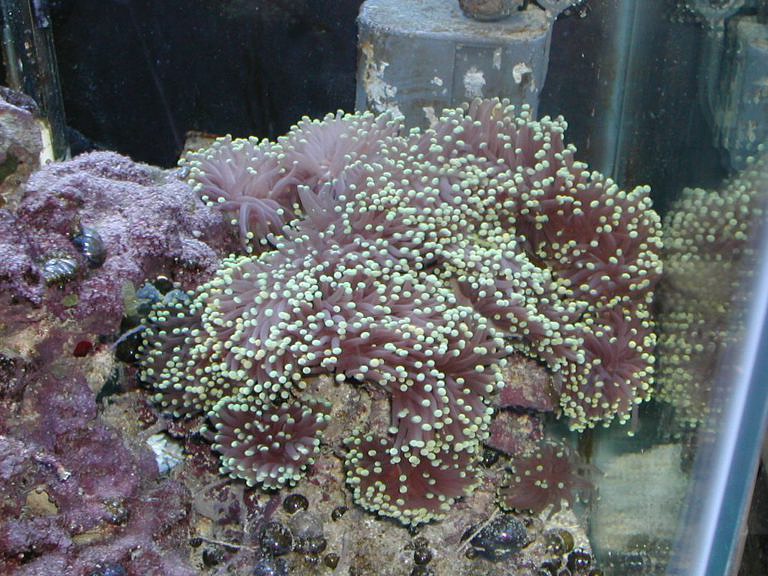 The bottom third, or so, of the acro bleached. Very sad because it’s really taken off in the last month or so. I’m hopeful that once it gets over the shock, it will grow back. The brown parts are the “mouths” which feed off of organisms in the water, and it’s also very dependent on light, current, and good water quality.

Since the power outage, there’s been a dark algae growing on the dying parts of the acro. The teeny hermit crabs (who seemed to survive! Yay!) are so obsessed with it. There tend to be one or two in the acro branches at all times, munching away. In the picture to the right, you can see one, in its white shell, trucking towards the bounty. The zoanthids that it climbed up are deeply (and momentarily) unhappy. Instead of the open faces with fringe, they close up into pale purple tubes until the annoyance has passed.
And finally the ricordia rock. When the lights first came back on, both ricordias were stringy and losing their grip on the rock. They came back to 90% very quickly, but still aren’t quite as puffy as they were before the storm. We’ve been playing with flow, since I suspect that more would help them, and waiting and seeing. The sunflower and orange zoos on the rock were just fine. This is one of the two places in the tank that still has red algae. Not pretty. And you can see the top of Clack, hanging out in his cave behind this rock. 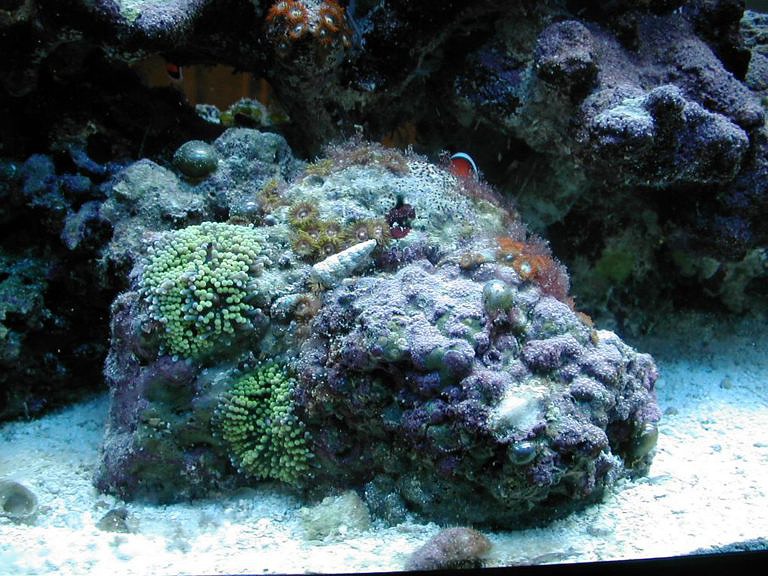