While I’ve always considered myself an unusually structure-happy person, time management in the conventional sense isn’t really my thing. Master of procrastination, to put a positive spin on things. I run five minutes past fashionably late, I post in batches every two weeks, and I hate going to bed because I feel like I’ve squandered the evening. In some ways Kevin is the opposite. He likes getting up and being busy all Saturday morning so that he can relax in the afternoon, he likes leaving the house when he says he will, and he’s probably the most efficient worker I’ve ever seen. On the flip side, a list of 15 things can take him an hour and a half at the grocery store, and he’s more into the “season” of important days than the date itself. So perhaps it’s not surprising that we didn’t open each others’ Christmas gifts until Febrary third…

Part of it is that we didn’t celebrate at home, and we’d make a conscious decision early on to celebrate when we got back, rather than lugging, security-checking, and flying gifts to Florida and back. Then Kevin was busy at work, then we were wedding planning, then I sprained my wrist and couldn’t finish cutting out the pieces of his homemade gift book, and all of a sudden, January was gone. Kevin was at work all day on Saturday, and since I was in need of a project, feeling guilty about the delay, and realized that we were straddling Christmas and Valentines day, I decided to sew him a gift pouch rather than wrapping.

I bought this fabric a year ago — red with fireflies and a gorgeous white and taupe speckled pattern. I used pink thread to sew it and gold embroidery floss to tie it, as a nod to the holiday-straddling. 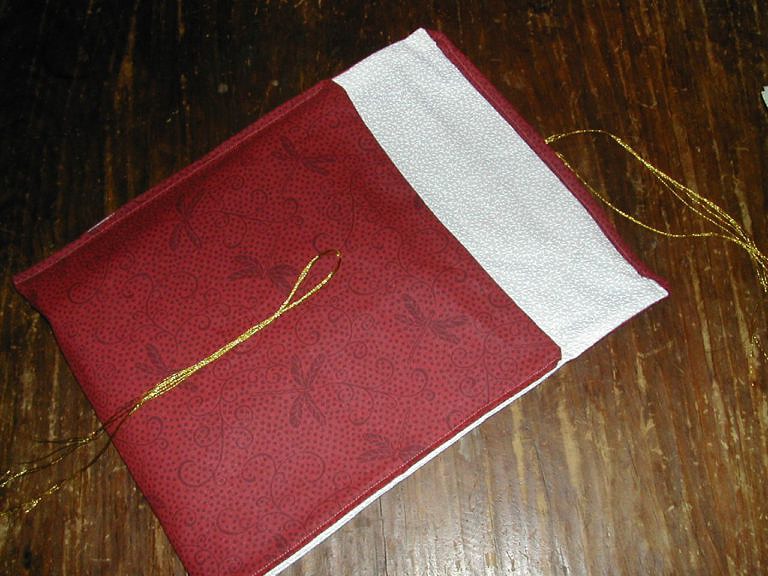 And here it is tied up: 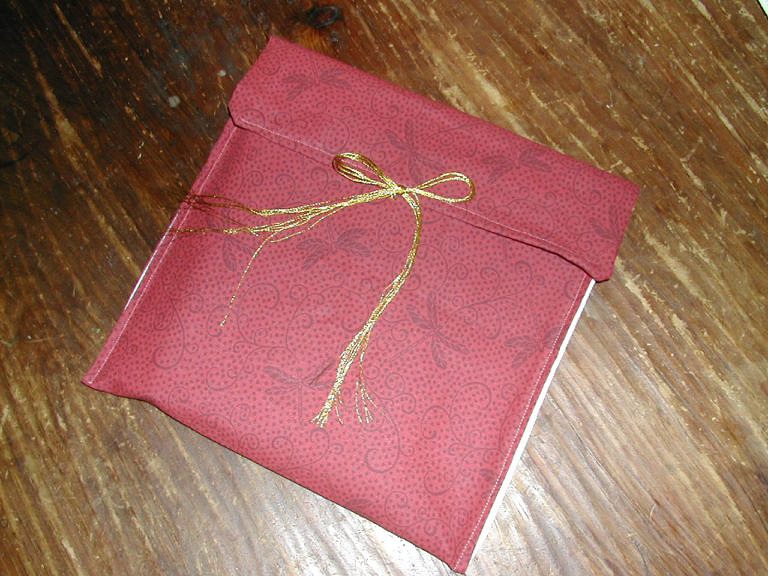 It took all of 10 minutes to make, including winding the bobbin and sewing in the ends. I placed the two fabrics right-side-together, and cut so that there was 3/4″ on each side of the book, and so that the fabric was a little under 2.5 book-lengths long. I ironed both pieces. Then, holding them right sides together, I sewed a U down the long right side, across the bottom, and up the long left side. Cut thread, turned rightside out and pressed the edges with my fingers. I folded the top edge like wrapping paper (corners folded in as small triangles, rolled the edge around twice) and I seamed that. Then I folded the bottom edge up to make a big enough pocket for the book, and seamed both long edges. I like that you can see the white lining on the side seams. It looks so pretty and polished.

For finishing, you’ll have six ends to weave in — pull or sew the thread to the same side, knot, and sew the ends in between the layers. Fold the bag in half horizontally, and sew in ties (embroidery thread? Fine ribbon? A snap? A button and elastic?) at the crease.

One thought on “A crafty present pouch”