I’ve been totally gardening obsessed recently. Last summer, I sort of petered out, because I hoped we would buy a house and then I’d have a real yard to play with, and herb, vegetable and flower gardens galore. Assorted things (mostly timing with the wedding, really) have put a crimp in the house plans, so we’re still renting. I love our apartment, so it’s kind of hard to mind, but given that the front deck only gets 3 hours of morning light and the back gets the same in the afternoon, it makes gardening feel a little more challenging. Since my parents were coming, though, I decided to take the mini daffodils out of the big planter and put them in their own pot, and redo the spaces in the front planter. 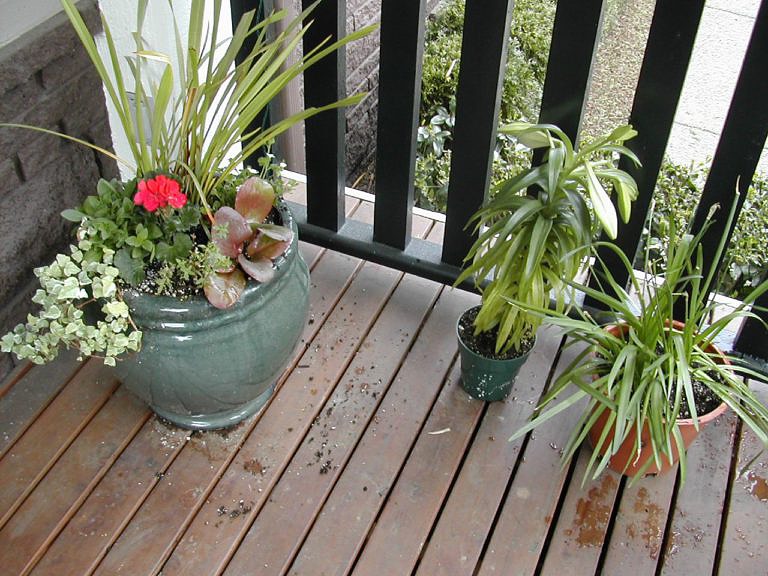 The tall plant in the back is the evergreen Phormium Tenax (also called New Zealand Flax), which has been acting pathetic over the winter. I think it needs more light. More water makes it look even more dreadful, so I’ve been trying to dry it out. I planted a bright red geranium in the middle, and then in clockwise order around the outside, there’s (new) bacopa, Elephant Ears (another evergreen, and still here from when I originally did the planter), the red snapdragons from last summer, some sort of variegated ivy that I’ve long lost the name of (another original), and new white impatiens that haven’t flowered yet.

Moving to the next pot, I also have a $4 Easter Lily — I bought it on sale after Easter Sunday, but it hadn’t bloomed yet. There are 7 blooms sitting there, and I love the smell. So wonderful. The bottom leaves are a bit yellow and pathetic, but I think that was mostly due to over watering at the store. I’ve moved it to the back porch now, in hopes that it will get better light.

The daffodils are the last pot. They’re all shaggy and floppy, but I don’t begrudge them the space — they’re so green.