I finally have pictures to post of my finished bedroom/office! Since the house has three bedrooms, Kevin and I each get our own room for the time being. Mine’s a smidge bigger, but we’re also using it as a guest room. When our parents or other family members come to visit, we’ve been giving them our bed and retreating to the futon or a mélange of couches. But now, since we have more space, it made sense to find a comfy daybed/trundle combination for the two of us.

In my mind’s eye, I’d been picturing a pretty, sturdy wood set like my parents had in New Hampshire, but they bought those almost a decade ago and either they were regional or no longer exist. After lots of wading through ugly, expensive options, both online and in stores, we decided to buy a Good Trading Company bed through a local wood furniture store (which, unfortunately, I can’t recommend. It’s been all delays, mistakes, and reorders.). The only catch was that in order to get matched head- and foot-boards (which seems to me to be a major style indicator of daybed as opposed to normal twin bed), we actually needed to buy bunk beds, since they don’t sell the components separately. It wasn’t too much more money than a twin bed, and it was way cheaper than custom furniture, so now we’re the (proud?) owners of two extra headboards and the accompanying connective pieces and hardware. The furniture turns out to be quite sturdy and lovely, and a decade or whenever from now, I’m sure we’ll be quite pleased not to have to buy any of this. Since it can either be constructed as bunk beds or two matching twin beds, they’ll certainly be used. And for now, the extra headboards, ladder, and parts can all just slumber in the garage.

So, on to pictures! Our mattresses were delivered in the first week, so here’s the room all blue-taped and with plastic down, ready for me to prime over the cartoon characters. 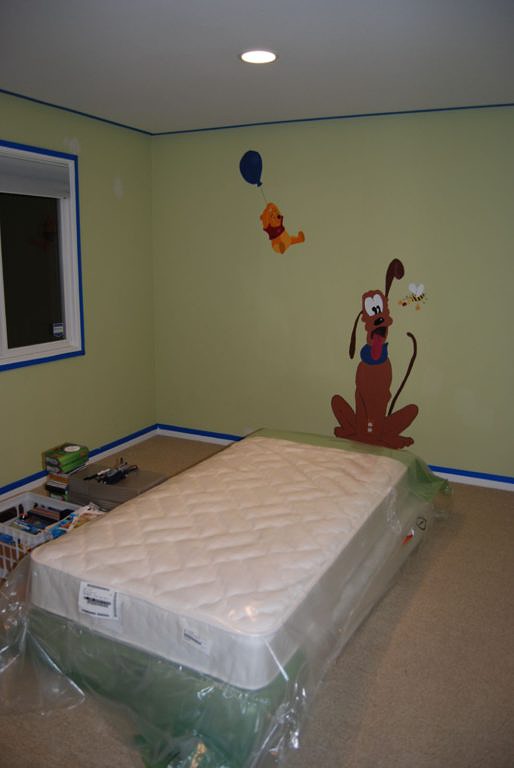 After two coats of primer, the disneyfication was blissfully removed. I was actually, surprisingly, a fan of the green, but the extra décor just didn’t suit me and it was amazing how soothing that coarse, flat, bright white was. 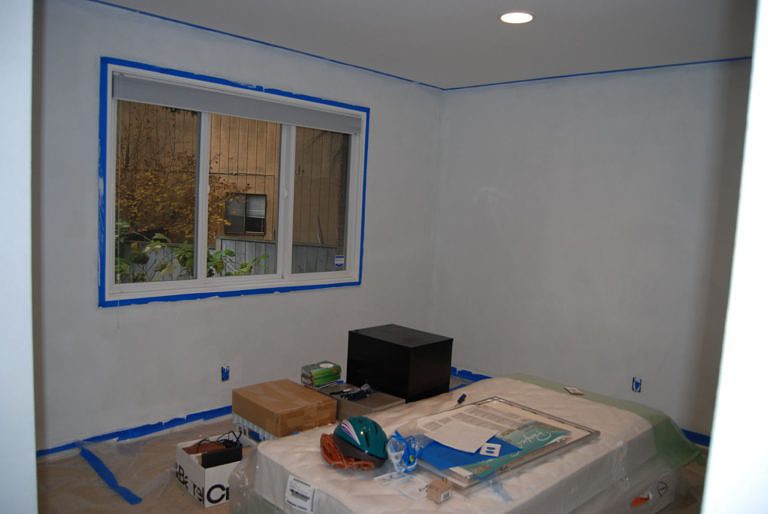 I painted the walls a light pink/mauve, which (three weeks later) continues to delight me when I walk in the room. The color is Behr’s Phantom Mist (720A-1) in a satin finish. The window faces north-east, and though there are two overhead lights, they’re currently the only illumination in the room. It’s relatively dark, and yet the new paint color seems to lighten things considerably. I also enjoy the contrast of the white baseboard, window and door trim with the pink. My room in middle school and high school had two pink walls, which I always loved, and this just seems like an improvement on the theme. It’s a pleasant room to be in.

Here are all of the day bed parts, unpacked and ready to be used. (We ordered two mattresses, but the trundle bed frame was ordered improperly and the correct pieces won’t show up until mid-December. Aggravating. Consider all of the bed pictures a work in progress. 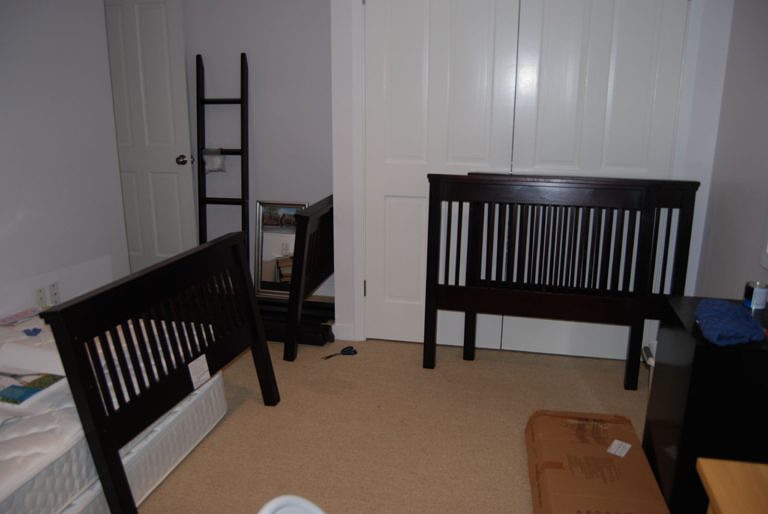 Once everything was in place, here’s the view of the room from the door. The 11’7”x10’ space holds the new daybed, three bookshelves (a la Target), and my desk. I’ve been thinking about adding a new second desk so that I can quilt and sew without having to move around the computer… 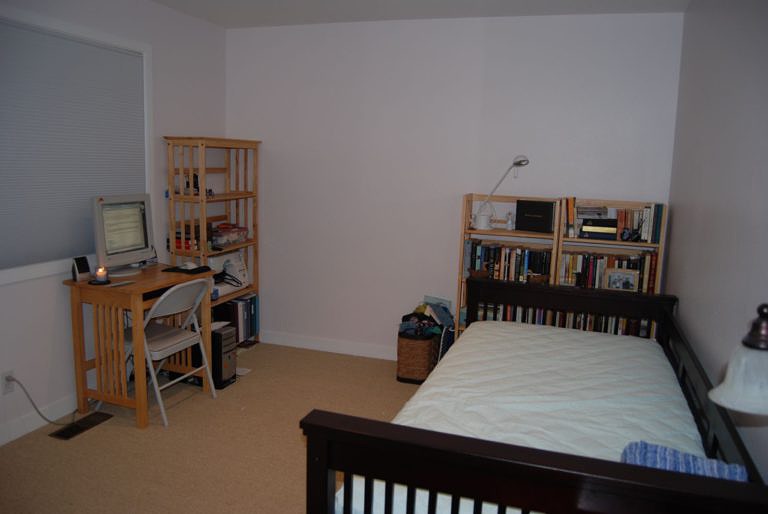 From the desk, here’s the view to the door. The room juts in a bit so that I’m almost entirely blocked from the hallway view. So far, the only art on the walls is the Birches painting that my grandparents gave me. So beautiful. 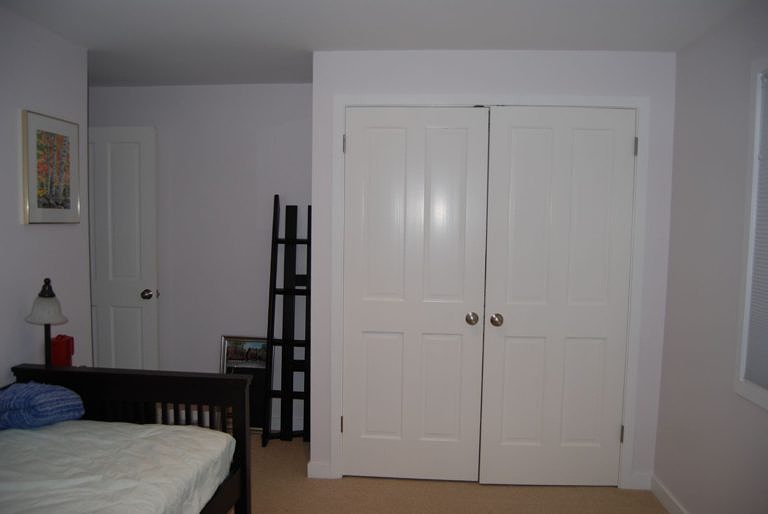 And with the closet doors opened… 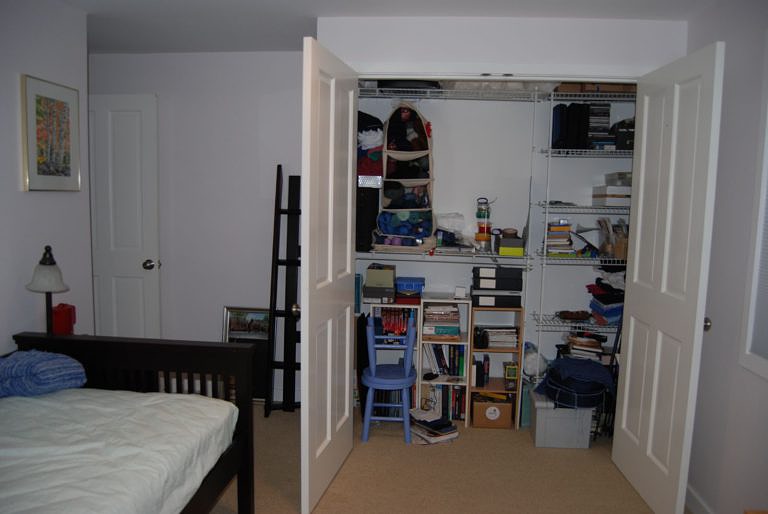 The closet is pretty awesome. The shelves can’t hold too much weight, but I have a few tiny fiberboard bookcases that packed in to hold the heavier things (mostly books and notes from college), and the rest is all crafts and ribbon and old CD cases. All of my elementary/middle/high school things went into three rubbermaid files that are now destined to live in the garage.