I’ve been wanting to post this for the last two weeks, and the weather keeps being crummy, and I can’t take pictures (either it pours, or there is NO light – those held hostage under the deep, dark Seattle clouds will understand). So pretend this was posted back on 12/27.

When we bought the house, I also bought a pruning book, read it, tried out a few things, and then gave up and decided to wait for better instruction. Kevin’s dad is an arborist, and both of his parents are gardeners, and so we and our yard have been waiting with high hopes for their visit. We weren’t disappointed. Our three fruit trees were massively pruned (and did they ever need it!), five pine trees and the half-rotten enormous leaf-producing monster tree outside the kitchen window were de-limbed, and our shrubs have been taken from unwieldy monsters into much more manageable creatures.

Kevin’s dad was impressed (to put it mildly) by all of our moss, but once he adjusted to see past it, it was a treat to watch him work. As gifts, his parents brought out a handsaw, many yards worth of screw-together poles, a saw attachment, and a neat little pulley-operated clipper attachment. In two full afternoons, we learned a lot about what to cut and how to go about it, but the best part was watching Kevin Sr. confront the branches on a tree. 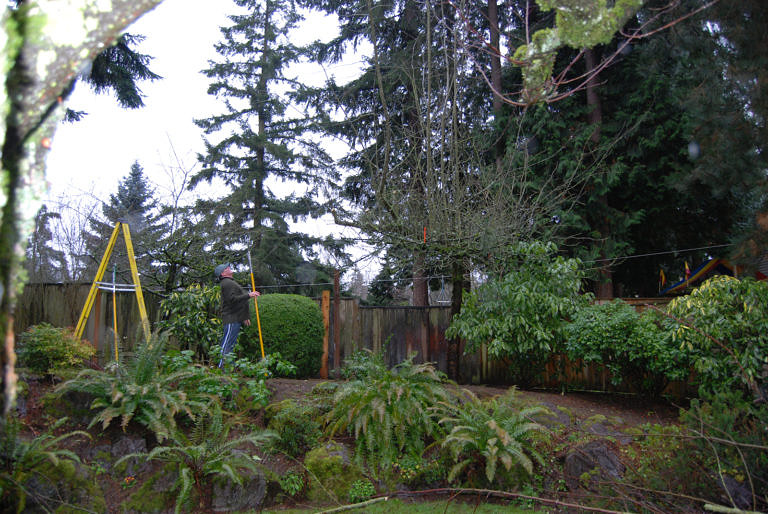 The tree on the side of the house, for example, stands in the 3 yards between our neighbor’s fence and our house, looming over the plate glass window and the kitchen garden window. (photo from early November) 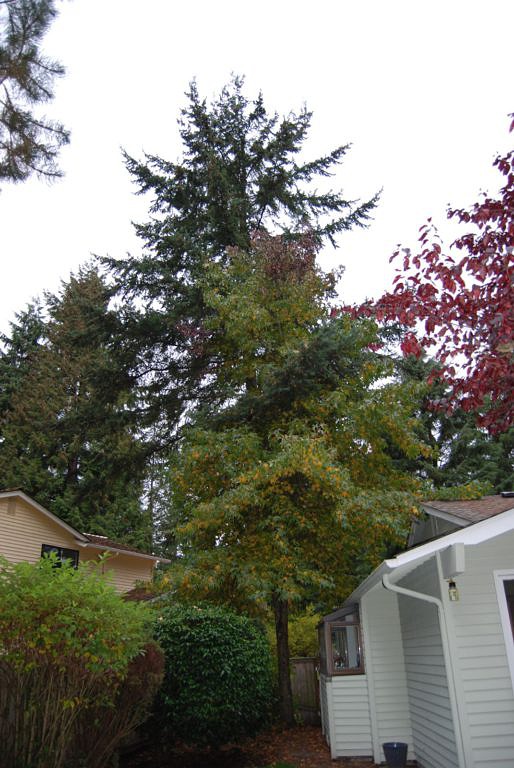 Working from a ladder and then from the room, he gradually took down about 2/3 of the tree, dropping all of the limbs down onto the same 2’ stretch of walkway. (after-photo from the opposite vantage point): 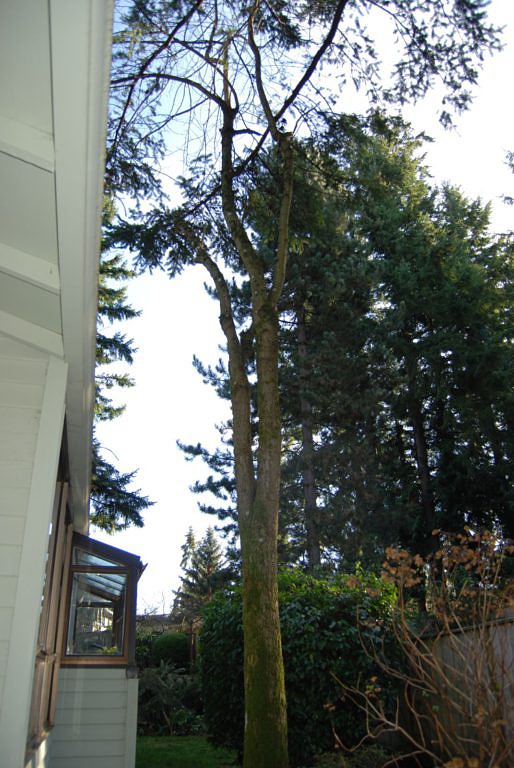 Same with the fruit trees – 20’ branches consistently avoided the two fences, the neighbours’ yards, and the squashable surrounding shrubs. 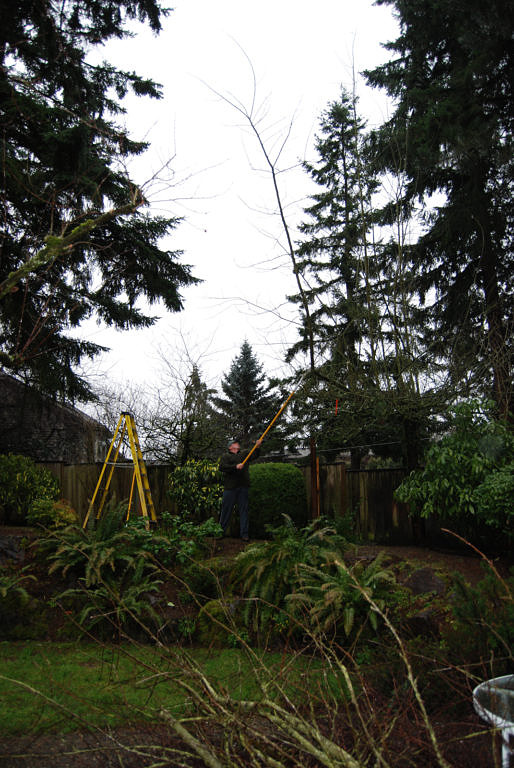 Kevin got to “raise the skirts” on the back five pine trees, though with slightly less grace. 🙂

I spent more time on the fruit trees and the shrubs, and cutting up enormous falling limbs with the handsaw. We amassed QUITE the brush piles. The main one is on the back patio 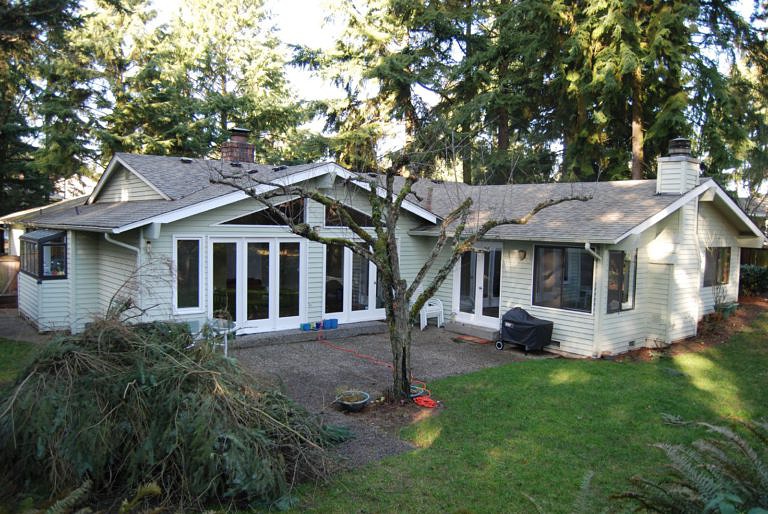 and the auxiliary one is by the six-foot-tall side fence. 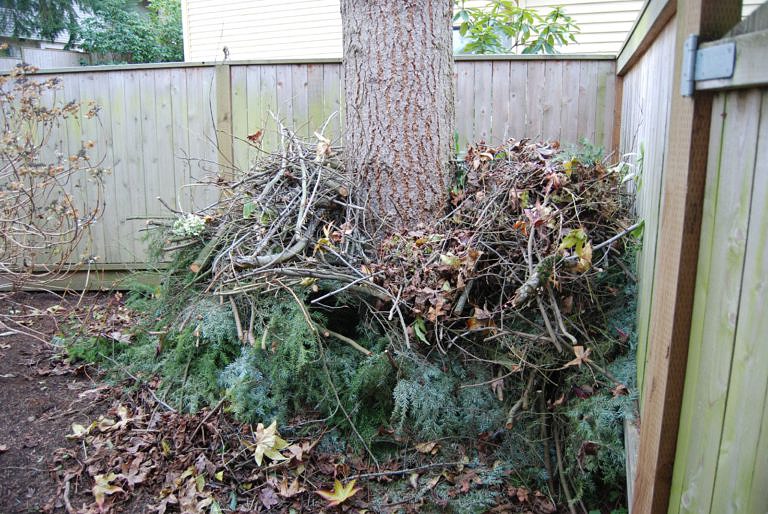 The plan is to try to get rid of the side pile via our semiweekly yard waste collection, and then possible rent a chipper for the enormous guy out back. Good luck, us.

The two biggest successes were the tree out front by the driveway, and the fruit tree right out back. Before, the pine by the driveway hid the house almost completely from the street. 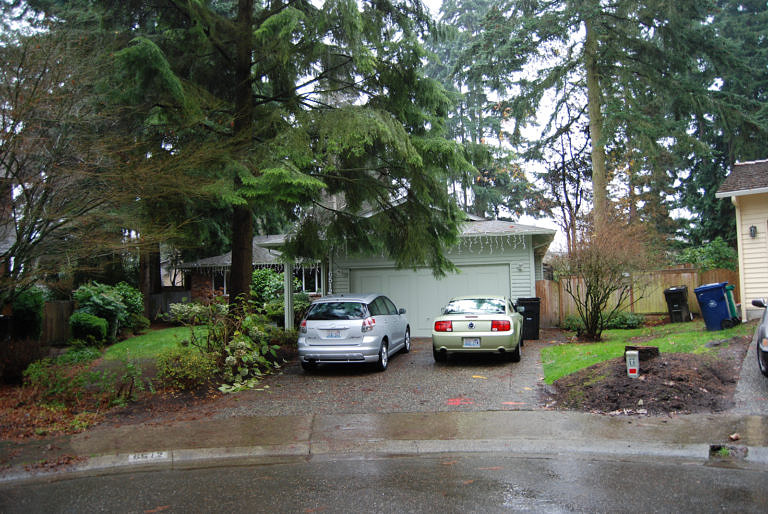 Whereas now, you can see the roofline! Kevin’s dad took the branches up the trunk about 8 feet (and it seems like more from the ground, since the limbs drooped so much). The front yard is so much lighter! 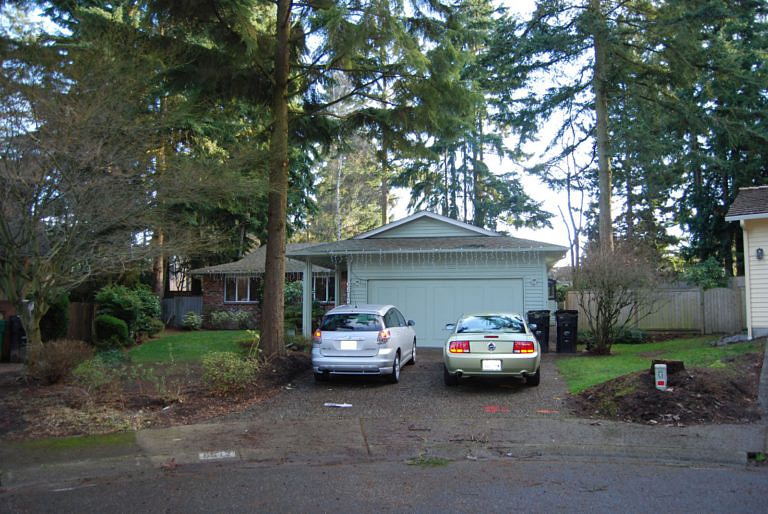 For comic relief feel free to ponder the mass of the branches removed vs the two 96-gallon, black yard waste bins to the right of the garage. Ha, ha…

You can see all of the cuts on one side of the trunk from this photo: 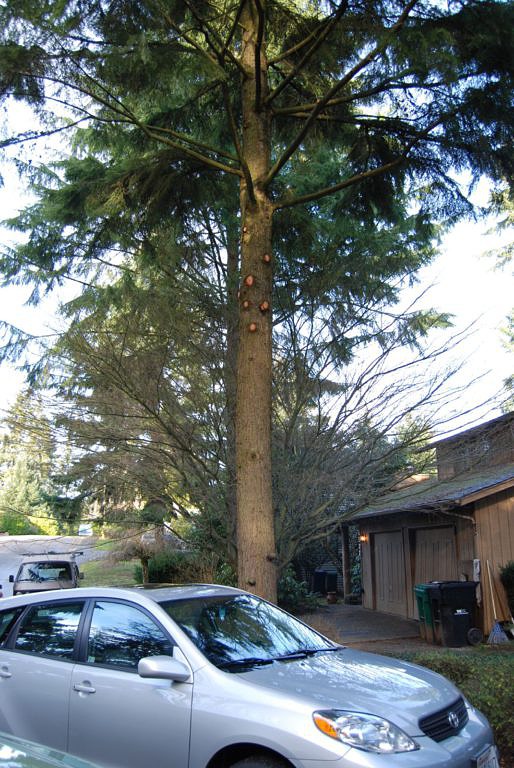 The backyard tree is another joy to me. The poor thing was hacked within an inch of its life and then abandoned, and the suckers had almost entirely taken over. (Picture, with snow for contrast, from a few weeks ago.) 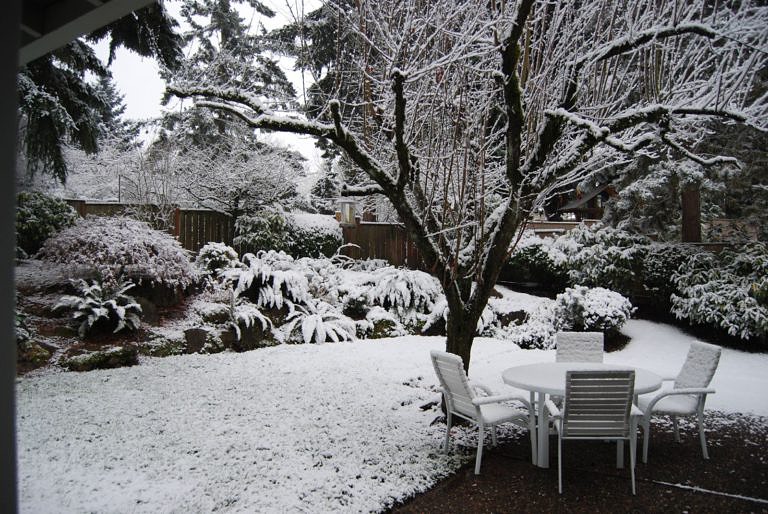 Now, there’s a defined center-top, very few suckers (the two that were left have some of the only branches that are growing at the back of the tree, so they stayed), no more hacked-off knobs, and much sparser, healthier-looking branches. We’re delighted. 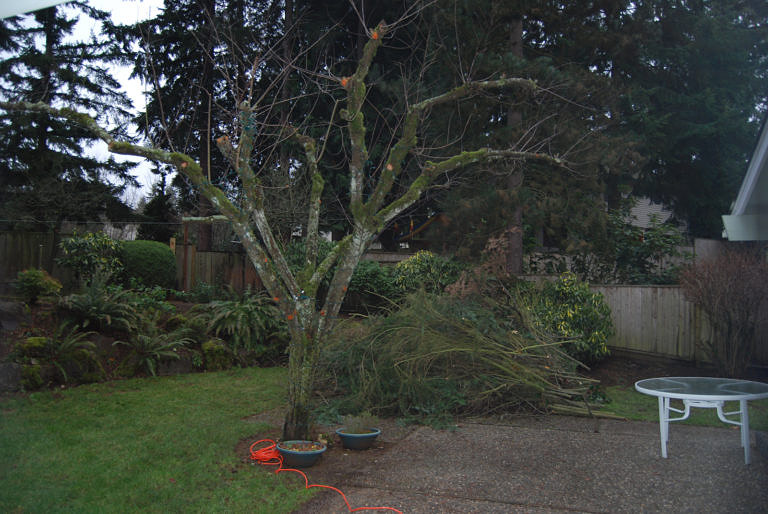 It’s still probably in its twilight years, but it looks so much less abused and dreadful.
Next step: convincing them all that we want them to visit for more than tree work. 🙂