When I sat down on Saturday afternoon to work on the daybed quilt basting, I ended up taking out about half of the pins. I’d pinned three lines along one long edge, and then worked in horizontal strips from the top, and when you held up the quilt that section had a marked sag, and pull on the fabric all the way along the pins. (You can see how crumpled and biased the fill was, too, in the previous photo.)

Once I’d removed about sixty pins, I smoothed the backing, smoothed the fill on top of it, pulled down the quilt top, and then set again to the task of pinning. This time, I was really pleased with how flat the fabric/fill/fabric sandwich was, and I was feeling proud when I finished. But again, held it up and there was a saggy 9″ wide horizontal band in the backing, where I’d folded the quilt to fit it into the available carpet space in my room. Oops.

So then I finally ditched the plan of listening to NPR as I worked (computer streaming), moved to the family room’s lush, huge carpet, took out about a hundred pins, resmoothed, repinned, and ended up with this: 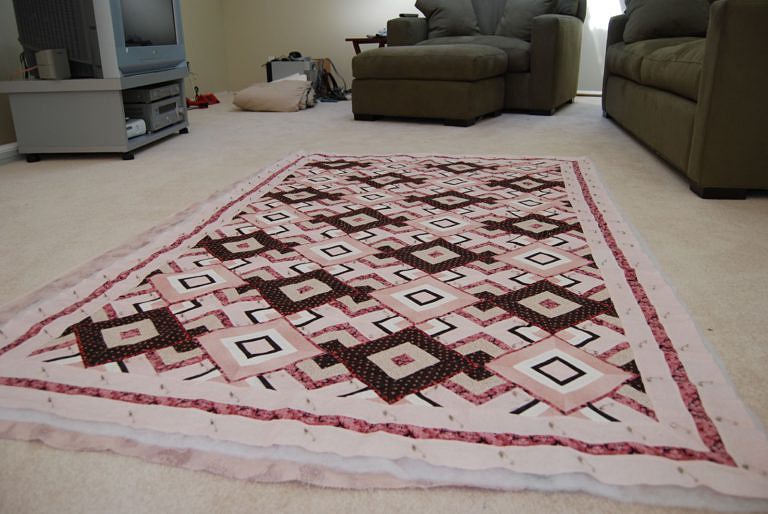 It’s gorgeous. The redos were annoying but completely worth it (I didn’t really hesitate – better to pull out pins than rip out stitches, or even worse, to hate the finished quilt). The new quilt sandwich is *flat* (aka, hopefully it won’t pucker when I start sewing). The backing is going to be a little bit crooked, but (a) it’s the back, and (b) I’m completely willing to chalk it up as a sign of quilt character. No complaints.

I cleared off our table to start quilting. 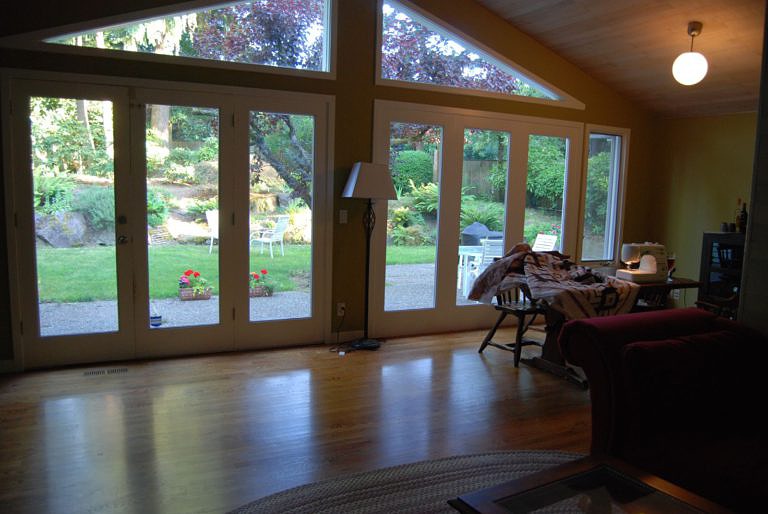 I’m working on my sewing machine, which is going to be interesting. (Machine quilting is easier on a quilting machine, which has a much longer arm so that the fabric doesn’t have to get all bunched when you swing it to the right side of the needle. ) I’d read advice on one of my blogs to make use of backstitching instead of turning the whole quilt. It works pretty well, but I find steering the quilt with only my left hand (while my right holds down the backstitch button) very challenging. Some of those backstitched seems are NOT straight!!

My first round of quilting will be to “stitch in the ditch” around the pink squares. I sewed 4 squares yesterday; my photo of the front didn’t come out, but you can see one of them well on the back: 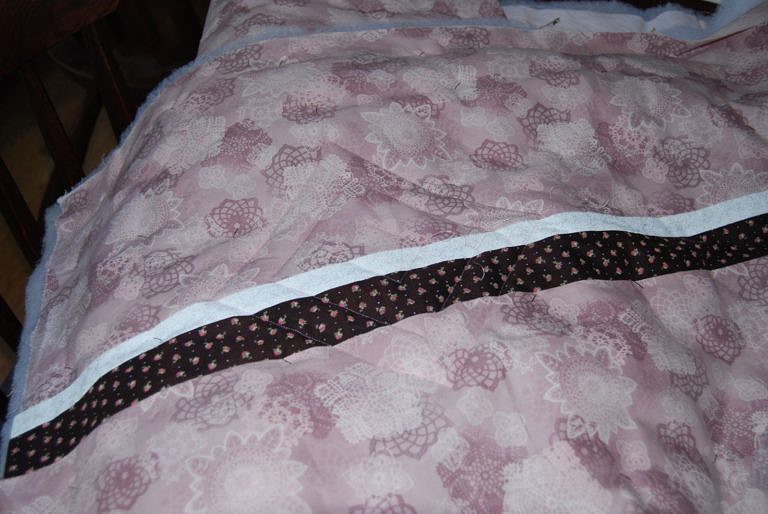 After that, I want to do the same around the brown squares(brown thread for the face, the same pink for the back, I think). I’m still debating what to do in the middle – I don’t want to highlight the non-symmetric nature of the down areas. Maybe a double diamond in the middle of the light pink x’s? I’d like to do some sort of ivy pattern down the legs of the x’s, but it seems like a disastrous plan given the sewing machine…? I might feel more confident later, we’ll see. For the trim, I found a stencil with a repeating flower pattern that I like a lot, so I plan to do a double band of that in each of the light pink strips.