It broke 80 today for the second day in a row, and it would amuse me to see all of the Microsoftees still dressed in their jeans and long-sleeved layers (habits die hard) if I wasn’t similarly overheated. I think we’re collectively less prepared than usual for the inevitable hot streak after such a cold spring and then the last week and a half of clouds, low-60s, and drizzle.

The fish are hanging in. The “fish room”/kitchen stay reasonably cool until late afternoon, but we’ve been battling a temperature spike in the late afternoons. We allow more temperature fluctuation than is really ideal, but we try to keep things around 79°. Today, between 4:45 and 6:00, the tank rose from 80.1° to 81.2°. The dudes aren’t really designed to deal with that, so I went into tank-cooling mode. We already put a fan on when we’re at work to cool off the lights and promote evaporation (which is cooling). I did a water change, which dropped the temp .9°, but it started to climb again quickly. I filled a nalgene bottle with ice, added a bit of cold water, and put it in the refugium – a few tenths of a degree! I’m making big ice cubes using our dechlorinated tap water (I really should have done this on Sunday) – a series of those in the refugium in the 5-7pm stretch makes a huge difference. And I turned off the white lights to cut down on heat for a few hours. Here are the dudes swimming in the blue light, wondering at all of the tank activity. 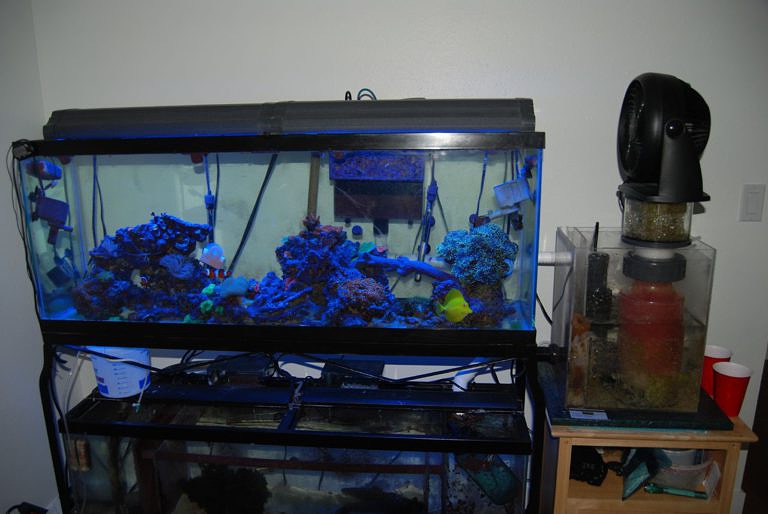 Luckily the corals and fish all look relatively happy and unstressed, given the circumstances.

Kevin came home from work and retired to the birthday present hammock. 🙂 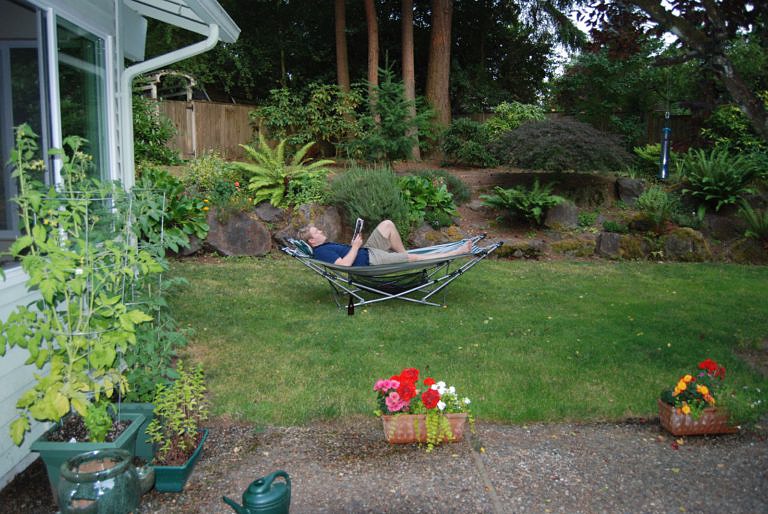 He’s doing a good job of making me feel like it’s going to be a good gift, despite presenting it on a day when it was mid-50s and drizzly. It’s from LL Bean, and the frame folds up VERY easily for storage/car camping. It weighs a million pounds, but it’s sturdy, so that’s okay. We’ve been bringing it in at night as far as the living room, but so far it’s in constant enough use that it’s just in and out through the back door.

You can also see my planters in the foreground. I planted these a few weeks ago, and they are really a treat and going strong. The one on the left is a pink (Berseba) Hiemalis Begonia, a red (Tango) geranium, Golden Creeping Jenny (Lysimachia Aurea), and a white impatiens. The one on the left is an orange/peach (Catrin) Hiemalis Begonia, a red (Tango) geranium, Creeping Golden Marjoram, and a mystery plant that has reflowered for the third summer. The flowers are vivid, and I am so enthusiastic – they make me happy every time I walk by. The Creeping Jenny is particularly exceptional — grows nicely without getting gangly and is a lovely accent to the dark green and red of the geraniums. I’m a huge fan.

Also, the tomato plants are huge and the leaves look happy, but we need pollinators! Our biology lab friend Sanna suggested that we find a dead bumblebee and use it to pollinate the flowers, so now I’m on the lookout.

One thought on “We wilt”