The Eagles haven’t played in Seattle since 2002 (two years before we moved here), and Kevin was deliriously happy when he found out that ’08 would be the year. He bought tickets about the instant they went on sale, and so we bused to the game on Sunday. Kevin’s jersey attracted plenty of good-natured trash talking from a bus full of season ticket holders (you can tell from their ticket-holding lanyards). Made us both grin. The 12th Man (aka massively cheering crowds and a loud stadium) is a major Seattle Thing. We’re used to 12th Man banners at work, and by January you really see them everywhere. I regretted that I didn’t bring ear plugs, but my coworkers assured me on Monday that it had been a “quiet” game.

I have three NFL teams that I cheer for – the Eagles, the Patriots, and the Seahawks. Stack ranking them is difficult. I started watching football in 2002 because it was a prereq for dating Kevin. When I’d come up to Boston senior year of college, we’d spend Sundays in his dorm room on the futon, eating turkey and cheese sandwiches and watching the Eagles game. I now have seven years of Eagles/Donovan experience, and the Pats and Seahawks trickle in around four years. But to have both Eagles and Seahawks on the field was so, so cool since I know so many of the players (despite all of the injuries). Here are Eagles running onto the field. 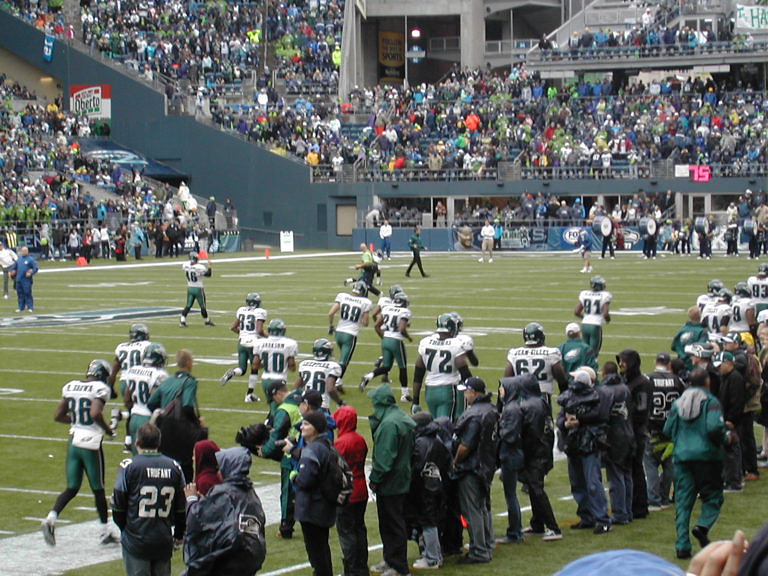 The seats were awesome – just a few rows off the field, right by the endzone and the tunnel that the Eagles ran out of. I was totally bemused to find that all of my TV-honed football watching skills were useless. I’d watch the play, be mystified, and then watch the replay on the jumbotron to understand what had happened… Oohhhh. 🙂 I’m sure part of it was the angle, but all of my playcalling and positional skills were moot. I even had to check the board to see if we’d gotten first down. 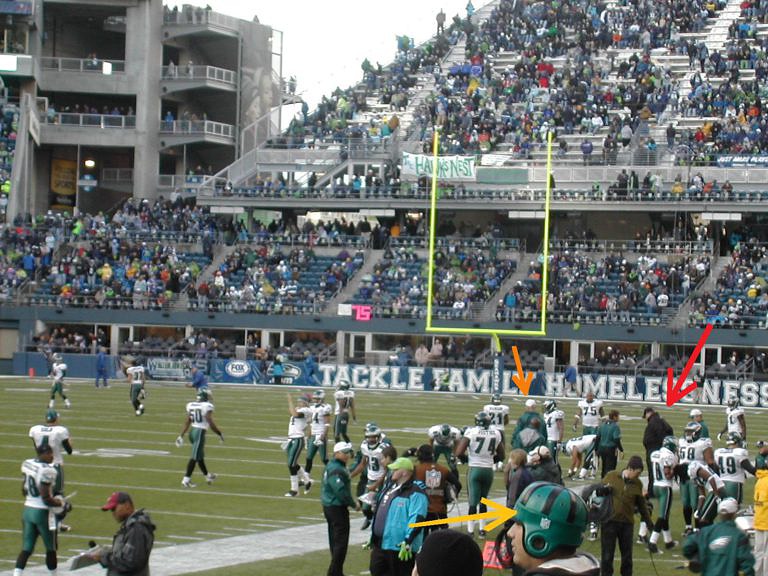 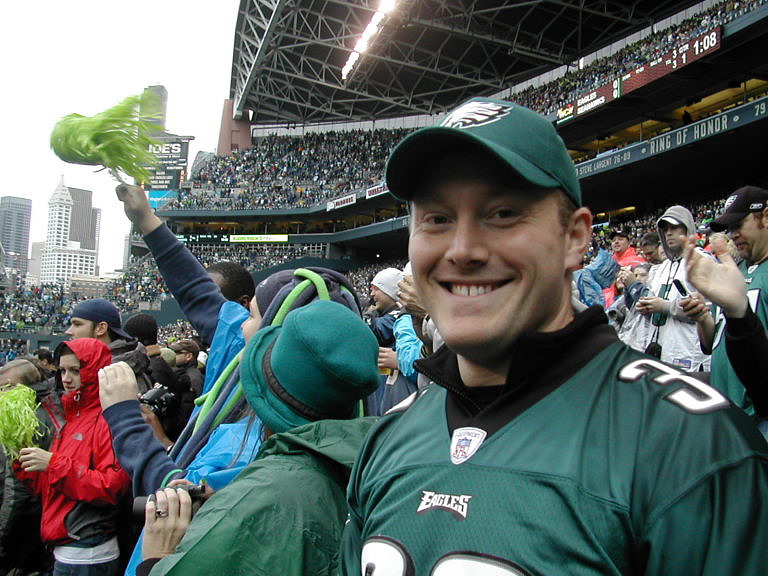 Our seats were especially neat because they were next to the tunnel to the Eagles lockerroom. By the fourth quarter all of the Seahawks fans started to empty out, and the Eagles fans drifted our way. The Eagles win was awesome, but even better were all of the smiling, chatting Eagles heading for the locker room. Here’s Donovan (green hat, hand waving, right of center): 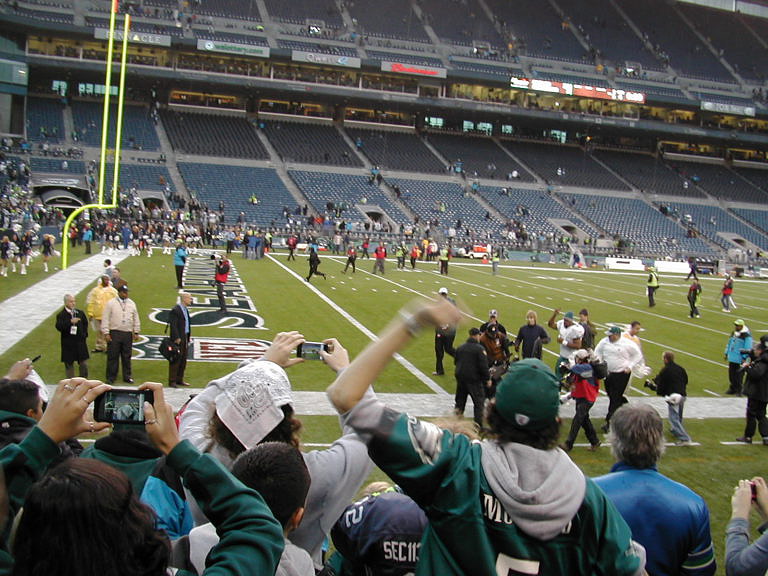 All of the Eagles people started cheering “E-A-G-L-E-S, EAGLES!!” and singing the “fly, eagles, fly” song about halfway into the fourth quarter. The stadium was nearly empty with 8:00 to go – it really felt like only the Philly crowd was left. I actually found it to be one of the most severe expat experiences I’ve ever had – this tiny, tiny (100 people?) but emotional group waving Phillies banners and singing Eagles chants. (When it’s the Red Sox, I feel like we’re in the thousands, but for some reason this made me feel so far away from home. It made me pine for the east coast. Sad. And I *love* the Phillies banner. Our sort of people.) 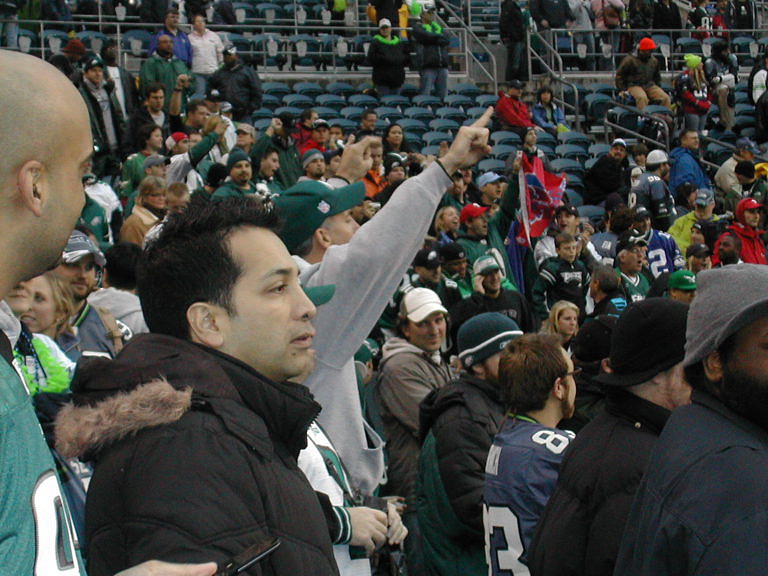 We watched all of the players walk out before we left. So fun. It amused me to no end to walk past all of the men’s rooms on the way out and hear them singing away in there about the E-A-G-L-E-S, EAGLES!! and how they fly. We got so many high fives (due to Kevin’s jersey), and it was an awesome game.

I have to post a photo of Akers. (Who not only got both extra points, but kicked four field goals and gave me 15 points in my fantasy league. Rock on. I appreciate his contibutions to both real & fake football.) 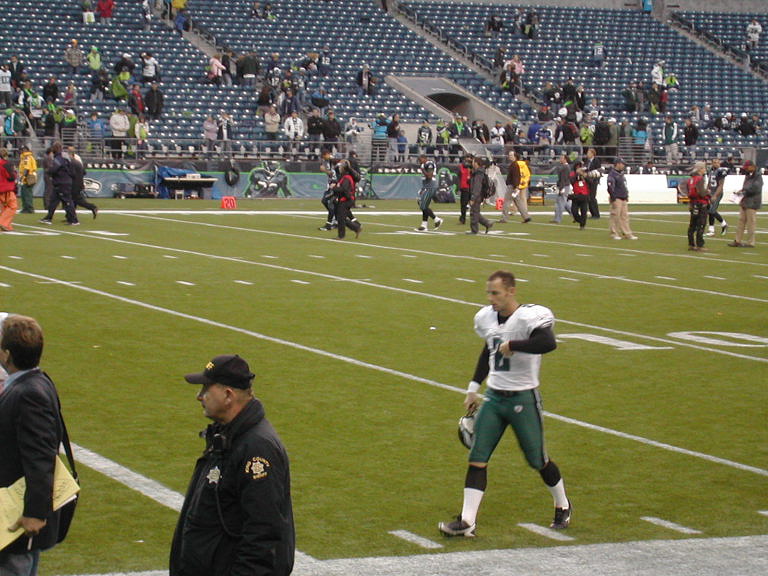 All up, what an awesome afternoon.