Thursday morning, I woke to a before-dawn thunderstorm, and apparently the flakes started falling in earnest shortly after that. Kevin roused me at 10:30 (a bit of sleeping in since work was not on) and there were already so many inches of snow that the backyard had lost definition – just whiteness and the ground seemed oddly elevated. 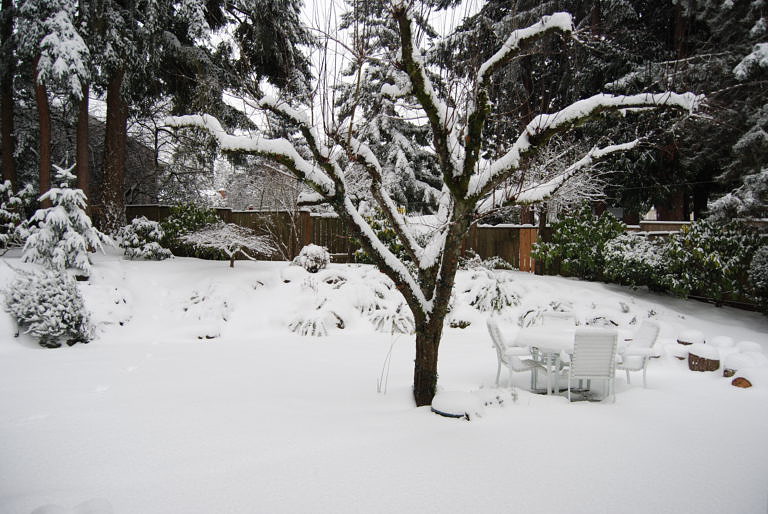 All of our big rockwork, ferns and bushes were almost entirely mounded over. You can see the tracks of some creature who’d been snuggled up by our grill in the bottom left corner of the photo and apparently decided to break for it up the hill after we already had many inches.

The light in the house was so unusual during the day. Our bumpout window in the kitchen and the skylights in the family room were entirely snowed over. 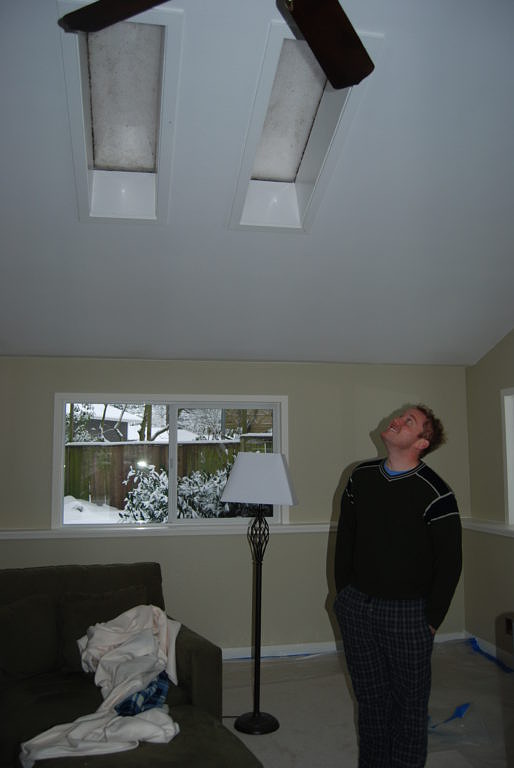 Meanwhile, the snow reflected the light back up and so it seemed much brighter outdoors than usual. I set up at the dining room table with a laptop and a mug of tea so that I could watch the snow swirl around the backyard. Neither of us was able to log into work or email, too many people stuck at home and the servers couldn’t handle it. I kept trying every so often, but it was a real snow day. (And the best part of that as an adult is that you don’t have to make it up at the end of the year!!)

A little after two, when it became clear that the snow wasn’t stopping, we headed out for a trek to see the neighbourhood. I finally got to use the cross country skis that I got as a Christmas present the year we moved out here. I had to take the stickers off before we went out – I’d forgotten what a great deal they were. 🙂 With no plows or sand trucks, our home is ski-in/ski-out, so I clicked in at the top of the driveway and off we went. Kevin manned the camera. 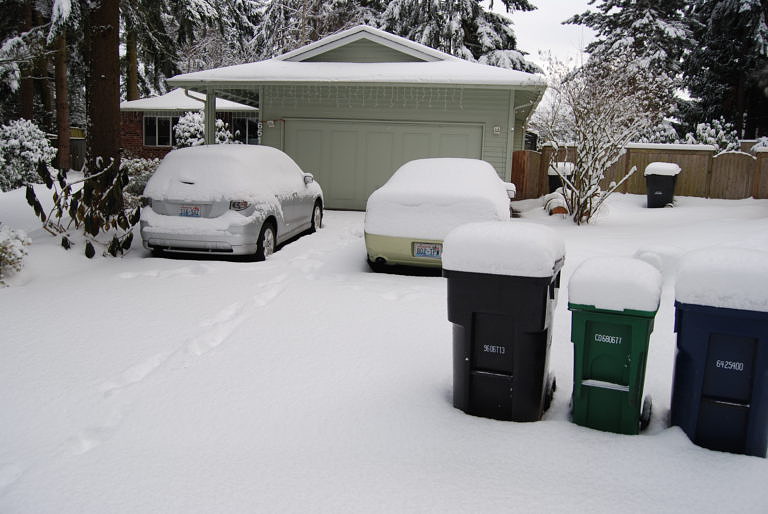 Our street Ts onto a larger one, and at the corner we were surprised to see signs that the road was closed. 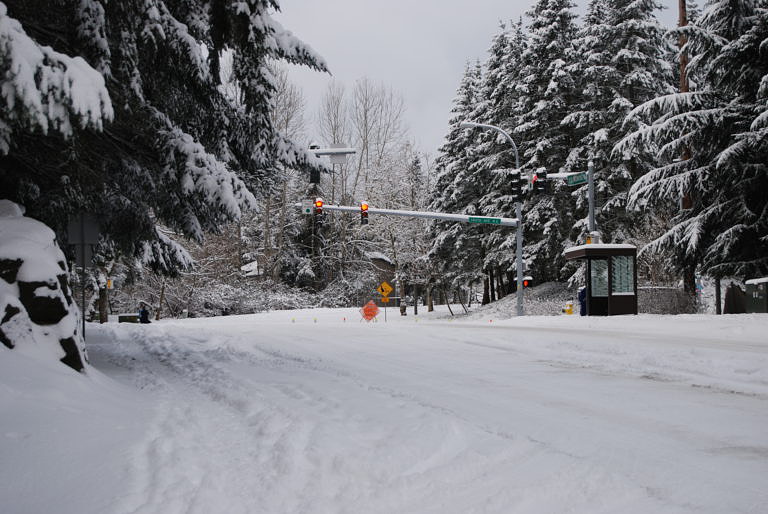 Kevin went to investigate later (he ended up doing a much larger loop to trek to the grocery store for apple cider) and was deeply amused to find three metro buses, clad in their chains, stranded halfway up the hill.

There were only a few sets of tire tracks on our street, but the main road was quite compacted. There were occasional cars, moving slowly, and the first appropriate use of tire chains that I’ve seen in Seattle. We headed down the street to Grasslawn Park, and I was impressed (as usual) by how much use it gets. There was very little pristine snow left, and plenty of people out building snowmen and igloos, plus a few groups of teenagers and some intrepid people passing through on bikes. The playground areas were more compacted than the roads! Even with all of the activity, there was more than enough snow for skiing. 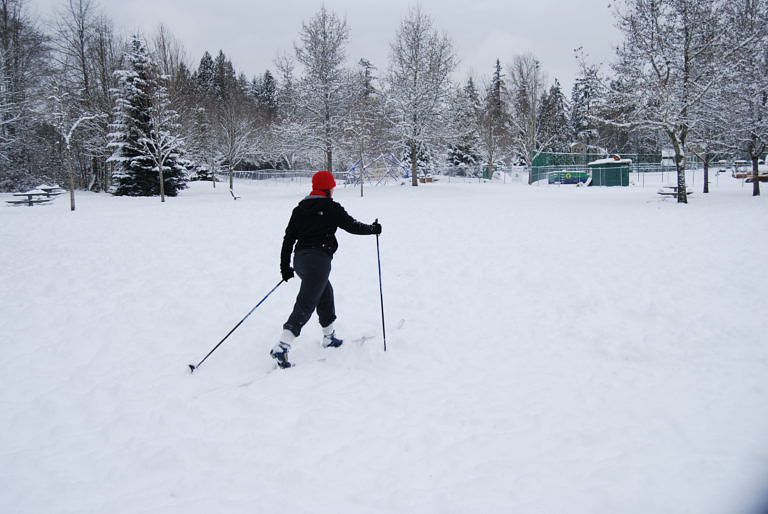 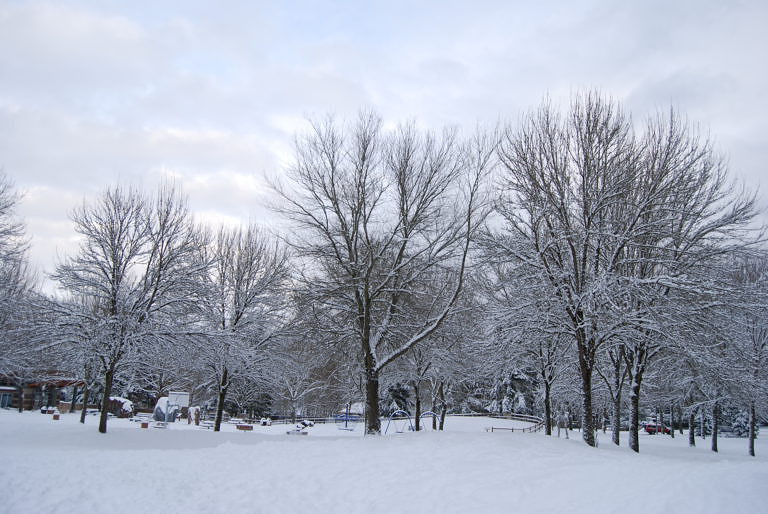 We were most impressed to come across a postman out on his route on the way home. 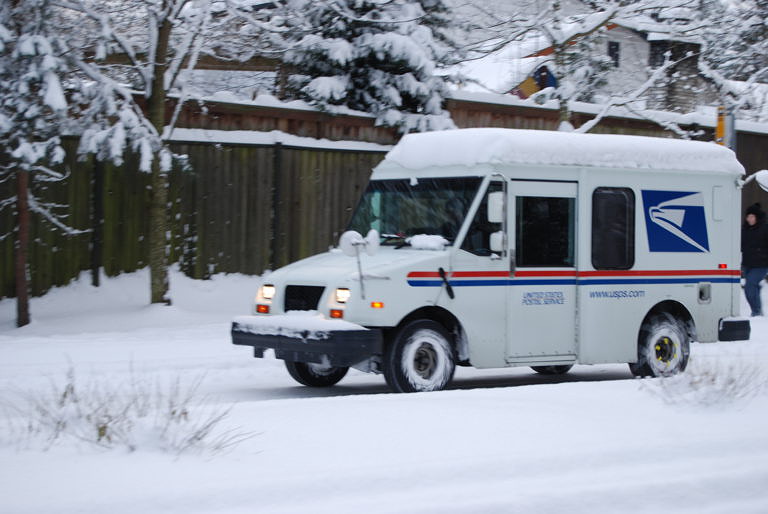 Amidst all of the reports of people abandoning cars on roads and highways, and metro buses spinning out everywhere, and general Seattle snow-related grinding to a halt, it seemed like an unusually brave and steady sight.

One thought on “Snow Day!”