I brought the sewing machine in to the family room so that I could start sewing H’s lion costume while we watched TV. (We’d been holding onto a Netflix DVD since March, and finally despaired of ever being in the mood for it and sent it back. Now we’re watching season one of Mad Men — it’s such fun to have an “active” Netflix account again!) Putting the sewing machine on the side table while I sat on the ottoman worked surprisingly well, even if it doesn’t promote perfect posture. 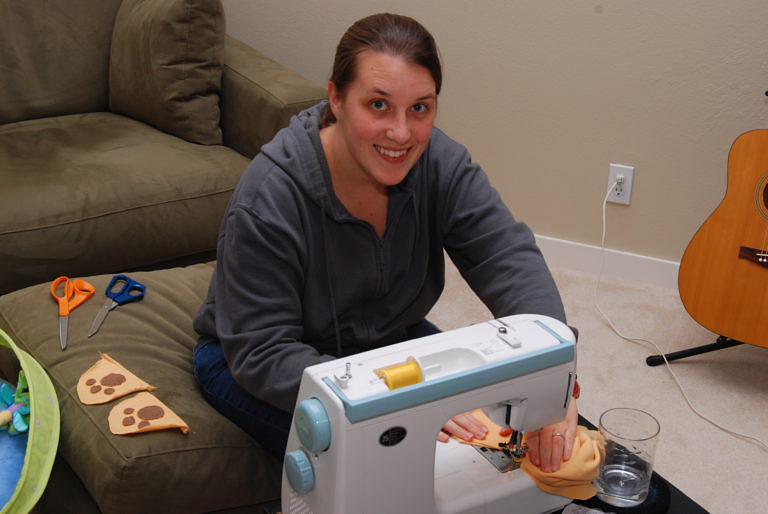 Lots of little paws, a tail, and then cutting and sewing the body and fashioning a hood. I winged it instead of using a pattern which generally turns out reasonably well. (Not professional by any means, but close enough for a Halloween costume). I used a sleeper as a rough guide for sizing on the body. Unfortunately, though, it seems that all of the nursing and sleeping craziness in the last few days must have been a growth spurt (the well known 9 week one?? He must be on his own schedule) since all of the three month clothes are suddenly too small. Lion costume included. I have thoughts on how to add length and girth, but it’s going to be several more hours of sewing and won‘t be ready in time for the parent baby Halloween class. Luckily, Kevin’s parents and grandmother are arriving in two days so there will be plenty of hands to hold H while I finish his costume.