The sun is so very low in the sky – this shot is taken from the back door at nearly noon on December 22nd (the day after the the winter solstice). 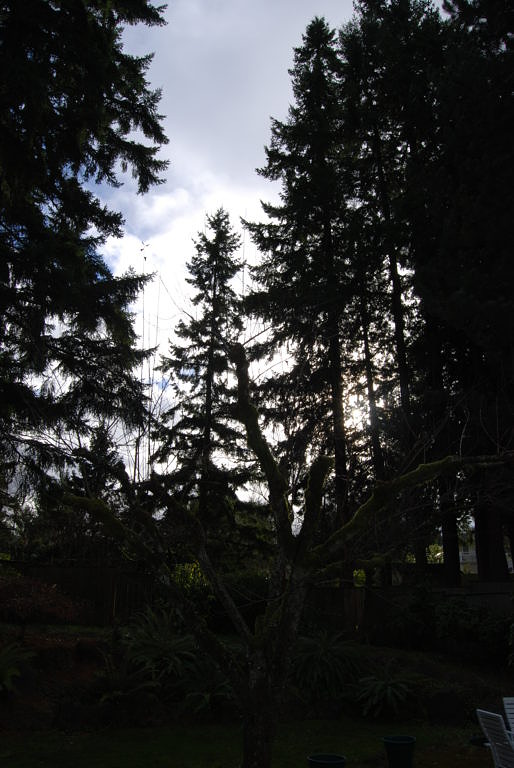 Most of the time, we have clouds this time of year (so dark and deep), but every now and then the sun breaks through and glares at us in a weak winter sort of way. We’ve had an unusual number of clear mornings on the weekends this year, and it occurred to me to finally notice how low the sun is even when it’s out. After taking that photo and thinking the sun actually looked less than a third high in the sky, then I had to search on the internet to find out the exact azimuth in December. The initial results were all trig (my nemesis, I still have a mental block on all of that jr. year of high school math), but then some kind soul broke down the solstices and equinoxes in the northern hemisphere as a very simple:
Winter Solstice: 90 – (Latitude + 23.5)
Equinox: 90 – Latitude
Summer Solstice: 90 – (Latitude – 23.5)

Since Seattle’s at 47°37”, that puts the sun at 19° at the Winter Solstice, 66° at the Summer Solstice, and 42° at the equinoxes. Is that right?? If so, no wonder we’re such vitamin D-deficient, sun-deprived, pale creatures. It’s certainly not Arctic Circle levels of dark, but no wonder we start feeling a bit beleaguered by the lack of light at this time of year!

One thought on “19? That math can’t possibly be right”