I bought a pink skein of Cascade Sierra on clearance (a complete impulse purchase on a quick trip to buy needles – my guard was low, carrying a baby and corralling a three year old). I was thinking it would make a good tulip hat, but the gauge is obviously way too thick, and I think it’s actually not a great color next to her face. It’s been sitting near my desk, waiting for inspiration to hit. As I cast off the Downton Abbey knit along cloche, suddenly I found myself casting on a little dress. I’m using Topaz as a rough guide, although I changed the hem, am knitting in the round instead of seaming it, and had to adjust for gauge (4.5 st/in instead of 4). I also decided to write a little intarsia heart pattern instead of the southwest-inspired fairisle in the pattern.

It’s an addicting little knit. Somehow in spite of knitting for 24 years I’ve never tried intarsia before. There will have to be more of this in my future, it’s so satisfying. I experimented a lot with which way to wrap, so some edges are smoother than others and it needs a good block, but super fun. I meant to put it down and take a picture several rows ago – it looked for all the world like a jellyfish, with long, long white tendrils and shorter pink ones, but now that I’m further in, they’re less dramatic. 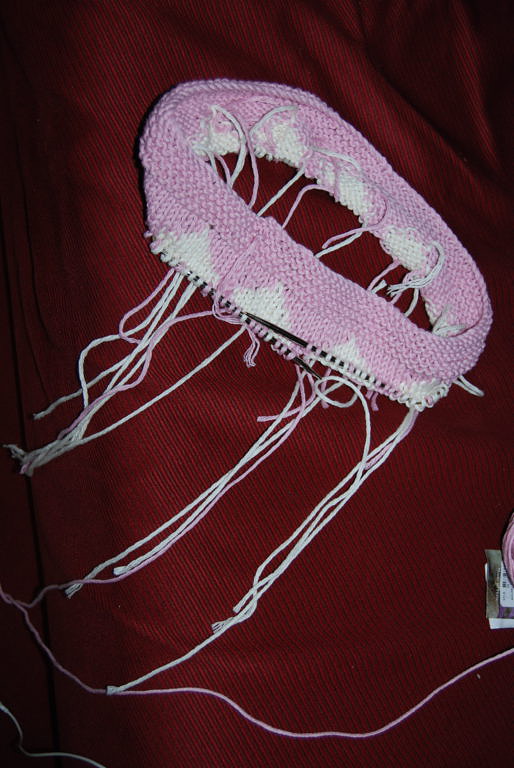 Such a sweet, pink, cheerful little knit. I even found a new-to-me pink knitting/house blog to enjoy while I work. What fun.