The light in our kitchen is one of those 1970s/80s florescent things with the wood trim and the plexiglass panels. We’ve pretty much detested it since we moved in – it’s dim, yellow, ugly, and date, and half of the fixtures were dead. The ones that were left have been gradually flickering, then perishing, until we were down to one. We have vague plans to someday remodel the kitchen counters and would install can lights at that point if we ever got there, or maybe track lighting if we didn’t have enough ceiling/roof clearance for cans. But Kevin decided that the moment had come and this was something he could definitely take care of himself, so he did. He ordered new fixtures and new bulbs, removed the leaking (toxic?) old ones, and installed the new. He also found new plexiglass panels that aren’t yellowed (!) and let a lot more of the light through. He started with 6 bulbs, then removed them one by one until we were no longer wincing from the brightness every time we walked in the kitchen. This photo was with all six: 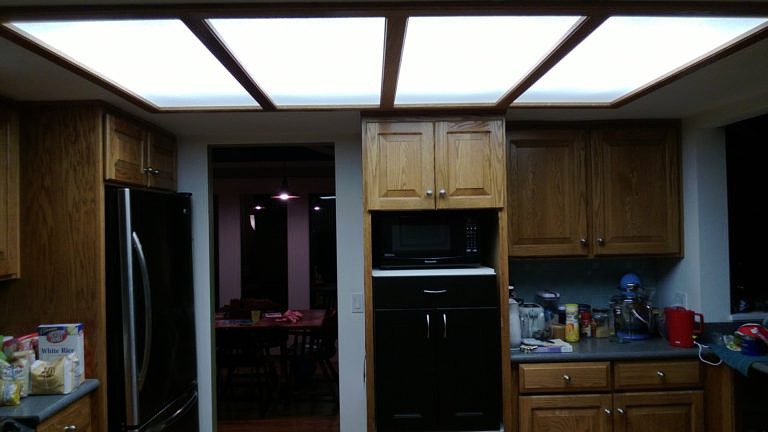 You can actually do dishes at night and see what you are working on! It’s still not modern or pretty, but it’s completely amazing what a difference it’s made. 🙂