In a fit of wild splurging (ha!), I spent $11 (minus a $5 coupon, so $6) to replace our dish rack. It’s almost a decade old – I bought it for my Boston apartment. It was starting to rust when we moved into the house five and a half years ago, but still seemed so serviceable. Now not only are parts of it rusting, but all of the white plastic coating is flaking off. Farewell, household object. 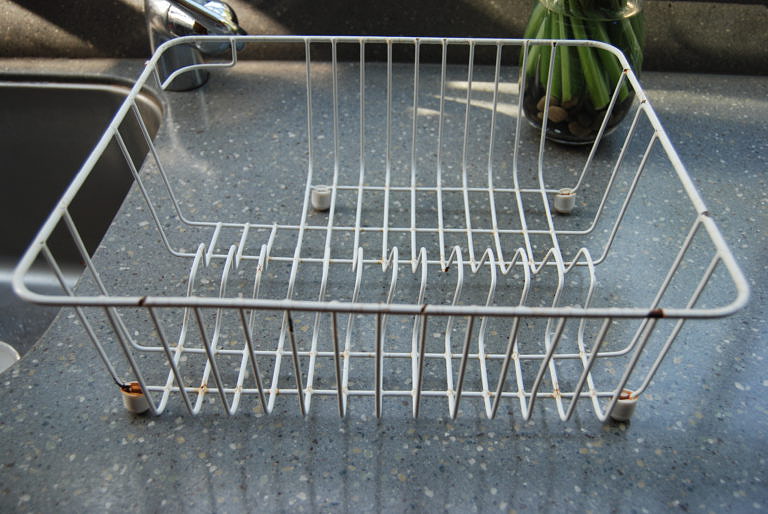 The new one is so snazzy and un-rusted, and I was able to find nearly the same layout, just a bit bigger. So, yay.

More wild splurging: all of the tulips were partially open and uninspiring colors, but you could buy 30 daffodils for $6, so I did. I can’t wait for them to open, it’s such fun anticipation. 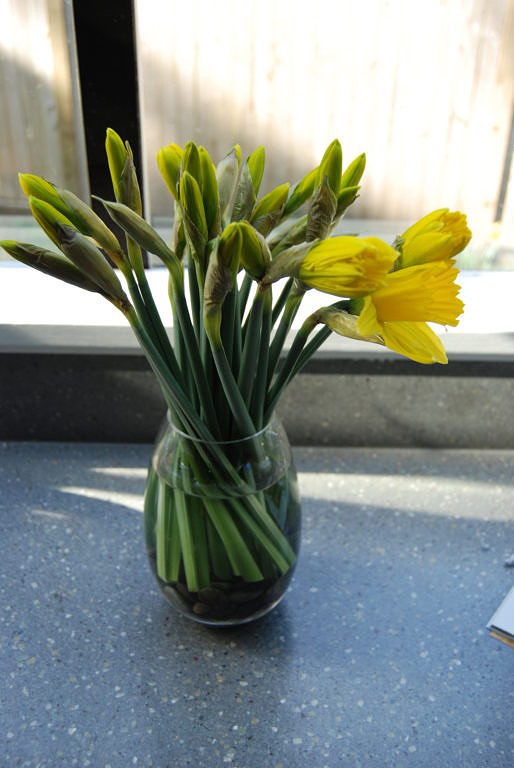 And “for the record” photos – my kitchen reorganization continues. While we wait for the roll-out shelves to arrive, I put everything back into the black pantry cabinet. Then I started to clean the crumbs off the counters, and somehow that progressed to moving the mixer and oatmeal things, which escalated to swapping the coffee pot, compost bin, and then swapping the bowls with the cups. It’s all so logical now, I love it.

When we first moved in, there were several constraints that no longer apply. Most of our kitchen outlets were on the same circuit as the fish tank, so if you tried to, for example, brew coffee, then everything shorted out. So the coffee maker had to go to the right of the sink. (We had an electrician come in last Spring and put in dedicated circuits for the new tank, so that limitation is now moot.) That left the outlet next to the oven for the waffle maker/griddle (or again, everything would short out), which left the counter next to the microwave for the mixer and toaster.

The knife block was a first anniversary/wedding gift, and the oatmeal made it onto the counter when I stopped wanting to crawl down into the cabinet every morning when I was pregnant, and it’s convenient there, so it stayed. There wasn’t enough space in our glasses cabinet for kids’ cups, and there wasn’t enough space on the bowls shelf for the kids bowls, so everything was hodgepodged together. You can see it in this shot: 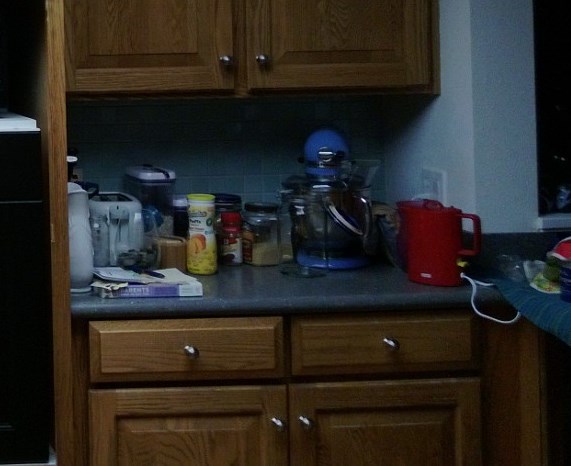 Now, the toaster and oatmeal things are where the coffee pot used to be, and the bowls are right above. This is so exciting, partly because the bowls and Henry’s vitamins fit really well there, and partly because it makes way more space for dishes to go while they’re waiting to be washed, so we no longer have that traffic jam of dirty things that wend their way along the length of the peninsula. So much space! 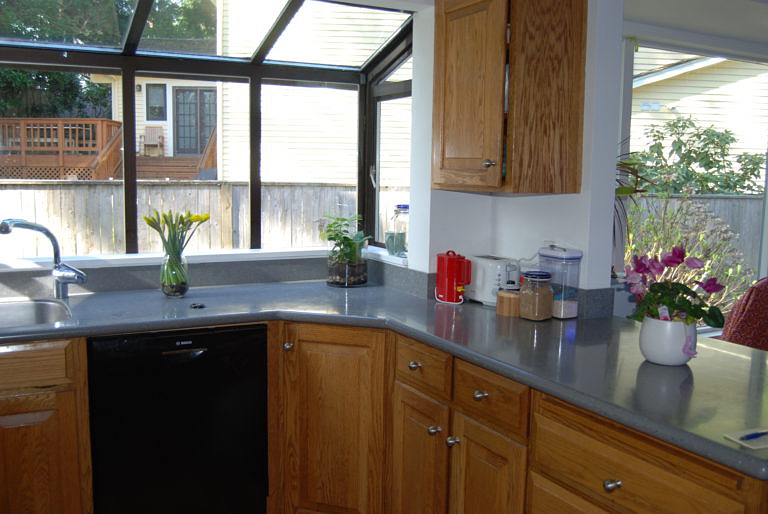 The knives/coffee/compost counter is likewise full of space. 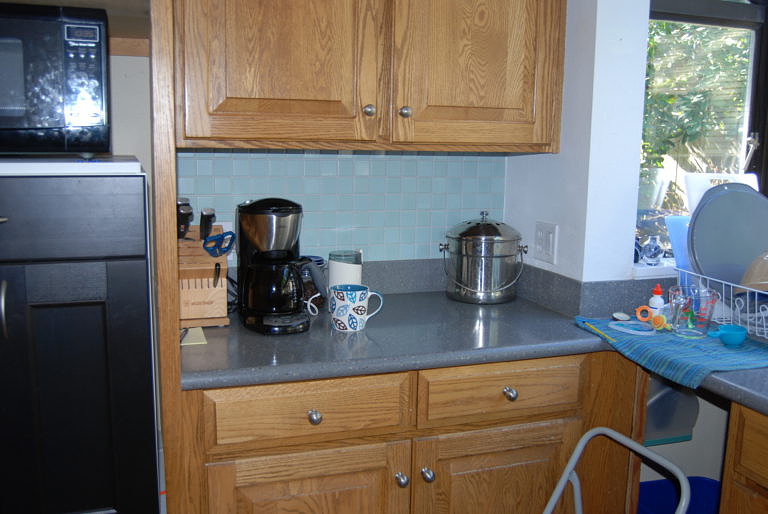 And the only major hit was to the counter next to the fridge, which now has an extra mixer. (Ignore the large black thing in the photo, that’s just the griddle, busy drying there. It stores above the microwave most of the time, as usual.) But that counter is pretty full anyway (onions, tomatoes and squash rest here), and isn’t one of our work spaces. We just need enough room to put down the spoon or spatula for stirring whatever’s on the stove. 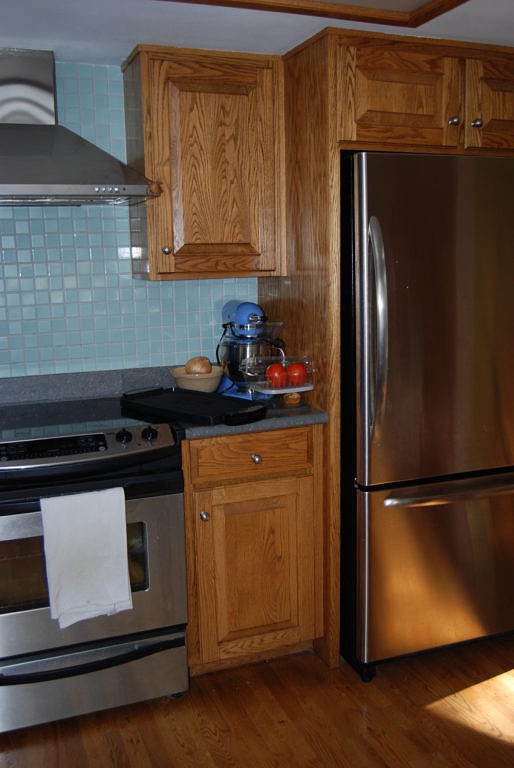 Everything’s still within reach, the organization is just SO much easier and more efficient for the space we have and it looks like so much less clutter. Nice. We also have a large bottom cabinet and a small bottom cabinet that are effectively empty right now. We’ll use part of the big cabinet for cereal, and part for art supplies and possibly puzzles, but now I’m debating what to do with the rest. What a fun problem to have! So much new space.