We got back from our trip on Sunday night, and the big excitement waiting for us was that our side yard work was scheduled to begin on Tuesday morning. I snuck out right before the guys showed up to take one last set of photos of the way everything looked before the fences started to come down. This isn’t a perfect before, since there’s lots of pink spray paint on the fences that were being replaced, white on the ground to mark our stonework, and orange tags on the plants that were being transplanted. The side yard also looks worse than usual since I stopped weeding a few weeks ago, knowing that the trucks would be coming in and scooping it all away anyway.

The recap on this side of the house is that the side yard when we moved in was a very dark, densely wooded empty space. You can get a sense of how tree-filled it was in this photo from our inspection in 2007. 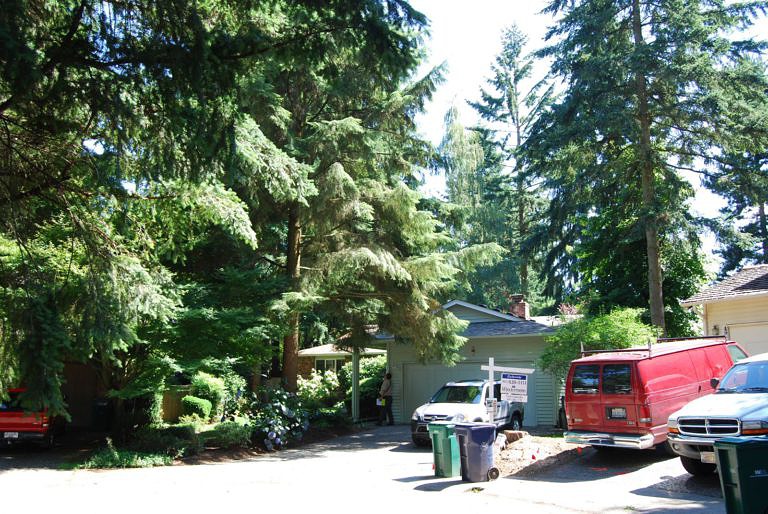 Here’s a photo of the corner of the house. 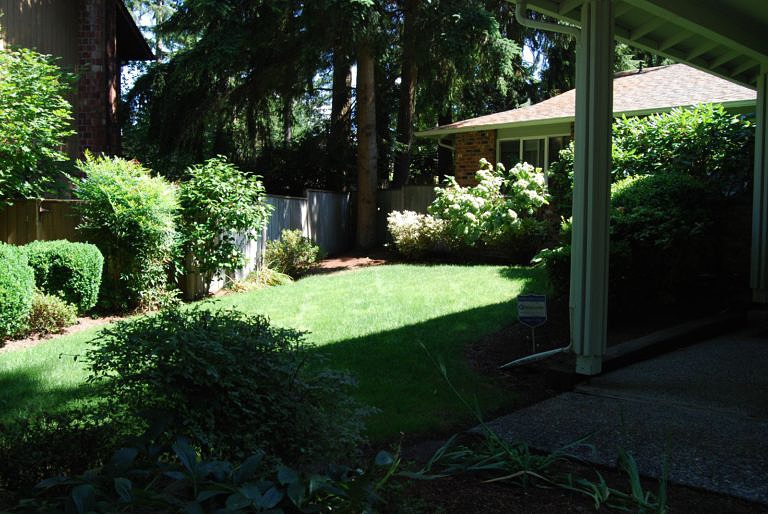 There was a shed which was removed before we moved in, and we did a lot of pruning ourselves that first winter (I cut down a small tree myself). You can see what that looked like in the second half of this post. It was really a dark, terrible space.

We had one pair of trees taken out in June 2008. I planted tulips in 2009, that bloomed for the first time in 2010. We planted blueberry bushes (that died quickly) and lavender (that lived but didn’t thrive) in April 2010. I finally dug out the enormous laurels with runners going everywhere in April 2011. We removed three more trees from the side yard (two in the back and one in the front) in May 2012, and this time we were smarter and found a company that removed all of the wood for free (we also had someone in to grind the stumps). That tree work was the death knell for the fence. We said they could remove a section for their drop zone and equipment, and they lifted it away with bare hands, it was so rotten.

So then we had 169 feet of fence to replace (all original to the house, there was the section along the side yard, and three more neighbors’ worth in the back). But it was sort of a can of worms, because to replace the fence properly, we would have to get rid of the dirt that had been piled there from two additions (the family room in the early ’80s and the bathroom about ten years ago), since there was a multiple-foot difference between the ground level on our side and our neighbor’s. The dirt was also all piled against the house, and needed to be shoveled away because the slope crumbled it back so that it covered the siding.

Kevin’s hope for ages had been some sort of terracing and attractive landscaping, but it seemed like too big a project. Home with a newborn in September, though, I started sketching out rock walls and paths and a seating area and bright flowers for four seasons… we got one quote in the fall for the dirt excavation, but it was expensive and the man was bombastic and kept telling me not to worry my pretty little head about things. Yikes. Then one of our neighbors had a ton of work done this spring and it finally kicked me into gear. I did a ton of research and phoning around and estimates, but our neighbor’s referrals came out the best and Guy really seemed to listen, with constructive additions. We’ll do the finish work (mulching, planting) ourselves, but they’ll take care of the dirt removal, rock work, gravel path, old fence removal, and subcontract out the fence work (in a happy coincidence, to our favorite contender from our fence-only bids). Perfect. Two weeks of work, and we’ll have a skid steer and portapotty on site for most of it.

Back to photos of the walk-through:

The first photos are looking out from the master bedroom. The fence with the pink Xs will be replaced with a new cedar fence (and taller), the fence on the right is four years old and will stay. We’re trying to match that style. View from the doorway: 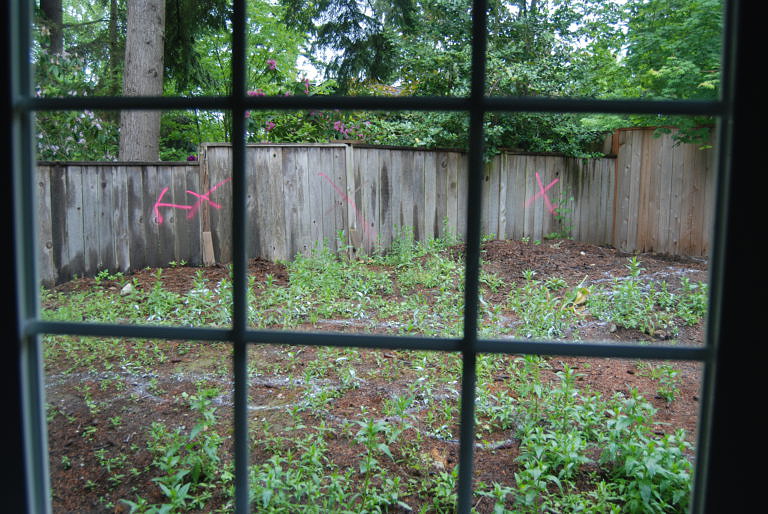 View from the bathroom door. You can see the top of the neighbor’s basketball hoop, and a chandelier through the top half of one window, but otherwise it’s extremely private. 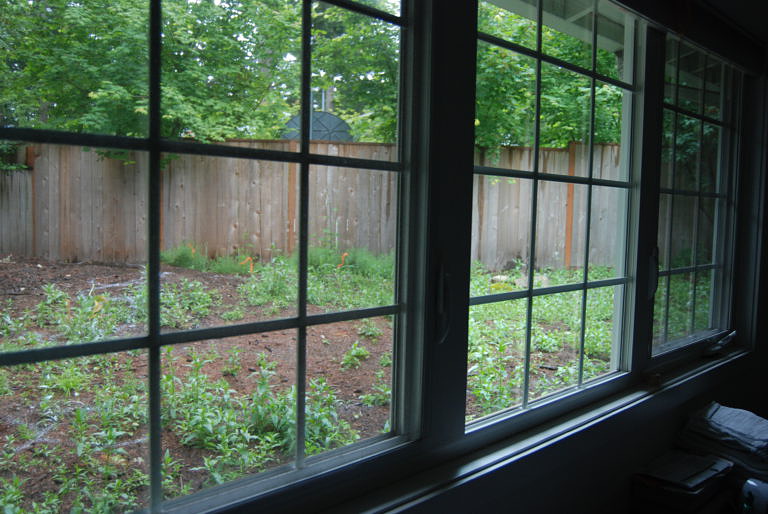 View from the bed. 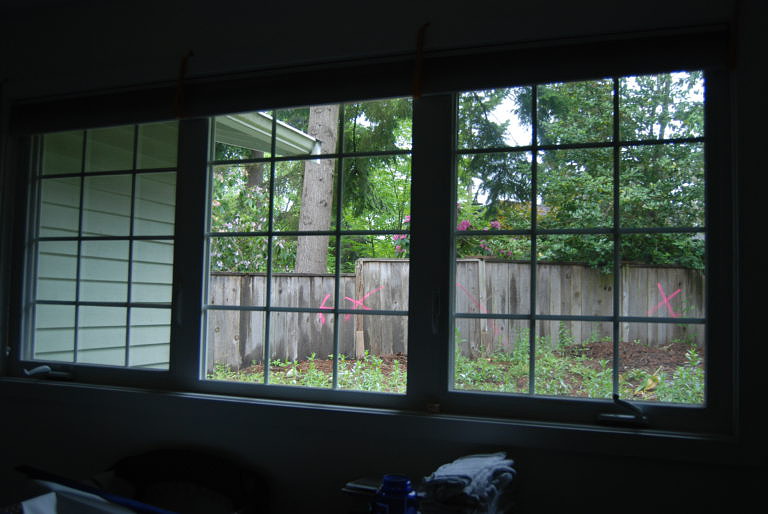 Heading out the front door, this is our large pile of dirt, soon to be gone. (It used to be the rootball of a tree, now we’re going to level it and plant grass.) 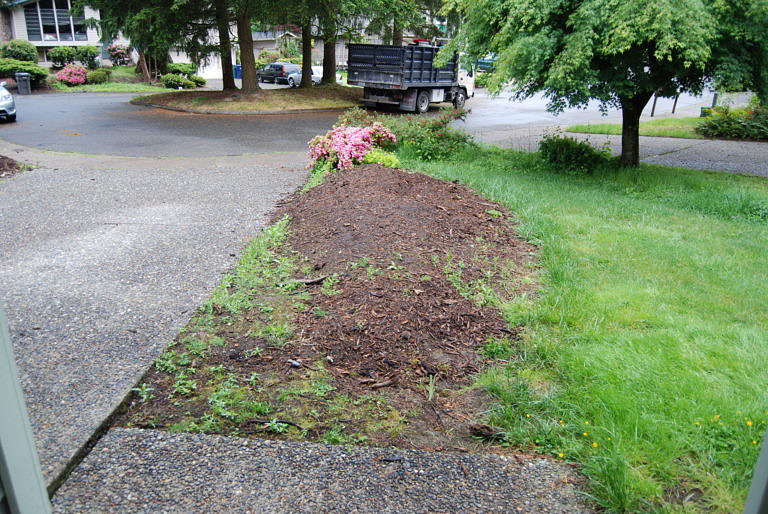 It’s about two feet high and one of Henry’s favorite climbing/walking spots. He’ll miss it even if we won’t. 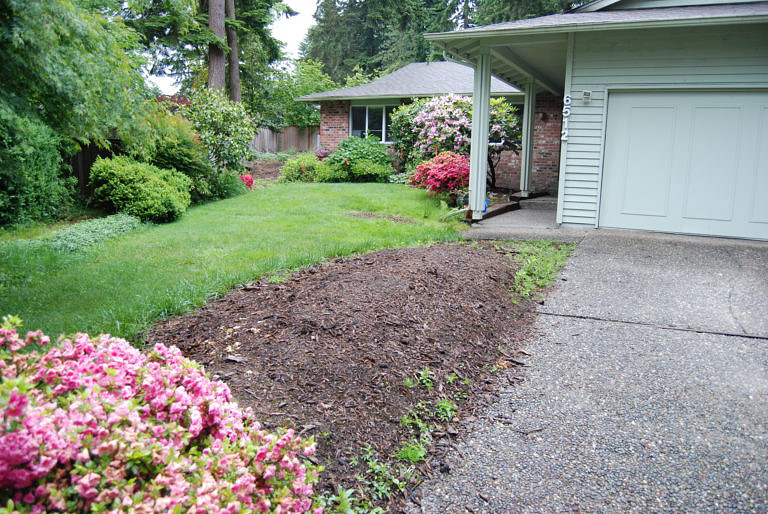 A view of the front of the house. We’re taking advantage of the large machinery to try to transplant three bushes from the front yard to the side yard. The dark pink azaleas will stay put for now, but the pale pink rhododendron behind it blocks Henry’s window, the camellia to it’s left is too close to the house and wants to be many feet taller than I have to cut it so that it doesn’t grow into the gutters, and the hydrangea to the left of that is also too close to the house and too tall for in front of a window. I don’t know what we’ll replace them with, but they’re good bushes and I don’t want to damage them or get rid of them entirely. 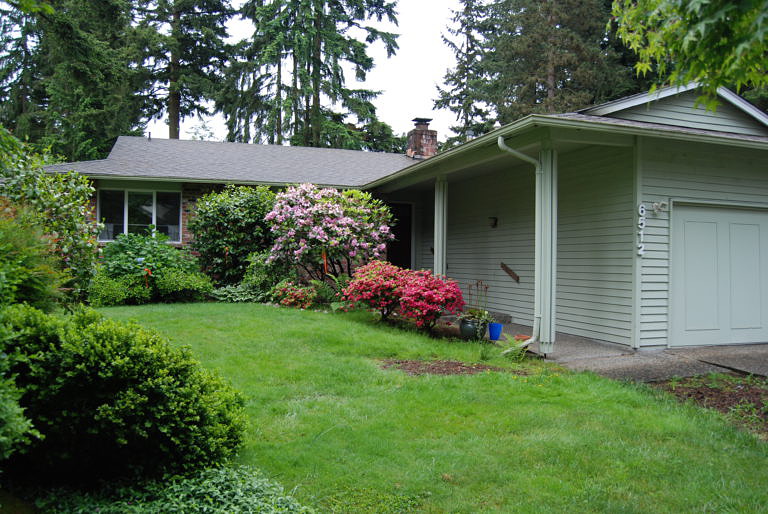 This view is where the fence used to be — it’s been open to the side yard for about a year. We’re going to put a fence back and add a new gate. 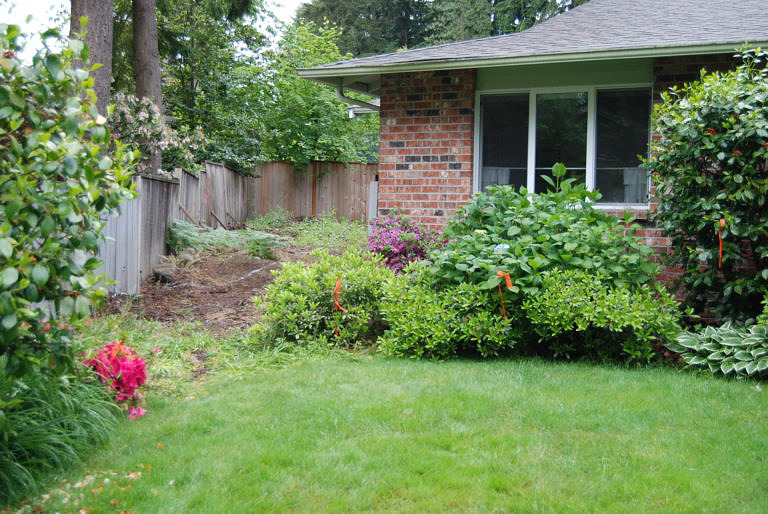 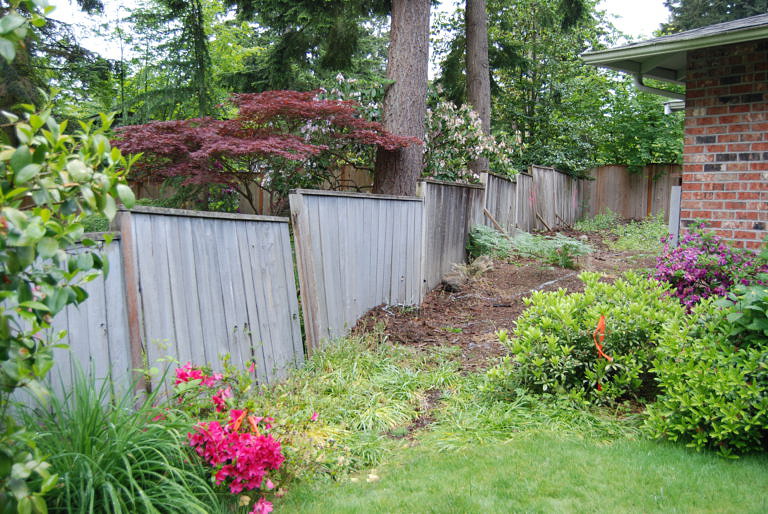 Rotten fence left against the house. The room on the right is the corner of Claire’s room. The bump-out is the master bathroom. 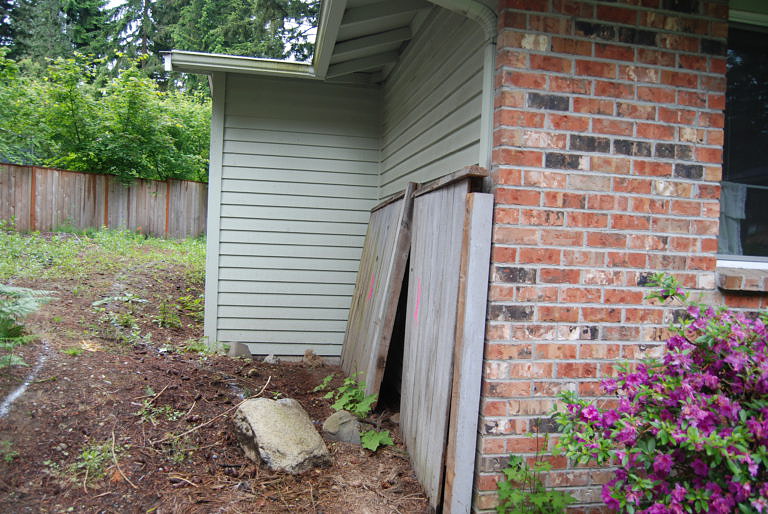 A million weeds, the siding all dirty because I hadn’t shoveled the dirt away from the house in too long, and the leaning fence in the foreground. The blondish fence straight back is the four year old one that will stay. 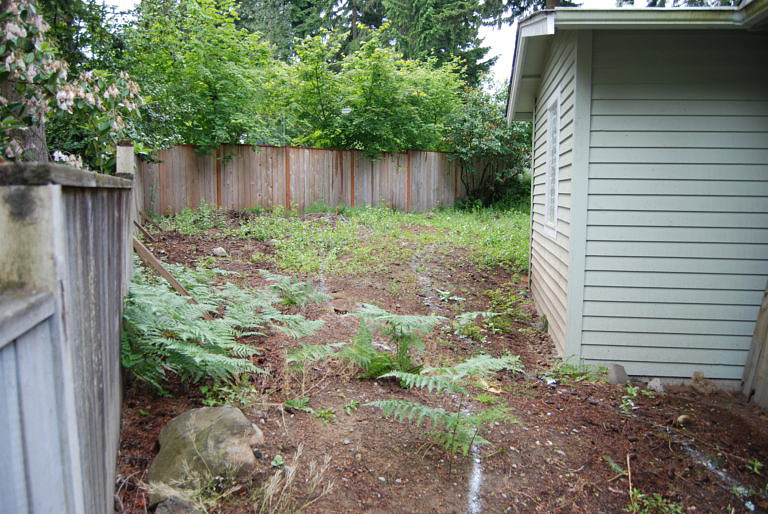 The triple window is the master bedroom, the bump-out is the master bath. You can see how high a hill the dirt makes and how much you look down into the house. Also, dirty siding, ten million weeds, etc. 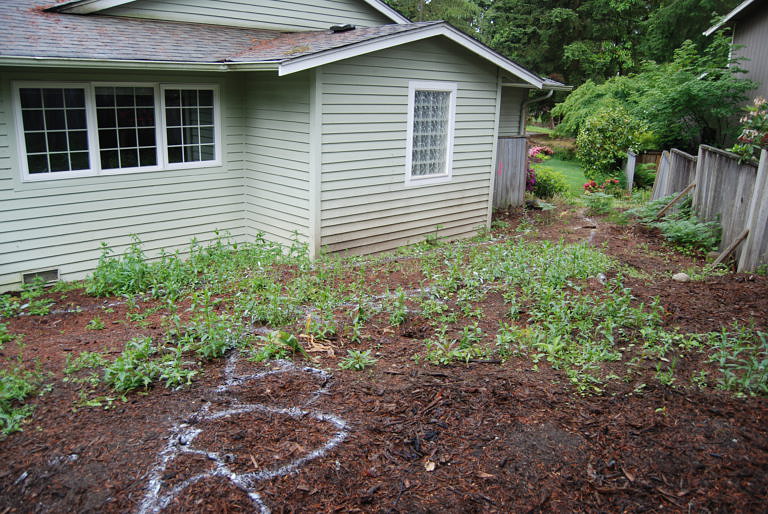 A close-up of the bump-out and encroaching dirt. 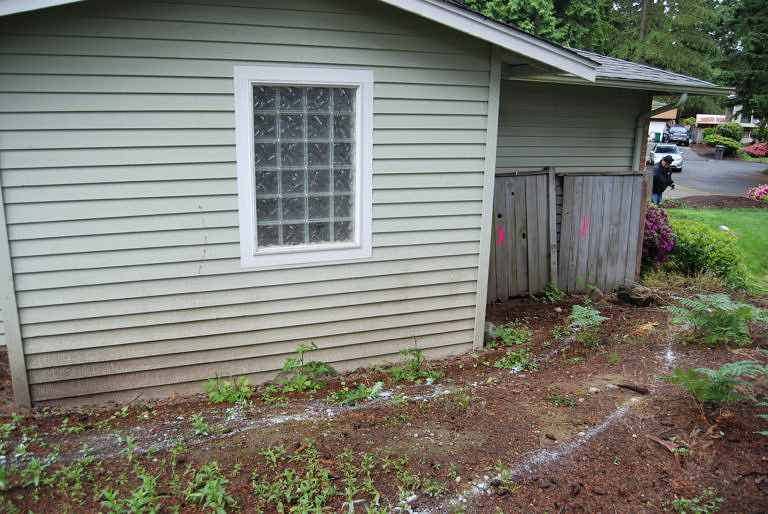 The family room addition, with the MBR window just visible to the right, and the cut through to the back yard visible on the left. The eve and roof is definitely low enough to bump your head against. 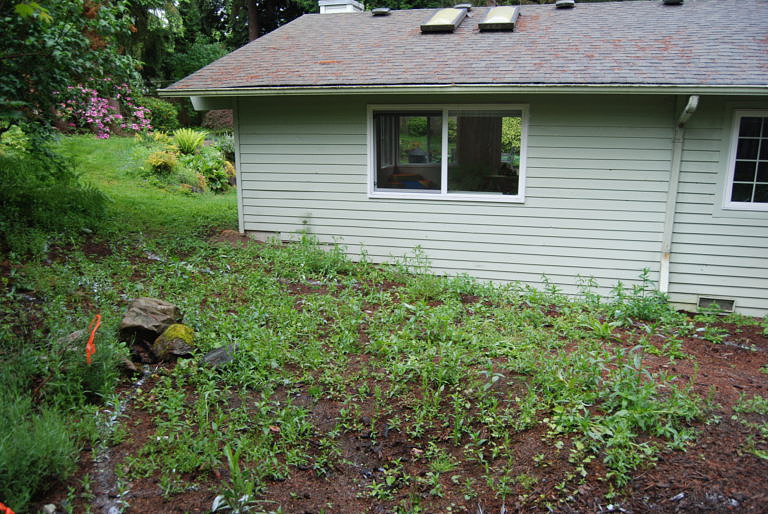 Looking from the back yard through the side yard — there is really a ton of space there, but all currently unused. 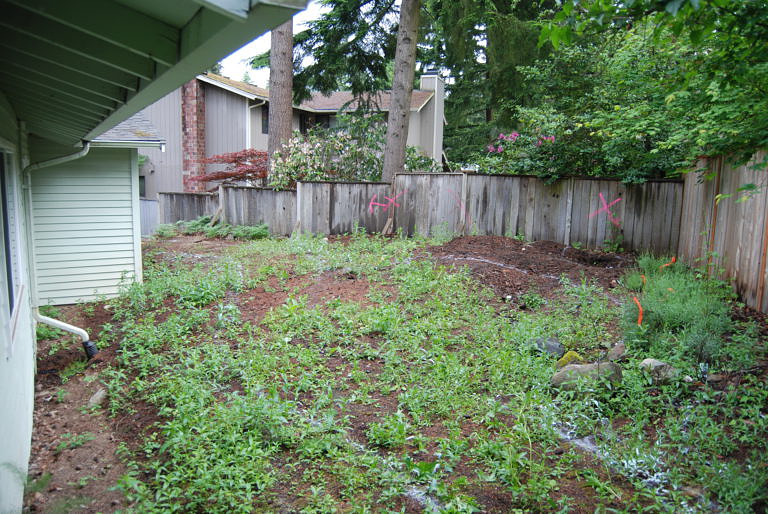 Excuse the weeds in the back yard, too (that’s what you get for being gone three weekends out of six in peak growing season), but you can see how much more groomed and attractive it is.) 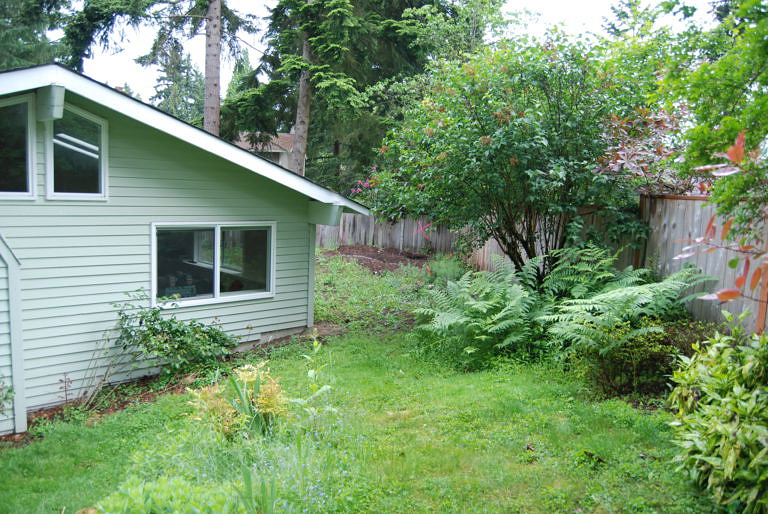 This fence is getting replaced. It turns out that our neighbors on that side are original owners and he helped build the original fence. We weren’t planning to replace the gate, but they were so sad that we called and asked Fence Connection to change the quote, somehow without incurring extra costs or change fees (nice). The trellis is pretty old and faded but still pretty and they wanted to keep it. Good fences, good neighbors, etc. 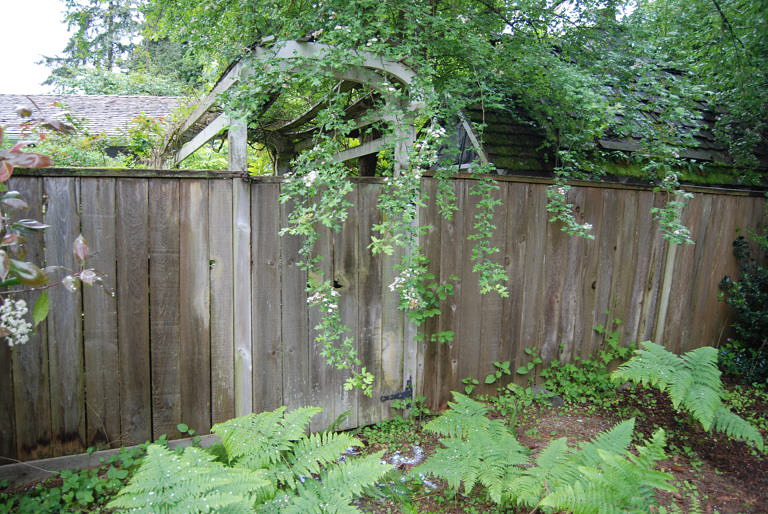 The fence in the back corner is almost completely falling over. I hate all of those holly trees, we keep cutting them back and they keep regenerating. I don’t want to dig out that stump but may have to resort to it. 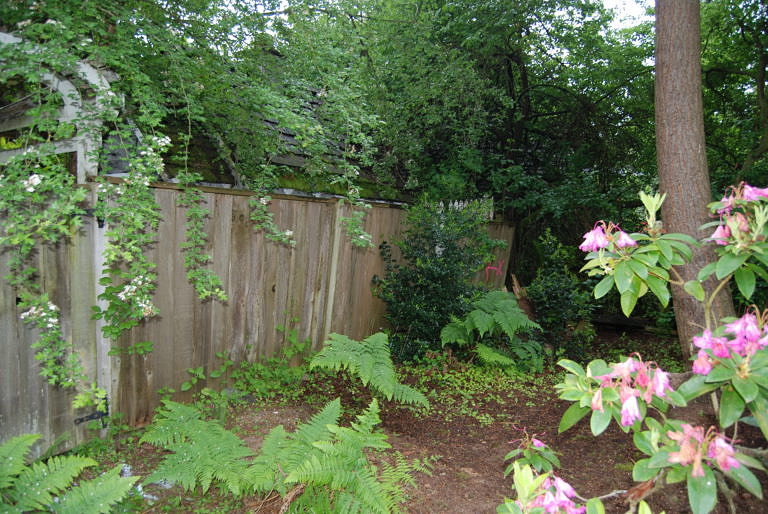 Tilty, tipsy, broken back fence. No doubt that this needed to be dealt with asap. 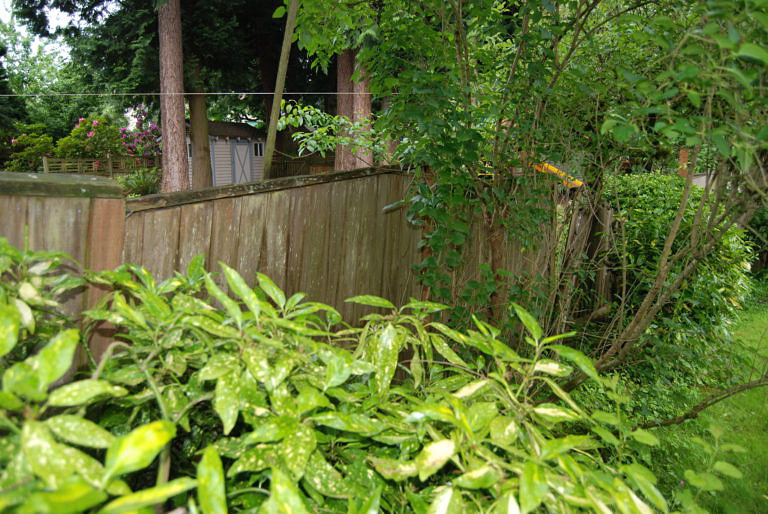 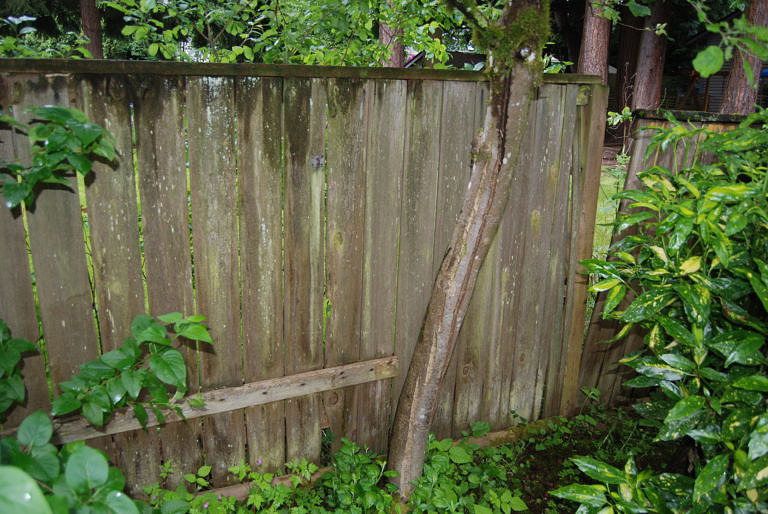 I love this vantage point in the yard — standing by the apple trees and the bird feeder, looking back across the rock wall. You can see the four year old fence that we’re keeping to the left of the midline of the photo — everything to the right is old, damaged, and getting replaced. 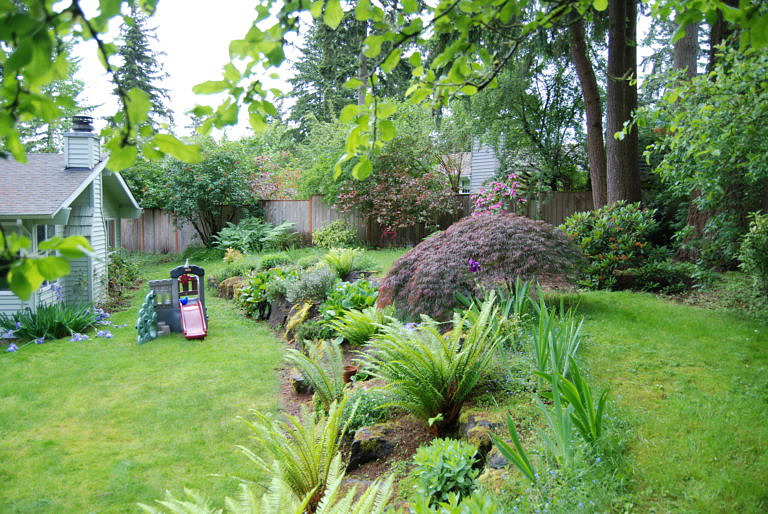 And I love this vantage point most of all — Kevin and the kiddo eating breakfast, while someone is busy banging on the glass trying to get my attention. 🙂 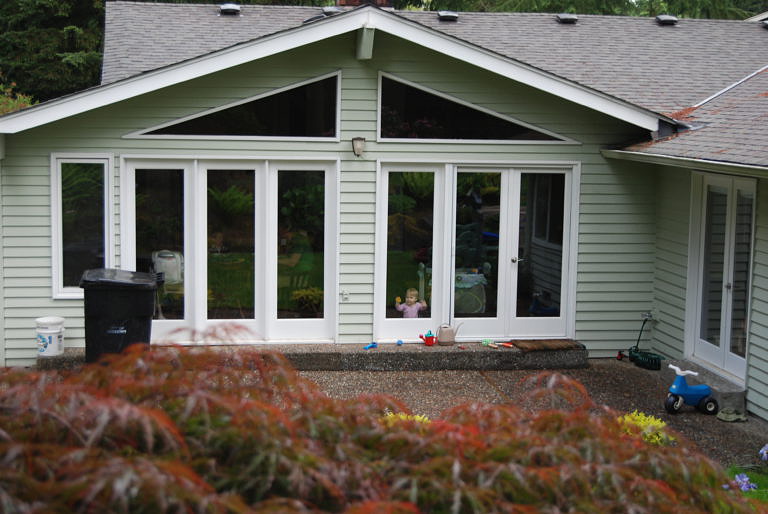 2 thoughts on “Side yard and fences: before photos”