After over a month of talking about it, we finally got the quarantine tank all set up and headed to the fish store to look for new corals and fish!! In our defense, the fish store’s weekend hours are terrible for us relative to lunch and nap. Given that the driving takes an hour and it takes at least that long to get livestock settled when we get home, we have to make a conscious decision to schlep the kids along and tank nap (no pun intended) if we both want to be there, which of course we do. Yuck.

Anyway, we bit the bullet on Sunday, and declared an all out fish tank day. Water change, getting the tank set up… Our lights from our old quarantine tank never fit the new one, plus the bulb goes on the fritz. I suggested the idea of doing an undermount light on our cabinet. (Snazzier light, better use of counter space, too, and easier to protect the electronics from spills. Everything’s on GFCI outlets, but I still don’t want to be able to accidentally slosh water near the power strip.) I love that I’m able to say something like that for aesthetic/safety reasons and Kevin’s able to run with all of the specs and find us the right lights. (Oh, man, the circuits and watts and color temperatures, etc. I have some of it written down, and could probably figure out how to look up the rest, but I genuinely appreciate not having to. It’s nice that his brain operates well at that level.)

So we got home, and he finished installing our new, removable LED panels. 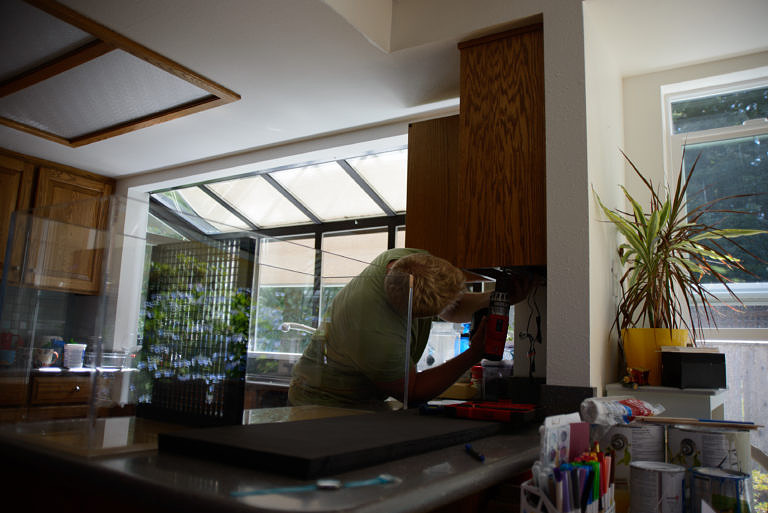 They are so fancy and shiny and little. I’ve never been a compact florescent fan, we dutifully installed them for years, but I think the hype about their lifespans was wrong, and they’re ugly colors of light, the environmental impact is questionable. But I can’t wait until the LED bulb thing gains a little bit more traction, these are smart systems and they keep getting better. 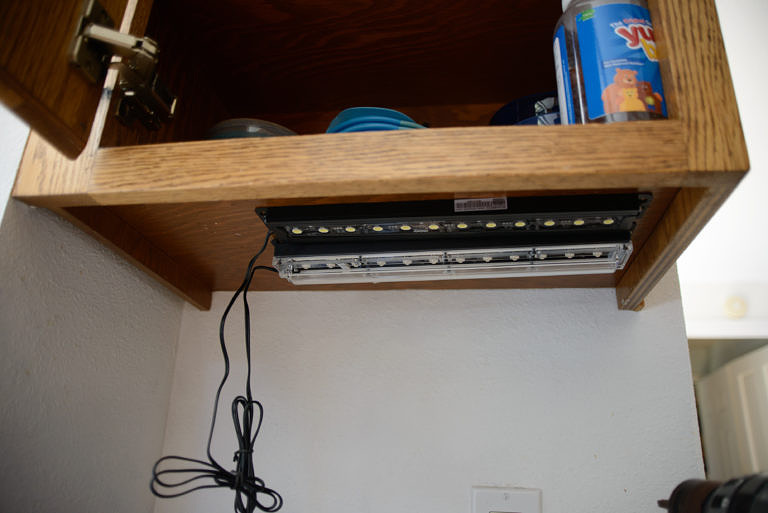 While we worked, Henry was very excited to be the first person to notice the enormous dead crab in our tank — you can see his upside down shell (with creepy light blue eyes) and two front claws… 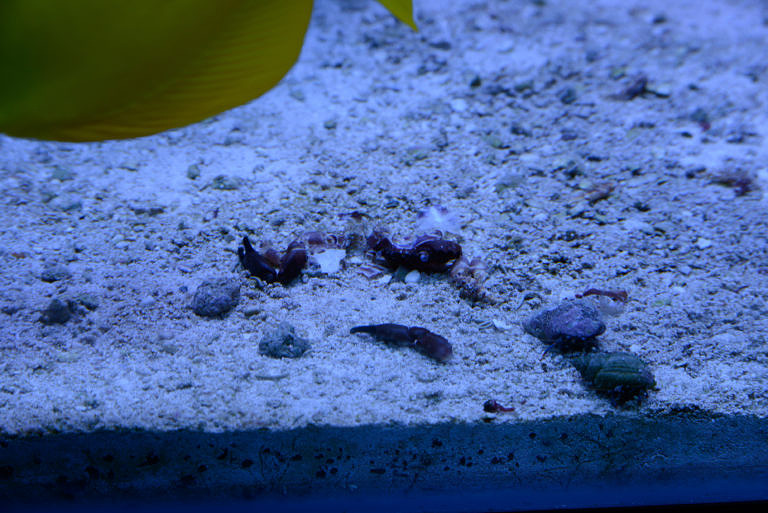 I’m pretty sure this is a dead crab, not a molted one (it’s a little bit hard to tell after other creatures in the tank start to scavenge, but usually when crabs molt we only see a claw or two, not the entire body together). And I’m really, really hoping it’s this one. The size seems right (you can see the tang for scale).

Here are the two tanks, all set up. The back tank is all cloudy because I just went and blew off the rocks and sand. 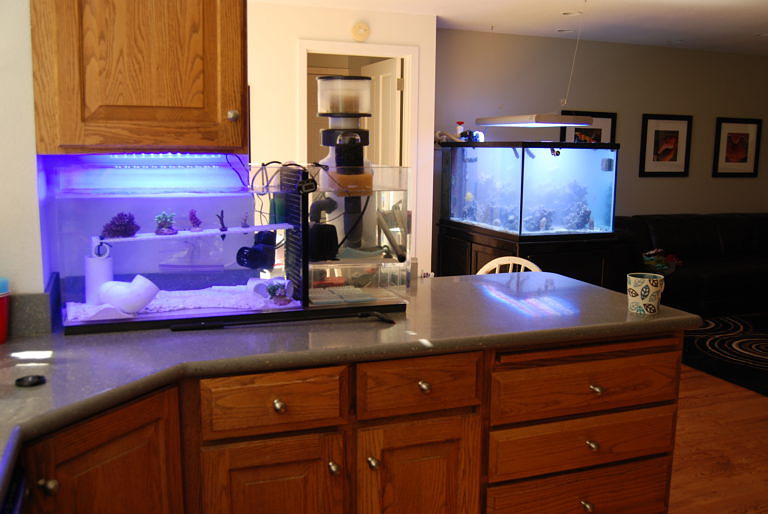 The next two pictures are sad — we were hoping to get something in the blenny/goby/jawfish category — the sand sifters, a lot of them are really pretty and they’re total personality fish, with perching and goggly eyes. The fish store was out of some of our leading contenders, but they had a few orange-spotted jawfishes. So pretty. 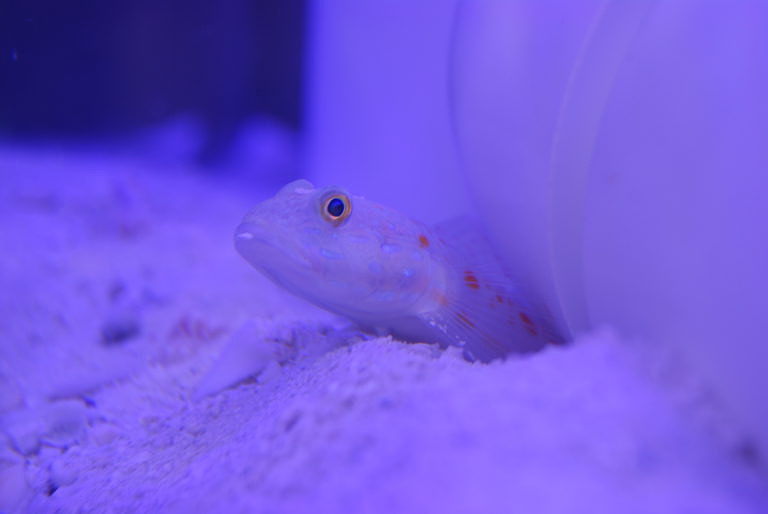 So we got one. The transfer to the tank was scary, he jumped out of the drip container (you drip your tank water into their bag water to allow their bodies to acclimate, but he was a floppy little thing and tried to flip off my hand, up my arm, and onto the counter. I scooped him up and got him in, with the worst adrenaline rush, and he seemed fine. He ate, he mostly hid but swam a bit… but on the second night he jumped and Kevin found him in the morning on the kitchen floor. So sad. We read a bunch afterwards (should have read beforehand, and the fish store probably should have warned us), but given that we don’t intend to cover our tank, we shouldn’t get jawfish, they are notorious jumpers. 🙁 Rest in peace, little dude. 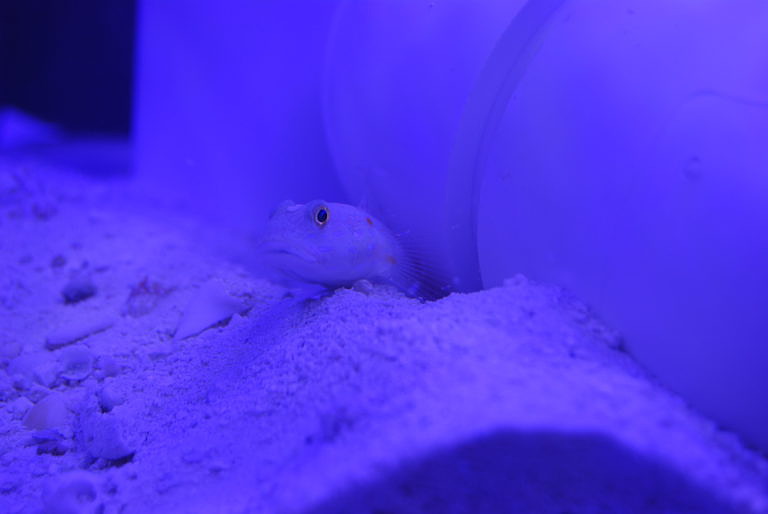 In less horrible fishkeeper news, the new corals are stunning and seem really happy. These photos are all terribly purple/blue, but I’ll keep them just because it will be fun to look back and see how much they grew if they thrive. We rigged a real coral tray for the first time — that white grid is from the lighting department of the hardware store, perfect for placing corals into. Kevin had to cut it down while I worked on cutting the PVC supports, a major chore with a zillion cuts, but it works perfectly. 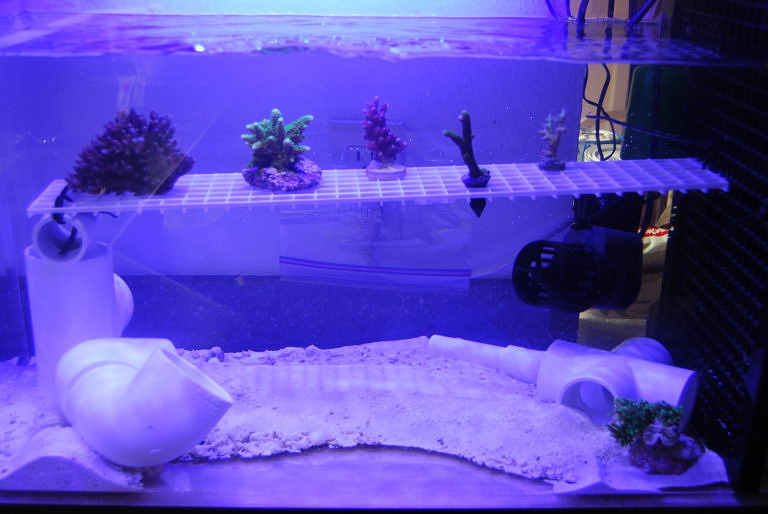 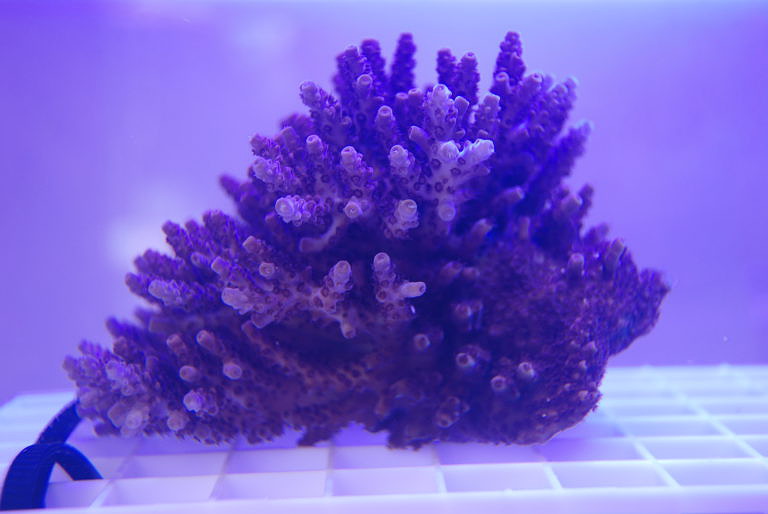 A lime green acropora. I LOVE this one. 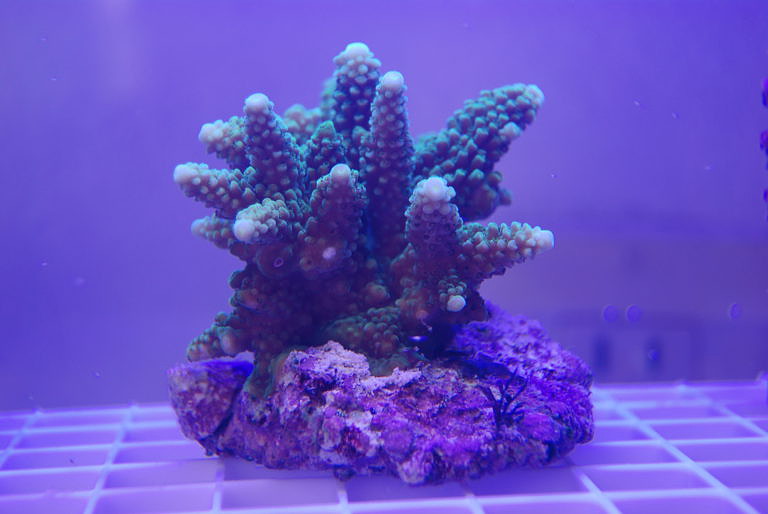 A slightly-purplish pink acropora (we think?). This one is interesting because in addition to the darker pink mouths, there are also longer white protrusions. It’s very pretty. Lopsided because this was a sideways-growing branch, not a vertical one. When we mount it in the tank, we’ll break off the plug (true for all of these) and turn it back to its original orientation. 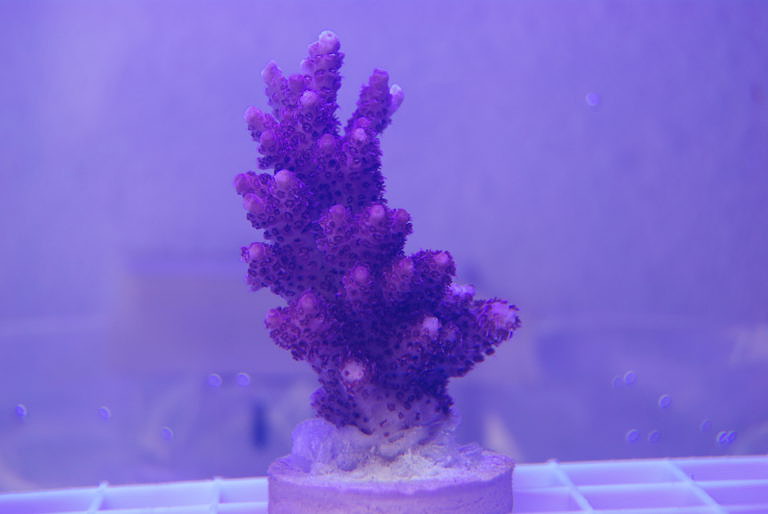 An avocado green staghorn. This is an awkward shape (and was cheap) because it’s a pretty recent frag, but it’s already growing well — those pinking spots grew and multiplied even over the next two weeks. I can’t wait to see what this one turns into. 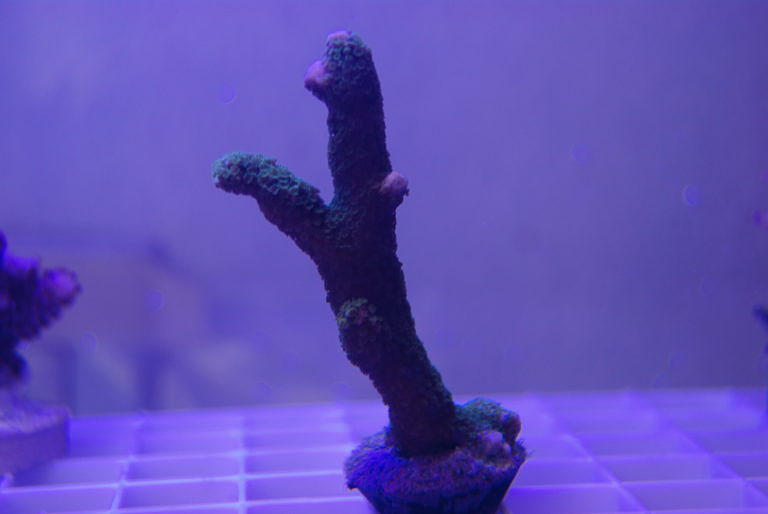 They called this a “Pink lemonade” birdsnest. Pink at the tips (new growth), lemon yellow for the rest. This is another one that I can’t wait to see in a few months or years. 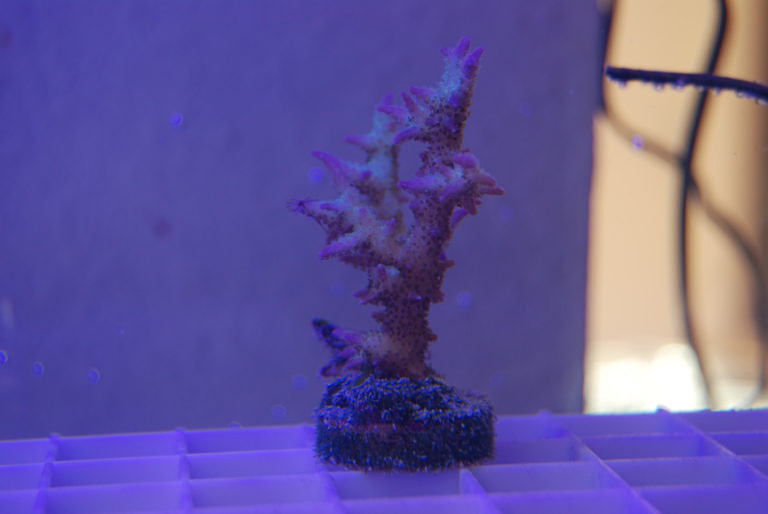 And, even though I was so glad to see the last one go, a torch coral. We need more movement in our tank, and this is a good start. We need a leather, too. Our xenia are very small, even though they pulse away. I’m hoping this one is happy. 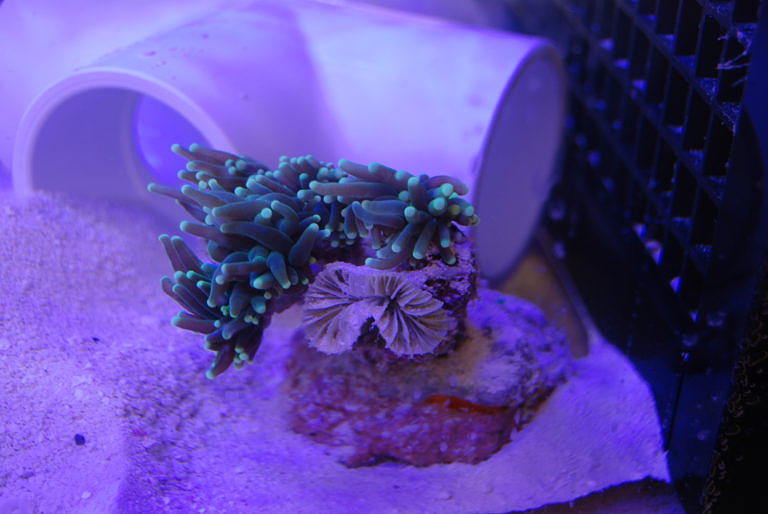