So, the rat update: Kevin bought traps on Tuesday and set them up, baited with peanut butter and pecans, after we saw a huge rat run into the middle of our living room and discovered that it had been leaping up onto counters to munch on our bagels. (eww!! eww eww) 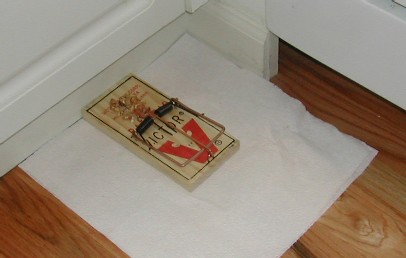 I’ve been wearing my tall boots around the house and only fleeing downstairs and straight back up when absolutely necessary. Last night I called my landlord, Jeff, just to let him know too. (The couple next door has a four month baby, etc… He needed to know.) Jeff earned massive amounts of appreciation by sounding genuinely horrified and aghast and then taking over the apartment for five hours today to rout out the problem. He removed the dishwasher to find that the plumbers had drilled their own holes instead of using the ones Jeff left for them, thus leaving large holes behind our cabinets down to the crawl space. They patched those, then went under the house into the crawl space (shudder) to look for more rat holes (shudder again), clean up droppings, spray foam everywhere to seal things, and make sure it all looked ship shape.

So, here’s to responsive landlords with high standards.

I feel so much better and have taken off the boots. 🙂 We’re leaving the traps up for a few more days, but now I don’t have to worry about huge jumping rats taking over my home.