My last Boston project was a modified booga bag. The booga bag measurements according to the pattern were supposed to be about 4.5″D x 7.5″W x 8.5″H, which seemed awfully small to me. I was envisioning something vaguely gym-bag-like, which could hold sneakers and workout clothes on the T (even though there is no T in Seattle. Ahh, denial). The bag I was using at that point was a small paper Crate and Barrel bag (I never said I was stylish), so I was thinking something along those lines, just sturdier and not a walking ad. The booga bag seemed perfectly shaped, long and thin, just a tad small. So I did some math (famous last words), knit like the dickens for my last week at home, and the bag was the inaugural load of laundry in my new Seattle apartment.

Unfortunately, what was perfectly dimensioned before felting: 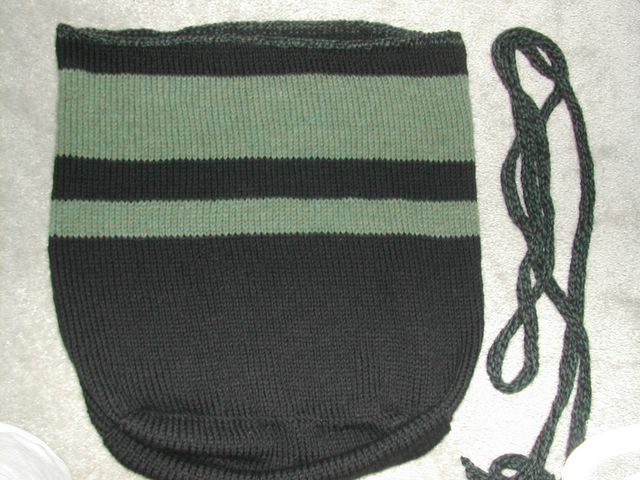 no longer could aspire to the same purpose afterwards. The finished bag measurements are 6″D x 10″W x 8″H — about a third of the height I was envisioning. The base is perfect, though, so I must have just spaced out on one little multiplication.

(Though it’s also possible that I just leave things in to felt longer and it sucks the height out of them. For example, look at my Sophie vs. the model.)

Rather than finishing the bag then, I let it languish on top of my bag of knitting things. I bought lining fabric way back in October, but didn’t follow through. Right before Sharon got here, I got out the sewing machine and made a lining, with a large interior pocket trimmed on the top with black piping. I finally finished sewing it in last night, added a lined cardboard square to the bottom for dimension, two snaps to the interior pocket, and fitting in the handles. Instead of tying the two I-cords together, as per the instructions, I sewed them together with yarn and a metal needle so that they would be less bulky. 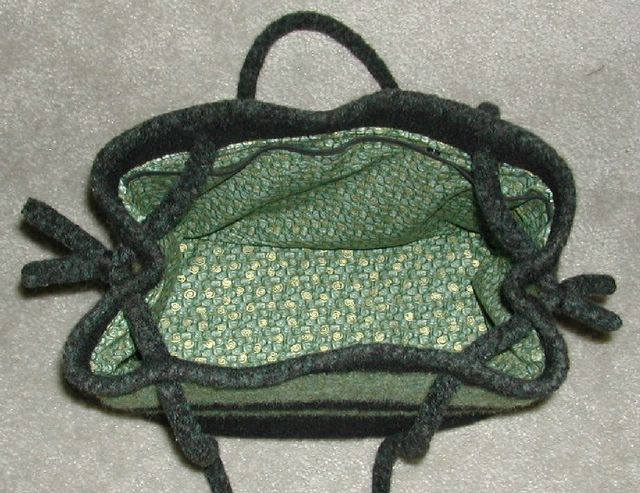 So, yay for finished projects!!

2 thoughts on “A Finally-Finished Project”