Guess what? Yesterday I got a job! To celebrate, Kevin and I went to the fish store. 🙂 We’re in the market for a yellow tang, but as the fish come in on Fridays and are largely gone by the end of the weekend, there weren’t any there to bring home.

Instead, we are now the proud owners of a silver tipped Xenia. It’s a tree shaped soft coral, and each of the branches look like eight-fingered hands. (Picture an ancient tree with a huge trunk and branches that start quite low to the ground.) The major characteristic is that it pulses, so each of the hands endlessly opens and closes, combing the water for particles. Watching it pulse is the visual equivalent of listening to siren songs — it’s nearly impossible to tear away. Utterly mesmerizing. When we first put it in the tank, all of the hands bunched up tight, though they kept moving the individual fingers slightly. Every now and then a hand would stick a finger out and then whip it back in. It looked like a cross between a sleepy kid rubbing its eyes and someone not wanting to get out of bed. Eventually it opened up and started pulsing — so wonderful to watch.

Given that freeze frame photos won’t capture the coolness at all, I’m including these with the caveat that I understand if your reaction is “huh.” The cool part is the motion, these are really merely proof that the Xenia’s in the tank. 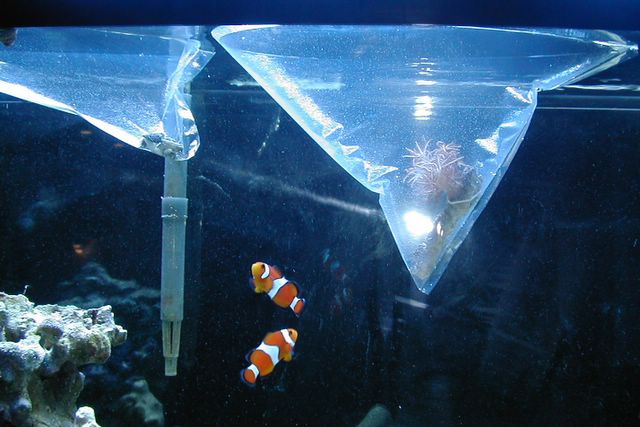 The clowns checking out our new pulsing xenia and hermit crabs while they temperature-acclimate in their fish store bags. 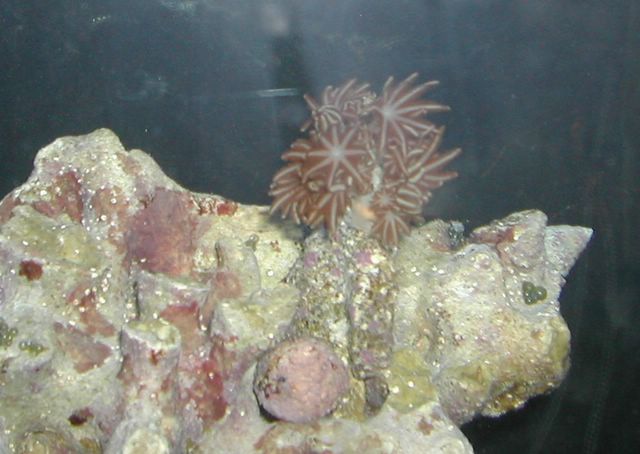 Xenia from the front, in the tank. You can see the pearl-colored trunk in between some of the hands. Also, the pink oval below and the white triangle to the far right are two of our 10 new snails. 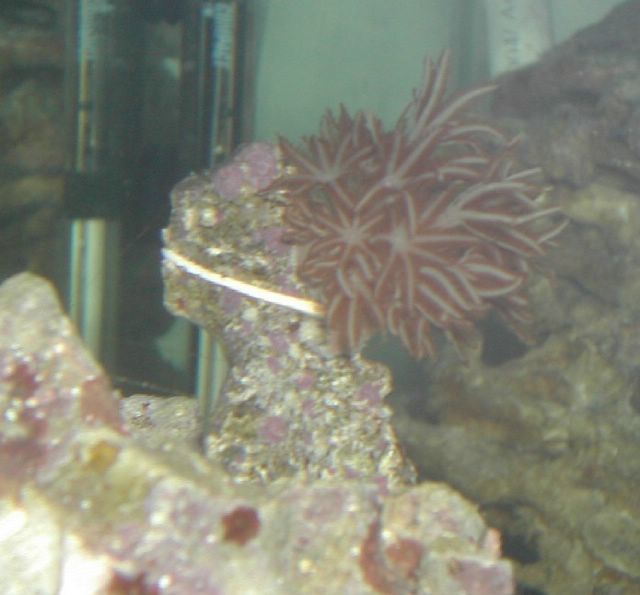 Xenia from the side. We lodged the rock fragment that it came attached to into a hole in our live rock as close to the lights as possible. There’s a rubberband on the fragment, but I don’t want to remove it for fear of injuring the coral.

Ours was captive bred, which makes me happy. I realize that most of the content of marine aquariums comes from reefs, but whenever it’s possible to have more self-sustaining, never wild, less traumatized species, that seems ideal (our clowns were also captive bred, our gramma and live rocks were not. I have to wonder how much the Gramma’s personality problems are innate and how much they’re a result of trauma from capture and transport.). I don’t know if that view is a result of too much “Finding Nemo,” but I’d still rather go for tank bred. I also hope that our aquarium will be able to support it. Xenia are supposed to be quite light-needy (we’re barely inside the bottom bracket of their tolerance) and rather current-adverse. If they’re happy, though, some hands will fall off, blow around the tank, and start a new xenia where they land. Some online sources have called them weeds. (Must be weeds in the same sense as the little sunflowers on the sides of the highway from Kansas to Idaho — too cool to count.)

Now that we have a coral, we officially have a reef tank! 🙂 Not as spectacular as, say, this, but we’ll build up eventually (though I can’t imagine the work to get the basement set up like he did, be sure to scroll down through the photos! and, note, the picture of the purple feather-like corals in the “Feeding” section shows a dense patch of xenia!)