My hands (particularly the right) have been freezing lately. It’s been in the 50’s here (no New England-style snow storms for us, sadly) so the weather obviously isn’t the reason. My hunch is that the culprit is a combo of knitting and mousing, and since neither of those activities seem optional, I came up with a design for fingerless mitts so that I can carry on with warm fingers. It’s based on the ragged old church mitten pattern I’ve been using since middle school (which feels like it was printed on cloth, the paper is so worn) and a trio of lace patterns from my new favourite knitting reference. I used a double eyelet rib for the underside of the arm, scattered double eyelets for the palm, and a fern lace panel for the back of the hand and arm. Below, pictures of the right mitt blocking and being worn (I’m really not a left-handed photographer, sorry that it’s blurry!):

The yarn is the remnants of the Barn Red Brown Sheep Cotton Fleece that I used for my hat and scarf set. This yarn has a storied past: I bought it in Boston after the first snowstorm, finished the hat, then started the scarf. On #5s, it took the better part of a year to finish and was the project that saw the Patriots through their Superbowl Championship, the Sox through their delightful season and series, and the Eagles & Pats through their stellar early seasons this fall. I brought these gloves (worked in the same yarn) to a friend’s place for the games on Sunday, and (not to claim credit) saw AFC and NFC wins for the Eagles and Patriots. Now I have to quickly finish the gloves before the Superbowl so that the yarn stays lucky — no matter what, it’ll chalk a loss for one of the teams if I’m still working with it. 😛

(Note: I grew up in New England but didn’t start watching football until Eagles-obsessed Kevin made me… the upcoming game is something of a conflict of interests.) 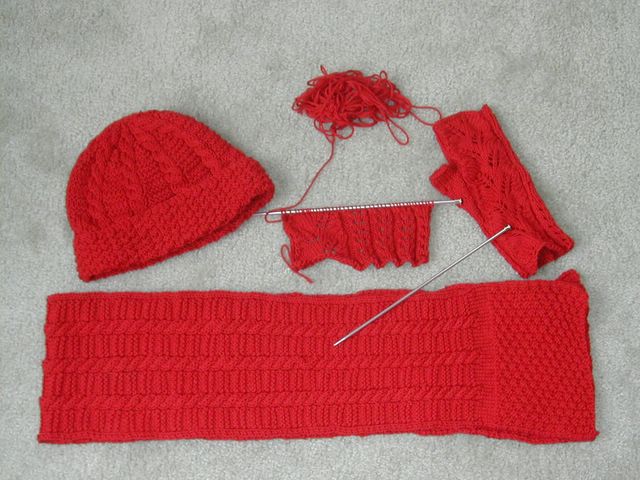 (The needle is pointing to the unintentional backwards cable from the final out when the Red Sox won the series. That mistake stayed in as a testament.)

And with that, enough sports superstition for one day.

It’s looking like I won’t have quite enough yarn to finish the second glove — I’m starting the thumb increases now, but the mess of yarn is dwindling. I’m debating between unmatched gloves or pirating yarn from the overly-long right hand — we’ll have to see how far the bit that’s left stretches.

One thought on “The last of the red yarn…”