I finally got a nice daylight shot of Tie One On without the flash. I’m nearly at the 8-inch decrease, so it feels like great progress. The colors are much more true here, though I still think you see the purple in the tape more than in real life and the gold less. 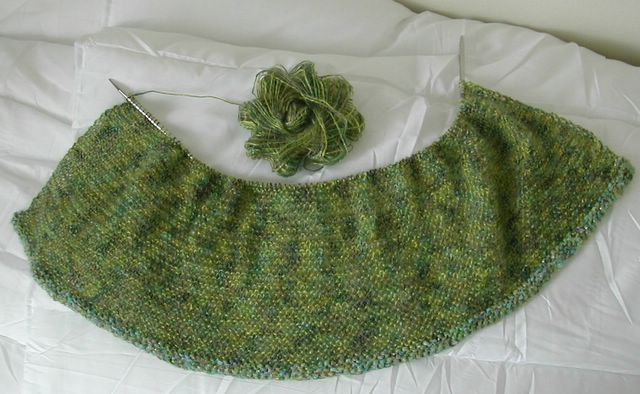 It’s posing on top of the new, lovely comforter that we got from Ikea this afternoon. This was my first Ikea experience, and it was god-awful. Saturday crowds, more expensive than I was expecting, and too much birch. However, Kevin got an ottoman for his office for $20 (a longtime want), and we decided to buy this comforter interior, which was $50 for the king size. It was the second cheapest of the ten they had, but we liked it the best (don’t you love it when that happens?). We spent some time trying to figure out what we were missing in the pricing, but finally gave up and felt like we’d earned it. I’m all excited about making a cover for it… Kevin’s slightly more skeptical, but I think it will work out brilliantly. The only sad part of the deal is that it will replace the quilt that my grandmother made me as a going-to-college present. The switch is slightly overdue, since the quilt doesn’t quite fit my queensized bed and I’m worried about tearing it, and the bedroom is so bright that it’s really starting to fade. Kevin suggested that we could maybe hang it in the dimmer bedroom downstairs, though, which made me more cheerful. 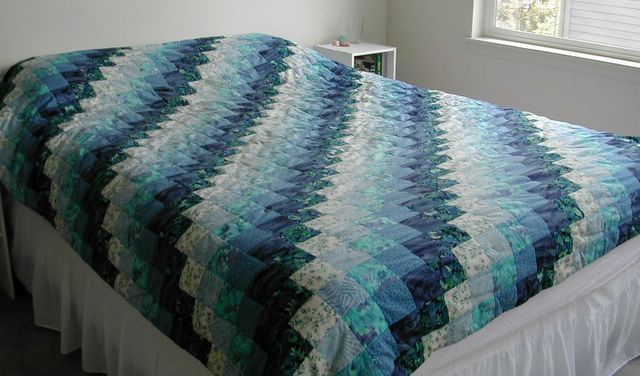 Now all that’s left is choosing fabric… 🙂 Something along this idea is what I have in my mind’s eye, but I haven’t run it by kevin yet. I don’t think I’m quite up for a whole quilt (anyone have a sense of how long one takes??), but I’d love to quilt pieces of it and use a uniform color for the rest.

One thought on “Crafting Along Nicely”