I haven’t posted about our zoos in ages. They’re thriving.

Clockwise from the top-left:
The original zoos are still spreading, and the two colonies have nearly merged. I’d love to be able to get a frag of these, but I don’t know how to get them to grow on another rock from the vertical face. Unsolved problem for now.

The orange zoos (right next to the gramma’s cave, so he came out to see what I was up to when he saw the first flash) have grown a lot. They’ve spread from the original rock onto the supporting rocks on both sides, so we may end up with three colonies if we cut the connections when we move to the new tank.

Our green zoos are still in the quarantine tank, and looking healthy. They’ve lost a lot of the green that we saw in the store, but I’m holding out hope that the brilliant lime will return once we get them under the lights in the main tank.

The sunflower zoos are also spreading like crazy. They choked out all but one of the yellow polyps almost a month ago, and rather than lose the last one, I cut it off with an exacto blade and put it in the quarantine tank in a tupperware to try to get it to attach to a new rock. The poor thing curled up tightly and looked miserable for the first few days, but finally attached to a rock fragment. I’ve been feeding it every third night or so since, and it’s looking very healthy now. I took it out of the tupperware two weeks ago, since it seems firmly enough attached to handle the current. It’s budded off two more heads (you can see the three in the photograph below. Sorry it’s so blurry — the fine fringe makes it very hard for my camera to focus.) and the plan is to keep in in the quarantine tank until we can get a larger colony. 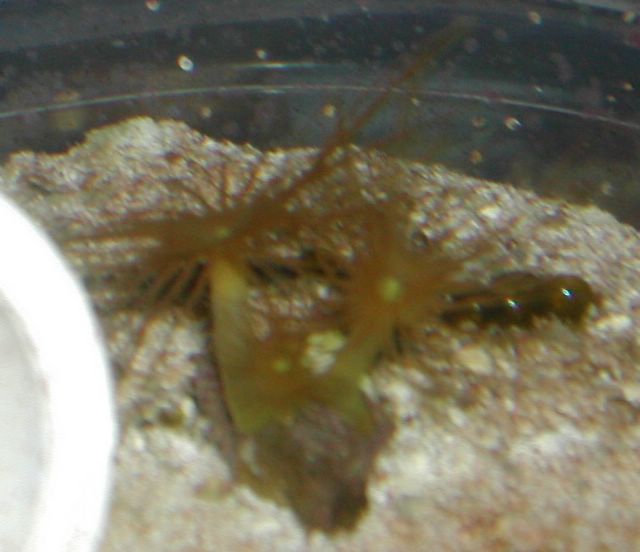