(note: because this got lengthy, a lot of the pictures are tiny. As usual, clicking on them brings up a bigger version.)

Last weekend was a very exciting one for the fish tank. First we went to the PSAS frag swap, which turned out to be really fun. The host had amazing corals all fragged out, and told us (to our surprise and skepticism) that our 4.8 watts/gallon of light was sufficient for some of his SPS corals. He was growing several under comparable light, and then said that the others that he had under his halides were actually bleached because the light was too bright.

So now, we have 6 new corals. Three went straight into the tank because they needed to be superglued onto rocks. The flat two (orange and yellow) are Montipora Capricornis, which are now only about 3/4″x1-1/2″, but which ultimately will grow into layers of plates or spiraled cones. These guys are supposed to be pretty neutral and benign corals, which is good after all of the stinging and chemical-producing ones we have in there now (torch coral, polyps, and zoos, all of which can kill each other and make humans sick if provoked or placed too near to each other).

The blue one is a bit of a mystery to me right now. I think it’s an acropora (staghorn?), and the color is amazing — a pretty baby blue. My camera’s flash picks up more of the turquoise. The brown bits are little mouths, and again more visible with the flash than in real life. Paul (the guy selling them) also showed us corals that looked like brown sticks with slight blue at the tips in another tank. Apparently the blue disappears under the bright metal halides. Nice for us! This will grow up branching like this one. 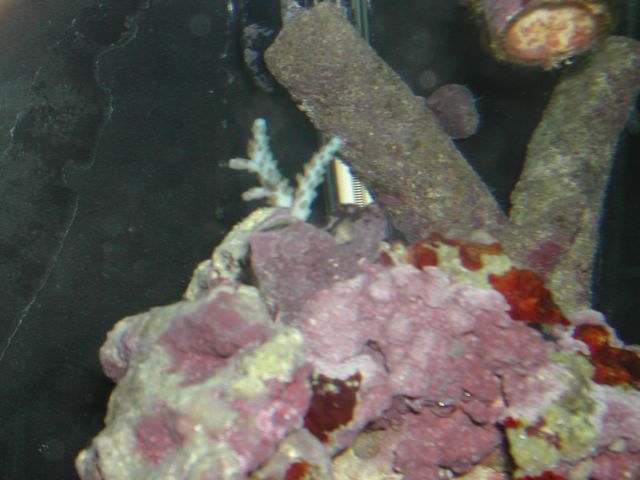 I love the new colors. Our tank until now was all orange and purple, so the blue and yellow both introduce an entirely new palette. It’s amazing.

Our other three are in the quarantine tank. The first is a silver pom-pom xenia. I think we fell for this one because the color (a silver-lavender) was so pretty and it looked like such a cute pulsing ball when compared to our current xenia. However, a week later and it’s already growing like a weed (see the picture on the right). You’d think we would have learned our lesson the first time. 🙂

The second is a leather. When it’s unhappy, all of its tentacles shrink in and it really does look like a wrinkled, leathery mass. But, when it’s happy, it sends all of them out to sway in the current. They’re translucent and it looks amazing.

The third is what I’ve tentatively identified as Montipora Digitata. When happy, it becomes covered with velvety mouths, when not, the mouths retract and leave a smooth brown surface. This one will also be superglued to a rock, but is in quarantine now because it also came with a colony of aiptasia (a nasty stinging brown anemone — small but quick-spreading). I cut off the base of the rock that the aiptasia was hosting on, and it’s been in the quarantine tank since. After looking unhappy for a few days, it’s coming back and we’re seeing some new growth. 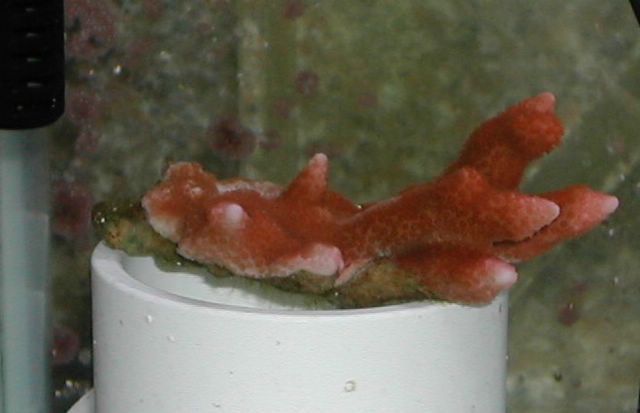 After buying all of the corals, we had to head to the fish store for food, bulb replacements, etc. While we were there (for an hour and a half… We do enjoy our trips over. :-)), we finally found a yellow tang!! He’s just a baby (still has the paler yellow vertical stripes even), but has quite the personality and seems at home in the quarantine tank.

We had to take down the black backing on the tank because he kept trying to fight with his reflection. It took a solid half hour to figure out what was going on when Kevin and I got home from work — our first guess was stray electricity in the tank from a pump or heater due to the jerky way he was swimming. Now that the backing and enemy tang are gone, though, he’s all happy again. We’ve been feeding him Nori (seaweed, available in the supermarket for cheap!), which he likes, and he also goes racing after the Cyclop-eeze that we give the leather, which he *loves*. I’ve been trying to get a picture, but without much luck, as you can see above. He’s very fast, so I need the flash or he just comes out as a blur, but the flash scares him. I’ll wait a week and see if he’s gotten braver. 🙂 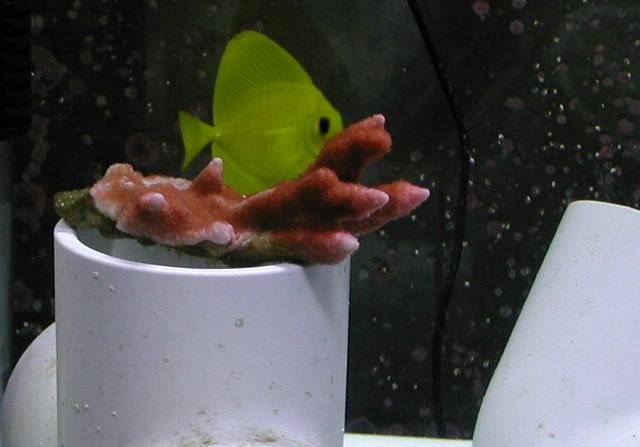