I spent the weekend at Microsoft’s Puzzlehunt, with a group derived from the new Brown dinner crowd. 🙂 This was my second Puzzle Hunt, and added to one Intern Puzzle Day and one Puzzle Safari to round out my total lifetime microsoft-puzzling experience. The idea behind the event is that the winners from last year (the awesome “Everyday Heroes”) earn the “honour” of creating two days worth of puzzles, and roughly 50 teams spend the weekend proving their mental muscle. Lemon of Troy finished a mighty 36th, thereby leaving a safe margin from being forced to write next year’s fun. Despite the reality of sitting in a conference room surrounded by computers eating takeout on a weekend, I had a lot of fun. 🙂

The puzzles are multipart and usually require recognizing lots of different overlaying patterns. This year, there were a few on Semaphore and Braille, plays on the fifty states, ciphers, songs from soundtracks, ingredients from beverages from the Microsoft fridge, word games, scrabble scores, quasi-famous dates, etc, etc. My favourite was a huge 5×5 logic grid based on a map that took me two hours to solve, and then required spelling out the solutions to each to find a location on a another made-up map, then translating that to a real campus location, then bringing the first map to that room and looking at it under the black light to get the answer (“blue screen” :-P).

I know there’s a share of previous years’ puzzles somewhere, but all I could find was year 2.

People on my team were impressed by my pencil crayon skills in solving the following puzzle (they even tacked it to the wall!), so I figured I’d post my acheivement: 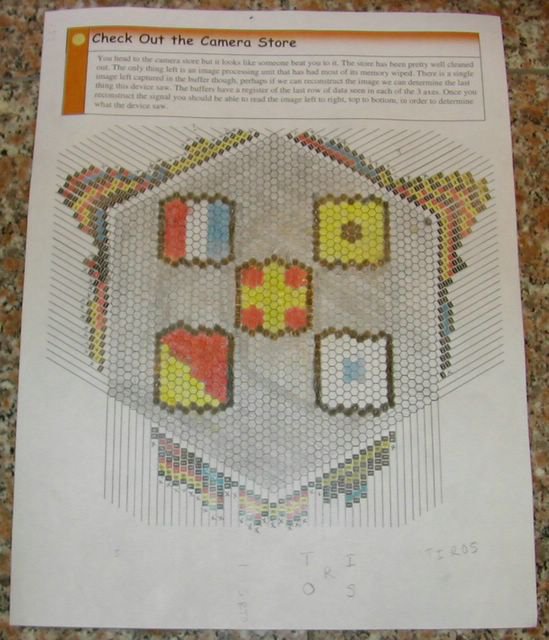 The puzzle had three edges with sequences of numbers in colored circles and the center was initially a blank grid of hexagons. The trick was to figure out the pattern represented by the numbers, color it in on the grid, and then realize that they were nautical flags that spelled the answer: “TIROS”. Not bad for 4:30 in the morning. 🙂